Last week I was in the audience for the Q&A special that aired following the documentary about Priscilla Queen of the Desert, Between a Frock and a Hard Place. I asked a question but it went very much unanswered by the entire panel, especially notorious homophobe, Fred Nile. My question was meant to be one of positivity and progress, about how our community can share the best of our experiences with mainstream society. Unsurprisingly, this went over his head and, if I am honest, I don’t think the rest of the panel addressed it well either.

So, I decided to answer the question myself, and Daily Life were kind enough to publish my thoughts on the matter. Read my article, What Fred Nile can learn from my queer family, here.

As an aside, I had started writing an article about the experience of sitting in the audience for LGBTQ&A. I was going to write about the Nile supporters in the audience who radiated hate, about sitting next to and around people who hate my ‘lifestyle,’ about how angry I felt watching the panellists have to listen respectfully while Nile (and questioners in the audience) said such awful things.

The Daily Life editor encouraged me to focus not on my hurt and anger but on the original premise of my question, on what positive things children from queer families can offer the wider community. As an emerging writer, working with editors who help me take my writing to the next level is a privilege. For that, I am very grateful.

Here’s a photo of one of my Mothers and I reacting to Nile: 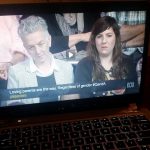