Will Kostakis – My Father Haunts Me

When Will’s career as an author takes off at just 19, he writes many stories about his father’s absence, but it would take a few more years before he considered trying to find him.

Will Kostakis is a writer of all things, from celebrity news stories that score cease and desist letters, to tweets for professional wrestlers. He’s best known for his award-winning Young Adult fiction. His first novel, Loathing Lola, was released when he was just 19. His second, The First Third, won the 2014 Gold Inky Award and was shortlisted for the Children’s Book Council of Australia Book of the Year and Australian Prime Minister’s Literary awards, among others. The Sidekicks was his third YA novel, and his American debut and recently published, Monuments, his fourth novel. 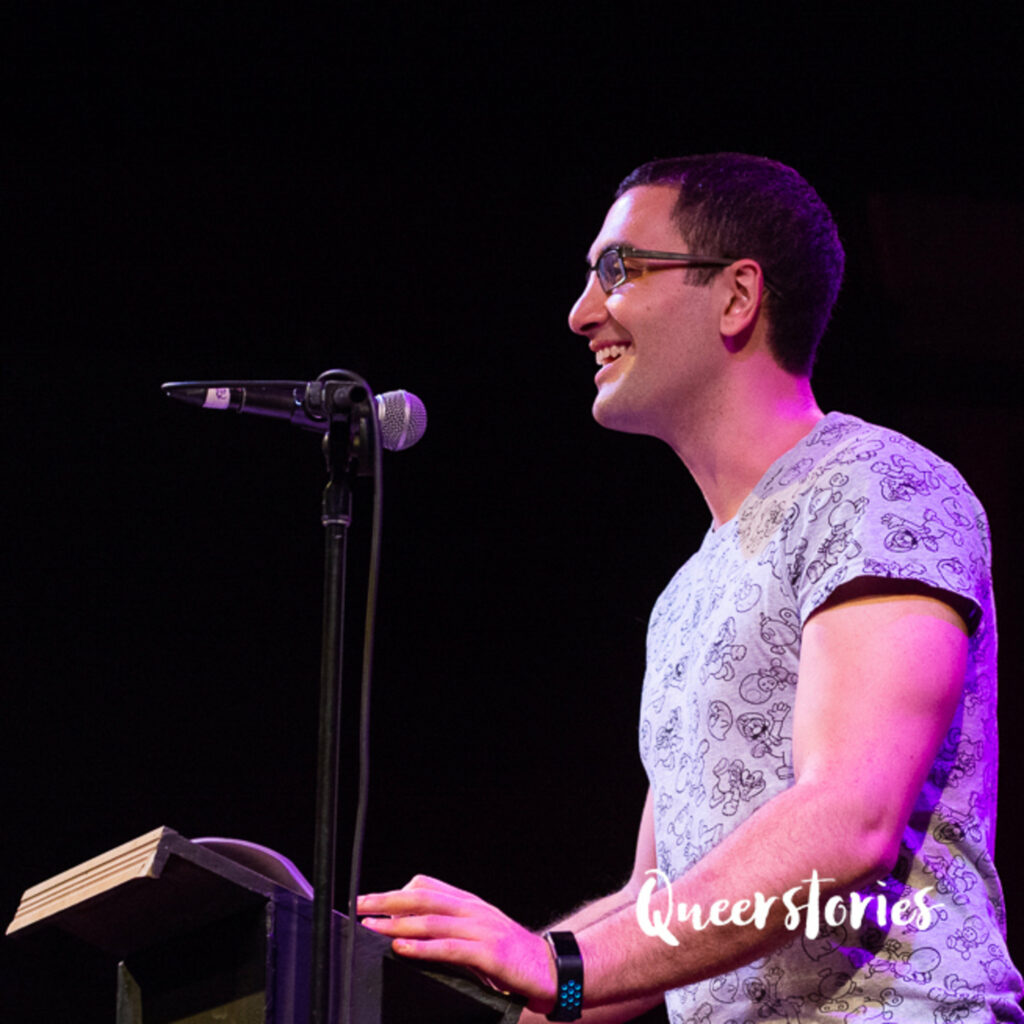 This week, Will Kostakis is a writer of all things, from celebrity news stories that score cease-and-desist letters, to tweets for professional wrestlers. He’s best known, though, for his award-winning young adult fiction. His first novel, Loathing Lola, was released when he was just 19. And his most recent, his fourth novel, is called Monuments. You should look them up.

Will performed this story in Sydney and at Mudgee Readers’ Festival last year.

I see him wherever I go. In the faces of passers-by, in cars. He’s the tightening of my chest when a white truck that could be his drives past. He is everywhere and nowhere.

Even my writing career, which blossomed in his absence, is haunted by him. My mother’s father was the one who waited outside newsagencies before they opened to buy me fresh lined paper as a kid, but my father was the reason I was sending manuscripts to publishers before my 13th birthday. When my parents’ marriage ended, our house was a shell, half-renovated; the ceiling was a mess of wiring, and the kitchen was a leaky fridge, and a sink propped up by a plank of wood.

There used to be an aluminium bench and some chairs. But to give you a measure of the man that was my father, when my parents divorced, he collected his half of the furniture, as was his right. Then, he returned to halve it again, claiming that he hadn’t yet. He took our bikes, our boardgames, and the aluminium bench he fashioned in his factory with the accompanying chairs.

Mum worked hard, too hard, to keep us in school and to fill that house. One night, she collapsed walking up the stairs to her bedroom, and instead of working less, she sent us to live with our grandmother so that we wouldn’t see the toll it took on her. Slowly, she made that shell of a house a home. She installed a ceiling. She bought furniture to replace the pieces my father stole, and then some.

And I wrote. Every day. From Year Seven, I sent manuscripts to publishers, each time convinced that that manuscript would be the one to earn a JK Rowling-sized advance and mean Mum didn’t have to work as hard. That drive that saw me earn a book deal in Year Twelve, that was me trying to step into my father’s absence and provide, or at least, ease the burden he had placed on my mother’s shoulders.

His absence didn’t just inspire my drive, it inspired my output. My first novel began its life as a thinly veiled Parent Trap-style revenge fantasy. In an early draft of my second novel, The First Third, a character tracked down their absent father and said everything I wished I could have said to mine. I remember my then-editor Clair Hume, congratulating me for getting it off my chest before suggesting I cut the scene. When I asked why, she asked if I’d ever tracked down my father, if I’d ever had that closure. I said no. I cut the scene.

I toured the book. Students who studied The First Third tried separating fact from fiction. Am I Billy? Is the mum in the book my mum? The grandmother? The brothers? Did this all really happen? One afternoon at a school in Sydney’s outer suburbs, a hand shot of up in the middle of one of my talks. The student asked if I had ever tracked down my father. I said no. Another hand shot up. That student asked why. And I didn’t have an answer. I was a quote-unquote grown man now, mid-20s, I was perfectly capable of finding my father and expressing everything I wanted to. I didn’t need to do it in fiction.

I guessed his address. Suburb. Street name. House number. All of it. Unbelievable, right? I mean, I could say I worked at a polling place one election, was entrusted with a tablet featuring the electoral roll, searched my surname, miraculously found his entry, and memorised his address, but that would’ve been a crime. And it didn’t happen like that. I can’t overstate how much it definitely didn’t happen like that.

So, I had his address, but I wasn’t going to show up on his doorstep. I typed his address into Google, and Google returned a White Pages knock-off that featured his phone number. I sat on the edge of my bed and dialled. One ring. Two rings. My heart thumped. My chest was in a vice. My brain stung. I hung up, set my phone down and took a breath. And another. I was trembling.

I refused to believe a man I hadn’t seen in over 10 years still had this much of an effect on me. I dialled his number again. One ring. Two rings.

‘Hello?’ I didn’t recognise the voice.

‘Hi, I was wondering if I could speak to Stephen please.’

‘Hello Stephen, this is William …’

‘I just think it’s about time we had a chat. In person. Does Thursday night suit?’

It didn’t. We tried for the following Tuesday. He cancelled on the night, rescheduled for Friday. He called when I was walking to the train station to change the venue and push our meeting back an hour. He told me to meet him at Rockdale Station. He waited by the turnstiles. I walked right past him, but he caught the edge of my eye. I turned and stared down an older, semi-sundried version of myself. The same curly hair, the same stubbly beard, the same posture. Even though I had built myself in his absence, I had become him. He was inescapable.

I said hello. He said he thought I’d be taller. That’s what he led with. And now that I was closer, I could see he hadn’t even changed into a clean shirt after work. I hadn’t even been worth a quick tidy.

He walked me to a nearby Thai restaurant. We took our seats. It was surreal, sitting opposite him as he browsed the menu. He was alive. Every day and every night he didn’t make contact, he lived. He visited Thai restaurants, browsed menus… He cleared his throat and said it was nice to have me back after ‘my bitch mother turned me against him’.

I was stunned. That was how he was going to start. I didn’t flinch. I told him I didn’t remember her picking up my brother and throwing him against a wall.

I knew. He wasn’t aware, but every time his mother was sick, my mother found out, and she snuck us into the hospital to visit her. Mum took me to the nursing home to see her just before she died. We resolved everything. I was here, at dinner with my father, in case he got hit by a bus tomorrow. And I told him so.

He wore my words like a slap, and I teed up the rant that I’d been slow-cooking for years. I was ready for some poetic evisceration. I managed three sentences before I realised he wasn’t worth it. I didn’t want to itemise my grievances, list all the ways he’d hurt me, because he wasn’t worth the words. He didn’t deserve the satisfaction of knowing that he’s responsible for any part of me.

There is only one person in the world who deserves that satisfaction. As much as my father has haunted my life, he has never cast a shadow over it, because I have sat perched on one woman’s shoulders and she bore the brunt of it so I would never go a day without feeling the sun on my face.

My mother doesn’t haunt me, she never left.