Brenna remembers her desperate campaign to convince her mothers to give her a sibling.

Brenna Harding is an actor, board member of Wear it Purple, founder of Moonlight Feminist and LGBT rights advocate. She’s performed in productions for Melbourne Theatre Company, Sydney Theatre Company, The Old Fitz Theatre, Belvoir St, Malthouse and Griffin Theatre Company. She is best known for her role in Puberty Blues but you might have also seen her in Secret City, The Code, My Place, Packed to the Rafters, A Place to Call Home and Netflix’s Black Mirror, directed by Jodie Foster. In 2012, Brenna won the Logie for Most Popular New Female Talent and in 2014 received the Marie Bashir Peace Prize for her contribution to social justice. In 2018, Brenna was a Heath Ledger Scholarship finalist. 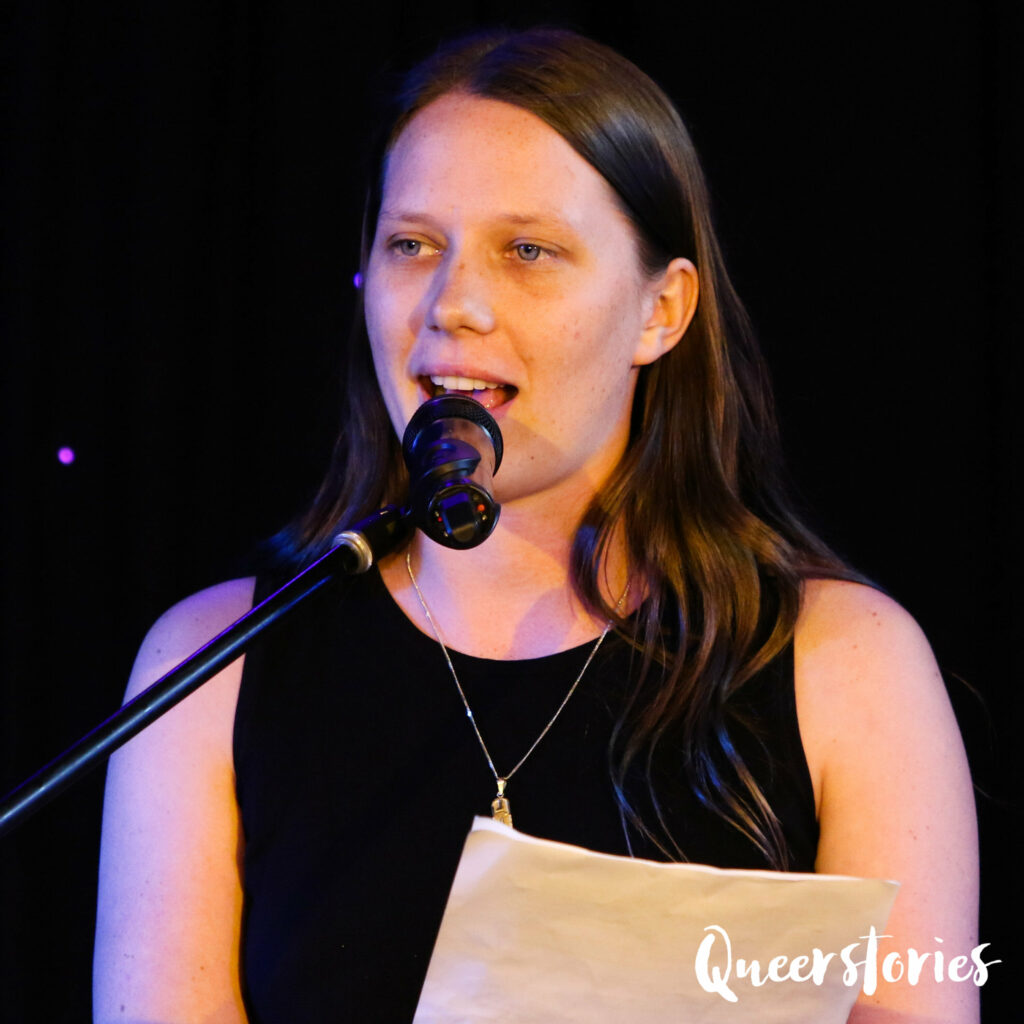 Brenna Harding is an actor, board member of Wear it Purple and founder of Moonlight Feminist. She’s performed in theatre productions around the country but is perhaps best known for her role in Puberty Blues. You might have also seen her in Secret City, The Code, My Place, Packed to the Rafters, A Place to Call Home and Netflix’s Black Mirror, which was directed by Jodie Foster. In 2012, Brenna won the Logie for Most Popular New Female Talent and in 2014 received the Marie Bashir Peace Prize for her contribution to social justice. Brenna performed this event at Queerspawn, a queer families themed event I hosted at Midsumma in 2020.

For most of my life the thing I’ve wanted most is a little sister. The preschool teachers told mum it was a phase, and she should get me a baby doll to sate my obsession. I lugged my baby born everywhere, named her, dressed her up, slept with her beside me, and it wasn’t till one day in the car when we drove past the hospital where I was born that the plan unravelled. I started crying, and when mum asked me why, I told her it was because my baby born didn’t grow.

The whole lesbian mothers thing made the chances of an accidental sibling incredibly slim, My mothers were unlikely to have one glass to many, find a donor, draft and agreement, wait 3 months for HIV testing and self-inseminate, so I knew I had to take matters into my own hands. So, began what must’ve been the most exasperating decade long campaign. The backbone of the strategy was in its simplest form, asking. I would do this in many different circumstances and ways. I understood how to make the piece de resistance of any fights or arguments the fact that my parents had denied me what I believed to be a basic human right.

I got creative with my approach. When I was 8 we were introduced to collage and I decided it would get the message across if I covered my ornamental collage box with various baby faces. I gifted my mother this box for her birthday, activating the unspoken, parents must love their child’s art clause, for the purposes of my mission.

I wasn’t just relying on the power of persuasion either. I needed all the outside help I could get, so every single birthday, four leaf clover, and shooting star wish was the same: I wish for a little sister.

One December, I realised what I had to do, it dawned on me that to truly convince my parents of my commitment to siblinghood it would take the most self-sacrificial act I could think of. That Christmas I handed over my list for Santa and the only thing on it was: Number 1 A Little Sister. I have a vague recollection of later drafting up an extra list, just because you know, babies take a long time to grow, and it’d be silly to miss out on an iPod Nano in the interim.

The final stage of the campaign though, came on our European holiday when I was twelve. I don’t know at what point I decided that the winding canals of Venice were the ideal backdrop for me to start the final aggressive push but it was clear to my young mind that if I really wanted someone to do something, I should go about ruining their one big annual break. I adopted a persona that had all the gloom of Eyeore, cynicism of Daria, and general unpredictability of a toddler.

On one of the final days of our holiday we were in beautiful seaside Cinque Terre and not seeing any positive results from my endless nagging I felt hopeless. My parents were just annoyed, and wanted to have a least one nice moment. The questioning and gloominess had surpassed being a performance and now all that was left was my genuine sadness that I would never be a sister. I locked myself in my tiny room, with only a magazine-sized window, and for the final days of our holiday read a left-behind copy of James Patterson’s murder mystery, 7th Heaven.

I gave up my mission after that holiday. The next year I started high school and conceded that it was too late now- I had missed my opportunity to convince my parents of my commitment to the cause. One of my best mates came into school one day and told me her parents had accidentally fallen pregnant, and after 13 years of only-childdom she was getting a little sister. I wanted to be happy for her, but when I got home I just cried.

I had been playing French Horn since year 5, it had been my last choice but Ms Cathy Chan had needed one and that’s how I was landed with the most awkwardly shaped and uncool instrument in the band. My lessons were at Cathy’s house, she, her partner Leigh, and their son Ben also lived in Earlwood, nicknamed ‘Girlwood,’ for the growing number of lesbians.

When Cathy told me she was pregnant with a little girl I suddenly found my passion for the French Horn. I came to my once a week lessons freshly excited, and would diligently work through my scales until the clock ticked over and I would double check again when she was due, counting down the days.

On August 10th Kylie was born. When we visited her in the hospital I sat holding her, her newborn eyes blinking slowly at me, I memorised the tininess of her face and the milia across her nose, and feel utterly in love.

From then on I would come at 5.30pm for my half hour lesson, and stay until the kids went to bed. After a few months Cathy finally let me off the hook, saying,

“You know Bren, if you want to just come play with the kids, you don’t have to keep doing lessons.”

And that is what I did.

Kylie and I were instantly tight. She was then, and still is, one of the purest, kindest souls I have ever met. I recently found a book of five-year-old Kylie quotes I’d written down:

Quote 2 “Can you feel the happiness swirling through your brain?”

Quote 3 “I love you more than frozen.”

My mum never liked camping so I’d join Kylie and her brother and two mums at rainbow babies camping each year, where I became surrogate sister to all the kids. I even had the quintessential big sister experience when one year I met an awkward, mostly silent teenage boy and walking along the beach one night we heard a chorus of giggles and turned to see a line of little heads poking over a sand dune.

When Kylie’s mums separated I started picking her up from school once a week. We’d go to the park, and whilst I pushed her on the swing I’d gently ask how she was feeling.

Quote 4 “Sometimes I have to save my cries up for later.”

When neither of her mums could make it to the mothers day breakfast, Cathy texted asking if I could. When she was nervous about starting the O.C. program I went over and chat to her about it. I’ve been to almost every single one of her birthday parties, including last year which was a slumber party with me and 8 10year girls squealing about a boy band. I hope she’ll still invite me when she’s a teenager, and call me if she needs, and one day be that person for my children.

And she’s not the only one, I have gayby siblings of all ages, in all places: Rory, Tessa, Sammy, Josh, Erin, Asha, India, baby Bowie, big sister Maya. There is a special understanding that seems to sit between same-sex parents and gaybies, and an even more special bond between gaybies themselves. So, whilst having lesbian mothers might have been part of the reason I didn’t end up with an accidental little sister, being queerspawn has given me intentional siblinghood with hundreds of gaybies everywhere.

Thanks for listening. Please subscirbe to the podcast, rate and review and follow Queerstories on facebook for updates. Follow me, Maeve Marsden, on Twitter and Instagram and please consider ordering a copy of the Queerstories book, a beautiful collection I edited with beautiful stories by incredible writers, such as Nayuka Gorrie, Benjamin Law, Candy Bowers, Candy Royalle, Simon Hunt, Liz Duck Chong and Rebecca Shaw.