Tea Uglow – The Three of Us

An everyday story about the perils of dating while trans while face-blind with Dissociative Identity Disorder.

Tea Uglow is a founder member of Google’s Creative Lab where she works on a range of projects with cultural organisations and practitioners using digital tools to amplify or augment their artistic practice. She has published 4 books including the recent Loud and Proud anthology of LGBTQ+ speeches, and was awarded a Peabody for digital storytelling in 2018. Tea likes pop-physics, behavioural psychology, and shopping. 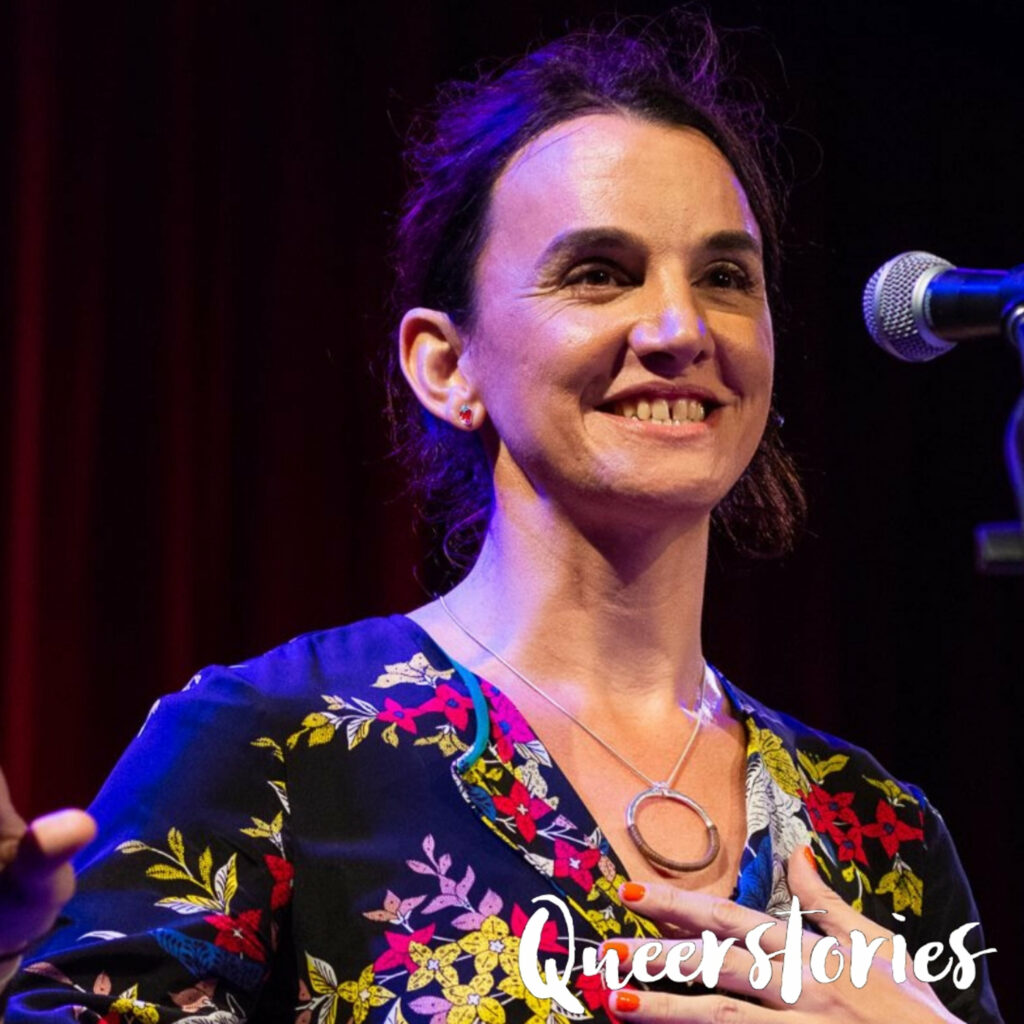 Tea Uglow is a founder member of Google’s Creative Lab where she works on a range of projects with cultural organisations and practitioners. She’s published four books, including the recent Loud and Proud anthology of LGBTQ+ speeches, and was awarded a Peabody for digital storytelling in 2018. Her 2016 TedX talk has more than 1.6 million views, so I expect podcast subscriptions to go way up when this is published. Tea likes pop physics, behavioural psychology, and shopping. Enjoy.

I’d like to tell you about growing up with my crazy friends Edie and Elle.

We are, in a way, three peas in a pod. And whilst there are other peas in the same pod, I am reliably informed that it can sometimes be difficult to tell us apart. I have certainly been mistaken for Edie, although never Elle. People assume we must be related because we are so tall.

We all grew up confused about our sexuality.

Edie is sort of straight. She like boys, in a deep-rooted sort of way, and she’s always been clear about that – but she also likes girls, ideally girls that arrive with boyfriends. She also has a sex drive, something Mother Nature rather skimped on with me.

Elle, on the other hand, is pan-romantic. She just likes everyone. She’s charming and naughty and impulsive.

Personally, I have identified – so far – as a gay man, a queer woman, straight (both kinds of straight), asexual (yes, really), and then, much to my friends’ relief, as bisexual.

Anyway. When we were three, in keeping with a much-loved transgender cliché, I realised that I was a little different and also realised that this fact, in 1970’s Kent, was not cool.

I was perfectly unremarkable, but I definitely believed in Switchover Day – when all the little boys become little girls and vice versa.

Turns out there was no Switchover Day. Still not really over that.

The adults said I was a little boy, or they assumed I was a boy, no one actually asked. And because I looked like a boy, I had to do boy stuff like rugby and boy scouts and go to an all-boys school and be head boy and be, you know, all boy-y.

Elle and Edie appeared in my life when I was about 13 or 14. I don’t know how. One day, there we all were. We played different parts for different situations – we all do that don’t we? You all have different masks you wear, you can be a different person if needed. Edie and Elle helped me be a girl when I needed that.

During puberty we started, y’know, feeling around. Practising. In our day, sadly before the internet, we used to look at lingerie catalogues.

It turned out, boys were meant to fantasise about taking the lingerie off – not putting it on.

Edie was fantasising about taking it off as well, but that involved the rather older men in the section at the back where they model the bathrobes and the knitwear. Edie, being Edie, drew annotated diagrams, and conjured elaborate fantasies. Elaborate.

But the rest of us, we were ashamed. We tried not to be the things we clearly were. We tried to be normal, middle-class, straight, white, English nerds.

We kind of put it in a place in our head marked ‘Do not discuss’. With anyone. Ever. So that’s going well!

For me, life consisted of learning how to be a boy, pretending to be a boy and enjoying boy things, and generally filling my cis-het male-privileged formative days with truth bombs like sleeping with other boys, wearing tights, and learning how to take nail varnish off on a rugby team coach. And then wildly dissociating in order not to disturb the illusion of my straight reality.

I was a boy and I liked girls, and somehow I was a girl and liked boys too. All fine. Not worth thinking about. Nothing much to be done about it.

Besides, it’s quite easy being a boy. It’s almost dull.

Edie came out a decade earlier than the rest of us. But it was still an enormous secret. We all lied to ourselves. I hid within myself and when I finally came out to myself as trans, it was like, ‘Surprise!’

I freaked and everyone freaked.

But in retrospect, Edie was like, ‘Uh huh, yeah, now can we go fuck boys?’ I mean she literally scheduled our transition around that objective.

It’s difficult dating whilst trans, especially dating straight boys, because they Do Not Read The Instructions. Or, you know, any words. Least of all the profile. The bit where we say, almost in caps, ‘I’m trans, please DO NOT FREAK OUT.’

I don’t want to be a trap, but I also hate getting rejected because people think… whatever it is people think.

And you see it in online chats. You see it in people’s eyes. I had this fabulous girl on one app who spent two days apologising because she didn’t realise I was trans. She said she was ‘too busy thinking about me sitting on her face’ to notice it said ‘trans’ in the three-word profile.

And you gotta say, frankly, I’d have fucked her just to make a point. The point being: you can’t tell from that angle.

Meh. She wasn’t keen. Boys on the other hand will fuck anything. Which is why Edie’s stories are more funny-tragic.

Edie’s boys are forever telling her they’re confused, or that they need to work stuff out. Which is really not what you want to be told in flagrante delicto. Like, guys who get cold feet when they’ve been dickpic-ing you for a week and telling you how ‘you’re gonna get it’. And you’re like, ‘yeah, when?’

The fireman kept making surprised noises, like ‘huh!’ and saying how weird it was to be fucking someone who used to be a guy…

Now, that’s not our kind of pillow talk.

In fact, it turned out Edie had every reason to be confused because the fireman hadn’t used his own photos. He used fake pics, and because Edie is as face-blind as I am, she hadn’t realised that, and, in fact, hadn’t worked out that this wasn’t the person she thought she was going on a date with, at least until after they’d fucked and he’d fucked off, saying something about how he had to ‘digest it’, leaving us to do any actual digesting required.

By the way Edie, Elle and Tea, they’re all parts of me. You’d worked that out right?

I haven’t really come out about my dissociative adventures. I don’t intend to come out really. But I wanted to tell my queer family at least, and that’s you.

We all dissociate, right? And we all have different identities, different selves, different masks for different people. Apparently, you’re aware of all your different parts, at the same time? One central self with different facets you can play with.

I don’t really get that central person or, if I do, they’re rubbish. I actually have lots of different selves and oftentimes they don’t share stuff, like, our memory. But we all exist. Edie has her own phone and her own Gmail account. The psych diagnosis is Dissociative Identity Disorder. And it’s kinda fucked up.

Annoyingly, parts of us also think, as you might, that we’re making it all up for attention. Because, of course, 6-feet-tall trans women need attention.

I do actually find it farfetched. But as a framework for understanding our craziness, it’s helpful. It’s pragmatic. It’s the simplest explanation for things that never had an answer before. And it is making my life easier to understand it this way too. And it’s keeping me alive.

By the way, as my family, you get to be ‘supportive, but confused’.

Anyway, Edie, Tea and other parts all spent a long time trying to work out whether to tell this story at all. And where? And how? Jury is still kinda out on whether it’s safe to do so.

But we are plural. And that’s okay.

Every time we have learnt about ourselves it is because someone else came out and told their truth, their story. I believe in the political act of storytelling as a way of letting folk know that they are not alone; that visibility is the most helpful thing anyone can really do for others.

So here we are. On behalf of Edie, Elle, Tea, and the others, we couldn’t think of anywhere else in the world we’d rather be. Thank you.