Tenille shares the story of their Granny Pam, a fierce woman who was one of the very first air hostesses working for South African Airways and who was instrumental in making Tenille the person they are today.

Born in Namibia to a South African and a Brit, Tenille Rogers inherited a love for singing and performing from their musical parents. They have performed around the world in bands, in theatre, in cabaret, doing weird burlesque, drag Kinging and doing a lot of karaoke. They are currently on the board of the Red Rattler theatre and do volunteer work for other charities around Sydney. This was their first time telling a story since they won the year 7 Eisteddfod for memorising and reciting “The Aardvark” by Roald Dahl, a tale where a spoiled American boy is eaten by his pet due to a miscommunication. 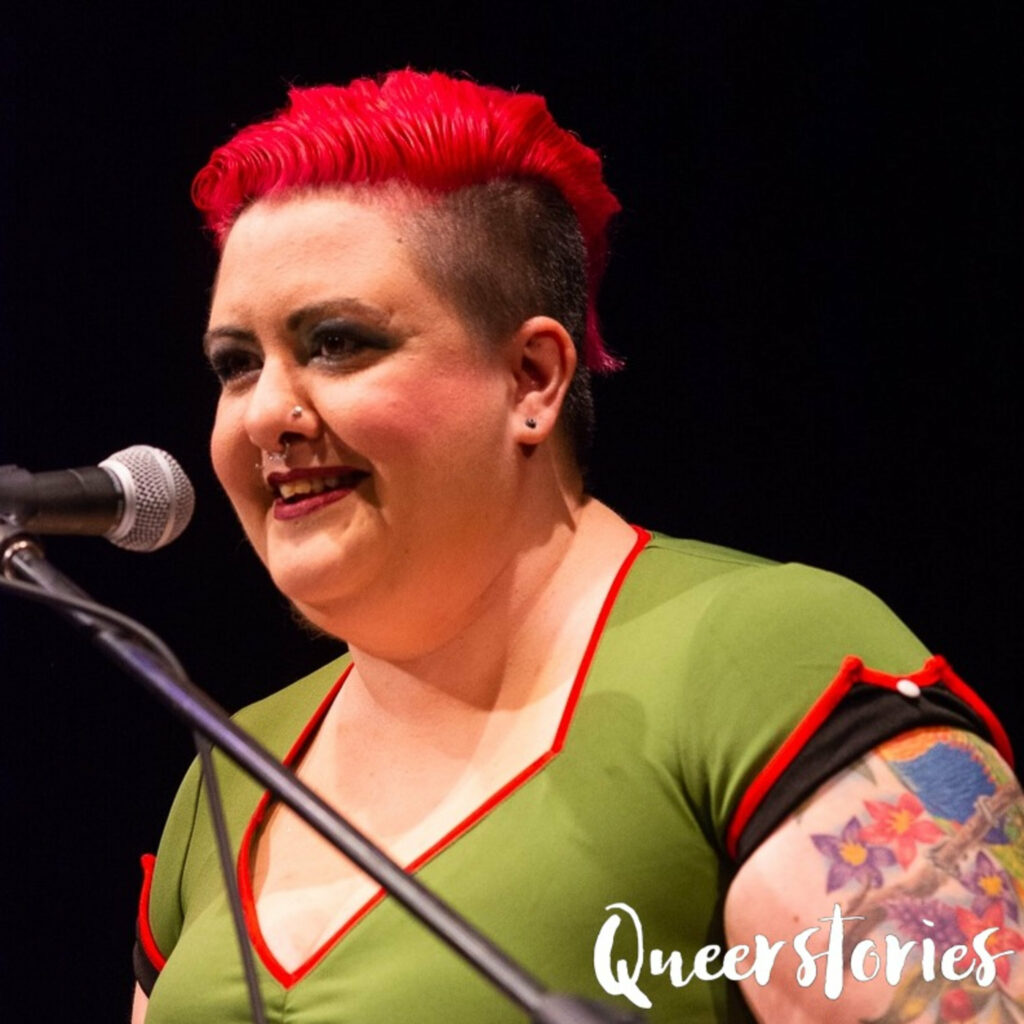 Before today’s story, I just want to do a quick plug for a show I’m doing, both as a live event for those in Sydney and as a livestream available internationally via Global Fringe. I’m hosting a cabaret variety hour of incredible local performers called Queers On The Fringe, September 23 to 26, with a pay-what-you-feel livestream on the Wednesday night. I’d love you all to tune in, I’ve got an incredible line-up of comedy, music, drag, movement, storytelling and more, with Jamaica Moana, Brendan Maclean, Victoria Zerbst, Nina Oyama, and Jojo Zaho. Check it out and book your tickets on sydneyfringe.com

And now, a story from Tenille Rogers, who performed at one of the last Queerstories events before lockdown. Born in Namibia to a South African and a Brit, Tenille inherited a love for singing and performing from their musical parents. They have performed around the world in bands, theatre, cabaret, doing weird burlesque, drag-kinging and doing a lot of karaoke. They are currently on the board of the Red Rattler theatre and do volunteer work for other charities around Sydney. This was their first time telling a story since they won the Year 7 Eisteddfod for memorising and reciting ‘The Aardvark’ by Roald Dahl, a tale where a spoiled American boy is eaten by his pet due to a miscommunication. Enjoy.

Before I begin, I want to acknowledge that most of my story takes place in South Africa and Namibia, two countries that were invaded and colonised, and that the persecution of Black people and People of Colour in these countries is still ongoing.

Although my story is set before the Apartheid, conditions back then were still completely in favour of white people and I acknowledge the privilege that my grandmother, my family and our forebears had and still have to this day as white South Africans. Indeed, my grandmother’s story would not have been possible for anyone other than a white person.

We had booked tickets to see We Will Rock You, a musical based around the songs of the band Queen, not realising that it was ‘premier night’, where celebrities are invited to come and see the show. We had to cross the red carpet and a stream of celebs getting papped in order to get to the lift and these people were oblivious to the tiny, feisty woman in the wheelchair. One of the fondest memories I have of my grandmother, Patricia Manchip (or ‘Granny Pam’ to everyone who met her) is of her poking a B-list celebrity in the bum with her walking stick after they refused to make way for the wheelchair. Queen was one of her favourite bands and no one, not even these celebrities, were going to stop her from seeing this show.

Born in a time when there was very little in the way of careers for women, Granny Pam nevertheless decided that she wanted to see the world. To this end she became one of the very first air hostesses for South African airways, and later was promoted to become the first senior supervisor of air hostesses, which was a pretty big deal.

In 1945, shortly after World War Two, South African Airways implemented their first commercial international service, running from Palmietfontein, near Johannesburg, stopping in Kenya, Sudan, Egypt, Libya – which was at the time was colonised by Italy –and then finally on to Bournemouth in the UK. This trip took 34 hours in total of flying and it was mainly patronised by politicians, celebrities and the extremely wealthy.

Because of this, being an air hostess was quite a prestigious position, and my grandmother used to tell of occasions where people would stop her in the street and ask for her autograph or a photo while she was wearing her uniform.

At the time of her tenure, the planes flew low enough that one could still open the windows mid-flight. There’s a photograph that unfortunately my mother couldn’t find that my grandmother took while hanging out the window flying over the Alps. And I mean, it’s just a snowy mountain, but when you realise that she was hanging out the window, it takes on a whole new angle.

The pilots for this airline were mostly made up of newly retired fighter pilots from the war who my gran recalled as ‘cads’ and ‘scamps’.

She was part of the cabin crew who flew Miss South Africa to her first international engagement. You can see there my grandmother in blue and Miss South Africa there with the purple, and some cads and scamps. She also fondly recalled flying and chatting with former president Jan Smuts, who published the Fagan Report, which spoke out against racial segregation, apartheid and restrictions on travel for indigenous African people.

In 1950, she met a veterinarian on one of her flights. He pursued her relentless with many gifts and flowers for a while before she agreed to marry him. Of course, back then married women were often barred from working and were expected to go and be good wives and so she had to leave her job at the airline.

At the time, my grandfather was the state veterinarian for Namibia during an outbreak of foot and mouth disease amongst the cattle of the tribes of the Namib Desert. He was given a small house in the middle of nowhere where the nearest city was a flight by Cessna airplane, for which he had a pilot’s licence. Can’t just pop to the shops.

At the time Namibia was in drought. My mother tells us about how until age 6, she’d never seen rain, and she was terrified at the thought of the rain because she could only picture water coming out of a tap.

With my grandfather being away a lot for work, my grandmother had to learn very quickly to adapt to life outside of the city. She had to skin and cure her own meat, scare off wild animals such as leopards, rhinos, snakes and scorpions, the latter of which my mother and her brothers used to keep in boxes under the bed, much to my grandmother’s delight. Such was the life that married white women were expected to endure: being at the whims of their husbands, being taken away from their homes and  friends and everything familiar. Nevertheless, she rolled up her sleeves and got on with things, as she continued to do throughout her life.

A few years later, they moved to Otjiwarongo, where my mother and her siblings attended school for the first time. In 1964, my grandfather decided to divorce my grandmother, leaving her with four children and no income. She later married a wonderful man named Mervyn who I recall fondly as my papa. After he passed away, my grandmother never remarried, instead focusing on her grandchildren and her faith.

She was a devout Catholic who embodied only the good things about Christianity: love, compassion, embracing those who are different to you, forgiveness and generosity, without any of the hateful parts of religion that our community faces today. She befriended the gay couple in the building despite backlash from the other tenants. She even had a gay flat mate for many years. She instilled these excellent values of acceptance in my mother, my sister, and I, which we have passed down to my nieces.

We eventually moved to Manchester in the UK, where my father was originally from. My grandmother remained in South Africa, but due to her failing health, she decided to come and live with us in the UK. She never stopped missing South Africa and sadly died a few years later. We took her ashes back, sprinkled some on her favourite beach, where she used to do cartwheels even up until the age of 70. She was very fit. We also placed some at the church she attended regularly in South Africa. On the flight over, due to a miscommunication, her ashes were lumped in with the regular baggage, and came shooting out on the baggage conveyor to a mixture of horror and hilarity from my mother and I. As traumatic as this sounds, my grandmother had a wicked sense of humour and she would have been highly amused at this turn of events.

This wicked streak was one of the best things about her, causing us to frequently get the giggles in church, where we sometimes had to leave so as not to disrupt the service. Also, once on a family holiday, where my sister and I had subjected the adults to yet another ‘show’, my gran disappeared into the house and came out wearing a pink string bikini and two pink ostrich feathers, and danced to one of her favourite songs, a sex worker positive song about a stripper named Patricia. It is easy to see where my love for singing, dancing and burlesque comes from with such a great influence in my life.

I know she would be proud of me living my best life. I am sure she would have embraced both my queerness and my transness had she been around when I came out.