Teresa shares her story, spanning decades, of life, love, family and climbing the ladder in a male dominated industry.

Teresa Avila is cofounder of the Red Rattler Theatre and was founding chair and treasurer for 10 years before stepping down last year. She has worked in engineering and heavy construction for over 20 years and is one of the industry’s few operational facing senior women. She is a recreational pilot and served on the board of directors of Recreational Aviation Australia and, in 2013, founded Avila Aviation Pty Ltd. 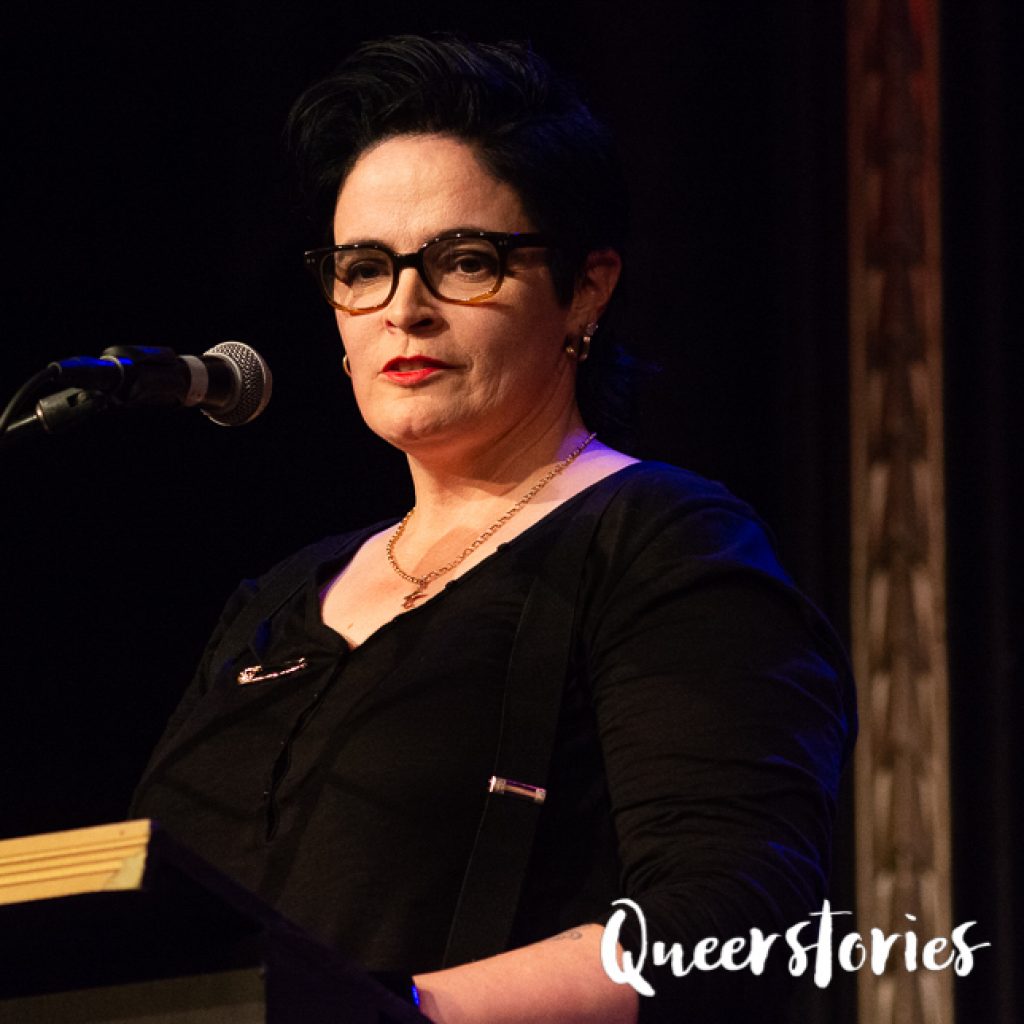 Teresa Avila is a co-founder of the Red Rattler Theatre and was founding chair and treasurer for 10 years before stepping down last year. She has worked in engineering and heavy construction for over 20 years and is one of the industry’s few operational-facing senior women. She is a recreational pilot and served on the board of directors of Recreational Aviation Australia, and in 2013 founded Avila Aviation.

I just want to say, firstly, that I’ve had ten minutes sleep for a reason I’ll explain at the end of the story, but here we go.

It’s 1989, I’m 15 years old and it’s my first day at Goulburn High Public School.  I stand out because I’m the Catholic girl from the all-girl private school in Wollongong, and I am a wog kid.  I am anxious about being at a co-ed high school for the first time and having moved away from home to be there. And now I actually miss wearing my old pinstriped tunic, the collared shirt, tie, blazer, shiny black shoes, which in retrospect provided a kind of dandy androgynous look that I enjoy today.

*Audience member whistles*The nuns at St Marys College were quite progressive in teaching technical drawing classes but were unable to offer the next step for me, which was engineering science. That is what I had become passionate about. I am the girl in the class, one of the boys in some ways but just bullied in all the other ways.

I finished my HSC though and got into the Mechanical Engineering degree at Wollongong Uni. I was the youngest in my year and 17 years old. For the next four years, I juggled back-to-back exams, six subjects a session, uni bar, sexuality, love, queer dating, lovers, parties, identity, and growing up.  It’s amazing in a lot of ways I actually graduated.

So, for my first summer session, I worked in an underground coal mine – don’t judge me. Proudly wearing my hard yakka pants and shirt, safety helmet with a mine light, tool harness, safety boots, covered in heavy coal dust. Going to the toilet involved walking down pitch-black, very long and dark underground corridors that were carved out of the coalface. The toilet, if you could find it, was a rusty metal can. I was asked to tell the mine manager when I was going there for my own safety, in case one of the miners tried to follow me. I was the only woman in the underground coal mine. In fact, I was the first woman to actually work in that mine. Shifts were 14 hours long and I learnt to just not go to the toilet, and I still have amazing bladder control for that reason.

In 1996, now 21 years old, I graduated as one of only two women in the entire graduating class, and I think the only queer. I knew well already any of my successes would be dismissed as positive discrimination. For the next 20 or 25 years, I’ve worked my way up the slippery ladder of the male-dominated heavy construction industry.  It’s a misogynist, racist, sexist, transphobic, homophobic industry. And although I am referred to in queer life as Mister T, or Daddy, I am seen as very female and very she at work. In queer personal life, I am usually misperceived as masculine or he. My pronoun is “she” by the way.

After uni, I was living in Newcastle, working full-time. One night, I walked into the local queer club, an old venue called the Lucky Country. As I looked up, I saw true love. We fell in love instantly. Our eyes locked across a crowded room and we started an epic romance We grew together, we built our careers side by side, we built a home. We collaborated on creative projects and made epic things happen together. We gave birth, as co-creators and co-founders, to the Red Rattler Theatre. We were that smug, happy, fiercely independent long-term power couple.

When we separated after 11 years together, our friends and family cried. When we separated, we had to confront life choices, missed opportunities, heartbreak, and division of assets. We would joke we were only babies ourselves but I had only just started to imagine queer family through adoption, or that my soul mate would be pregnant and carrying our baby. And we are now, by the way, a long-term power friendship, and she is part of my queer family.

After the break-up, I fell in love… with recreational flying.

I love talking about flying. It’s an inherent part of who I am, and also pilots love telling people how awesome we think we are, and we actually do think we’re very awesome.

I’ve had so many adventures flying above the clouds at altitude, looking down at glistening lakes and tree-lined rivers, picturesque misty haze through the Blue Mountains, cutting above the great Western Ranges, turning east towards the coastline and seeing a vast blue expanse over the escarpment. It’s very romantic. Life literally changes perspective when you are looking down through clouds at altitude at 8,500 feet.

I was now flying solo, and I decided to take on the work I needed to around childhood trauma, and I started to discover my true sense of self. I worked at trying to be vulnerable and seeing the strength in that vulnerability.

Since that breakup, I‘ve had queer adventures, intrigues, lovers, partners in crime, holiday romances, hot dates. I’ve had really wonderful and special relationships, and I’ve been blessed. But, a few years ago, I came out of an unhealthy, toxic relationship. I was devastated, exhausted, and my self-esteem at rock bottom.  Before the breakup, with maximum hormone injections five times each day, I went through two contingent egg harvests, one successful, and I was about 40 at that time. I remember how heavy I felt and that my ovaries felt massive, and that my ovaries would explode and eggs would just go everywhere.

I felt my queer family aspirations had died with that relationship ending. I went back to the fertility specialist that we’d been seeing. I went back in tears and told her what happened and she said, “Why don’t you get pregnant?” And then I laughed an unusual amount of laughter, nervous laughter, a lot, but she leaned in and said, “Teresa, you are 42 years old, are you sure? You really don’t have much time to change your mind.” It was very cutting and I felt very lost. She referred me to her colleague, a meditation-based Buddhist mindfulness psychologist; a woman with amazing insight who had her own challenging IVF journey. And, in my first session, we agreed my major hurdle sat with self-discriminating perception that I could just not imagine having a pregnant body or being a solo parent.

I had challenges around my identity and also unable to find clothes already that fit my plus-size body, let alone having to think about maternity or paternity wear. Six weeks later, it’s now 2017. I shocked myself and a few of my close friends, and I decided to try and get pregnant. I had my first IVF consult, which was by phone from San Fran Pride. My chances were low but I felt I would get pregnant straight away. There was no evidence suggesting I had fertility issues. My mother tells the story that she had five children in a sum total of 10 hours of labour.

That’s literally two hours of labour per baby, including myself. She believes she could get pregnant if someone just looked at her.

With more injections and procedures, three more of my eggs were retrieved but unfortunately, only two of those were viable and fertilised. The night before the embryo transfer, a nurse rang and confirmed only one of the embryos had survived. Fuck. As I waited in the stirrups the next day, in a mood-lit expensive IVF clinic with my friend DJ Sveta – he’s over there, he came with me today – we both looked up at the little blobs of cells on the screen and I imagined the tiny one embryo was my baby. I was hopeful and I was fucking anxious. Unfortunately, the odds were totally against me. The doctor carried out the procedure and I felt physically ill. She was having a few complications trying to locate my difficult cervix. They were actually the words that she used, mid-procedure, to describe the complication she was having.

Yeah. The next two weeks were stressful and I did a lot of meditation. I was at work, had just started a new job literally the day after that procedure, and my phone rang. The nurse asked me how I felt and asked me to sit down. It was not ideal and I just held my breath.  I was unbelievably lucky – pregnant first go at 42. My dream baby Anton is now nearly two years old. She’s gorgeous, obviously, fiercely independent and totally advanced. I know all parents say that but…

… it’s actually true. Someone here will vouch for that. She really is totally advanced.

I wanted to say that I had 10 minutes sleep because unfortunately last night she had a very severe medical emergency and I had to rush her into RPA, which happens quite a lot. She has some issues. I wanted to also point out – and it’s not in my story – that obviously being a solo parent, or any parent, can be very challenging. It’s also very rewarding. It’s probably the best thing I’ve ever done, to be honest. My best project yet.

Whilst I experienced an interesting stigma during my pregnancy – a story for another day – I am really happy. I work full-time, I solo parent full-time, we have a massive bio and queer chosen family, a lot of which are here tonight. I fly my plane, I have construction projects and personal creative projects, and sometimes when I’m not sleep deprived or working through my separation anxiety issues with her, just sometimes, I go on dates. Thank you.