Kate Jones and Ted Cook tell us the story of a pair of twins, some snow and slamming it down fast, the perfect analogy for Teddy and Kate’s beautiful queer life.

Kate Jones launched The Vegan Teahouse in 2012, the Vegan Collective night market in 2014, and last year established MAKER, a queer feminist run shared commercial kitchen, education space and coffee bar in Petersham. Her identical twin, Ted works at ACON, is an affiliate member of the Australasian Society for HIV, Viral Hepatitis and Sexual Health Medicine (ASHM) and the International AIDS Society (IAS), and is a founding member and Co-Chair of the Peer Advocacy network for the Sexual Health of Trans Masculinities (PASH.tm). 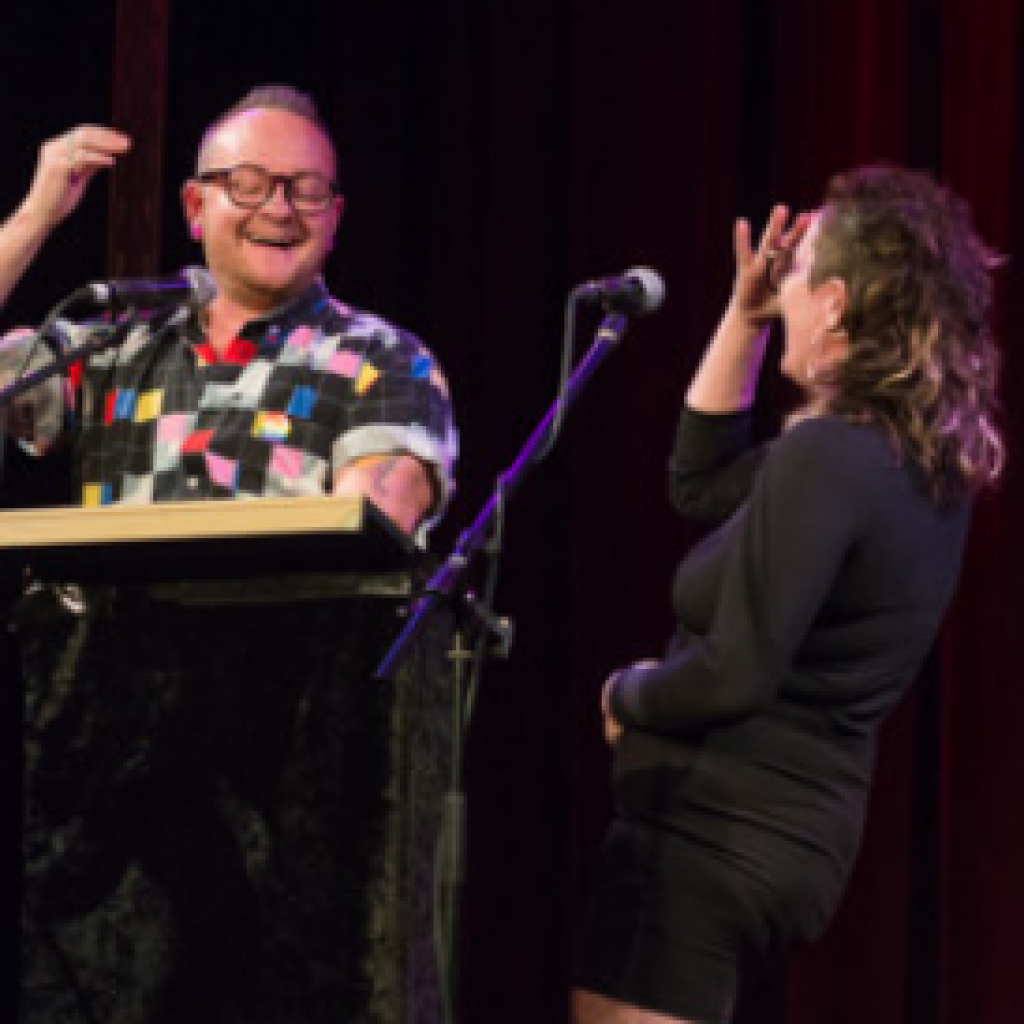 Hi. I’m Maeve Marsden and you’re listening to Queerstories – the podcast for the monthly LGBTQIA storytelling night I host and programme. This week’s story was part of a special event where I invited pairs of queers to share a tale together. Lovers, family, couples, friends. Queerstories Two by Two, celebrating all forms of queer love. Next up – Teddy Cook who works in LGBTQI sexual health and his twin Kate Jones, who runs the Vegan Teahouse.

TEDDY: This is a story of a pair of twins, some snow, and slamming it down fast; really, an analogy of our beautiful queer life. Hey, so it’s 1993 and we are feral.

TEDDY: I reckon there are probably some people in here who weren’t born in 1993. Shit.

TEDDY: Anyway, we’re teen twins and we are in the western suburbs of Sydney. One is obviously already horny for the D. The other one is already really obviously a lesbian. Fast forward 25 years, and that’s kind of a different story, but if you were to take one guess looking, you’d probably get it wrong. This was a very important year. This was the year that the Native Title Act passed, the Republic Advisory Committee has convened by old mate, Malcolm Turnbull, and, Sydney is selected for the 2000 Olympics. The Prime Minister of the time, also very importantly, Paul Keating. And, this is what happens when you Wiki, “What happened in 1993?” He denied any involvement in a multi-million-dollar salami venture with a Hungarian company.

TEDDY: I can’t help myself. The Aria Charts of 1993, for those who weren’t alive or appreciate a classic could, arguably, I think, be seen perhaps as really one of the best years in music. I was all about Ugly Kid Joe, Faith No More, and Guns & Roses. I was fuckin’ rank. Oh, my God. I’m really just beginning to feel it now.

KATE: Mm, and I listened to nothing but Janet Jackson, Wilson Phillips, and Mariah Carey.

KATE: 1993 brought us such classics as I Will Always Love You – Mariah Carey. I’m sorry, Whitney Houston.

TEDDY: How dare you! Cat’s in the Cradle – Ugly Kid Joe. Remember?

TEDDY: I never do this in my daily life.

KATE: Who are you?

TEDDY: Take the boy out of Penrith…

KATE: Give Me a Little Sign – Peter Andre. Classic.

TEDDY: *hums line of Give Me a Little Sign*

KATE: Dream Lover – Mariah Carey, the goddess of everything.

TEDDY: And, I was also very busy writing the lyrics down of every single word of November Rain by Guns & Roses in my tape player.

KATE: It was school holidays, it was winter, and our parents were clearly fucking over it, so our mum made a pact with a random colleague to send us away with his 16-year-old son Matt, who we’d never met, for a week of wholesome fun in Perisher. Our family had been dirt poor. We were a total accident or a pleasant surprise as mum likes to call it. In 1993, they jumped into a Shaggin Wagon, purple and white Ford panel van, and had made it as far as North Queensland when Mum discovered she was up the duff.

TEDDY: They were homeless, jobless, and there were twins on the way. They weren’t married. Cool. So, Dad went wild. He sold the panel van they’d been living in, got rid of the flares, and then decided that he was not only a professional painter… I don’t even think he’d painted.

TEDDY: He was a handyman, and that’s what it says on our birth certificate, “Handyman – Occupation.” He was a courier. I don’t think I’d met him in that first year, but when we were one it was 1980, and he’d managed to get some cash together to claim a three-bedroom house in regional New South Wales, AKA Penrith.

KATE: By 1993, we’d sold up and moved a bit closer to the city, Baulkham Hills, home of Hillsong, you know it.  And here we were boarding a bus to the Snowy. Mum’s more of a high-level thinker; I so relate to this. Detail can get a bit lost somewhere. For instance, she actually hadn’t told Dad we were going. She’d organised accommodation, had organised ski gear but hadn’t actually paid for it, had arranged lift passes, had booked the bus, hadn’t organized any extra money for us, hadn’t checked that Matt was cool with some baby angsty teen girls tagging along on his rad snowboarding week away. Mum had also decided not to answer the phone, which, as a parent, I find both understandable and perplexing.

Yeah, so Matt wasn’t cool. He was a 16-year-old ranga with ghostly white skin, who clearly had other ideas for Perisher that certainly didn’t involve us. He was going to snowboard and be cool.

TEDDY:  We had this place to stay, which was cool, right? Fine. It gave us brekkie and dinner. All of the money that Mum had given us we spent on skis, and gloves, and boots, so we had no money. We were sorted. We were a set. It was going to be an adventure. No money, no supervision, no real clue actually of how to ski, but we had each other, and it was fucking going to be sweet! Hey, Matt, by the way, had totally ditched us. He was off. He pretended he didn’t know us. We were like, “Heyyy, can you, like, maybe fling us a couple of bucks, kind of?” And he was like, “Yeah. Nah.”

There’s one thing that you can say about a couple of identical twins growing up in a kind of amazing house that we did, we’re really resourceful. Day One: Realize brekkie and dinner meant no lunch. Hadn’t twigged: No snacks. No drama. “Let’s just eat snow all day.”

This is a very important lesson: White snow is good. Yellow snow is bad. Black snow, not good either.

KATE: Day Two: Realised we had no friends. No drama. “Let’s throw snowballs at random people all day.” We sat on a little hill on the ski slope, chairlift humming behind us, and threw snowballs at unsuspecting passer-byers, all day. What brats. 10 out of 10, would do again now.

KATE: A beautiful couple, we had definitely hit with a snowball or two, took us under their wing. They were understandably very worried about our wellbeing and gave us $20, which we promptly spent on chips and lollies, as any teen should do. We tried to get beers, but we were babies, so no. We found two bucks in a pocket at one point and bought an entire can of Solo and slammed it down fast.

TEDDY: That’s where you can go slower, like this, all right? “Hey, let’s go to the top of the most dangerous route on our own. What does that black triangle mean? Danger? Fuck yes, let’s do it!”

KATE: We were so there.

TEDDY: I got to say, it didn’t start out very well. I disembarked the chairlift and immediately stacked it. I was mortified. It was just not a good look, but we kept going.

KATE: It was a good look for me to watch.

TEDDY: We were pretty much at the highest point you can go. I feel like altitude-sickness-high. We are 14, really, honestly, stupid as fuck.

But, being twins, we’re one-egg twins, we kind of accidentally build each other up a little bit.

TEDDY: We can do it with no evidence to support it.

KATE: We’re pretty good at that now too actually.

KATE: We start slow, dipping and weaving and snow-ploughing like you wouldn’t believe. Our tummies are full of eggs on toast and heaps of snow. We are pelting down a massive hill with literally not a soul to be seen. A blur of ‘90s parka fashion-

KATE: We should’ve. So good! No helmet because we couldn’t afford it, but I had this magnificent perm that was whipping around me.

TEDDY: It was epic. Mariah Carey.

KATE: It was so good, so good. Ted had long, dirty grunge hair; the epitome of depressed teen.

At one point, I’m ahead and realize moments too late that we are headed straight for a ditch. I can’t stop, can’t even snowplough, and both of my skis go directly into the ditch and plunge me head-first and metres ahead into the snow. Winded, I turn, and Ted is headed for the same fate.  I can still see it! *laughs*

TEDDY: So, I saw what happened…

KATE: The hair’s going out. It’s so good, so good.

TEDDY: And it was really bright. My parka was so bright. I honestly thought that I could jump this ditch and go to her aid.

KATE: I saw him try and jump.

TEDDY: I am screaming, “Katy!” [high-pitched] down this mammoth hill. Yeah, like I said, 14, tiny, short-sighted, fucking starving, and not very smart, also. I landed in exactly the same place. Face-first into the snow, with such incredible force I literally thought I was going to die. We’re fucked. Fucked. Gasping for breath and, of course, laughing hysterically.

KATE: Thankfully, nothing was broken. How?

TEDDY: No idea. It was the Solo.

KATE: Must’ve been. And the snow? But we very slowly made it down the bottom of that damn hill, knowing that despite it all, twins can get through anything with a mouthful of snow and each other.

TEDDY: And, despite our very best efforts, 25 years later, we’re still here and we haven’t broken a bone between us.