Tarsha shares a story of faith, family and identity.

Tarsha Jago is a law student and Project Officer, Drug Policy and Reform at Department of Health & Human Services, Victoria. 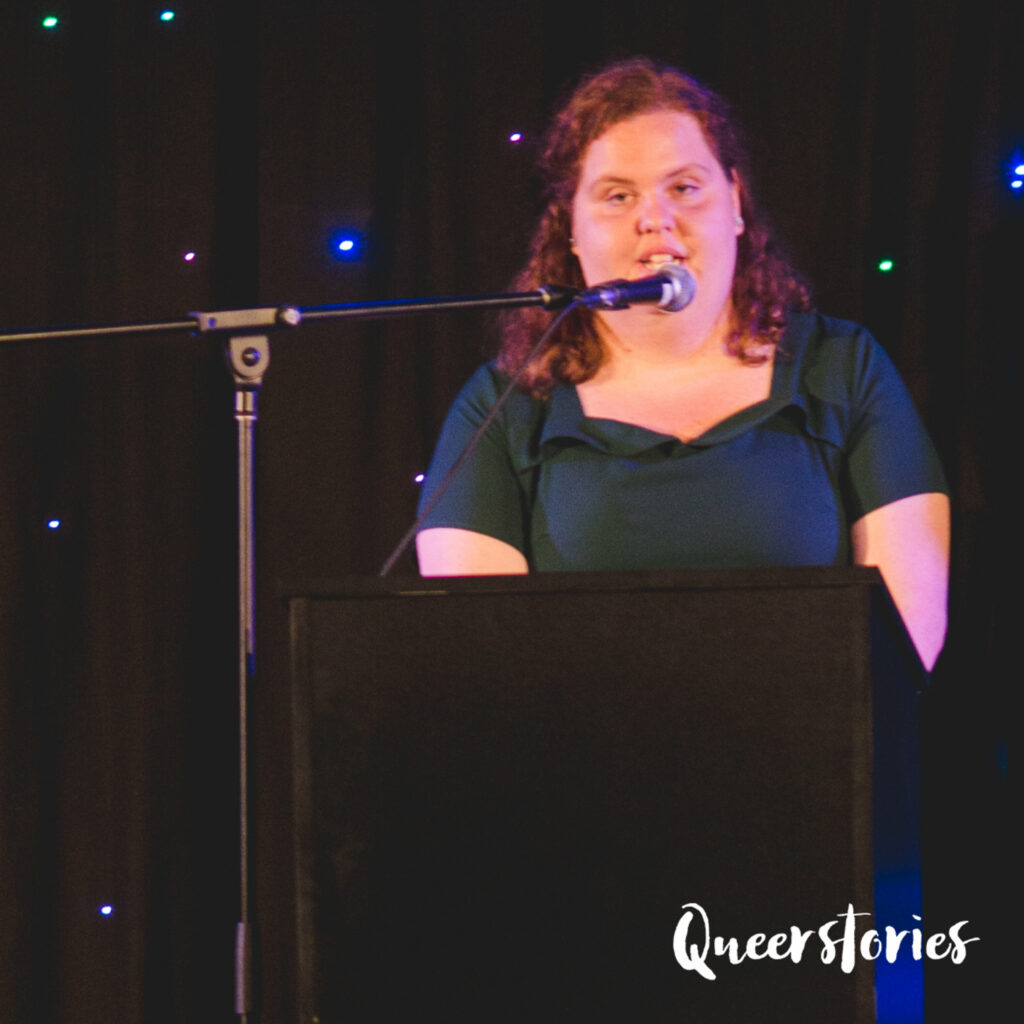 My name’s Nayuka Gorrie, I curated tonight. Tonight’s an all-Black line-up and I’m really excited to be able to do this so thank you all for coming.

So next up, Tarsha is a palawa woman who grew up in Tassie. Last time I saw Tarsh was on this stage actually and she was just being really funny and put a balloon between her legs and anyway, things were going everywhere. She’s great. She’s a paralegal, and a law student, and she’s been living here in Melbourne for four years. Let’s welcome Tarsh!

A Catholic Aboriginal: It sounds like a conundrum, but it was my childhood.

Given the nature of this event, you’ve probably figured out that I’m also someone who had to come out of the liquor cabinet. Which is another layer of inconsistency. Now, an Aboriginal lesbian isn’t something that’s uncommon, and that’s something that I’m really proud of and really grateful for. But it’s the intersection of these three identities that turn my thoughts into that little icon on a window screen that’s just shooting around and not achieving anything but also never leaving.

I remember being about seven years old when I began questioning my faith.

When I was almost two years old, I had a lengthy seizure which caused my heart to stop twice, and I remember reflecting on this years later and thinking, if it was God’s will for me to die, why did he allow me to be saved? And if it was his will for me to be saved, why did he allow me to die? And apart from the realisation that God was obviously a gubba, I remember reflecting and deciding that the strangers that were in the medical team that saved my life were morally better than any God that I had believed in. And I figured these people who were perfect strangers had cared for me. They had nurtured me, and they had considered my wellbeing, and this was better than anything that I perceived any God could have done.

I took comfort in this throughout my teen years, and then at age 20 when there was an announcement that there would be a national survey about my human rights – am I right to marry? – I realised that once again I would be relying on complete strangers to care for my wellbeing, and this time around I wasn’t so sure of their morality.

Except this time there was more to gain than my life, and there was also so much more at risk. I knew in the moments following the announcement that this wasn’t a fair fight. I remember the feeling hitting me – I felt as though all the vulgar things that members of the Catholic church were saying had been thrown into the collection basket, the same basket my family had always given the little spare money we had. I remember feeling like I had been forced to follow this basket, full of loose and heavy coins. I could feel it with every breath I took and every movement of my body. I could feel the heaviness of it and the sting of the heat of their words.

I found myself pleading, pleading with the Lord that I wasn’t sure I believed in, asking him if his actions were rooted in love and strength, like I had always been taught, then why, why were his followers at the front of a campaign that was rooted in hate and fear?

I had a sudden epiphany on my walk to uni one afternoon. I suddenly and very clearly understood that while my childhood had been immersed in love and in strength, that wasn’t from my Catholic family, it wasn’t from my church, and it wasn’t from the broader parish. It was from me, my community, my history and my bloodline.

The strength and the courage that I recognised inside of myself was not God-given, and it was not in his likeness. Just like my curly hair, my wide nose, and my sleep apnoea, these were gifts from my mother, her father and his mother – a gift that was 60,000 years in the making. I knew that it was this love and this strength that would lead me to overcome the fight that lay ahead.

On this day I walked to uni slowly because I didn’t really want to go. And as I approached the bus stop, the bus pulled in, and my eyes were drawn to it, and while it was probably because there was a KFC ad on it, there was something about this bus that was drawing my attention. I watched it really intently and I stopped and stood as it pulled up.

The first person out of this bus was a woman, and she had this glow, like on the X-Files intro. There was just this glorious glow surrounding here. At first thought, I thought Beyonce’s here. But then she approached me and I recognised the staunchness and the resilience and the power that seeped from her face and her skin. And the glow slowly dimmed as she approached me and I realised it wasn’t Beyonce. And when I saw her hairstyle, I knew it definitely wasn’t Beyonce. But I did know that it was a blakfulla, and I knew from her Doc Martens and skinny ankles that she was a blakfulla that was queer.

I soon learned her name was Edie. And I have no memory of our conversation on the way to the uni student lounge. But she was at my uni to run a workshop with blakfullas. I can’t tell you what this workshop was about, I can’t tell you how long it went, I can’t tell you anything about it, except that there was a lot of pizza and the pizza was really good. The whole two hours I was thinking about how this stranger was going to get me through this survey. And also how the pizza parlour made the sauce so good. I realised that this newly found sister, and the two of us together, were going to get each other through the survey, and that we were going to get every other blackfulla in our circle and in our community through the survey.

At the end of the workshop, as she rushed out the door carrying boxes of leftover pizza, I ran to chase her. Running is a very rare occurrence for me but I ran the 3 metres to catch her and, panting, I said ‘oy, sis, don’t take all the barbecue chicken. Also, Blackfullas for marriage equality.’ She looked at me really confused and said, ‘yeah, sure’, and then she left and got in her car with all the barbecue chicken pizza.

Before she’d even drove out of the driveway, I was on Facebook creating a page for our community. I was up until the early hours at the student centre, creating graphics, making lists of my cousins who were going to help me and just didn’t know it yet, and trying to find out so hard how to get involved in the rallies and how to get blackfullas at the forefront of the fight. And I’m still convinced this process would’ve been a hell of a lot easier with some barbecue chicken pizza.

When we woke up the next morning, we had over 1,000 likes on our Facebook page. And now sister-girl was interested. It was never intended to take off like that, like a rocket, but seeing the number of supporters on our page felt like being wrapped in a big warm hug from an aunty while sitting on her knee by the fire and knowing that you were going to get the first piece of cooked damper. It felt like our community had seen us. Not only had they seen us, but they saw that we were hurting and they saw that we were scared. And they showed their strength, and they showed their love.

We knew, starting this page, that our community needed us. What we didn’t know was how much we needed them.