Tara Suamba – There Are Absolutely No Gay Balinese People

Tara Suamba shares a story about her constant conflict between her queer and Balinese identities.

Tara Suamba studies, practices and teaches law with a human rights focus. She enjoys time with her greyhound Sonny, taking down institutions from the inside and crosswords. 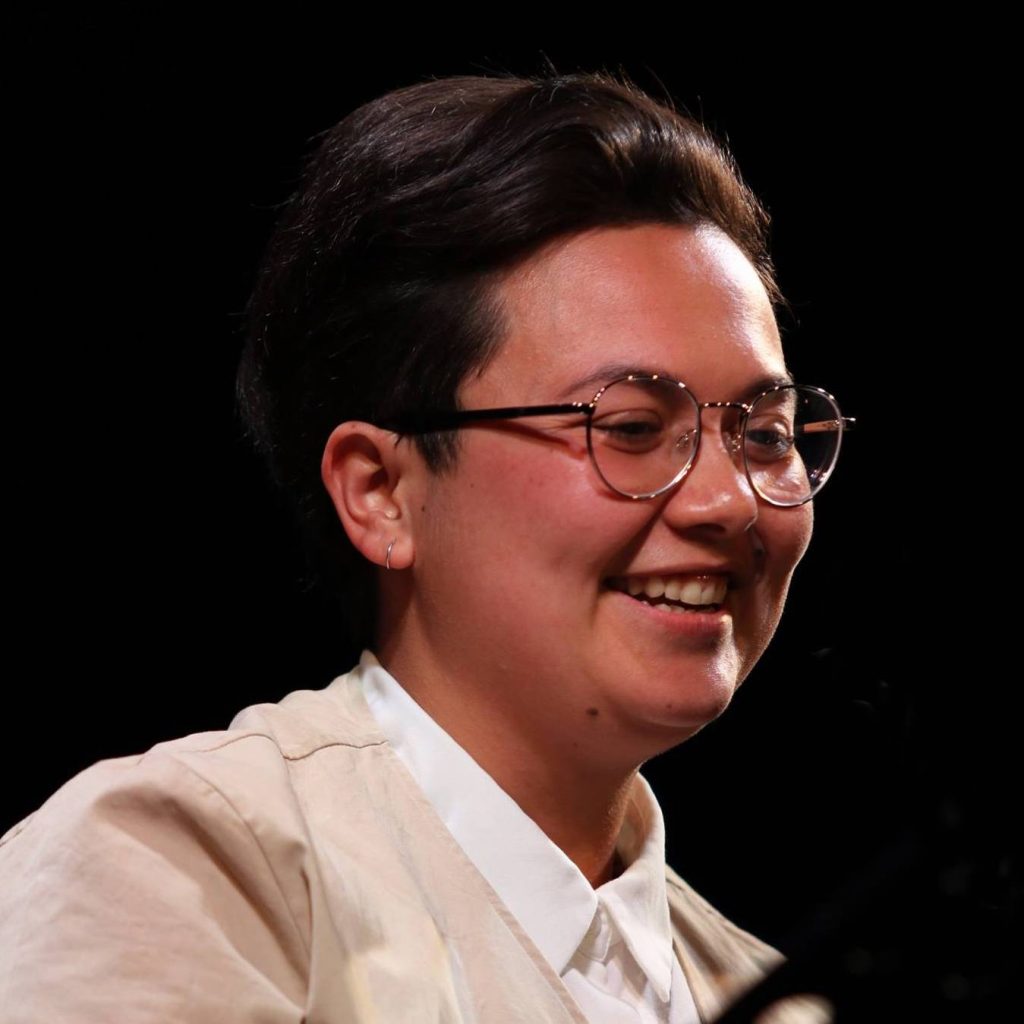 Hi. I’m Maeve Marsden and welcome to Queerstories – the podcast for the LGBTQI+ storytelling night I host and program. Queerstories events happen regularly in Sydney, Brisbane and Melbourne, and I’m also now hosting them in regional towns. If you enjoy these stories, please rate, review and subscribe to the podcast, and consider buying a copy of the Queerstories book: A collection of 26 of the stories edited by me and published by Hachette. I’m really proud of this collection and I hope you enjoy it too. Tara Suamba studies, practices and teaches law with a human rights focus. She enjoys time with her greyhound Sonny, taking down institutions from the inside, and crosswords. Tara performed at Queerstories in Melbourne.

This is a story that I wrote very recently, and it is called There Are No Gay Balinese People. There’s a spoiler just by looking at me, right?

Yeah, I thought so. When I first moved to Western Australia, I, like all the other six-year-olds, was obsessed with the Spice Girls. When roles were divided, it was pretty clear who I would be allocated – Lesbian Spice.

But alas, my friends insisted I would be better suited to Black Spice. Flash-forward to 1999, my Dad made me a Hermione Granger outfit to wear during Book Week, and I looked fucking dope, except no one knew who I was. Others said that I was too brown to be Hermione and that I could not be her. Maybe I could be Parvati, so I could fade slowly in and out of the books’ narrative.

Then, Destiny’s Child drops Say My Name. I was pumped. I listened to that song over and over again, celebrating those beautiful women. When I announced that I would go as Beyoncé to the celebrity-themed Blue Light Disco, it was again met with disdain. Who was I kidding? I wasn’t black enough to be anyone from Destiny’s Child.

For me, these stories mark a life-long struggle – my brownness was a scale and my white peers decided where I sat, and very frequently it was just “no.” To complicate my coming of age further, I am also gay, just like, really, really fucking gay.

Thank you, thank you. All my life, I was very confident that I would be with women forever. My dad is Balinese, and there are no gay Balinese people. This is not some kind of queer dramatic flare right now. I’m not kidding. We can’t. I am Brahman, part of a Balinese dynasty that can be traced back to the 800th century [sic]. Some people may even call me a Princess.

So this is how the caste system works is, if I marry a high caste man, all is well, but marrying a low caste man will see me exiled from my village and shamed for the rest of my life. For high caste men, fucking go to town. You want a wife? Have a couple. Where do they come from? Doesn’t matter. High caste? No. We are stripped of everything, and I was taught this from birth. What would happen to me though if my family knew that I was gay? Would my family disown me? Would they spit on me if they saw me on the streets? Would they perhaps kill me?

I couldn’t be a gay Balinese person because there were none. All of me was definitely gay though, but I suppose I was only half Balinese. Asian women are feminine, pink-dick hungry, porcelain-skinned, fleshlights. How could I be who I was, while my Asian heritage restricted me so?

When I began high school, it dawned on me: I was half white. I knew that white people could be anything. They were colonisers and capitalists, and they were homosexuals.

It was easy to box off and seal up my Balinese heritage. I stuffed it down deep, deep inside of me and locked it up behind layers of shame and fear. What did it matter? I was only half Balinese.

Throughout my adolescence, my queer identity flourished. I bought DVDs with lesbian storylines off eBay, I stayed up late to watch The L Word every… I love how every lesbian gets up here and references The L Word.

Yes! I was obsessed with Emily and Naomi’s storyline from Skins, and-

Yeah. Some fans. And I also watched many Olivia Benson and that hot lawyer from Law & Order SVU compilation set to Evanesce soundtracks on YouTube. After this, it’s definitely worth a rewatch when you get home. In short, I learned how to become a very good gay.

To be clear, Perth is not some kind of gay utopia. Seriously, don’t move there. It was quite the opposite, really. I will never forget being spat on when I held hands with a girl on an escalator. It was a very hard and challenging time but it was valid. People didn’t question my sexuality in the same way that they questioned my mixed race. I was never too gay or not gay enough.

People would ask me where I was from, and I had done my best to fit in, perpetually hiding from the sun to ensure my skin never got too brown. I was born here, my mother was white, I was white enough, and everyone needed to stop asking and just fuck right off.

I moved around a lot in my early adult years, so unpleasant thoughts would diminish in fun new environments. I would try to ease that tension inside of me until eventually, I settled in Melbourne.

In the night, I dreamt of Bali and one memory, in particular, struck me. It was my grandfather’s funeral and I was 10. After someone is cremated in my culture, we take their ashes and we place them inside of a delicately handcrafted bamboo boat, and we let them out to sea. It is only the immediate male descendants that are able to partake in this part of the ceremony. There was no fucking way I was going to stay sitting on that beach. I took off after my brother and cousins out into the ocean, but I could hear people calling me back. I’d embarrassed them all. They pleaded with my dad to go and get me and, sure enough, I heard him wading quickly towards me through the water, and braced myself for a scalding.

Instead, he took off his shoes and placed them onto mine. The reef was sharp, you see, and I’d left my shoes on the beach, and he didn’t want me to get hurt. He took my hand and we walked out together to join the others. We watched as my grandad’s ashes drifted towards the horizon.

In revisiting the memories I’d repressed for so long, I could see all of the times my dad protected my masculinity from ridicule. Perhaps my fear was unjustified.

Just a few short months ago, I returned to Bali. I learned about my culture and the complexities and beauties of Hinduism and visited temples my ancestors had built, and I spoke my language, and my Balinese accent returned. My queer identity had feared my Balinese self for so long, but in its purest form, all my culture required me to do was to love myself. I bathed twice a day with holy water, an exercise in gratitude for my body, and meditated daily, an exercise in gratitude for my mind.

My last week there, my parents sat me down. They were so incredibly happy to have me home and to see the person I’d grown into… and was I ready to meet with some suitors, so they could find me an appropriate husband? I explained to them that I was not, nor would I ever be.

In a time of crisis, I did what any queer person would do in a time of crisis – I hoped right onto Tinder and began furiously swiping. There were no gay Balinese people though. My search escalated until one night I was riding my motorcycle around Rennon. I had heard that there were some gay sex workers that were there. I knew that the rumours were true because older family members had taken me a few times when I was young and made me watch as they threw rocks at them. Hours passed driving around those streets but I couldn’t find them anywhere, and I was defeated.

The next afternoon on a pensive walk around my village, the reality of what I had done to myself for all those years came crashing down. I was not half of anything. My Balinese identity encompasses me in my entirety, and I rejected all of myself in an attempt to validate my sexuality, and that went unnoticed until it almost killed me.

Those parts of myself are still learning to exist together. It’s a tremendous amount of work to make sense of them. I cannot be gay in Bali. I am expected to marry a high caste man to pass down my caste privilege, otherwise, I am selfish.

I have certain liberties in Australia, sure, but I struggle with racism. Fearful partners do not want any potential children to participate in Balinese rituals or customs, and that rejection is so painful. Regardless of the limitations that society teaches me, I know gay Balinese people are real because that’s me.

To constantly remind myself that shame is taught and is not mine is exhausting. Some day, I am just not strong enough and I dip back into my old mindset. To be a proud mixed race gay woman in our society takes a lot of sacrifice. I want desperately to break the cycle of rejecting part of myself in the hopes of gaining and respecting the other parts of myself. I wish I knew what it was like to be entirely one or the other, but I exist in a third space and maybe I always will.