Susie explores the ways that Aboriginal people, especially women, continue to be Othered by white-colonial ways of seeing.

Susie Anderson is a Koori writer from western Victoria who lives and works in Sydney. Her writing typically focuses on erasure of Indigenous narratives throughout Victoria and Australia, and attempts to reconnect within this fragmentation. She has been published in publications like The Lifted Brow, Rabbit Poetry, un magazine and was part of the anthology Growing Up Aboriginal in Australia. 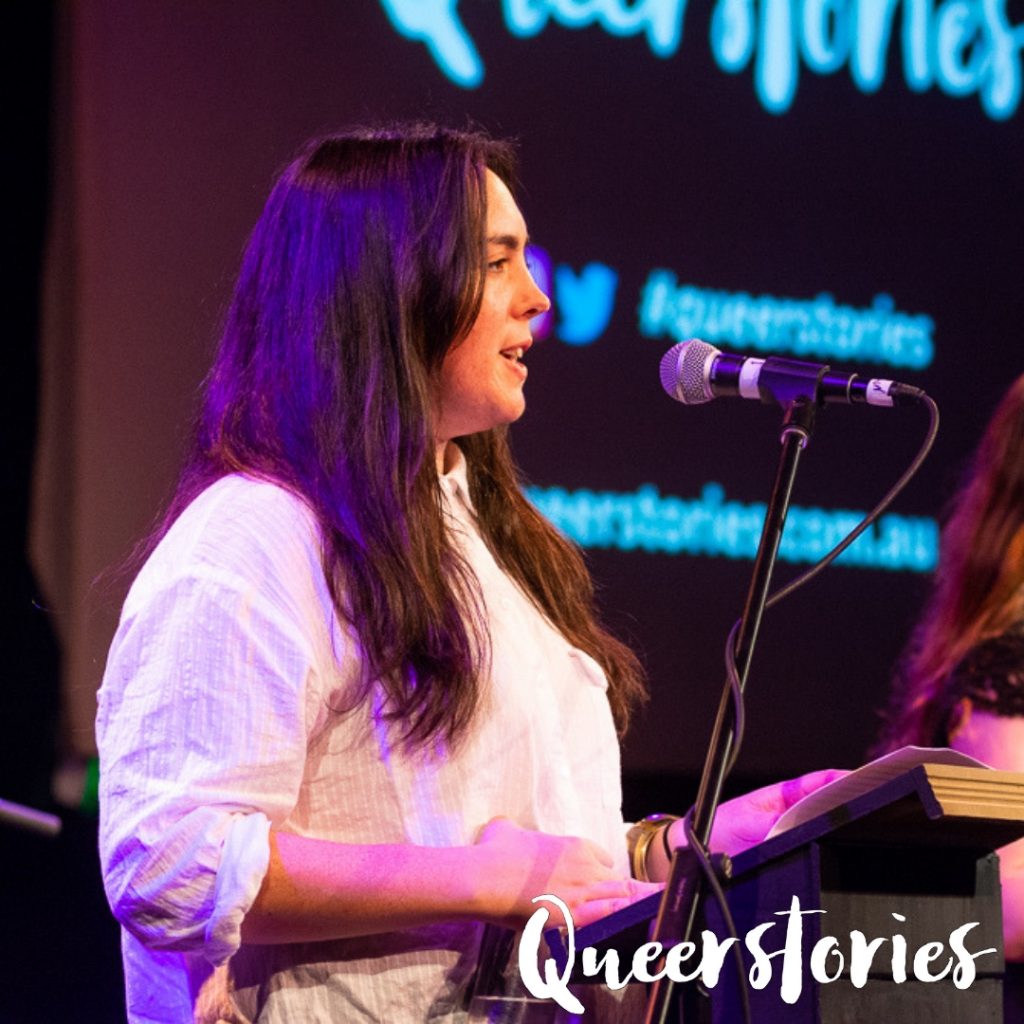 Susie Anderson is a Koori writer from western Victoria who lives and works in Sydney. She’s been published in publications like The Lifted Brow, Rabbit Poetry, un magazine, and she was part of the anthology, Growing Up Aboriginal in Australia. This piece is adapted from a story she wrote for Archer magazine and was performed at the Archer magazine launch in Sydney in March 2019.

Outside Redfern train station, there’s a rotation. Uncle usually wearing his Rabbitohs jersey with a cap, reading a novel. Or guitar-playing uncle, plucking at the strings while he has a yarn with somebody who’s dropped a dollar into his guitar case.

Most of the time, I walk out of the train station, doing what everyone else does. Keep my eyes low to the ground, think about where I need to be next; I’m that disconnected from the saltwater, Gadigal country I’ve lived on for nearly four years. A Freshwater woman, I keep my head down. Other times, I take in the mural opposite the station and feel the strength of the place. Want to show we’re connected. Work out how to pause the flurry of the commute.

As children who’d just learnt them in school, or needed the stability of numbers to help frame identities, we used to use fractions to explain who we were. My friend was a quarter Dutch and three-quarters Australian. I was one-quarter Aboriginal, one-quarter Australian, and the rest was English. It never felt politicised – it was just another part of what made up me, the same way my friend’s Dutch heritage was a part of her story. And, anyway, we decided we didn’t even look that different.

Until I was about 13, this identity was purely mine. But eventually, it dawned on me that this was somehow crucial to something bigger than me that people outside my family had opinions on whether I was Aboriginal, “or not.”

My cousin told me that her art practice making possum-skin cloaks is her way of embodying “sovereignty,” and, as Aboriginal women, personal sovereignty is particularly important to us. As well as losing land, culture, and languages to colonisation, our children were stolen from us, our bodies used by men for sexual pleasure, and we were put to work in the homes of white women. As Wemba Wemba artist, academic, and my cousin Paola Balla suggests, “The damages of patriarchy came together with the damages of colonialism.” The white gaze has always defined us: Through systematic oppression and the documentation of this through the archive, who it chooses to include and exclude.

In Talkin’ up to the White Woman, Goenpul theorist, Aileen Moreton-Robinson, uses life writing to understand how literature can subvert one-dimensional representations of Indigenous women. She explains how Indigenous feminism is talking back to the white woman by asserting our own subjectivity, that, “We have never fallen into the hypnosis of believing that those representations were our essence.” We know our true essence. Through individual sovereignty, we can reclaim our culture, land, and spiritual and physical selves.In the bar, I looked for my date. In real life, he was quite different from his profile picture. Not in a bad way – he’d just had a haircut, which in its own way was a nice effort.

I was being my charming and flirtatious date-self, despite the fact that he had elected to keep his phone on the table the entire date, with the sound on. I heard the Tinder app ding more than once.

I didn’t mind that so much. It was that he was looking at the TV behind me the entire time. He told me he grew up in Sydney in a migrant Italian family. And I can never tell whether I’m going to talk about my identity on a date, but that’s where this conversation led us.

Australians with no experience of non-Anglo culture often don’t know how to receive what I’m saying to them because they immediately feel attacked and defensive. Given this guy’s Italian background, I figured he would be somewhat receptive. And his response was along the lines of, “Oh, okay. You’re incognito, just like me.” Not having many Italian friends, I’m not hugely familiar with what it means to be an “incognito” Italian-Australian. See, in my mind, I wasn’t just like him. But it was better than the complete blank that I got on another recent date, or the heart palpitations I get when I realise I’m with somebody who might not believe me, or who would be made uncomfortable by me even saying the word “Aboriginal.”

I’ve always accepted my juxtaposing identities with a wry acknowledgement of the irony of the coloniser meeting the colonised. As with all complexities, my general line is that these things can coexist. While, as an adult, I recognise that being able to pass as white is one of my privileges. As a child, I wanted something that would easily orient me within my family. My simple solution back then was, “If only I looked different.”

Aboriginal women are constantly battling – whether one day, a minor skirmish or, another day, a full-on war – we’re battling the gaze of outsiders. We exist in opposition to the national identity of Australia, where, as Aileen Moreton-Robinson suggests, “White women occupy the key roles, constitute the norm and the ordinary, and represent the standard of womanhood.” This standard, imposed on me from my earliest years, had shaped the way I thought I wanted to be.

Mum used to say that it’s all down to how I feel. And it has taken a really long time for me to embody my culture without a little voice wanting something different, or me second-guessing myself. I recognise that my ability to pass is a privilege, and this body of mine is a colonial success. Yet, all these things can coexist.

She asked me if we could go back to my place. I said, “I have so many housemates.”

I don’t understand why she was reluctant to take me back to where she was housesitting in Balmain. Inside, she poured us a whiskey and I took in the surroundings. Only the second house I’ve been to in that area, it fits the stereotype of what I know to be true of this part of the “Inner West.”

It’s not the Inner West!

It was a narrow, sloping, refurbished townhouse. Artbooks lined the walls, as did a selection of Aboriginal art, including Pukumani poles from Tiwi Islands. I told her I’d visited Tiwi with my last job, and explained that one of my tattoos is inspired by one of their best painters. It’s a round celestial interpretation of a yam ceremony, rings around the full moon. The other tattoo on my ribs is after a significant animal for south-eastern Aboriginal communities, a black cockatoo wing.
She went quiet and traced the lines.

As an artist, I find it fortifying to hear my cousin affirm what, in my heart, I know to be true: Making traditional objects, in spite of the interruptions from settlers across the last 230 years, is a radical act. And my way is through writing, talking with family, sharing stories about what happened to those who came before me, telling the story of my life, my dad, my aunts, our nana, making our languages live again. It is an assertion of sovereignty to reclaim ownership of traditional cultural practices, and we feel our ancestors through this reclamation. To try to articulate it feels complicated, and I hope this article and this reading does some work in that area.

Everything is intertwined with the idea of Country. For us, it’s a concept, like blackness, that strengthens culture. I’m hesitant to give it such concrete terms but, having grown up with this, it’s what I feel I’m charged to do, and I’m more at peace with the gaze from the outside world.

To hear my cousin say that her art practice is a sovereign act made me feel like I’m not walking this path alone.

Approaching Redfern Station, I take out my headphones, change from my morning coffee rattling around in my pocket. Menulog people flank the entrance, getting in the way of commuters. Muscling my way past, I grab the change and say, “Good morning, Unc,” toss in the coins, and move on through the crowd.