Steven Oliver: Because of Her

Steven shares his memories of his mother, and reflects on how she impacted his life as a gay, black man.

Steven Oliver is a descendant of the Kuku-Yalanji, Waanyi, Gangalidda, Woppaburra, Bundjalung and Biripi peoples. He has worked with numerous theatre companies and arts organisations across Australia but became notorious with ABC’s hit sketch show Black Comedy. He flies about the country working as an actor, writer, MC, keynote speaker, poet, wannabe cabaret performer or as he simply likes to refer to himself, a black of all trades. 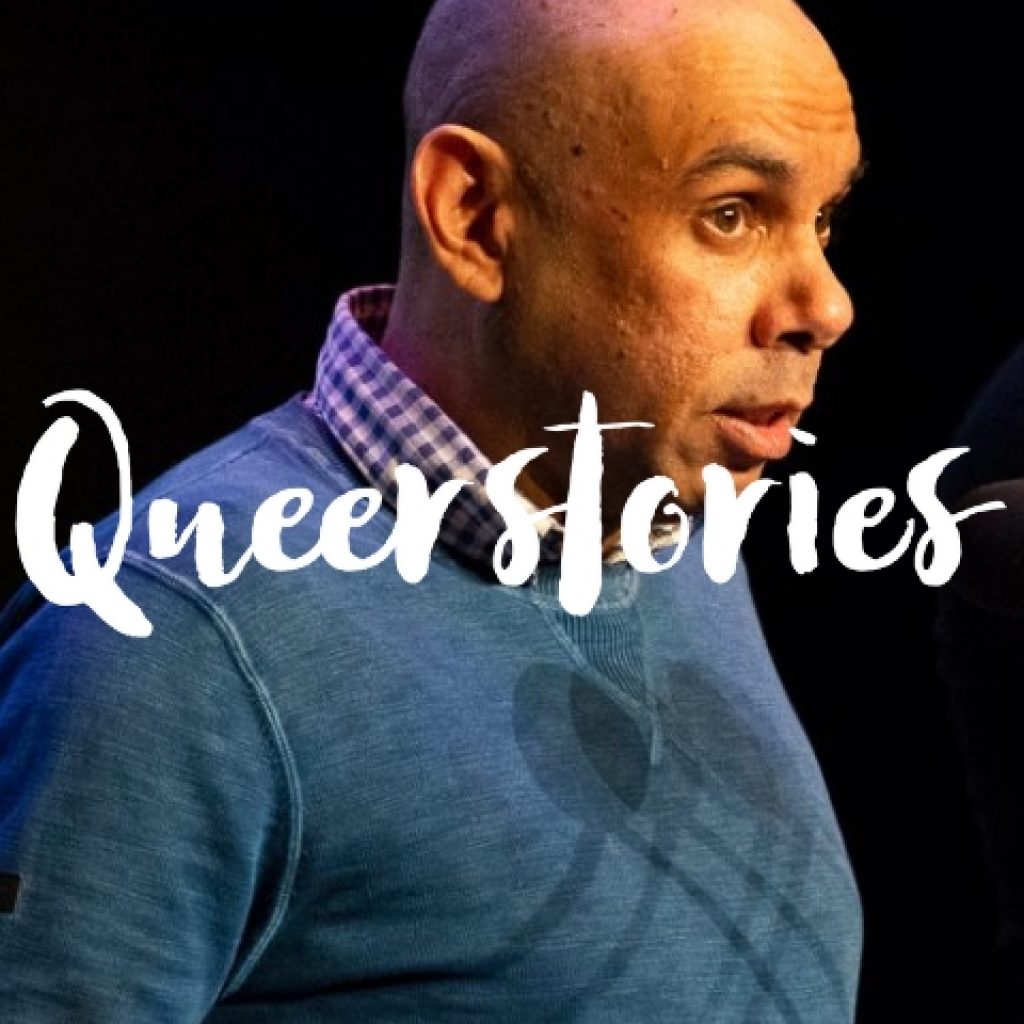 Hi, I’m Maeve Marsden and you’re listening to Queerstories – the podcast for the LGBTQIA storytelling night I host and program. I run Queerstories regularly in Sydney, Melbourne and Brisbane as well as one off events in other cities and towns. Check out maevemarsden.com for dates and details.

This week, Steven Oliver is a descendant of the Kuku-Yalanji, Waanyi, Gangalidda, Woppaburra, Bundjalung and Biripi peoples. He has worked with numerous theatre companies and arts organisations across Australia but became notorious for the ABC’s hit sketch show Black Comedy. Steven performed this story at Queerstories in Lismore, and Brisbane, as well as at the Sydney Opera House. Enjoy.

I’ve been asked if I could share a queer story. I’ve decided to steer clear of drinking beer stories. You know, the full of cheer, stick out your rear, hope that men leer stories. That instead I’ll share a near to here, dear story, about struggle, about strength and overcoming fear story that inevitably you may just think to be a mere story. I just hope I haven’t already fucked it up and made it an unclear story with all of this rhyming so I’ll stop now so, you can hear the story.

A story that begins in a small outback town called Cloncurry. Where red earth is matched only by red burnt skin. Where dry riverbeds have their banks populated by a small community of mostly Aboriginal, some white, some Chinese and some afghan fringe dwellers. Their homes complete with windows that are simply squares cut out of corrugated iron. Their kitchens, if they had one at all, inhabited by woodfire stoves where smoke would escape through steel chimneys that protruded through holes in tin rooves. The smoke linking their homes to the sky, as their floors linked homes to the earth. Red earth in fact but if you were flash, you had lino. Still, flash or not flash, there was most definitely an old wire bed covered by a lumpy straw mattress for people to rest their heads.

Bathrooms didn’t exist. In their place were makeshift showers, toilets and bathtubs again made by the ever so adaptable corrugated iron. As for water? That was provided by a single tap used for washing, cooking and drinking, making your average office water cooler look not much of a social gathering place after all. Yet, despite things lacking, life was about what you had, not what you had not and though people didn’t have houses, they had homes.

One of these homes belonged to a young Aboriginal couple named Steve and Irene. Though Steve originally from Cairns and Irene from Burketown, Cloncurry was the place they had met, would raise their family and though no longer living, still lay side by side beneath the red earth that they once courted upon. It was the place a romance blossomed and where love blossoms so too usually, do children. Five, in fact. Four girls and a boy – Josephine, Rosalind, Sharon, Charmaine and Stephen Jnr but it is Rosalind whose story will be told today. And considering I’ve already used two and a half minutes out of eight in just getting here, I’d better get my black arse into gear story, sorry I couldn’t resist.

Rosalind, the second child, was born in the same year as musical icons Michael Jackson and Madonna. Though these two icons were born in the month of August, Rosalind was born seven months earlier on the 23rdof January 1958. Her musicality and dance moves may not be as slick as her peers in age, but there is so much more to this woman that makes her an icon in her own right. This year has seen Rosalind turn 60. A number that is literally a lifetime ago from when she was 23. An age where she had already given birth to seven children. I know right? I try to picture me as twenty-three-year-old with seven children in tow and all I see is me trying to run away from them while I chase after some man but luckily for Rosalind’s children, she was a much stronger character. One who embraced motherhood and instead of neglecting her children, neglected herself in a lot of ways.

Of the seven children, there were four boys and three girls. Sadly, two of the boys had passed away, one being a breach birth that doctors failed to detect. A failure that took the baby boy’s life and almost took Rosalind’s. She was twenty at the time and never got to see or hold the child. No family members were immediately notified and during times of recovery, Rosalind often found herself alone in a rocking motion as if she had the baby boy in her arms. A baby boy she never got to name. But, as I mentioned, Rosalind is a strong character and despite carrying a huge hurt she went on with her life continuing to be a mother to her five remaining children Shawn, Steven (the sexiest of the five, you know it’s true, my sister down there), Linda, Corrine and Romana. Five children who never once did she show her hurt to, only love.

I’m assuming that by now, you’ve realised Rosalind is my mother. Though only seventeen at the time of giving birth to me, making me forty three (I know, black don’t crack), I find it strange that I look back on our relationship and never once do I picture her as a young woman who was never prepared for motherhood. That when I do look back, I see a woman who was my guide, my teacher, my disciplinarian, my nurturer, my advisor, my provider, my protector, my mother.

There are certain times with my mother I specifically remember for reasons unknown, other than the fact that my brain has decided these moments were especially worth remembering. Sometimes they were lessons in life, other times they were simply funny moments. For example, I remember a piece of advice when one night, living in south Townsville, I would’ve been around 11 years old. I was on the lounge floor with some of my siblings while others were seated on the lounge with my mother while she knitted a crocheted blanket that she would so often do in her youth.

We were watching an episode of classic aussie drama, The Henderson Kids and in this episode, some bully was trying to get the Henderson sister to do something to prove she was tough. We watched the episode intently as the bully kept pushing the Henderson child to hurry up and do what was required to prove herself. My mother looked at us kids quite seriously and said, “If anybody tries getting you kids to prove yourselves to them, you tell them to fuck off!” A piece of advice I carry with me to this day.

Then there were the moments that make me laugh and embarrass her. Though in truth, I realise that when you grow up poor, desperate times call for desperate measures so there is no shame, mostly. This time involved me as an eight-year-old boy who she had gotten to go into a chemist to buy a pack of Panadol. I handed the woman our last fifty and upon giving me the change, which should’ve amounted to around forty-eight dollars, she had given me one hundred and eight dollars. I walked back to the car confused and looked at my mother with the money in my hand and said “Mummy, the lady gave me two fifties instead of two twenties” to which my mother replied “Well don’t just fucking stand there! Get in the fucking car!” Whenever I tell that story with her near, I tease her and say “Yeah, good morals you were teaching your kids ay Rosalind?” And she says real shamed way to anyone listening “Oh, well you know, it was our last fifty and we needed to get a few things.”

I wish I had more time to share more of her story and though I don’t tonight, I’m sure one day I will. And I will tell a tale of a remarkable woman who had spent the first ten years of her life, mostly growing up in third world conditions. Who had become a mother at fifteen and given birth to seven children by age twenty-three. Who had lost two children but not the strength to be a mother. Who had survived domestic violence and was still able to love. And I may or may not finish it with this poem. I just thought that since I began with rhyming, then so too should I finish. This poem is in line with this year’s NAIDOC theme ‘Because of her we can’ and because I’m extremely creative is called, Because of her I can. I know, genius.

My existence on this land without resistance deeply understands a simple truth, because of her I can

She who nurtured as I grew and knew a way through the unplanned, and with a single hand did raise a man, indeed because of her I can

And in the times, I face adversity, I draw on strength given by she, and in a world that’s ruled by cruel and hateful from men I stand, raised hand and say defiantly I will never be ashamed of who I am

A gay, black man and it is because of her I can

And thus, the greatest of her teachings a greater love forever reaching, breaching walls, her call beseeching I stand tall, her arms outreaching stops my fall, says rise, to realise the sky’s a lie, it’s not that high, now fly

And because of her I am.