Sophie reflects on the ritual of the toothfairy, and on the importance of one’s teeth. Sophie features on My Mother’s Kitchen, a Queerstories collaboration with Google’s Creative Labs: mymotherskitchen.com.au

Sophie Harper has worked in film as a director, editor and producer, and in government film institutions, the Australian Film Commission and Screen Australia. In 2009 she moved to Denmark to teach at the European Film College where she was Vice Principal and Documentary Teacher. She is the creator of Not By Accident, a documentary podcast series about becoming a single mother by choice. Sophie is one of the featured storytellers on My Mother’s Kitchen. 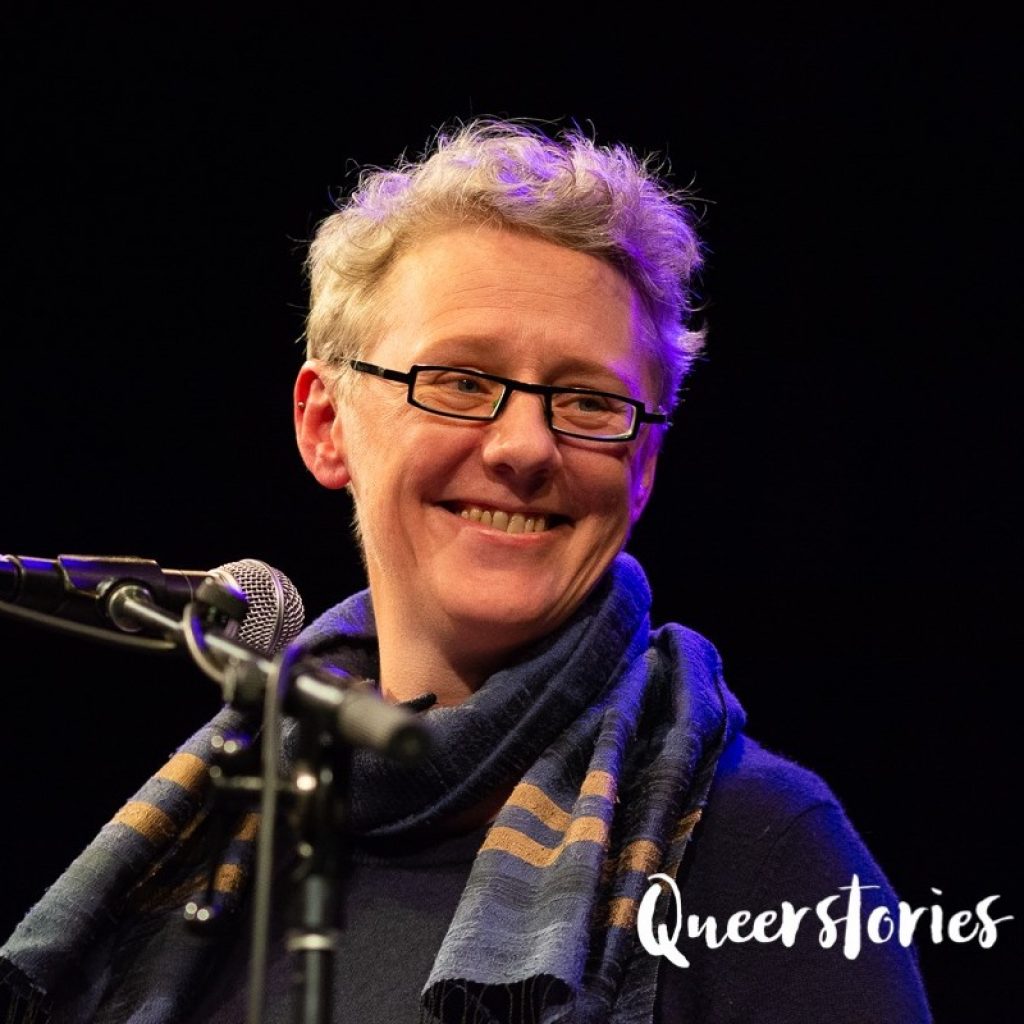 Sophie Harper has worked in film as a director, editor and producer, and in government film institutions, like the Australian Film Commission and Screen Australia. In 2009 she moved to Denmark to teach at the European Film College where she was Vice Principal and Documentary Teacher. She is the creator of ‘Not by Accident’, a documentary podcast series about becoming a single mother by choice. Sophie is one of the featured storytellers on the ‘My Mother’s Kitchen’ podcast, a Queerstories partnership with Google’s Creative Labs. Make sure you check it out.

It’s the tone that makes me soften. I reach for my glasses and squint as she flips the switch, leaps onto the bed holds out a little clenched fist.
“I woke up because I felt different. Then I realised something was in my mouth!”
*Audience laughs*
The chubby little fingers open.
And there it is. Shiny white and perfect on her palm. Her first baby tooth.
*Audience laughs*
What a bunch of softies.
*Audience laughs*
Six years ago, I woke up at 3am feeling like something was different. It was a hot summer, I was so heavy, and uncomfortable, two weeks overdue. Those bloody practice contractions. Ten days of false starts. So I checked myself.
*Audience laughs*
Still nothing. Might as well pee since I’m awake. So, I roll out of bed, one step and ‘WOOSH!’

How did my body know?! I grabbed a towel and just like her now, I headed straight to my mother’s bedroom. “Are you awake!? Something’s happened! Can I turn on the light?”

I think of telling her this, but I’m not sure it’s the right moment. She is so proud and excited as we study the beautiful little white tooth and poke around in the gap to feel the jagged edge of the new one.

I reckon this might be the tooth that came through first. When she was about 9 months old. I remember it erupting through, and my mixed feelings. The tiny baby stage was over and I didn’t feel ready to let it go, emotionally. But the next bit would be wonderful too. I knew that. Sitting up, commando crawling, first steps, pre-language sounds, the controversial “da-da!”
*Audience laughs*
Now those things are behind us. She’s six , she’s in year one. It’s monkey bars, times tables, craft projects and chapter books. She points at clouds and tells me: “that’s cumulonimbus”. Or at birds by the lake, “A purple swamp hen!” One day Siri calls me Diamond! Me! Diamond! How did she make Siri do that?!

I’m overwhelmed by work, and by everything and one day, one night, my laptop crashes to the floor and I shout at myself and then I shout at the crowded desk that squeezed it out, and I shout at gravity, and she looks at me wordlessly. She takes a step closer, she waits for my flailing to stop. She knows it’s not about the laptop. She knows me well. She carefully comes in for a hug and I burst into tears. She’s got my back. I got very lucky with this kid.

As each stage ends I seem to mourn the one we’re leaving behind, but then incredibly, I find I love the new one even more. I love her even more. Who’d have that could be possible?
Back to the teeth: lately her baby teeth have become too small for her mouth and she has gaps. Adorable gaps. When I was six I developed a big gap between my two front teeth. I loved it. I could whistle at last. But it was short-lived. They soon fell out. Adult ones grew in their place, too big for my face. I was never cute again.

There’s a period between the time baby teeth start to fall out and the worst of puberty which I think most of us would be happy to have no photographic evidence of.

Gangly, uncoordinated limbs, bad haircuts, personal hygiene challenges, questionable fashion choices as we work ourselves out. And oversized, over-crowded adult teeth. Objectively adorable childhood basically ends with the loss of baby teeth. I mean, it does! So, is it really any wonder that I got all teary when her first one started to wiggle?

I’m feeling this more acutely because of recent confronting events. I don’t know why I am telling you this, but I turned 45 this year. I am no longer early 40s. I can no longer deny being middle-aged. I still think of my parents as being pretty much the same as their 45-year-old selves, but they’ve always been much older and much more grown-up that me, and I can’t quite reconcile the reality.

When I leave the barbers I, I struggle to believe that hair on the floor is mine. I am fully silver. And not in the fox way, I’m pretty sure.

But look, this was all massively compounded a few days after the 45th birthday microbrewery and cake party. The aging and decay thing I mean. I had to finally confront my twice failed root canal.
Yeah.
More than 15 years ago this – this little one – this little infected front tooth forced me to ask for warm beer at the Columbian.

It was sensitive to cold! Steven my dentist sorted it out, gave it another 10 or 12 years. But then pregnancy. That is not good for your teeth. Infection came back. I ignored, delayed, it was the money, the knowledge of what it would be like, I put it off until things were really bad. Then, root canal again. Will it… won’t it… And within six months, nope. $5 grand here, $5 grand there… And that little sucker’s got to go. So here I find myself, 45 and four days old, home from a traumatic couple of hours that genuinely rival childbirth, they really did, looking in the bathroom mirror, pale and shaken, old and haggard, bloody and swollen, and I remove the little plastic place-keeper and I take a look at myself. Fuck. It’s not good.

Pretty soon I discover the gap makes me whistle anew.

Ffff! Like wind on a beach. But with the plastic tooth in, I sound a bit slow and a bit drunk. No public appearances for a while, I decide.

*Audience laughs as Sophie does something we cannot see*

Now it’s become almost normal. It’s become like taking off your bra when you get home on a hot day, like kicking off your shoes, I spit the little bugger into a cup as soon as I walk in the door. This is temporary. Something unpleasant and expensive is around the corner. My dignity will take another hit. I will not be saving for a house deposit.
I start to bare my gap now, to point out, “we’re twins.’ But thankfully I stop myself.

For her, obviously, it means something very different. Losing a tooth is like coming of age. In the weeks that follow, quite a few times I notice her referring to herself as being grown up. For her, it’s the brink of autonomy, of maturity, of independence. I can see why that’s something to be excited about. I want those things for her too. But even so, I will miss my baby.

I can’t make time stop. I’m hopeful, regardless of the inevitable loss of objective cuteness, that it’s going to keep being true that each age and stage is even better than the last, even though it doesn’t seem possible.

But anyway, here we are in bed and I tell her, you know, that’s it’s 3am, Don’t expect the tooth fairy tonight. She would have already been.
*Audience laughs*
Obviously, I’m not keen to get out of bed and I haven’t got any cash!
*Audience laughs*
So I need to delay. I knew this was on the horizon, I should have been prepared. Classic parenthood mental load and guilt. Anyway, she begs me, just in case, to write a note.

“Dear tooth fairy, thank you for coming to collect my tooth. I don’t mind about the money, it’s ok if you don’t leave any, but please could you leave my tooth so I can give it to my mum?

I don’t want her to be sad and I know she loves it.

It is adorable so I guess that’s why. Lots of love and kisses, Astrid.
There is a constant, through the stages of what she likes to do and what skills and capabilities she has. She is the most kind and empathetic and patient person I know, certainly in relation to me. The constant, through all that changes, the constant is HER.
And I will always have this first precious baby tooth.