Simon Copland is a PhD candidate in Sociology at the Australian National University. He is a freelance writer who has been published in the Guardian, SBS Online Australia, BBC Online, and co-produces and presents the podcast Queers, not to be confused with the podcast you’re currently on, which you should all subscribe to. Simon is the co-editor of the online publishing site Green Agenda. 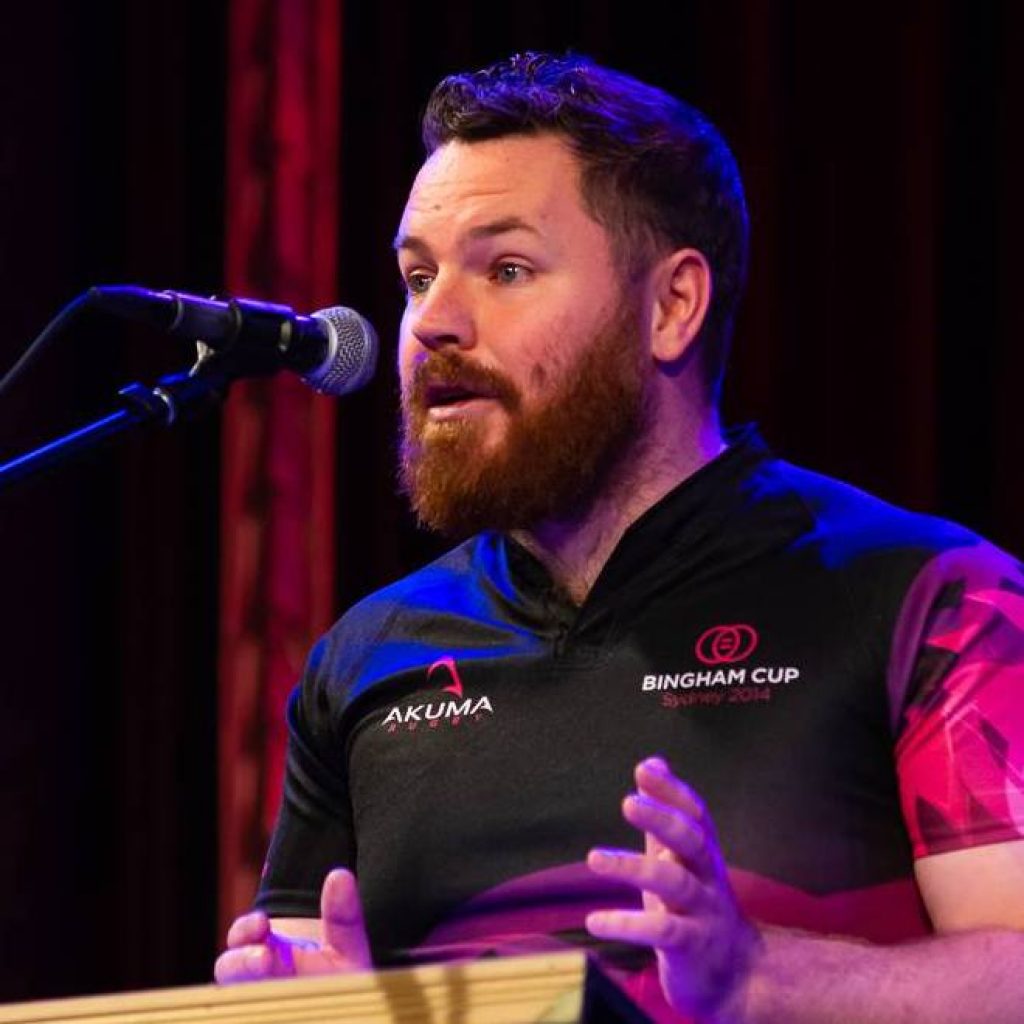 Simon Copland is a PhD candidate in Sociology at the Australian National University. I have been mispronouncing his name on this podcast and at events for two years by calling him Simon Copeland, but his name is Simon Copland – He’s the same guy that you heard earlier in the podcast. He is a freelance writer who has been published in the Guardian, SBS Online, BBC Online, and he co-produces and presents the podcast, Queers; not to be confused with the podcast you’re currently listening to, which you should all subscribe to while listening. Simon is the co-editor of the online publishing site Green Agenda, and he has a story published in the Queerstories book, which you should buy. Lots of plugs in this introduction. Simon Copland.

“Hello, is that Mr Simon Copland?”

“This is Sandra from Qantas. We’re waiting for you at the gate to board your flight.”

It took me a moment; a very dumb moment. Then, everything came rushing back: The night before, the booze, the taxi I had booked for two hours before, the flight to a work retreat I was supposed to be getting on right now.

“No, your flight is definitely today. So I take it you’re not at the airport?”

“Okay. Well, when you get here just go to the ticket desk and we can book you on the next flight.”

I would like to say that this is the first time I’ve ever missed a flight but that would be a lie.

In 2009, living in Sweden, I booked a weekend away to Amsterdam. When I got to the airport, I realised that I read the arrival time on my ticket, and not the departure time. I have yet to visit Amsterdam.

I’d really like to say that I’ve only ever missed two flights in my life, but again, that would be a lie.

Later in 2009 – yes, the same year – my parents visited Sweden, where I was living, and we took a weekend away to Latvia. We thought our flight was in the afternoon. It was in the morning. We spent one more night than expected in Latvia. This missed flight, however, in August 2014, has a special story.

Facebook Messenger. Martyn Tweedie, my Scottish boyfriend, sitting on the other side of the world, having some drinks and starting to fret.

I was up and out of bed as fast as you can imagine. My bag slammed shut, a taxi called. No shower, no brushing of my teeth – nothing. In the cab, I call my boyfriend James.

Now, in case you think you’ve just had a stroke, or that I’ve forgotten the name of my boyfriend in the last two minutes, no. I have two boyfriends. So, to clarify, there is Martyn who, at the time of this story, was living in Scotland, and there’s James, who was in Newcastle – the Newcastle in Australia, not the Newcastle in the UK. It’s a bit confusing – for a roller derby tournament, and getting the train to Brisbane back that day.

I called James, panicking, to let him know what had happened. He laughed, and then laughed some more. He’s a very caring boyfriend. But, in all honesty, I deserved it. He posted on Facebook a little while later: “Arriving at the train station on time makes me realise I made responsible alcohol consumption decisions last night.” “Ping Simon Copland.”

In fact, when James first read this story, his response was that while Martyn comes across as a very supporting and sweet boyfriend, he comes across as a bit of an asshole, to which I responded, “Truth is a defence in case of defamation.” To be fair, he never threatened to sue me for defamation. In fact, I stole that joke off Maeve, but now that I’ve referenced you, Maeve, you can’t sue me for plagiarism.

To know this story, we have to go back a little while. I moved to Brisbane in 2013. Having gotten in a bit of a rut in Canberra, I decided to join a gay rugby team, The Brisbane Hustlers. I wanted to do something new.

I will always remember my first training. It had been raining in Brisbane over summer a lot, and our fields were waterlogged, so we trained on an indoor beach volleyball court. We started with fitness run by hired CrossFit guy; fucking CrossFit.

His idea of getting fit was making us run until we puked. He was such an asshole. Then, we learnt how to tackle. I was paired with another Simon, one of us getting on our knees, grabbing the other by the legs, and dragging each other down. To be fair, for a bunch of gay dudes, we didn’t need that much practice. Actually, no, I lie. Some dues were terrible at it.

I started training every Tuesday and Thursday, and a couple of months after that I played my first ever game. My strategy in the first game was very smart – spend the entire game trying to anticipate where the ball was going to go and be prepared for the next tackle. In all reality, it was a rouse to avoid as much contact as possible. But, as the nerves started to dissipate with every tackle I survived, it was the very physicality of it that I loved the most. There was something to me almost animalistic about it. At rugby, I was more in touch with my body than I’d ever been – with what it could do, with what I could do with it, and with what I could put it through. I relished the pain – sounding very strangely – and the bruises. And James liked to press the bruises.

And I loved the feeling like I was doing something physical with my sack of meat. To be fair, gay rugby has a lot of tackle.

Just another side: When I gave the draft of this story to James, his feedback was, “More dick jokes.”

And Martyn insisted I make lots of joke about tackle, so I’m sorry about that.

But this feeling of physicality was not just one I had on the field, and this is what takes me to that fateful night.

It was the lead up to the Bingham Cup, the biannual Gay Rugby World Cup – this year being held in Sydney – and in the weeks leading up to the tournament, The Hustlers organised a gay rugby staple – a rugger bugger, or in non-homosexual terms, a strip show. It was like our Monty… It was a strip show. I’ve just gone blank. I went to say Monty Python. I’m like, “No, that’s not right.” I shouldn’t try and make things up on the fly.

I agreed to perform. Now, despite the incredible wit, humour and panache I have displayed tonight, it may surprise you that I am not a natural performer. Being on a stage kind of terrifies me. I am the person who will cower the moment that audience participation is raised in any show. I don’t even really dance that much. Take me to a club, and I will find a seat and watch everyone else.

Whenever I go out, people think that I must be miserable, but I’m not. I’m just a loser.

But for this, I felt almost none of that. I was excited, and emboldened, and ready to do something new. For weeks before, I practised with others in my team, learning a striptease to a mash-up of Queen with The Backstreet Boys.  So gay.

And it was great. I danced, I made out with boys, I drank far too much and I had an amazing time. Rugby brought out a comfortableness in my body, one I was willing to put on the stage. In fact, if it wasn’t for that, I wouldn’t be here tonight. The only difficult part I found was the one moment in the dance – because it was a choreographed dance – where I was told to freelance to the part of Everybody (Backstreet’s Back). The bit in the song where they say, “Am I sexual?” – I can’t sing, my mouth is a bit dry – “Just do something sexual,” I was told.

I got on the plane, certain I was going to throw up as we took off. In my hungover, anxiety and regret-filled haze, I stared out the window, panicking I’d left the house in such a mess that James would be pissed off. Anyone who has ever seen the state of James’ bedroom would realise how dumb this fear was.  The only thing that he did report was that there was still a half-eaten kebab sitting on the lounge room table. I have no memory of this kebab – buying it, eating it, or even seeing it as I rushed out the door. James sent a message to Martyn that simply read, “Drunken mess.” I made it to the work retreat, and I was the butt of every joke from my colleagues for the entire time.

A couple of weeks later I played at the Bingham Cup. It rained, and it rained, and it rained some more. And it was a muddy mess. In my third game, someone scraped a boot along my thigh, and I came out from a ruck with blood seeping out of my skin, across the whole thing. I looked at it and then I went for the next tackle.

For the next two days, I had to have my thigh strapped from my knee to my waist. It was very uncomfortable and the scar lasted for months. But, it was amazing. It was physical and exhausting, and just about as gay as gay can be. It was all balls and tackle.

What else could I ask for?

I want to be clear, I don’t tell this story to celebrate the drinking. In fact, the drinking culture of my rugby club was one of the things I really didn’t like about it, and this event was a consequence of that culture, and one that could have had serious repercussions. I could have lost my job.

I tell this because, for me, it was a moment in time where I managed to let go of all of the preconceptions I had about performance and about what I could and should do with my body. I am not sure I have ever felt so confident with being exposed, with being vulnerable, and with being willing to perform. And as I’ve said before, if it wasn’t for that team, I wouldn’t be here tonight telling this story. I mean, the story wouldn’t exist, but you get the point.

Today I don’t play rugby anymore. A concussion earlier in that season, which scared the shit out of me, plus the fact that Canberra doesn’t have any gay teams has taken me out of it. Today, I power lift, and while it’s not quite the same in some ways, being in sports still gives access to tackle.  But I still look back on those days and I smile. And I will never forget the time I missed that bloody flight. Thank you.