Scout Boxall is a non-binary comedian, clown and low-fi misandrist based in Naarm (Melbourne). After bursting onto the comedy scene in 2018 and making it to the Raw Comedy National Finals, they trained at the Philippe Gaulier clown school and performed in the Edinburgh Fringe Festival under the Tessa Waters Mentorship Program. When Scout isn’t transcribing court documents for their day job or writing and performing comedy, they can be found making period garb and crafting characters for LARP (live action role-play). 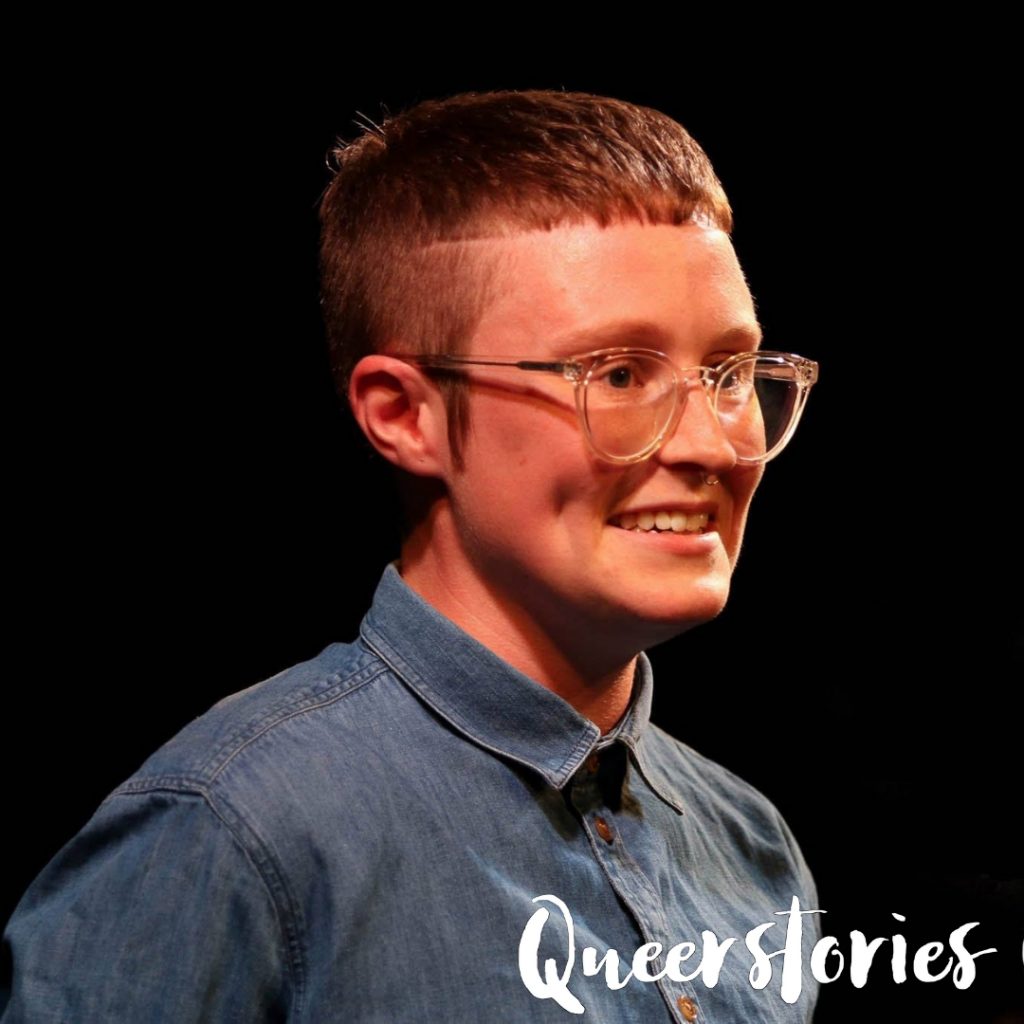 Scout Boxall is a comedian, clown, and low-fi misandrist based in Naarm. After making it to the Raw Comedy National Finals last year, they trained at the Philippe Gaulier Clown School and performed in the Edinburgh Fringe Festival under the Tessa Waters Mentorship Program. They performed this story in Melbourne in 2019.

Last year, I went to a footy oval in Parkville and I killed a man. I stabbed him in the gut, and then when he groaned and begged for mercy, I shoved his body in the dirt and put a foot on his gut to pull the blade free. And someone blew a whistle, and the dead man rose up, and he shook my hand and he said, “That was actually pretty good.” That was my first experience of LARP or Live Action Role Play.

I was wearing a thrifted kilt, wielding a latex sword borrowed from a mate, and I joined a couple of hundred other players, and I lost all touch with reality for a few hours. I was fighting in between traffic cone palisades, I was trading blows with enemies while dodging flying arrows. I became the intrepid warrior I wanted to be as a kid. And one year on, I’m fully addicted, like, fully addicted.

I attend swordcraft, which is a pre-1600s Warhammer universe battle game and quest world, each week, religiously And a couple of weeks ago, the LGBTQ+ LARPers of Victoria and I braved 40-degree heat in full armour to march in Pride.

A lot of the people watching Pride, as we were marching, were just saying, “We don’t know what you’re doing, but we love it!”

LARP is basically Dungeons & Dragons for people who have a greater disposable income, an unquenchable thirst for escapism, and far lower thresholds of self-consciousness. We get up 400 players in weekly battles, and swordcraft’s week-long events are the largest LARPs in the country. We fight with weapons, and they look real but they’re adapted for safety. They have spongy, padded arrow tips, replica carbine rifles from the 16th Century with bands made from surgical tubing that are fired with a slingshot mechanism.

And, if you ask someone who they are in character at LARP, they will reply with something like, “I am Xenobius of Eldinor, Warrior Elf of Chaos. Chief Warrior Elf of Chaos. I was abandoned as a child and taken in by the Priests of Darkness, and now I wish to fight for my own name.” And then, later on, you find out they’re a plasterer from Dandenong called Geoff.

The beauty of LARP is that you get to be a protagonist and to build a character in a world that fulfils your deepest desires for power, wealth, status, belonging, and excitement. LARP sometimes turns into a game of 100 protagonists and no secondary characters, because who wants to be locked in an algorithm of wake, work, pay bills, cook meals, honour your siege and lord, call your parents? That’s life.

LARP is also one of the few places where adults have permission to indulge their imagination or to pursue crafts that are rarely considered worthwhile or commercially viable in the outside world, but mostly to be part of a community that embraces the things that we all copped shit for in high school, whether that was painting Warhammer figurines, doing spells in our backyard to see the elves, watching anime, or learning Latin by correspondence, as I did.

You’d never guess, would you?

Swordcraft is a really broad church, and a very complex, social and political world. You get ruddy-cheeked tradies and cops drinking mead alongside polyamourous purple-haired anarchist uni students. You get Viking re-enactors duelling with traditionally trained Samurai swordsmen. You get high fantasy folks who love wielding staffs and spells. And then you get folks who tend more towards re-enactment, who love using replica period weapons, hand-sew their own clothes to patterns taken from archaeological finds; the real history nerds of the LARP world.

The first time I hit the  battlefield I went by she/her pronouns, but I was usually assumed to be a weedy guy instead of a gutsy tomboy because, in the heat of battle, anyone with short hair, wielding a weapon, and wearing more than a corset and elf ears is usually considered to be a dude.

I’m a long-bow archer, not to brag.

A couple of times I would fire a shot down a shield wall through a line of fighters, and I would hear someone cry, “Get him! Wait, no. Get her!” And by the time they’d figured out who or what I was, I’d already shot another three arrows and killed them where they stood.

In LARP, my androgyny made me kind of lethal, and I really liked it. It reminded me of when I was a kid, and when I really relished being a little bit of a genderfuck. In high school, I went through a series of ill-advised dykey short haircuts, and I got my aunt to alter all the shirts and shorts I bought from Lowes to fit my tiny body.

I would hang out in the boys’ section at Target and General Pants, and I’d just run my hands over the racks of clothes. When I was 15, I downloaded If These Walls Could Talk 2, illegally on PirateBay, and watched Chloe Sevigny walk into a 1950s butch bar with slicked-back hair, breasts bound with bandages, slacks, and an over-sized blazer, and I literally felt my body ringing and shuddering like a bell. The next day I went to the chemist down the road from my house and bought ten packets of bandages.

For about a month, I would go to school – I would stash the bandages in my PE bag – and then I would wrap my chest up good and tight in a bathroom cubicle. Soon enough, my mum noticed the red and puckered skin around my ribs, and then she caught me binding at home. She took the bandages gently out of my hands, and she said, “Don’t do that ever again, Mads. You’re gonna hurt yourself.”

For the record, she was right. I had no idea what the fuck I was doing. I was binding unevenly, too tight and with the wrong type of material. I’ve felt light-headed and it was hard to breathe, and my chest ached but I was so obsessed with chasing that euphoria, that ringing bell. Binding with bandages like I did, or duct tape, or clingfilm, or too-tight sports bras – particularly for full days at school or work – puts a huge strain on your breast tissue, your skin, your back your ribs.

Whenever I’ve been in a really difficult situation, even before LARP, I’ve imagined myself as going into battle. My mum and sister are on either side of me, and they’re fastening this golden armour around my body, and it’s the most intense, powerful feeling of being loved, and held, and protected.

When I was verbally and emotionally abused by a director in front of the entire cast and crew of a mid-summer show, – gay’s can be cruel too –  the armour was there. When I commuted to work past signs saying “Vote No” and had pamphlets stuffed in my letterbox calling my queer family paedophiles, and abusers, and devil worshippers, the armour was there.

Then, the first time I wore real armour on the battlefield, I felt that same strength, and self-assurance, and self-possession flood my entire body. I loved the delicious feeling of being encased in metal, which is balm to an anxious egg, like myself.

The next day, I bought a white binder online, which I’m wearing tonight. Wearing this binder is somewhere between a hug and a breastplate. I love the way it changes my body and how it feels, how it appears and takes up space, how my clothes fit off my shoulders. It’s given me a greater appreciation for my body’s gentleness and toughness, all its contradictions – my wiry armpit hair, my puckered thighs, and my strong calves, and my soft belly.

My binder is everyday armour, which helps me weather this world that we all have to live in, a world of insidious binaries, crushing intolerance, and it’s something that lets me live life, like LARP, as my own protagonist, on my own terms, always shifting and evolving.