Robyn Kennedy tells her tale of victory over the Sisters of Malevolence.

Robyn has worked at senior levels in both the public and not for profit sector working across social and affordable housing, homelessness, Aboriginal housing, disability and health. Robyn is a proud 78er with a long history of involvement in LGBTIQ activism commencing in 1975 when she joined the Executive Committee of CAMP NSW. She was an active member of the Gay Task Force and is currently the Secretary/Treasurer of First Mardi Gras, a community not for profit association for 78ers. Robyn was elected to the Board of Sydney Gay and Lesbian Mardi Gras in September 2017. 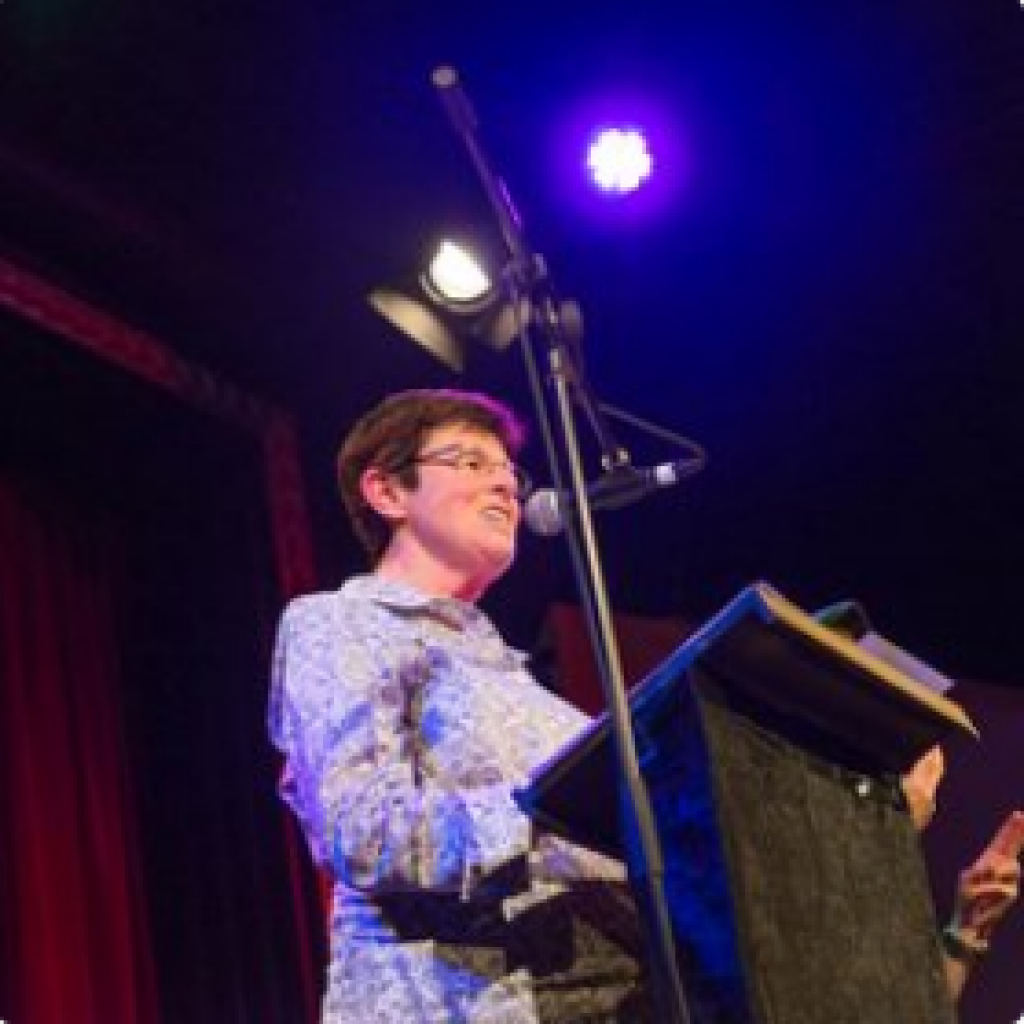 Hi. I’m Maeve Marsden and you’re listening to Queerstories – the podcast for the LGBTQIA storytelling night I host and programme in Sydney and Melbourne. This next story was performed at a special Queerstories event featuring ’78ers, those who were involved in the original Sydney Mardi Gras protests in 1978. Next up – Robyn Kennedy has worked at senior levels in both the public and not-for-profit sector working across social and affordable housing, homelessness, Aboriginal housing, disability and health.

Robyn is a proud 78er with a long history of involvement in LGBTQI activism commencing in 1975 when she joined the Executive Committee of CAMP New South Wales. She was an active member of the Gay Task Force and is currently the Secretary and Treasurer of First Mardis Gras, a community not for profit association for’ 78ers. Robyn was elected to the Board of Sydney Gay and Lesbian Mardi Gras in September 2017.

I was born in 1953, eight years after the end of World War II. I was born into a conservative Catholic family living in the inner west suburb of Ashfield. My uncle was a Bishop and my cousin was a priest – that’s how Catholic we were. In those days Ashfield was not the vibrant, multicultural mix it is today, with multiple Asian grocery shops selling exotic spices, sauces and vegetables.  The most exciting thing you could do in Ashfield then was have a spoonful of malt in your milkshake. Ashfield was also very white – not a “new Australian” as migrants were called – to be seen, apart from the Italian family that ran the fruit and veg shop.  Ashfield was all nuclear families, not that “nuclear” was a term commonly used in this context at the time, given Cold War sensitivities.

Traditional family structures were normal. Everything else was not. So how do you grow a leftist lesbian in this environment? The forces of evil were at play to constrain any flourishing lesbian tendencies. Being brought up Catholic meant I went to an all-girl convent school. The school was run by the misnamed Sisters of Charity.

One of the frequent past-times of the Sisters of Charity was to randomly wack kids on the shin with a ruler, just in case they were even thinking of transgressing in some way. Going to a Catholic school meant I had to be initiated into the sacrament of Communion, as it is known. This involved dressing up girls like miniature brides. And there were more attempts to encourage femininity and compliance. There was the ecological approach: Reinforcing the naturalistic norm of heterosexuality. There was also the multicultural approach: Emphasising traditional concepts of female subservience.  And of course… there were the nuns. I’m not talking about new age nuns with university degrees and sensible skirts. The nuns at my school wore heavy, black serge habits covering everything from head to toe, with only the face and hands flirtatiously exposed.

The nuns seemed to spend an inordinate amount of time prowling around behind bushes in the hope of spotting unladylike behaviour. Of course, it’s difficult to sneak around when everyone can hear you coming a mile away – rosary beads clanging together like the keys of prison officers inspecting cells.  The nuns were obsessively focused on discouraging the development of what was called “particular friendships.”

“Particular-friendships” were relationships between girls considered to be… “unhealthy.”

And for “unhealthy” read “lesbian.” Being a lesbian was the worst of the worst. It could not be reconciled with the narrow roles available to women at that time. The choices for Catholic girls then were housewife or nun. You could have a brief spell as a teacher or nurse, as long as you gave it all up when you got married and subsequently produced at least five children – the inevitable consequence of the Church’s position on birth control. The only form of birth control permitted by the Church was the rhythm method, also known as Russian Roulette. Because the woman had to work out when she was not ovulating in an attempt to avoid pregnancy.  It didn’t really work. I escaped harassment at school about particular-friendships mainly because all the girls I had mad crushes on went to other schools. There was one girl, Nola, who went to another Catholic school. *Sighs happily* Nola.

We spent a huge amount of time together: After school, weekends. I even lent her my favourite LP records including my prized Young Rascals album.  But it wasn’t to be.

Our respective mothers freaked out about our developing relationship and colluded to stop us seeing each other.

“What happened to Nola?” I wonder. “Did she marry and have five kids, or did she become a radical lesbian separatist dedicated to overthrowing the patriarchy?”

Given that I never ran into her at all the dozens of demos I went to over the years, I think the smart money is on the husband and five kids.

What a loss. And I never got my records back either. And of course, particular-friendships were said to be just a misguided phase. According to the Church, you could choose to just walk away from your sinful, alternative lifestyle and become normal. Piece of cake really. Yeah, like any second now I’m going to willingly choose not to pursue gorgeous women and hot lesbian sex, and get myself a man!

A classic, non-sequitur by the Church was, “Love the sinner, hate the sin.” Yes, I know, I never worked that one out either. Wonder if this means it’s OK to have sex via an avatar.  Catholicism specialises in guilt. You are supposed to feel guilt for just about everything, but especially deviancy.  The only solution was to repent your evil ways and come back into the fold. I didn’t. I finally escaped the Sisters of Misanthropy and commenced studying Law at Sydney University in 1972. “Now I’ll get to meet some lesbians without having blossoming relationships sabotaged by freaked out mothers,” or so I foolishly thought. There were no lesbians at the Law School. Not one. Hardly any women, let alone lesbians.  No, the Law School was full of excruciatingly dull, privileged white men oozing with the Malcolm Turnbull born-to-rule persona.

Unfortunately, I couldn’t escape the privileged white men because the Sydney University law school was not on the main campus. It was in a concrete building next to the Law Courts in the city, where more privileged white men flounced around in wigs and gowns; all a bit Mardi Gras really. So, my next cunning move to find lesbians was to change universities! I transferred to the University of New South Wales and took up Philosophy and Drama. “This time for sure!” I thought. But do you think I could hunt down any gay or lesbian groups on campus?

AUDIENCE MEMBER: Not one!

ROBYN: Not one. Surely, they must have been there, but I couldn’t find any. I hadn’t then had enough exposure to develop my gaydar. It was 1975, three years after leaving school that I finally managed to find lesbians to hang out with and to practice being a lesbian with. A lot of practice.

How this happened was that I stumbled upon a gay and lesbian organisation called CAMP – the Campaign Against Moral Persecution. At that time, gay and lesbian organisations were very few and tended to fly under the radar due to legalised oppression and discrimination. And even when these organisations did try and publicise something, they faced obstructions. CAMP could not get Telstra to list its phone counselling service in the White Pages because the listing included the word “homosexual,” which the powers that be decided was offensive.

ROBYN: Having found CAMP, I threw myself into their political action group and Management Committee, spending many years working for LGBTIQ equality.  Demos were what we did then. I was still at high school when I went to my first demos for International Women’s Day, and Aboriginal land rights, and against the war in Vietnam. Demos were the internet of the time. They were the means of spreading ideas, of expressing opposition or promoting civil rights. In the absence of the internet, social media, texts, and other forms of electronic communication, we organised demos and spread the word that the demo was on through posters and phone trees. So, there we’d be, driving around in the middle of the night, jumping out of cars, and pasting posters on walls with home-made glue.

We also established phone trees. I don’t mean a sales stand with mobile phones. A phone tree was where one household would ring ten other households and each of the ten would ring another ten, and so on; landlines, of course. It was relatively fast and effective and provided an opportunity to talk tactics. Another popular talk mechanism of the time was consciousness-raising groups. This was where a bunch of women would sit around in a circle on the floor discussing feminism, lesbianism, the pros and cons of separatism. Nobody chaired these discussions, so they tended to go for hours and decisions had to be made by consensus. That being the case, few decisions were ever made.

But it was all good fun and I had finally met lots of lesbians. So, back to the original scenario. Post-war arch conservatism, a family that was more Catholic than the Pope, malted milkshakes as the highlight of my existence, and the ever-vigilant Sisters of Malevolence and their holy mission to stamp out “particular friendships.” But none of these negative influences prevailed. Why? Fucked if I know. But it doesn’t really matter because, in the end, I got to pursue as many particular-friendships as I liked.

And believe me, I did.