A collection of tales from Ro’s journey to becoming the Victorian Commissioner for Gender and Sexuality. 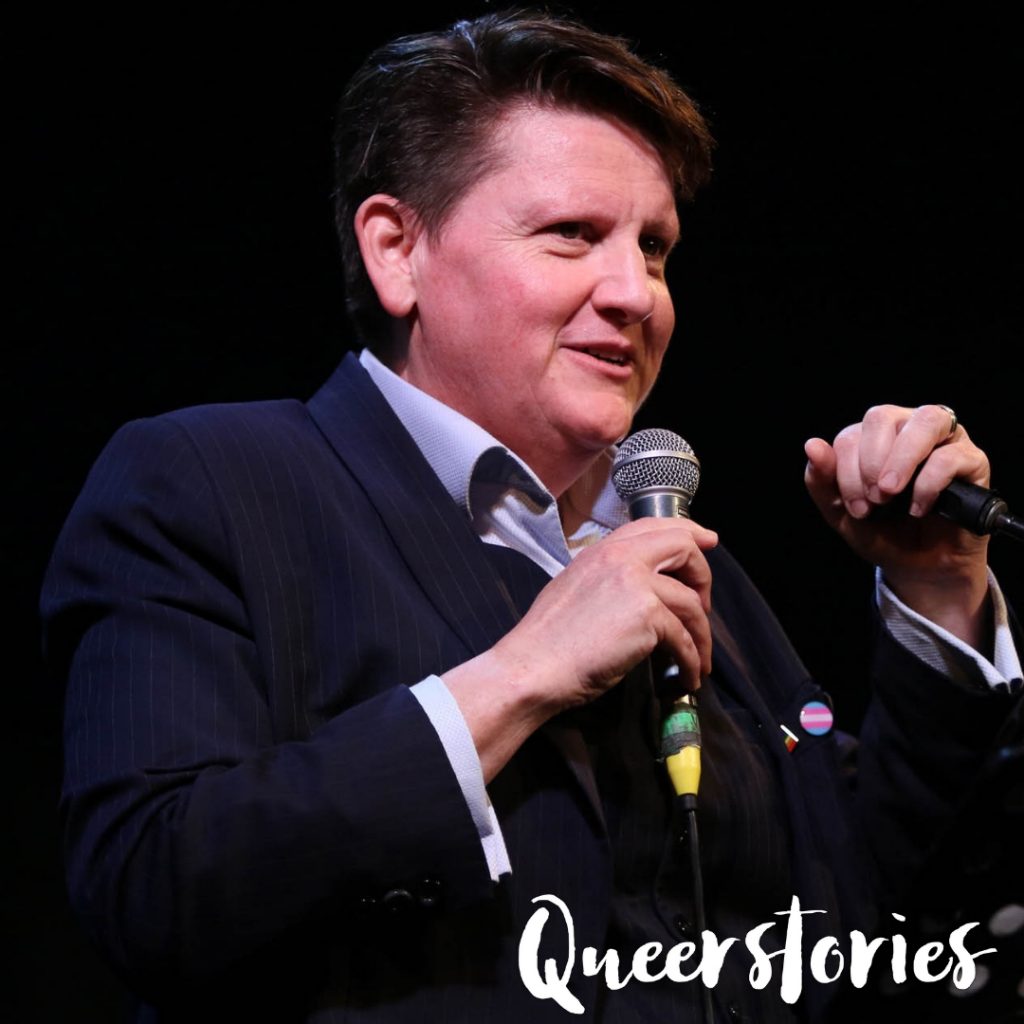 Maeve tells me that you want to hear about me, and this is a personal story and not a Commissioner story, but she’s a bit of a control freak, do you know? She wanted the whole…

Yeah, that’s her laughing. She wanted the whole script, and I said, “I don’t write it out,” so she’s a bit panicked about what I’m going to say back there. I just think it’s quite interesting. I’ve got a little bit of a Facebook following, and when I do a lovely government post, you know, there’s a little bit of action there, but when I do something on my ride-on mower, it just goes ballistic!

People just want to know that little bit about you. You know, when you become just like – a little ‘c’ – commissioner-famous, people just want to know. And I worked it out. I think it’s because I represent you, so you want to know who I am, so here I go. My name is Ro Allen. I’m gender diverse, non-binary, AFAB, trans masc, butch, monosexual. Nice to meet you. It’s not how I do every introduction, but there you go.

So, where did it start? You know, Maeve also said, “What’s the name of your presentation?” I thought, “Oh, God. I haven’t thought of anything.” My EA is saying, “You have to give her a name. You have to give her a name.” So, I said, “All right, Accidental Commissioner.” That was the name. I thought, nothing in my life has actually been an accident. It actually has all lead to this space, but it started in Shepparton. When I first went to Shepparton I was on this thing called WIN Television. Still got WIN Television. I was a new youth worker in town, and this is like 25 years ago; I’m 45 now… 46, 45. Something like that.

Anyway, the next day, I was on television. After that, these ten… No exaggeration… Ten queer kids came to see me and said, “Thank God you’re here. Can you start a group?” So that started, really, advocacy for me, and I wasn’t much older than them. I think I was about 19 or 20, myself. That was really quite difficult at that time. I was physically assaulted, and I had lemons thrown on my roof, and my car graffitied.

Interestingly, I was on the ABC Radio just last week because a very similar incident happened to a lesbian couple in rural Victoria, so that’s 20 years on. I think a lot has happened, clearly has happened. If you told the 20-year-old me that was running that group, that was being assaulted, that was being told to get out of town in Shepparton, that I was going to grow up and be Victoria’s first commissioner for gender and sexuality, I would’ve said you were absolutely nuts… absolutely nuts, but here I am. That was Shepparton.

I started that group, and then from there, I realised, if it’s happening in Shepparton for kids, this isolation, it’s happening all over Victoria. I went to Melbourne and worked with Youth Affairs Council Victoria. I became the Chair. I like to take over by stealth; go and then just work your way up. I said, “Right. Now I’m the Chair, let’s have a statewide LGBTI support network,” and we did that. That’s been funded now for 20 years, and there’s a couple of million dollars that both sides of government have put into that.

We started a Ministered Advisory Committee. Back then, it was just gay and lesbian. I remember we met for the very first night, and we met and we were in the basement of the Department of Human Services. We were attached to a part of the Department that was called Food & Hygiene, and we thought we were Christmas.

You know? We thought we were Christmas. We were in there! This is great! We didn’t get a lot done.

They didn’t really listen to us. It evolved. In the next one, we got up to the first floor and we were called… They changed their name, I think. The alphabet keeps just getting longer and longer, and then we’re the LGBTIQ Health and Wellbeing, and then in this government, of course, they announced a commissioner and a full task force.

I was going up and down to Shepparton a lot and decided that when I did fall pregnant that I wanted to have my baby in Shepparton. I was the Chair of the Ministered Advisory Committee of Gay and Lesbian Health there, and I thought, no way would I be discriminated against. “This will be just a breeze.” I think we were the first rainbow family that Shepparton Hospital had ever seen. I still remember thinking, “Oh, my goodness.”

It’s certainly come a long way, not far enough. There’s certainly a market for butch maternity wear. There wasn’t a lot out there 11 years ago when I was certainly the only pregnant person on a tram that nobody stood up for because they thought I was a guy with a beer gut.

I just thought, “Oh, come on, people! Somebody stand up!” You know? Gender diversity is just the funniest thing, isn’t it? It is truly funny. I had two taxi rides yesterday, both presumed to be male by the two taxi drivers, and, jeez, it’s funny what men say to each other. Really, it’s something else. And then, that’s 40 minutes from the city to Bungaree. You think, you know, “What happens if he finds out that I’m gender diverse? Okay, let’s just go with it.” You know when it gets too far to explain?

And bathrooms. You could do a whole set on bathrooms, couldn’t you? So we won’t go there. Sometimes, they call me the Commissioner for Toilets.

I did do this one gig for… Let’s just say it’s a multinational company. Anyway, I was racing to go, racing, and there’s about 700, so a little bit larger than this; not much larger but a little bit larger. I needed to find a bathroom, could not find an all-gender all-ability bathroom for love nor money, could not find one anywhere, and went, “Oh, make a choice. Make a choice.” Went to the women’s bathroom. Sure enough, have an incident with a woman at the basin who says, “Sorry, sir. You’re in the wrong bathroom.” Two minutes, maybe three minutes later I get introduced to her as the CEO who is about to introduce me on stage.

But, you know, on a personal note, sometimes you just don’t want to be queer as the Commissioner. Everything that you do every day, you know, you have to be the Commissioner. I think it’s a bit tricky. We like to sometimes go where nobody knows who I am. We went to America for a family wedding. My partner, Kay, said, “Oh, this is going to be great. We can just be ourselves. No one’s going to know who you are.” Sure enough, in Starbucks, someone comes up and goes, “Oh, didn’t I see you on Backroads?” Couldn’t believe it. You can’t actually go anywhere. But, I absolutely love it. It’s the best thing. It’s the best thing.

I’ve been really fortunate to work really closely with Aboriginal community and Aboriginal governance, and understand the ways of First Nations people. I’ve also been really privileged to represent the International Church Network, or the National Council of Churches overseas, and do a lot of interfaith work. That’s certainly put me in good stead for the work I’m doing around bringing churches with us.  A lot of people say, “Why are you bothering?” But there are a lot of LGBTI people of faith. That’s how I met my partner, in the church, we both worked for the Uniting Church. It’s an important part of it as well.

There is a huge line-up behind me, and I’m very aware of that, so I wanted to just sort of round it up and say, yeah, from Shepparton to Melbourne, we live in Violet Town. Our daughter now is 11. She’s right out there. She’s fantastic and very much part of the work that we do. Being Commissioner has changed a lot of things. The whole family signs up to be Commissioner, I think. I do want to acknowledge Kay and Alex. They are somewhere. I don’t know where they are. I can’t see a thing. But it is a whole family job, and I really absolutely love it.

I’m going to continue to do this work. I’m going to hopefully be as open and accessible and personal as I can. A lot of people want to know my personal opinion on everything. The other day, the intersex community said, “Can you tell us exactly your belief on surgeries for intersex kids?” And, as Commissioner, sometimes you just cannot give your personal view anymore. You do give up some things by being Commissioner, because anything, any personal opinion of mine can now be seen as government policy, and I can get in a lot of trouble for it. So, it’s a very fine line that I work about how much personal you can bring, and how much government line you have to tow.

I think the first thing that I got rid of was alcohol. I don’t drink anymore. I used to just go, “Right, I won’t drink when I’m working,” and I’m always working. Even the other day I went to [inaudible 00:10:07] and I went and saw Blue House. I love Blue House. I’ve never seen Blue House sober before, but I did. I went, and I was actually by myself. My mates didn’t turn up for 45 minutes. They left me there. It was just a really interesting different experience for me to go there because I was fair game. If anyone recognized me, they’d say, “Commissioner’s standing on their own. Let’s go and talk to them about safe schools, or this policy or that policy, or whatever else.” It was just really… It’s a fantastic thing. It’s a balancing act but I absolutely love it.

Every day, I wake up and I think the sacrifices are absolutely worth it, and I am being enriched by being your Commissioner every day. Thank you so much.