Via possums, renos and Bridget Jones’ Baby, Rick outlines his these for why his mother, Deb Morton, is a queer icon. Rick performed this piece at Sydney Writer’s Festival and Adelaide Writer’s Week.

Rick Morton is an award-winning journalist with The Australian and is the author of One Hundred Years of Dirt. It explores intergenerational trauma, poverty, addiction and mental health and the role of a mother who tried to love enough for the failures of everyone else around her. Originally from Queensland, Rick has worked in Sydney, Hobart, Melbourne and Canberra where he was the social affairs writer for The Australian. Rick is the winner of the 2017 Kennedy Award for Outstanding Columnist. One Hundred Years of Dirt was longlisted for the 2018 Walkley Book of the Year and was Highly Commended in the Victorian Premier’s Literary Awards 2019. 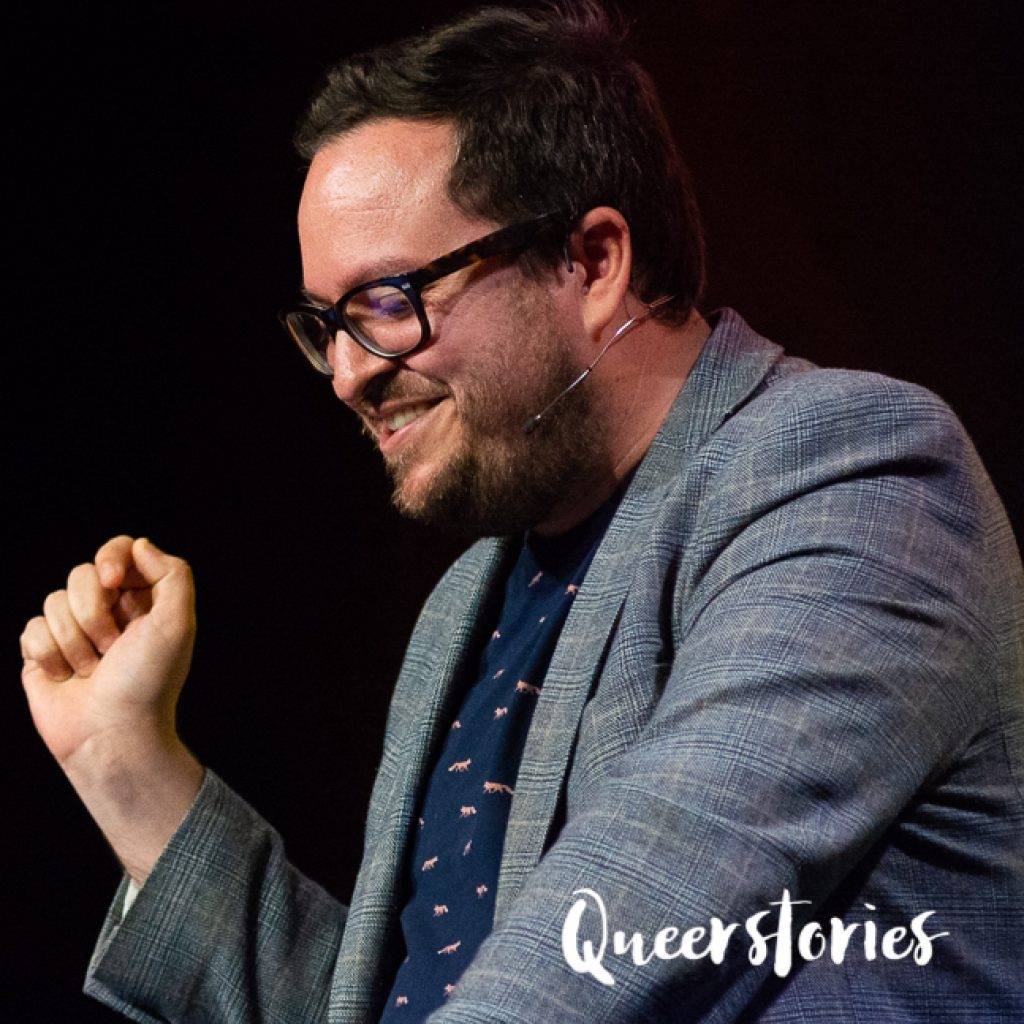 Rick Morton is an award-winning journalist with The Australian and is the author of One Hundred Years of Dirt. Rick is the winner of the 2017 Kennedy Award for Outstanding Columnist. One Hundred Years of Dirt was longlisted for the 2018 Walkley Book of the Year and was Highly Commended in the Victorian Premier’s Literary Awards 2019.  This story was first performed at Adelaide Writers Week, then at Queerstories for Sydney Writers Festival in May 2019.

Noah Webster was a lexicographer working on the great American dictionary in 1806 when his wife came into the study and found him with the secretary on his lap. She said to him, “Noah, I am surprised.” And the great lexicographer replied, “No my dear, you are astonished. It is we who are surprised.”

My Mum slut-shamed a possum the other day.

And I was thinking of this little exchange when I asked her about the precision of the language that she had used. “Surely,” I offered, “your beef is with the fertility of the possum and not how many times it has had sex.”

For four years now, Mum has been stuck in a territorial dispute with a family of common brushtail possums that have moved into her roof and, in so doing, consumed her life to Seinfeldian proportions.  In my thesis tonight, this ongoing skirmish is part of a central proof that my mother Deb Morton is a Queer Icon. I was on painkillers when I wrote that line too.

In addition to pushing back against the forces of Barry Humphries, there is a solid logic here. You see, possums are like straight people. They look fine and harmless from a distance but if they ever get into your home, they refuse to leave and their children will become your problem.

*Rick laughs at himself* What am I doing?

Like possums, it is illegal to kill a heterosexual. The only way to deal with either is to trap and relocate them, usually with the promise of a mining job in the Pilbara.

Deb Morton is a queer icon. She loves a good renovation, especially if it keeps out a possum, but there is one thing she loves more: A reality television show about renovations. Once, during a phone call, I was in the middle of telling mum about the latest structural personal failing of mine when she yelled without any warning, “Sticks and Wombat just won the family holiday!”

The Channel Nine reality show The Block is like cocaine for my mum. She doesn’t drink, smoke or gamble but she will absolutely go on a five-day Block bender and show up at your house, dehydrated, in a dressing gown with a Makita power drill.

Proofs three and four: Mum loves craft and has way too much experience dealing with the police despite never having done anything wrong. My brother battled ice addiction for several years, and the first real hint that something was up were the mushrooms he’d drawn on every available surface in psychedelic colours.

He started calling himself Shroomy. My brother told us he wanted to sell his artworks, which was great news for any interior designers who’d ever considered the wares at a weekend market and thought: “No, not shit enough.”

Over the summer of 2016, Mum set about her usual festive handiwork, stitching reindeer to send to her children as Christmas decorations. At the same time, she discovered my brother Toby was working on a little craft project of his own, blowing glass ice pipes around a drum underneath her house. It reminded me of some of the more diverse episodes of Better Homes and Gardens, where the gardener builds an outdoor planter box while Noni Hazelhurst sets up a safe injecting room.

Mum was both furious and what I would describe as angry-proud. “Now how the hell did he learn glassblowing, Rick? That’s what I want to know,” she said to me down the phone. There was a pause before she added resolutely, “It’s a skill!”

Proofs five and six: Deb Morton is a feminist trailblazer and sassy as hell. When she married my dad, he refused to let her keep her maiden name. Faced with this obstacle, Mum did what any self-respecting woman would do and laid low for 11 years like an extremely drowsy sleeper cell before executing the greatest coup of all when dad asked for a divorce: She refused to give the name back.

She is still Mrs Morton to this day. And she raised a feminist daughter. My sister Lauryn is a kind, funny, and extremely talented midwife. During the week, she delivers new life into this world. And on weekends, she hunts wild pigs and takes them out of it.

You know that look on a dog’s face when it farts itself awake? That’s the look men get when they realise they have scorned my sister.

It’s amazing. In so many ways, strong women are core business for our community.

Proofs seven and eight: Deb Morton adores a costume and is extremely curious.

Mum, a teacher’s aide at a primary school, has gone to school for Book Week dressed up as a member of ABBA, one of the Incredibles, an elf, a reindeer, another elf, and, inexplicably, an elephant with a papier-mâché head so large and bulbous, three poachers in Africa got an erection.

She taught me curiosity from the earliest age. Wonder, awe, that sense of the sublime we can all find in nature among the plants and animals. Granted, curiosity also gave us gender reveal parties and the first dick in a watermelon, but we should embrace the new frontiers that bring us joy, and move on swiftly from those that conjure despair.

Proof number nine: Deb Morton is a film connoisseur. And nothing, I repeat nothing, will get in the way of a viewing of Bridget Jones’ Baby. I was home writing my book in July 2017, and mum and I were enjoying the third instalment of the noted classic when my brother’s friend Scottie was stabbed in the neck under the house with the severed end of a broken golf club.

We hit pause on the DVD. Scott was lying on the ground, a pool of blood pouring from the stab wound in his neck. I was on the phone to the ambulance, Mum to the police, and my brother had gone over to the fence to assure some passers-by that everything was absolutely okay, which of course it wasn’t. Scottie survived, albeit with some nerve damage to his face, but our house became a crime scene until early the next morning.

The local police sergeant turned up. “Oh, g’day, Rick, I haven’t seen you in years,” he said cheerfully through the screen door. He asked me to take him in detail through everything that happened.

“Well, Mum and I were upstairs watching Bridget Jones’ Baby,” I told him.

And he said, “So, watching a movie upstairs?”

“Yeah, we’re probably not going to need that level of detail.”

Oh, so we’re just going to give up on Renee Zellweger’s happiness now? Is that how this night is going to go?

When the law boys left at 1 A.M., I turned to mum and asked: “Do you just want to just finish the movie?” She said, “Of course, darling.”

The final proof for my thesis is the most important. It’s love. When all else failed around her, Deb Morton loved and loved and loved. Through poverty and turmoil, pain and suffering, she loved. When others may have turned to bitterness or anger, she found her joy in the most significant of human victories.

Mum is very short and, as such, has a very low centre of gravity but – like a Shetland pony with a long-term domestic partner – it was love that kept her upright in this world.

And in our community, when so many tried to take so much from us, we found love and we used it not just to survive but to thrive. So why is my mum a queer icon? Because she loved me, her gay son. And it was enough. Thank you.