Rhys Nicholson tells tales from his youth in Newcastle.

Rhys has performed all over the world, garnering audience and critical praise for being both funny and a snappy dresser. In 2016, he was nominated for best show at the Melbourne International Comedy Festival. Zoe Coombs Marr won and in the meantime Zoe and Rhys wed at the Festival Club with their very gay partners acting as Best Man and Maid of Honour. 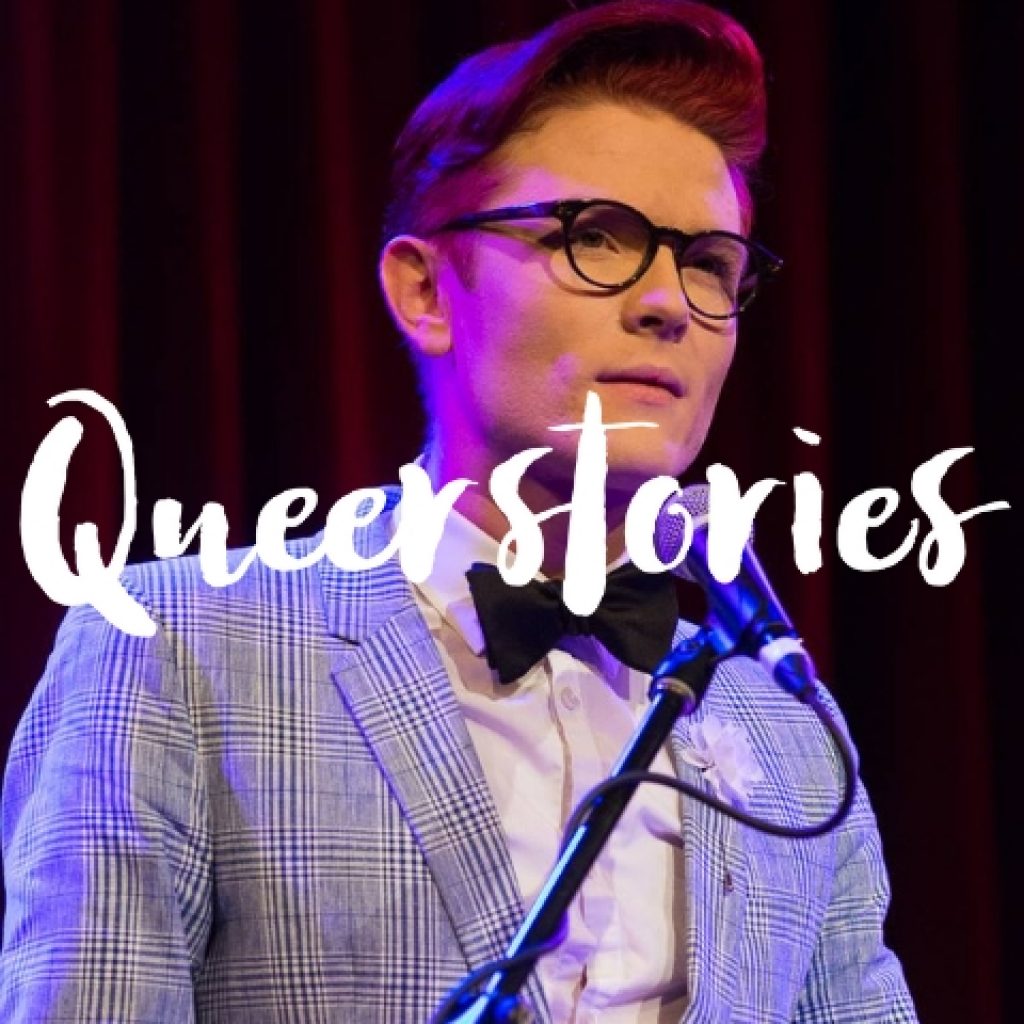 Hi I’m Maeve Marsden and you’re listening to Queerstories – the podcast for the monthly LGBTQI storytelling night I run at Giant Dwarf in Redfern with support from the City of Sydney. This week – comedian Rhys Nicholson.

Yay Maeve Marsden. Hello! Alright, I never know what to do at these shows. I never feel like I’m smart enough. I’m not a writer. I’m a stand up comedian. We don’t deal in deft metaphors or clever concepts, we use a lot of overly complicated similes to make you feel like we’re smart. But really, just like using an AK-47 to shoot dead fish in the worlds tiniest barrel – it’s easier. Basically, what a comedian does is reference something you’ve heard before, you as the audience go ‘oh yeah I’ve heard that before’ and you laugh and clap and I get paid. *one audience member claps* Thankyou, a little bit patronising.  So tonight I’m going to try and be smart. So here is a story about the time I blew a guy on a public tennis court. You gotta write what you know.

Let me take you back ladies and gentlemen, to the year 2009. Rebecca Gibney had ust won the Gold Logie, McLeod’s Daughters was still a thing and we were yet to feel the shame slap from Harry Connick Jr following the Hey hey it’s Saturday Jackson Jive Blackface fiasco. It was simpler times.

I was almost 19, living in my hometown of Newcastle, my heart full of big city dreams and my lungs full of industrial smog following the leftover collapse of the steel works. It was like footloose, but somehow gayer. I had also recently lost a lot of weight due to a virgining eating disorder, more on that later, uncomfortable – if you’re not on board with that it’s going to get real shit real quick. From losing a bunch of weight I had in turn discovered sex. Even though I’d lost my virginity almost two years earlier, well I’m still technically still a virgin in the lord’s eyes, just like a lot of people in this room, there really hadn’t been much movement at the station for those couple years. In high school I was overweight, had naturally red hair and tremendously bad acne. I was a triple non threat. As my high school bully Tom Holloway put it, “No one wants to fuck a pizza”…His real name is Bryce McCarter and he works at Nick Scali now. I won. Did I?

But now that I was older things were different. I was different. I had lost weight, my skin cleared and no longer was I this large greasy pizza no one wanted to have sex with, suddenly I was a medium greasy pizza some people wanted to kiss…in secret. I lost more weight, and more weight and suddenly I became quite popular. In a particular way if you catch my drift. I was friendly. Basically I was a slut, a proud slut. Maybe she’s born with it, maybe it’s low self esteem.

So one night I finished my shift at grill’d (remember the burger craze), changed, bought a 6 pack of smirnoff double blacks and headed to a party. I was about 17. It was one of those parties that was had at that age because the parents were away. The kind of party a bunch of people turned up, broke something and left.

I arrived at the party and almost instantly made eye contact with a guy across the room. The kind of “hey you’re the other gay at this party” type of eye contact. I call it the gay nod. I still do it to this day, any other gay men in the room know what I mean. You see another one in an elevator and you kind of go ‘hmm’. It’s like we served somewhere together, the Great War of General Pants Co.

So I said to this guy, I can’t remember what his name was, Christopher, yeah we’ll call him Christopher. Christopher was very handsome. Like way out of my league but within a split second of talking to him it was clear not only was he handsome, he was also a fucking idiot. Never said I played a fair game.

Having both finished the drinks we’d brought, we decided we should go for a walk, which is 17 year old slut code for ‘let’s go dry hump on some state property’. But both of us had run out of alcohol, so ever the Macgyver I stole a box of Fruity Lexia and we were on our way.

The night was warm, but the goon she was warmer. We walked and silently passed the sack between us. After a while we came to a bus shelter and the ambience just took us. I was smoking a menthol cigarette trying to look like Marlene Dietrich but I think it came of more like I had some sort of  head injury. Christopher looked across the streets and said “Oh we should go in there”. I knew that place, that was broadmeadow outdoor tennis courts. We used to go there for school sport. We climb the fence and crawl through some bushed like some sort of boner tough mudder at this point.

Now, let me say this. I am not, and have never been, sexually adventurous. Even then, this was very out of my character. Most of my actions as a teen were to keep up a facade of this crazy guy.If I’m honest, I guess I’m embarrassed about sex a lot of the time. Like here’s an example. There was radio chatter in my relationship recently about maybe like, getting an item involved. Like a new buzzy… a sex toy. Which I was against getting a sex toy at first, mainly because I just felt like by buying a sex toy we are taking away a job from a local, home grown, hard working Australian dick. I’m patriotic where it counts.  Also, if you own a sex toy are you not just constantly thinking about it. I’d always be thinking about it. Someone’s going to find it, someone’s going to find it, they’re going to know I’m having sex! They’re going to know I’m having weird sex. They’re going to know. It’s in the sock drawer. I’d be out and about running my errands, I’d be hit by a bus and my last words would be “MY DILDOS”.

So I’m making out with this stranger on a tennis court in Newcastle. We’re standing up in this hut thing. I decide I’m bored, unbuckle his jeans and…go downstairs. Because I was raised to be nice to new friends. And I’m down there, and everything’s going great. But then out of nowhere, it’s not. The mixture of the double blacks, and the goon and the movement. I gag a little bit. Which was uncommon for me at this point in my life, usually you could open an umbrella in there. So I continue. It’s fine. I gag again. It’s fine. I commit to it. I’m fine. Then like some sort of dickarus, I fly too close to the sun…and I just started hurling. Like proper, a Niagra falls of fermented fruit and shame pour out of me. He gasped, how do I explain it, like this visceral, like imagine you’re getting a blow job and someone vomits on your dick. That’s the only… kind of like “whhhhhyyyyy”, like warcrimes kind of bullshit like we’re going to The Hague for this.

It was pretty quiet for a bit. But in my family we either commit to something or we run away. So I ran away! Of course I ran away. A couple of you are like ‘oh I think he got back in there, oh well natures lubricant’.

I caught up with a school friend not long ago. We were reminiscing about high school sport and in particular how bad we were at tennis. My friend Annie who I hadn’t seen in a few years she said “Ugh, on that court, God we sucked” If only she knew.