Rebecca Shaw: The Sky Is Gay

Originally performed at Nailed It (another excellent Giant Dwarf event), Rebecca Shaw’s thesis that the sky is gay is watertight, and bloody hilarious.

Rebecca Shaw AKA brocklesnitch, is a writer and creator of the parody Twitter account @notofeminism, which was developed into an illustrated book with Affirm Press. She was on the writing team at Tonightly, and has written for Junkee, The Guardian, Daily Life, Kill Your Darlings and heaps of other outlets. 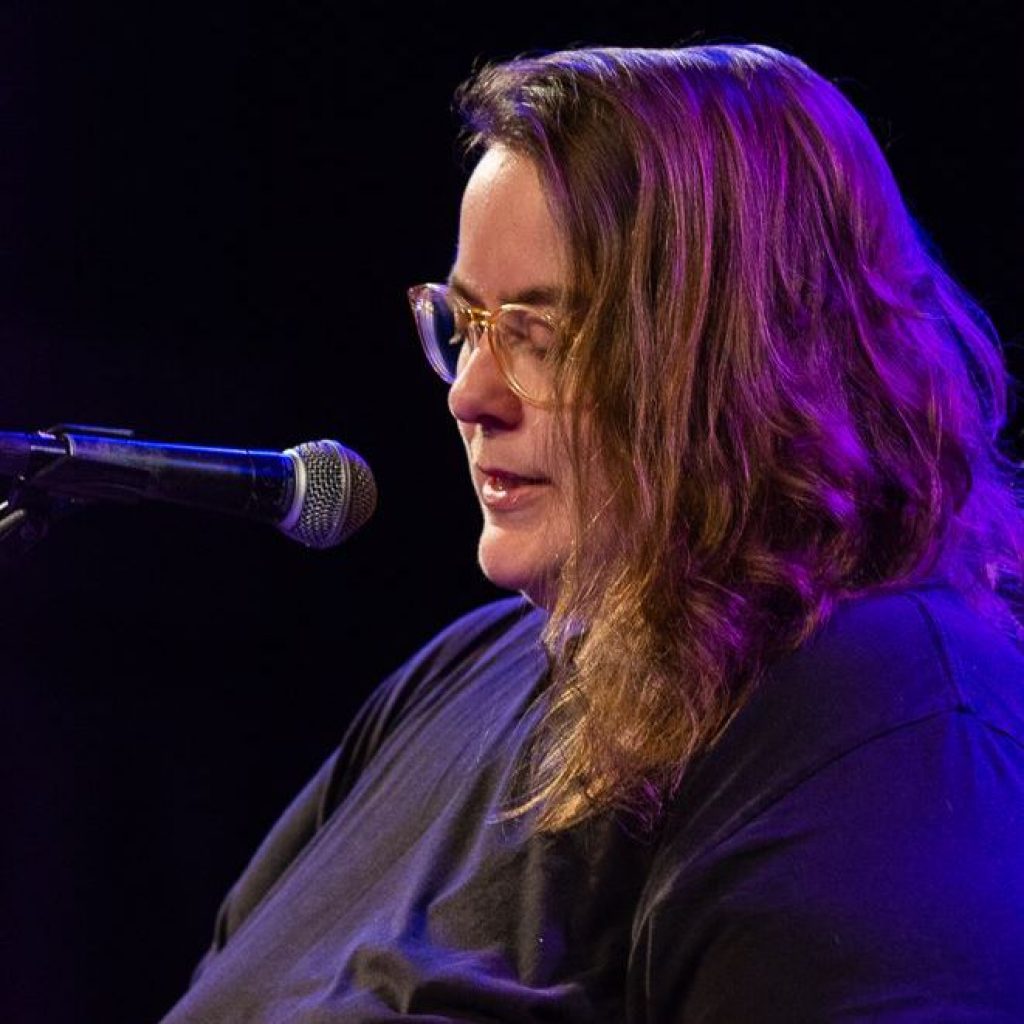 Rebecca Shaw, otherwise known as Brocklesnitch, probably doesn’t need an introduction. It could be argued that she’s Australia’s favourite lesbian. Like, stand aside, Magda. She’s a writer and creator of the parody Twitter account @notofeminism, which was developed into an illustrated book with Affirm Press. She recently won an Aria Award for Best Comedy Release for a song she co-wrote while working on the TV show Tonightly. She’s also managed to be my housemate for nearly a year, which is probably her most greatest achievement, and she’s featured in the Queerstories book. Rebecca Shaw.

G’day. Sorry for how dumb this is. Just getting it out there.

At the end of 1994’s iconic action movie Speed, Sandra Bullock is lying on top of Keanu Reeves after the subway that they were on crashed through a wall onto a street or some shit like that. In that moment, having survived together, they realise that they have fallen for each other. Keanu says, “I have to warn you, I’ve heard relationships based on intense experiences never work.” Sandra Bullock replies, “Okay. We’ll have to base it on sex then.” Great movie.

This time last year, we were smack-bang in the middle of the postal vote survey on marriage equality. It was an intense experience for me and for many people. A lot of what we were put through was terrible, but the main feeling that I have about that intense period is developing an overwhelming sense of love for our community. Before that experience, I adored our community. During that experience, I fell deeply in love with us.

But, let’s not get ahead of ourselves. The fight didn’t end on the day that almost 40% of people voted not to legalise equality. It didn’t end on the day that the legislation was passed, especially for the more marginalised people in our community. And even the most gaystream of us should be ready for more fighting now, as our new Prime Minister Scott Morrison has made clear his opinion of us since taking office. We must stay vigilant, and that’s why I’m here to remind you of one of the worst days of the postal survey.

It was a beautiful, sunny Sydney Sunday, some would say, “Simply Splendid.” I’m so sorry.

Friends and I were sitting outside of an Inner West cafe we’d waited twenty minutes to get into, eating our vegetarian breakfast, and discussing things like, “If we had the chance, would we fuck clones of ourselves?” Just a regular Sunday conversation.

All of a sudden, in between sips of my freshly squeezed orange juice, I noticed a plane begin to write something in the sky. I ignored it for a few minutes because I assumed it was going to be some sort of what we call “Heterosexual Nonsense.” And it did indeed end up being heterosexual nonsense, but not the kind that I assumed, which was a marriage proposal from a man who would point to this for the rest of his life as the one example of a nice thing that he’s done for his sad wife.

No, it was another type of heterosexual nonsense. A worse type, even worse than hen’s nights.

A group of people had raised money to have a plane write “Vote No” in the sky, which is obviously what Jesus Would Do.

You probably don’t need me to tell you that the marriage equality debate was terrible, debasing and exhausting. Not being able to simply go out and enjoy breakfast with some queers while talking about clone fucking, without having a Flying Homophobe put a dampener on the day was annoying, to say the least.

But the most offensive part of the skywriting, to me, and the part that sickened me to my stomach, was not simply the homophobia on display, but the form that it took. Not just because sullying the bright blue sky with your hatred, so it is inescapable, is a huge dick move. No, it was truly offensive because of another important reason, a reason that still infuriates me when I think about it to his day. And that reason is that The Sky is Gay.

Thanks. That’s right. How dare this person go into the sky, which is gay, and leave a homophobic message when the sky is so obviously gay? It is depraved. If you are sitting there thinking, “Wow, I don’t agree with this hilarious stranger on stage before me, I do not think the sky is gay,” well, let me give you a few reasons why you are stupid.

First of all, and most obviously, is the rainbow. Do I even need to continue? The rainbow is ours. We won it, fair and square in the 1945 war of Leprechauns versus Homosexuals. They’re small.

It was a bloody and brutal battle, fought over many months, but we won. And now we fly the rainbow proudly as a symbol of our strength and our beauty. It has become synonymous with LGBTQI people. Each and every time that God puts a rainbow in the sky, he is doing his own skywriting, and that message is “This sky is extremely gay.”

Then, there are the stars.

Norwegian writer Bjørnstjerne Bjørnson once wrote, “Do not complain beneath the stars about the lack of bright spots in your life.” Wow. What-

That wasn’t even a joke!

What better way to describe our people than describing us as bright spots in the world? Imagine a world without us. Sometimes I do it to scare myself. It’s an apocalypse landscape, filled with heterosexuals holding gender reveal parties, and debating whether men and women can be friends.

Stephenie Meyer, author of the classic literature novel Twilight, once wrote, “I like the night. Without the dark, we’d never see the stars.” This also could not be truer of our people, either. We thrive at nighttime. We are the nightlife. Drag queens never go on stage before 11 PM. If you go out to the country, away from the bright city lights, the blanket of stars looks exactly like the shimmering glitter slathered on the bare pectoral muscle of a gay man at Mardi Gras.

Need more proof than all of this? Sky diving is incredibly gay, as it obviously refers to a woman going down on her girlfriend from Byron Bay named Sky.

And what about Zeus, the Greek God of the Sky? Have you seen Zeus? He has a huge beard, bulging muscles, he is half-naked all the time, and he clutches a lightning rod. Sorry, but Zeus is a daddy.

Speaking of daddies, the origin story of Zeus is incredibly gay. According to the legend, Zeus was born to the gods Cronus and Rhea. They had five children, but because he was trying to avoid the same fate that befell his father, Cronus ate all of his children as they were born so they could not overthrow him. That was until Zeus came along. There was something different about him.

When Zeus was born, his mother wanted to save him, so she took him into a cave and hid him in there. He was the original closet case.

Then at some point, his mother handed him over to his male guardian, and the guardian and his friends all danced and stamped and clashed their shields to cover the baby’s crying. This is the gayest story ever told, and it is the story of the sky.

If you don’t want to take my word for it, I leave you with this point. It’s a point that has been made many times over the years but it does not come from our community or from our allies. It comes from the very people who hate us, so you know it must be true.

Last year, when talking about the Hurricane Harvey, which devastated America, Minister Kevin Swanson said that Houston had sinned by having a, “Very, very aggressively pro-homosexual mayor.” Christian radio host Rick Wiles linked progressive attitudes to Harvey, saying, “Here’s a city that has boasted of its LGBT devotion. They’re underwater.” Just yesterday, Junkee reported that people in Darlinghurst had received letters addressed from “Jesus” that said:

Do you know why I have condemned your state to drought? You chose the curse last year when your nation collectively decided to vote “YES” to that which I abhor. The recent hail storm was your warning to turn from wickedness. Plead with your government, reverse your shameful marriage laws, or I’ll bring hail in a violent form of destruction and death, and delight, to break your pride.

Belov’d audience, you know what that means. These people are saying something very important. They are all saying that the LGBTQ community controls the weather. I have never felt more powerful.

And I can confidently say that they agree with me, as you all must now: The Sky Is Gay. Thank you.