When nothing is black and white, but actually a whole lot of grey and the world is turned upside down from one sentence. A family secret is revealed, changing everything.

Rachael Oak Butler was born and raised in Albury/Wodonga and has worn many professional hats in her time, such as Professional musician, working in shearing sheds, becoming a black belt in Tae Kwon Do and then an Instructor for a time. She currently works as a personal trainer and teaches self defence to young people in high schools. 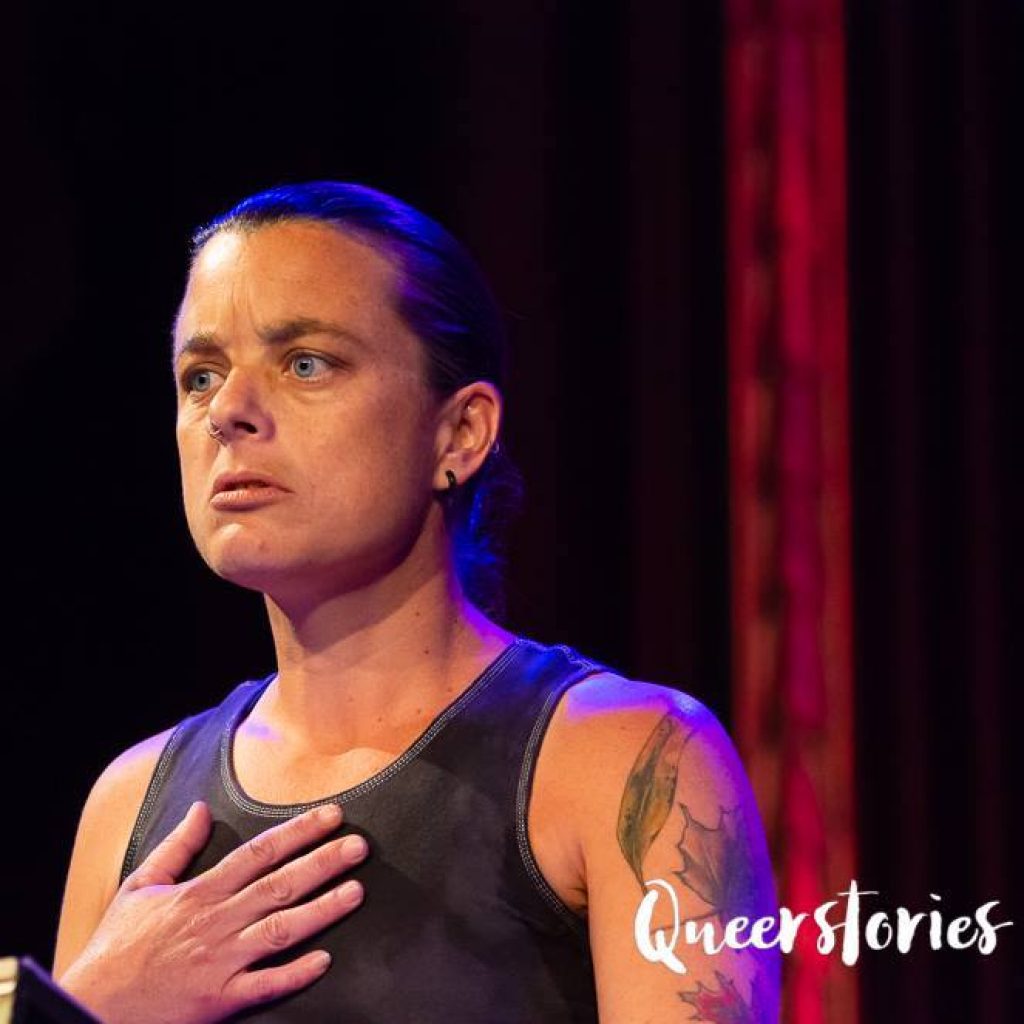 Hi. I’m Maeve Marsden and you’re listening to Queerstories – the podcast for the LGBTQA storytelling night I host and programme. I run Queerstories regularly in Sydney, Brisbane and Melbourne, as well as one-off events in other cities and towns. Check out MaeveMarsden.com for dates and details.

Rachael Oak Butler was born and raised in Albury/Wodonga and has worn many professional hats in her time, such as Professional musician, working in shearing sheds, becoming a black belt in Tae Kwon Do, and then an Instructor for a time. She currently works as a personal trainer and teaches self-defence to young people in high schools. Rachael first performed this story in Albury/Wodonga at the first Queerstories there, and it was one of the most incredible Queerstories performances I’ve actually seen over the last couple of years, so I subsequently booked her in Sydney and in Melbourne. And now, here’s her piece on the podcast.

I wanted some kind of sign, but the place was quiet and still. “Nanna Mirii!”

My words reverberated off the rocks and back at me, standing there worried and completely overwhelmed. I was worried about taking too long for Pop, who was too unwell to leave the car and overwhelmed by everything; being on this trip, being in this place.

Some kind of ravine at the end of a bitumen coated footpath built for tourists to come and gawk at – a sacred place where my ancestors had once gathered.  My ancestors…

“Aunty Elsie?” Tears were streaming down my face.

I’d spent most of my adult life hiding from my Grandparents and disconnected from nearly everyone I was related to. It had always been much easier to say I didn’t really have a family; I’d been on my own for so long.

In the last two years my Step-Mum, Biological Mum, and my kind of Adopted Dad had died, solidifying this further. My Brothers and I had long been in pieces. Weeks after finding out my Grandmother had died, here I was finally reconnecting with my Grandfather, lost in a sea of questions, uncomfortable and awkward in my long-sleeved shirt attempting a disguise of well dressed, respectable and normal… and desperate to learn as much as I could from a man who had spent a lifetime hiding a secret. After all this time we had wasted, and all that we had lost.

Mirii is a Gamilaroi word meaning star. It was the only word I knew of my Great-Grandmother’s language, which we had lost when she was stolen. All I could do was to call out to her, speak her language, our language, Gamilaroi. I am Gamilaroi.

My Grandfather’s Mum was stolen at two years old. Enslaved, beaten, raped, and then married off at 14. She lost her family, her culture, her people, and just like her… her firstborn child was stolen.

Pop and I had driven up from my place to his – one thousand Ks away and worlds apart. He’d told me his secret a few days before we left, whilst I was washing the dishes. I will never forget those words.

*Imitates deeper, older voice* “You know we’ve got Aboriginal in us and your Father has an attitude problem.”

He blurted out, attempting a casual tone as if mentioning the weather, but the weather was a storm our family didn’t speak of, and his tone was gripped in 86 years of burden and holding face.

I knew him to be the whitest white man I have ever met. He worked so hard at his whiteness, making him rigid and intolerant of all things. He could be set off at the drop of a hat and off he’d go, declaring his disdain. There were rules and ways of being, and anyone that wasn’t white, Australian, hetero and male would instantly break them. I was fearful of showing up as an adult – tattooed, pierced, gender-bent, hairy-arm-pitted. Just one look at me and anyone would scream “poofter.”

Reconnecting with him though, I’d noticed he’d softened a little. I saw things I hadn’t let myself remember because it would’ve made our distance so much harder. He had a love and wonder for animals, and he loved this land. He had seen more of this country than anyone else I know. He could make and fix anything, rebuild any motor from the ground up, and he had such a quick wit and humour, and the ability to tell great stories with finely tuned detail.

Pop’s revelation, it shook me to my core. I found myself realising the enormity of his secret in new ways – each time it hit me – and just how much my Great-Grandmother’s traumas had formed all of us. I was so confused and angry at him but I had to hide it because I was also shattered for him by what had made him keep the secret: Fear.

It had hardened and shaped him into a man so scared of the repercussions his Aboriginality would have on his life and his family. He was a product of assimilation and education of white society.

We’ve all had our ears filled with the whitewashed propaganda world of Captain Cook, terra nullius, and the Great Explorers conquering this wide brown land… and blah, blah blah… when actually there were wars, thieving of lands, massacres, criminalising and maiming people and their cultures, stealing children, slavery, segregation, genocidal government policies to assimilate and breed out the black, entrenching beliefs, systems and structures, and the continuance of racist policies; some are still held today. It’s impacted so many people for too long and yet so much of it still goes unspoken.

The Great Australian White Wash: It’s created many ears that couldn’t hear anything else.

In some ways, telling people about my Aboriginality had similarities to coming out, in that the very personal can somehow become politicised, objectified, and the subject of other people’s opinions. I’ve always been well-versed at saying- “I’m not just queer but odd,” wielding a wry smile trying to ease someone’s awkward realisation, as they find out that I’m gay. Try and make light of the coming-outness that can happen any time when meeting someone new.

In all my travels, I’ve come across and challenged all the overt and covert “isms” in too many ways to count. I knew how to combat and shake that shit off. Little Dog Syndrome I had, or Little Dyke Syndrome as I like to call it.

But now, I didn’t know how to say anything. It was too much. My Grandfather’s words had changed what I knew to be my foundations, and yet at the same time, made certain things in my life that much clearer.

I reached out, trying to tell people. Some people who knew me well instantly said how much it made sense and wanted to celebrate. But there was also a lot of, “How much of a part are you?” “If it’s your Great-Grandmother, how Aboriginal can you be after 100-odd years or more?” “What percentage are you?” One person decided I was one-sixteenth. I was so defensive; I knew my Great-Grandmother until I was ten. And if they weren’t quantifying my Aboriginality, it was awkward moments of people trying to give me their opinion about Aboriginal people or tell me about their Aboriginal Friend who had nothing do with anything. Or a lot of, “Oh, you can get free stuff now, and those jobs you can’t get when you’re white.” It all left me dumbfounded and exacerbating my despair. What I should have said was, “Yeah, it comes with bundles of free stuff: Ignorance, racism.”

There was a disconnect, an inability to hear or fathom what I was saying, and if there was any understanding, I think it confronted a lot of people with their own ignorance and shame. I too had a lot to learn.

24 hours before heading off with Pop, I walked into an Aboriginal organisation. I was so fearful that people wouldn’t believe me, and ashamed of my need to ask Aboriginal people for help, all whilst coming from a racist family. I was ashamed of being fair-skinned, ashamed of the privilege that can afford you, and I was awkward and kept apologising for myself. And I kept saying, “But I’m white, though,” to which one of the women said, “Well, I say we’ve got all kinds of coffee in my family: Latte, macchiato, long black, short black with a touch of milk.”

Years ago, I dreamt about an old man who came up to me and hugged me. With his whole body embracing mine, he began to sing the sound of a yidaki. The sound came up from the earth and into both of us, and settled my spirit.

And I woke up, desperate to go back into the dream, knowing she was about to tell me her last name. But I couldn’t sleep. I was wide awake with Aunty Elsie’s image and intense call in my mind. I yearned to see the old people like I have since I was a kid. I wanted a sign but those big old rocks just stood there witnessing my tears.

Leaving the ravine behind me and walking back to Pop’s car, I thought of Aunty Elsie and felt the urgency of her call again, and the desperation of four generations needing to go home.

The radio was playing when I got back.

He turned it off in such a huff.

*Imitates Pop’s voice* “You can’t understand the words of any of this so-called music they blast on the wireless these days. It’s all just noise and too much harping on. And that bloody Daryl Whatever-His-Name-Is… I mean, what’s a horse’s Yeah Yeah, anyway?”

My Pop has passed on now, and I hold dear in my heart his courage, for, after a lifetime of fear, he managed to pass on this knowledge to me, and I think – in his way – tried to start to undo the wrongs that had been done.

Throughout this journey, I have been supported, taught and welcomed by community in the most humbling of ways. I’ll never be able to thank them all enough.

I have gained even more of an insight into just how strong, resilient, courageous, tolerant, patient and generous Aboriginal people are – and have been – against all odds. Aboriginal people, my people, are warriors in the truest sense of the word, and I aspire to be the same.

To my Nanna Mirii, you were one of at least 100,000 children stolen. I honour you and I stand with you. I honour our people, and I’m going to try and learn and give back as much as I can. And in doing so, I hope this helps you find your way home.