In 1995, Pixie was one of the first women to be accepted into the British Racing school in Newmarket in the UK. She reflects on that time, and on the impact she may or may not have had on her industry.

Pixie Willo is a writer, reviewer, voice actor and performance poet from the Blue Mountains. For the last three years Pixie has worked as a theatre reviewer and interviewer for the Stages theatre show on 2ser as well as creating audio packages for Gay Panic. She is currently a member of the Playwrights of Parramatta dramaturgical group at The Riverside Theatre and works as a creative writer for Entertainment Blue Mountains. Pixie has had two plays chosen for the Short and Sweet playwriting festival, and she also runs the Off-Beat poetry slam in the Blue Mountains and was a finalist in the 2013 National Poetry slam. She is in her final year Studying a BA in Theatre, Performance and Creative Writing at UNE. 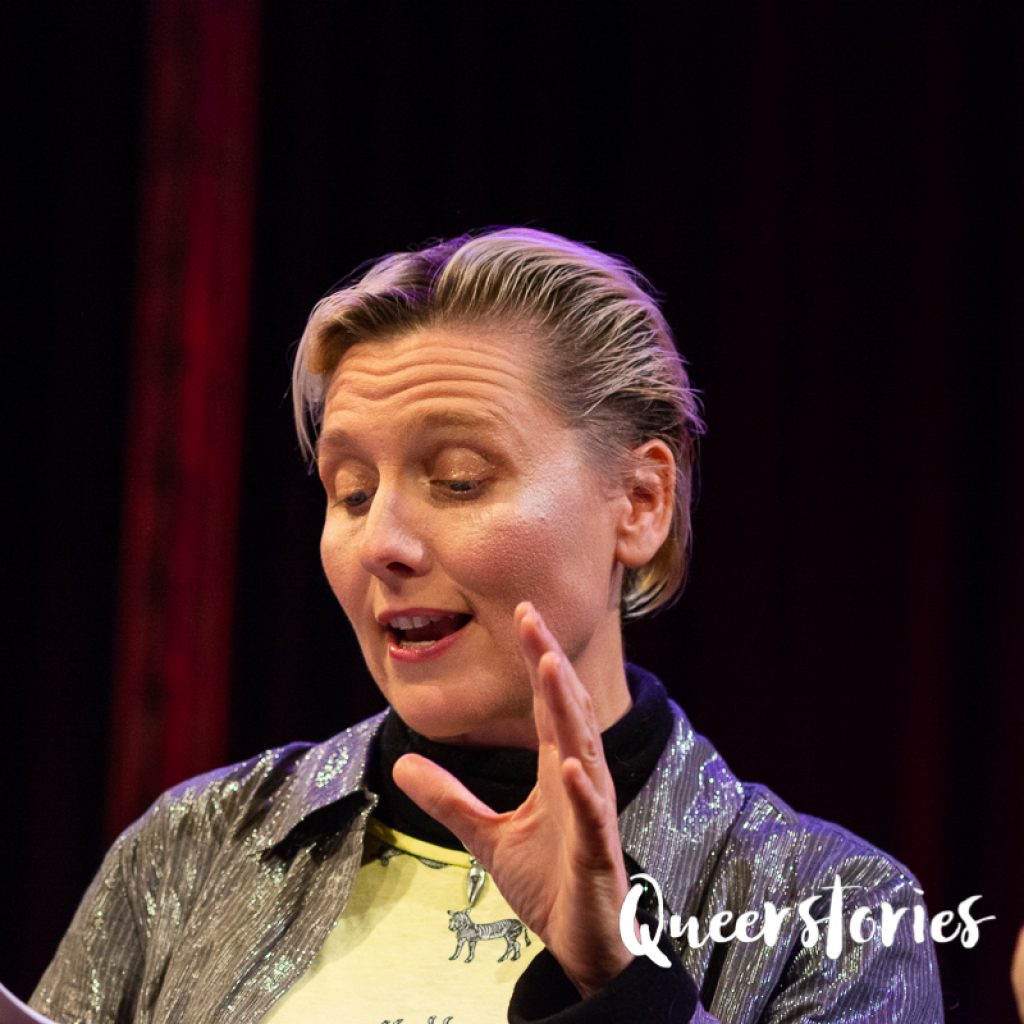 Pixie Willo is a writer, reviewer, voice actor and performance poet from the Blue Mountains. For the last three years, Pixie has worked as a theatre reviewer and interviewer for the Stages theatre show on 2ser as well as creating audio packages for Gay Panic. She is currently a member of the Playwrights of Parramatta Dramaturgical Group at The Riverside Theatre and works as a creative writer for Entertainment Blue Mountains.

Some years ago, I was one of the first women to be accepted into the British Racing School in Newmarket in the UK. I was fortunate enough to find a job at a racing stables that only employed women and steered young wayward girls in the right direction. And, I was one of those horse-mad wayward girls.

But, before I was allowed anywhere near a racehorse, my boss who was one of the first successful British women jump jockeys – my mentor and hero – gave me a retired racing pony to ride as my responsibility. My job was to lead the younger horses up the track and set the pace, every morning. Yes, I would even ride before school and catch up on sleep usually during my favourite lessons such as science or maths.

Tiger Jackets Timmy – That was his name. He would take off with me at the start of the gallop, and he would loop around and around at top speed, flying past the other horses, jockeys swearing and cursing at me as the younger horses picked up their bits and joined the impromptu race. Meanwhile, I was hanging on for dear life, waiting until Timmy finally ran out of steam and trotted back to the stables, as if butter wouldn’t melt in his mouth. That horse always looked like he was mocking me.

Don’t get me wrong, he was a champion in his time. Plus, I was only five and a half stone. That’s about 35 kilos in your money. So, I couldn’t really hold a leg of anything.

When I finally got to ride a real racehorse on the track, after a year of this happening, I was over the moon. This is what I’d been waiting for. This particular horse, though, had just come back from a season of rest, and I swear it was like riding a dumpling on legs.

I couldn’t get this horse to move beyond a slow canter. My memory flickers to images of Thelwell cartoon ponies. I don’t know if any of you know Thelwell, but the ones with the really fat ponies and the tiny girl balanced on top like a pea on a mountain, legs flapping against the horse’s sides.

And the reluctant mount just munching on the grass, refusing to budge. Well, it looked a lot like that.

I was the laughing stock of the yard for quite some time. That was until I started sneaking her extra oats in her feed. As soon as I got her going, my employer saw that I was ready for my apprenticeship as a jockey and applied to the British Racing School, who had just opened their doors to having women train there. I guess it was a bit like a boarding school for jockeys, and I was one of the first five women to be accepted into that school shortly after my 16th birthday.

The Racing School was nothing like the Enid Blytonesque view of English boarding schools that I had imagined. It was more like a military camp. We were up at 5 A.M. every day and would drag ourselves exhausted and dishevelled into bed way past 9 P.M. The boys at the school, however, I soon discovered, had privileges. They only needed to run two miles a day, but us five – or the A-Team as we called ourselves – were made to run four. Instead of this breaking us, this actually united and strengthened our friendships. We became a force to be reckoned with. And, I also discovered that I was a really good long-distance runner.

By the end of our three-month training, we were like unstoppable machines and had forged an unbreakable bond. We were weighed on a weekly basis and publicly shamed and humiliated if we had gained any weight, while, you guessed it, the boys weren’t. As we were told that apparently, “Women have more of a propensity to put on weight than men.” But nobody factored in that muscle weighed more than fat.

There were some truly unforgettable moments, though, like having the opportunity to ride Princess Anne’s first winner, Engulf, whom she had donated to the school, even though it was Prince Charles’ photo that dominated the Patrons’ Gallery.

When I graduated, I was offered employment as an apprentice with a well-known but smaller trainer in Newmarket. And, of course, I jumped at the opportunity. This was in the hub of the racing world, and I would be riding on the flat, which was less dangerous than the first yard of huge steeplechasers and national hunt horses I had worked with before. With my previous employer’s blessing, I accepted this position.

Luckily, the A-Team had all stayed within the same town. We all kept in touch as friends and continued to socialise together. Some of us became housemates, and we would often see each other when the masses of racehorses horses congregated on the heath every morning to train. Breath steaming, hooves stamping, cheery waves and whistles everywhere. Although the air was often blue as a horse became out of control, and the other riders struggled to hold their steeds.

The A-Team would meet for a Sunday breakfast every week and it became our tradition. As most of us were quite far from our families, our friendship – this sisterhood – forged the shape of our own unique family. However, within 18 months of graduating, one of the five girls – and my good friend – died under a horse. Another was paralysed from the waist down in a racing accident. One married a trainer in Ireland. Another ended up as one of a sheikh’s four wives and moved to Dubai. And then there was me who didn’t fit anywhere, and eventually ran away to Australia… but that’s a different story.

When my friend died, I didn’t realise how much it affected me. She was one of the few people I could confide in about my sexuality. After she died, I stopped going to church. And I remember one mad day, a few months after it had happened, I tried to convince myself she was still there and it was just a huge misunderstanding. I ran up to a complete stranger screaming my friend’s name in joy, or maybe hysteria, and threw my hands around her neck, sure that it was her. I can still remember the look of abject horror and shock on this woman’s face to this day. This was a very lonely time for me. I started to grow a hard shell and I stopped letting people in. I kind of became a bit of a one-woman army, determined to succeed, determined to win for the sake of my friend who was not just another number, I would not let her death be in vain.

After much anticipation, cleaning my bosses flat, washing his car, getting up at 4 AM every morning and working 13-and-a-half days before I had a day off for a mere 30 pounds a week, my first race finally came. I was riding a four-year-old mare called Queenie. She was mine to ride as she had been beaten by men, and she would dump them as soon as they were astride her. She just needed love and gentle hands, like all women do.

I soon discovered I was scheduled to race her at Southwell in a six-furlong sprint. Excited? Oh, my God. You have no idea. This was my dream come true but there were several drawbacks to this. Firstly, Southwell Racecourse is a dump. It’s a nothing track in the middle of nowhere. Here, horses raced on the all-weather, which meant hard lumps of concrete, like dirt the size of boxing gloves, smashing into you from the kickback of the other horses’ hooves, until you’d managed to squeeze out in front, like threading a needle.

And the absolute worst thing, the weighing room, was in the men’s changing room. That doesn’t sound too bad, but when you weigh a jockey before a race, they are stripped down to just their underwear and are holding the racing tack – saddle, bridle, silks, hat and weight cloth as they sit on the scales. Still, there I was, shivering in my underwear about to get on the scales and holding what felt like my own body weight -and probably was – on my arm, whilst over 30 male jockeys strutted about in the nude, lewdly catcalling and whistling, animalistic jeers. I was the only woman jockey that day. Luckily, I had minders with me, as I can recall a few tried to grab at my tiny child-like 17-year-old body. I should have been excited but, instead, I felt sick, frightened and nervous as hell, but staunchly determined to prove the world wrong.

Everyone had come to watch: My family, my friends, even my previous boss. Everyone except my girlfriend. I was advised by my trainer that it wouldn’t be a good look if I wanted to get anywhere in the industry, and I was naive and gullible enough to listen. My girlfriend ended up having to watch me on the TV in the bookies, and I brought a guy to beard with as my partner. We ended up actually bearding for three years.

I finished the race, a close second, exhausted and covered in bruises and mud, feeling like a trailblazer for women everywhere but, actually, not even a blip on the horizon.