Peter Taggart attempts to satisfy his curiosities in a rural heterosexual wasteland.

Peter is a writer and podcaster from Brisbane. He was born on the glittering Gold Coast and raised in St George – a small farming township in southern Queensland.

Peter has written for Junkee, The Guardian, Meanjin and SBS, has hosted shows on 2SER/Star Observer Digital and 4ZzZ and has contributed to various programs on triple j and ABC Radio Brisbane. His podcasts include the popular Bring A Plate and less popular Clip Show.

Peter is featured in the Queerstories book which can be ordered on Booktopia. 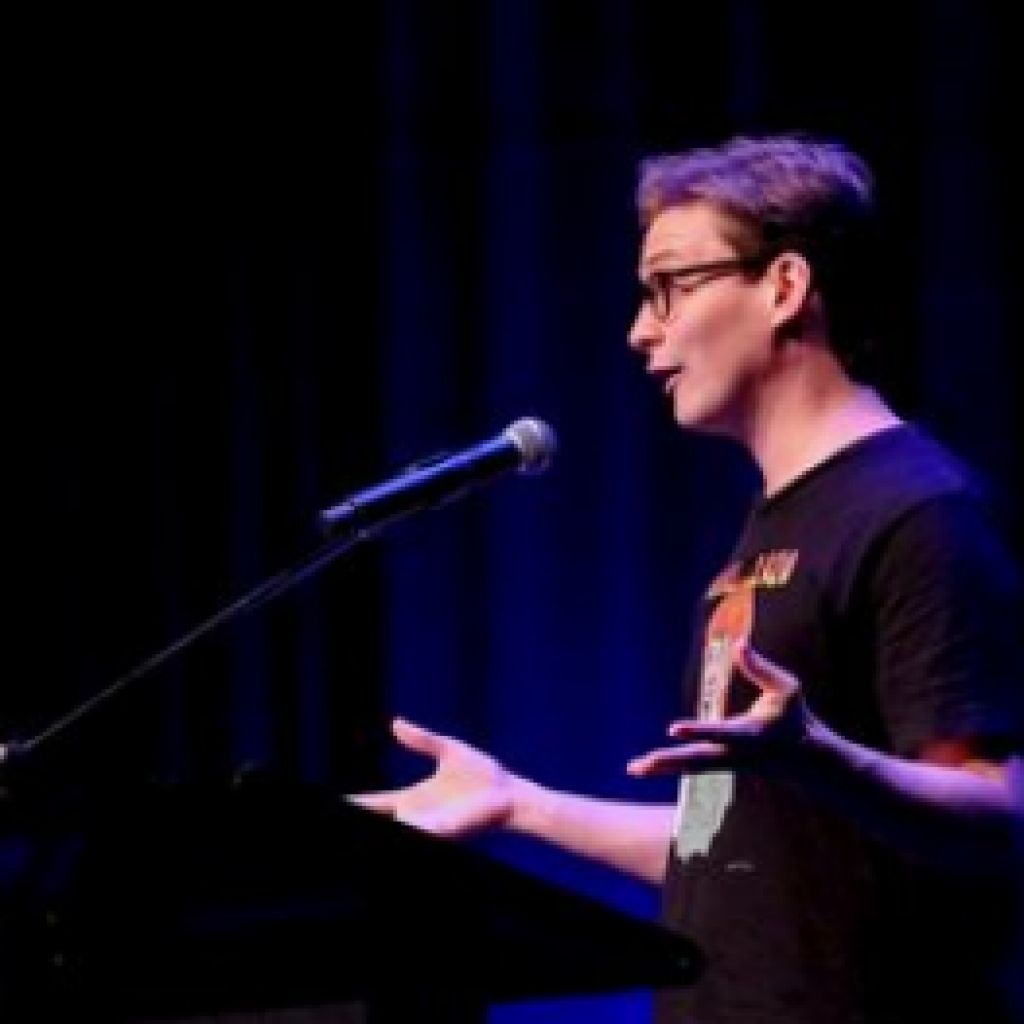 Hi. I’m Maeve Marsden and you’re listening to Queerstories – the podcast for the LGBTQIA storytelling night I host and program in Sydney and Melbourne. Next up – Peter Taggart is a writer and podcaster who has written for Junkee, The Guardian, Meanjin, and SBS. He has hosted and contributed to shows on 2SER, 4ZzZ, Triple J, and ABC Radio Brisbane. His podcasts include the popular Bring A Plate, with Australia’s favourite lesbian, Rebecca Shaw, and the less popular Clip Show. I had been hearing about Pete from Rebecca for about two years, so it was awesome to finally meet him at the first Brisbane Queerstories at Brisbane Powerhouse earlier this year. This story will be published in the Queerstories book, due for release in September 2018.

This year I returned to my home town in south-west Queensland for what felt like the final time. After a two-year absence, I made the trip to pack up the family home and help my mother move to a new one in Brisbane. St George is about 500 kilometres south-west of Brisbane, a country of cotton and cattle. I spent my first 17 years there, riding my push-bike on the outskirts of town, daydreaming about what my life might be like in a place big enough to have its own McDonald’s.

As is often the case, my classmates in St George seemed to be aware I was different before I did. They took a particular joy in pointing out any trace of a lisp or a flamboyant gesture. If anyone was direct enough to call me a faggot, I would always respond, “You know, a faggot is actually just a bundle of sticks,” which is not just the perfect answer of a faggot, but of a huge nerd as well.

In the early noughties, the gayest thing a man ever did in St George was sit down to urinate. Bootcut was the only acceptable type of jean and Brokeback Mountain had not yet been released, ruining everything for everyone. Growing up there was to grow up in a homosexual vacuum of sorts. I was aware of gay people but they were presented a sort-of neutered. I found it difficult to picture them having active sex lives, and whenever I did try and imagine what two men could conceivably do with one another, it was akin to torture. I was totally clueless.

I recall one head-scratching moment when I was a 14-year-old on school camp. Finishing a meal in the rec hall one evening, a friend returned to my table with two bowls of dessert. She held up the steaming sticky date pudding and said, “You know what they call sticky date, don’t you? Poofter pie!” We both laughed at the time but I returned to my dorm that night deeply confused.

“But how does that work?” I thought. “Why would it be called that? Where’s the “pie”? And what is sticky, and how?” I mulled over this for months, like it was not a dirty joke, but a brilliant math equation.

Before I could fully come to terms with my sexuality, I needed to satisfy the curiosity and find out whether I truly wanted what my pubescent mind was telling me I wanted. In a town like St George, it would mean a wild scavenger hunt for clues, and I’d have to explore the old fashioned way – through magazines and television, and possibly the microfiche at the local public library.

My ready access to straight pornography was perhaps the cruellest irony. I had a job at the local newsagent, and I’m not sure many people know this but most old magazines don’t get returned to their publisher. I hope I’m not blowing this story wide open, but the bulk of magazines just get dumped out the back of the shop. So behind the newsagent, there was a huge trailer filled with Ralph and Penthouse and Playboy. It was quite the treasure trove, but slim pickings if you were more interested in, say, Chad Michael Murray than Carmen Electra. This was the early noughties, as I’ve mentioned.

There was only really one magazine reliably publishing full-frontal photos of men. That’s right, I’m talking about The Picture’s Home Blokes. Home Blokes was a regular one-page feature in the magazine and was a pre-Tinder outlet where straight men could send in pictures of their dicks. This was essentially straight men throwing a bone – sometimes literally – to gay men. But before we honour these brave pioneers for their act of charity…

.. It’s important to note that Home Blokes was so revolting, it may have been a sly form of gay conversion therapy.

Firstly, imagine the type of man who would send in a photo of himself to The Picture. Then imagine the most tortured looking penises that could still be expected to hang from a live human body.

Trying to be turned on by Home Blokes was the equivalent of getting home from a big night and staring down a lone can of asparagus soup in your pantry – you don’t have a taste for it, you certainly don’t want it, but if you don’t eat it – you’ll starve.

It was after the Home Blokes discovery that I first got a TV in my room – a pivotal moment. A TV of one’s own afforded a liberation I hadn’t had previously and suddenly I too was free to roam late-night SBS. It’s a common story that men around my age would secretly watch the US version of Queer As Folk, which aired at 10 PM on a Monday night. I would watch with the sound completely muted, patiently sitting through every episode waiting for someone to hook-up. It was a deeply rewarding exercise.

I’ll never forget watching Emmett get fucked in an aeroplane bathroom by his elderly partner – who then promptly died of a heart attack while still inside of him – and thinking, “Look at all the wonderful possibilities the future holds.”

When Queer As Folk eventually finished up on SBS, it was thoughtfully replaced by a show I found a lot sexier  – HBO’s prestige prison drama Oz. I hate to say this, but as a teenager, seeing Christopher Meloni’s penis once a week wasn’t really cutting it. Getting reasonable internet access at home was a real game-changer, and by reasonable, I mean country-reasonable. The download speed was so slow that if you wanted to watch something on, say, a Saturday evening, you’d really have to get organised around Wednesday morning. This type of planning ahead has produced a generation of incredibly organised queer millennials.

I was, of course, terrified by the prospect of Mum or Dad ever coming across any gay image, so I became an expert at clearing search history and deleting cookies. Fearing I’d not been as vigilant as I’d thought, I hatched a plan to really throw them off the scent. I decided to download some hardcore straight pornography, and in a normal move, printed the pictures out and assembled them as part of a gorgeous scrapbook.

I would keep this scrapbook in a drawer in my bedroom and wait for it to be discovered by a curious parent, whose only response, I assumed, would be overwhelming relief. Now, when I say scrapbook, I hope you are not envisioning some hastily-prepared teenage interpretation of a girly mag. This was carefully-curated and artfully executed. This was Anna Wintour preparing the September issue of Vogue. I even went to great lengths to ensure a variety of women were represented, from the big-breasted to the frankly enormously-breasted.

Sadly, the scrapbook was never to be picked up. I’d overestimated both my parents’ interest in my private affairs and their willingness to clean my room. Abandoning all hope, I disposed of it years later. I know it probably ended up beneath some beer bottles at the local tip, but in my wildest dreams, it’s sitting next to House & Garden in a doctor’s waiting room.

After moving to Brisbane at 17, it took some years to forgive myself for these bizarre, hormone-fuelled episodes, but forgive myself I did. And while I still felt like I had a lot of catching up to do, I soon shrugged-off the burden of understanding all aspects of gay life and started living one on my own terms. I recognised that in St George I’d done my best with what I had. I’d made lemonade out of lemons, and a faggot out of a bundle sticks. Thanks.