Author Peter Polites remembers his visits to the Greek and Gay Group – GAGG.

Peter Polites is a writer of Greek descent from Western Sydney. As part of the SWEATSHOP writers collective, Peter has written and performed his work all over Australia. Alongside SMH Best Young Novelists Luke Carman and Michael Mohammed Ahmad, Polites wrote and performed THREE JERKS – a spoken word piece about the Cronulla riots – to sellout crowds in Sydney and Melbourne.

His novels Down the Hume and The Pillars are published by Hachette, and he is featured in the Queerstories book which can be ordered on Booktopia. 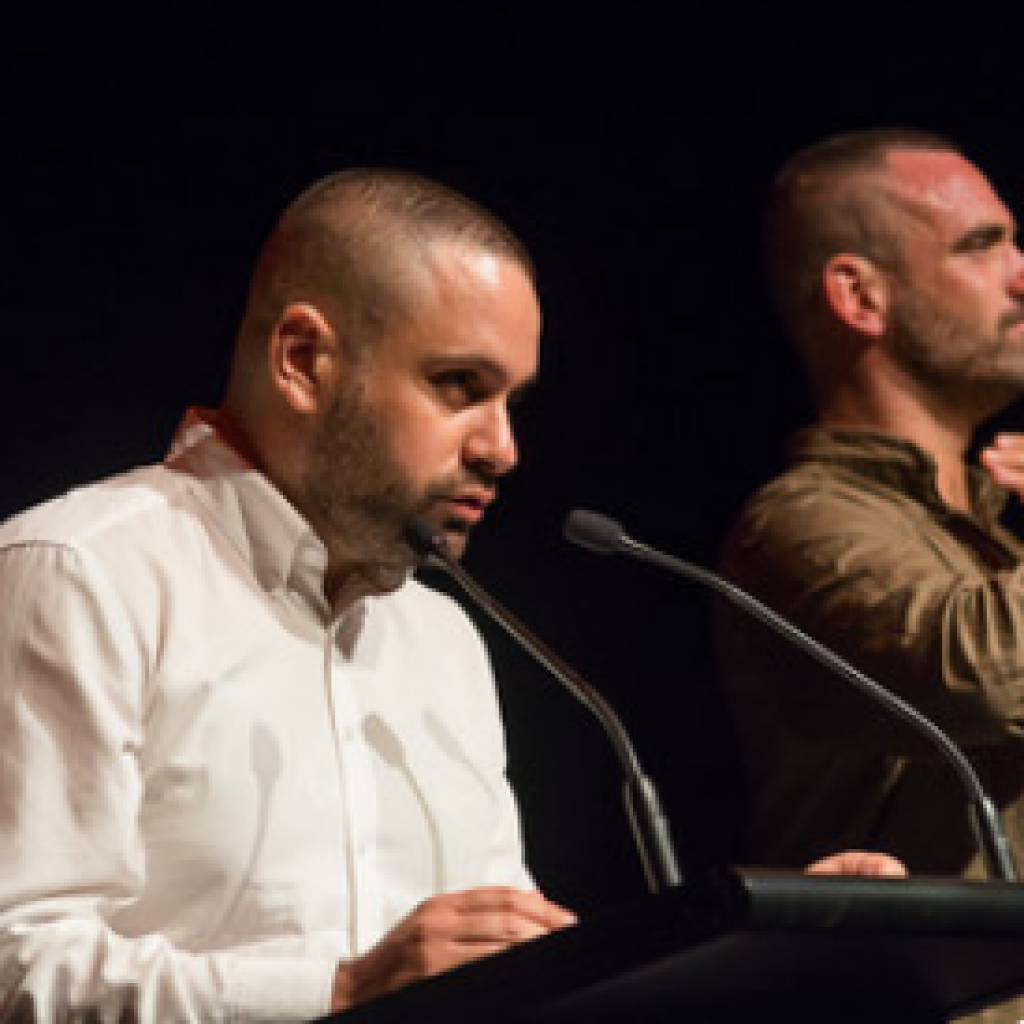 Hi. I’m Maeve Marsden and you’re listening to Queerstories – the podcast for the LGBTQIA storytelling night I host and programme in Sydney and Melbourne. This week – Peter Polites is a writer of Greek descent, an associate director of Sweatshop Writers Collective. His first novel, Down the Hume, was published by Hachette. I’m excited to be publishing a collection of stories from Queerstories, also with Hachette, later in 2018. Peter performed at the Western Sydney Queerstories I hosted at Riverside Theatre, Parramatta for Sydney Mardi Gras.

Greek Lesbians do the best Zeibekiko. I learned this in my twenties when I went to the Greek and Gay Group: GAGG.

I also learned Greek Gays are just as gross as Straight Bros. The men would say “Welcome to GAGG!” & after saying the acronym, they would make a choking sound.

The meetings were always held after work hours and started in the dark. They were never signposted, there was an unacknowledged secrecy around them. People would park their cars down the street from the community centre. Afterwards, no one would hang out the front talking. Going to GAGG reminded me about an old nursery rhyme my mum used to sing to me. In the nursery rhyme, children would ask the moon to show them the way to school. The nursery rhyme was a few hundred years old. The lyrics originated during the Ottoman Occupation of Greece, and the song was a memory about a time when children used to go to school at night to learn their language. The reason they went at night was because learning Greek was banned under penalty of death.

I used to look up to the moon to show me the way to GAGG and at the time I went searching for my own personal Hoplite slash Soccer Player, but GAGG was frequented by lesbians and gay men in their thirties who still lived at their parents’ homes. The umbilical cord strangles the Greek children of the diaspora-

..and the meetings always descended into what looked like shouting matches but were just talking.

I didn’t find a Hoplite slash soccer player. I did meet a young lesbian who grew up a few streets away from me. She had been coming to the meetings, quietly sitting in the corner and occasionally filling up her paper cup with instant coffee from the samovar. Her parents called her Soula, but she introduced herself as Tas. She had fine white skin, the deepest blue eyes and a button nose. Her features were emphasised with a pageboy haircut that swept over the left side of her face. When Tas spoke, her vowels dropped three octaves and the consonants frizzled at the end.

At one meeting, the shouting turned into dancing. All the gay men did the Tsifteteli, and when we were tired from shaking our hips we played the slower songs of the Zeibekiko. Tas got up off the chair and walked into the middle of the room. She mapped out the one-metre space she would be dancing with her feet. The rest of us surrounded her, some got on our knees and started clapping to the rhythm. She put her foot down with mourning, her hips were lonely, the body and its problems stayed anchored to the ground. Her arms extended out like the wings of an eagle, her soul trying to break free from the circular and limited movements. The Zebekiko is about mourning and loneliness and only done by men, but Tas expressed heavy steps, we felt it, we felt her and she danced as us.

I asked her out on a friend date and we met at The Corinthian Restaurant. It had been run by the same Greek family for the last thirty years. The Corinthian was there in the eighties when Greek youth gang wars littered the streets with bloody knives and exploded Yeeros.

Back in the day when graffiti on bridges claimed that Cops Killed Tasos, The Corithian opened every midday, serving its casserole and lamb and taramosalata. We met out front and sat down opposite each other. Each table had a candle covered in glass that scattered the light over the cloth. There were heavy arches that rose up the walls and curled over the ceiling, they had Stucco on them to give the effect of blunt stalactites. The arches gave the place the feel of a cave.

We ate and Tas told me stories. When Tas was a teenager, she walked into the kitchen with a new boy-short haircut, neither parent said anything. They heaped more green beans on her plate and they ate as a family. Once, when going to a cousin’s christening at the church, Tas debuted pants and collared shirt, her mother looked up at her and gave her the car keys. Floating around their interactions were thought bubbles of expectations. Expectations that she would have to take care of them into old age, pushing them in wheelchairs down the church isles.

She told me her story like a confession. Her voice increased in decibels and sharpened like iron bolts. Her big eyes opened more, and her palm extended flat and hard as it chopped invisible bits of the air. Her voice was directed at me, and for a second I looked around to see if it was reverbing onto any of the customers, but The other Greeks didn’t notice. They chopped the air just as much as she did, and I realised what I took for vibrancy was just people talking loudly.

I used my fork to scrape mince from the bottom of my plate and I asked Tas if she was ready to give up her own life to save theirs. “It wasn’t giving up life,” she said. “It was just compromise.” Tas told me the ritual that she undertook to put her mum’s wheelchair in the car. Rolling her next to the open passenger’s door, sliding her feet off, her mum holding onto the car door as she swirled her body to the seat.

She went to the Greek church on Sundays, finding parking and rolling her Mum up the side ramp. She stood next to her Mum while old men sung ancient hymns. When the priests went off-topic and said that women wearing pants were poisoning society, old women with their heads covered in black scarves turned to look at Tas. When the priest went off-topic and went on a rant against the homosexual influence in the Australian community, Tas stood stoically behind her mother’s wheelchair and took a deep breath.

“Weren’t you affected?” I asked Tas.

I told Tas I needed a cigarette after the meal. I went outside onto Illawarra Road, and a dry viscous wind ran through me. All the shops had closed and the streets were empty. I stood close to the road and mapped out the one-metre space where I would stand in while I smoked the cigarette. Around me, cars crawled along the street and doors slammed shut like people clapping. I swayed to the wind and smoked away, moving my hand up to my mouth in a repetitive slow gesture. I exhaled the blue smoke and it rose to the sky and dispersed. Just as my cigarette ended, I flicked the bud onto the ground, the soul of my foot stepped heavily on the pavement to extinguish it, and I extended both my arms up as I spun around slowly to re-enter The Corinthian. Thank you.