Nevo Zisin is a Jewish, Queer, non-binary activist, public speaker and author of Finding Nevo, a memoir on gender transition. They run workshops and professional development in schools and workplaces around gender inclusivity. They have appeared on SBS Insight, Hack Live, One Plus One, The Morning Show and other media. Nevo is a contact point in the Jewish community for other children and families confronting issues of gender and sexuality in their own lives. 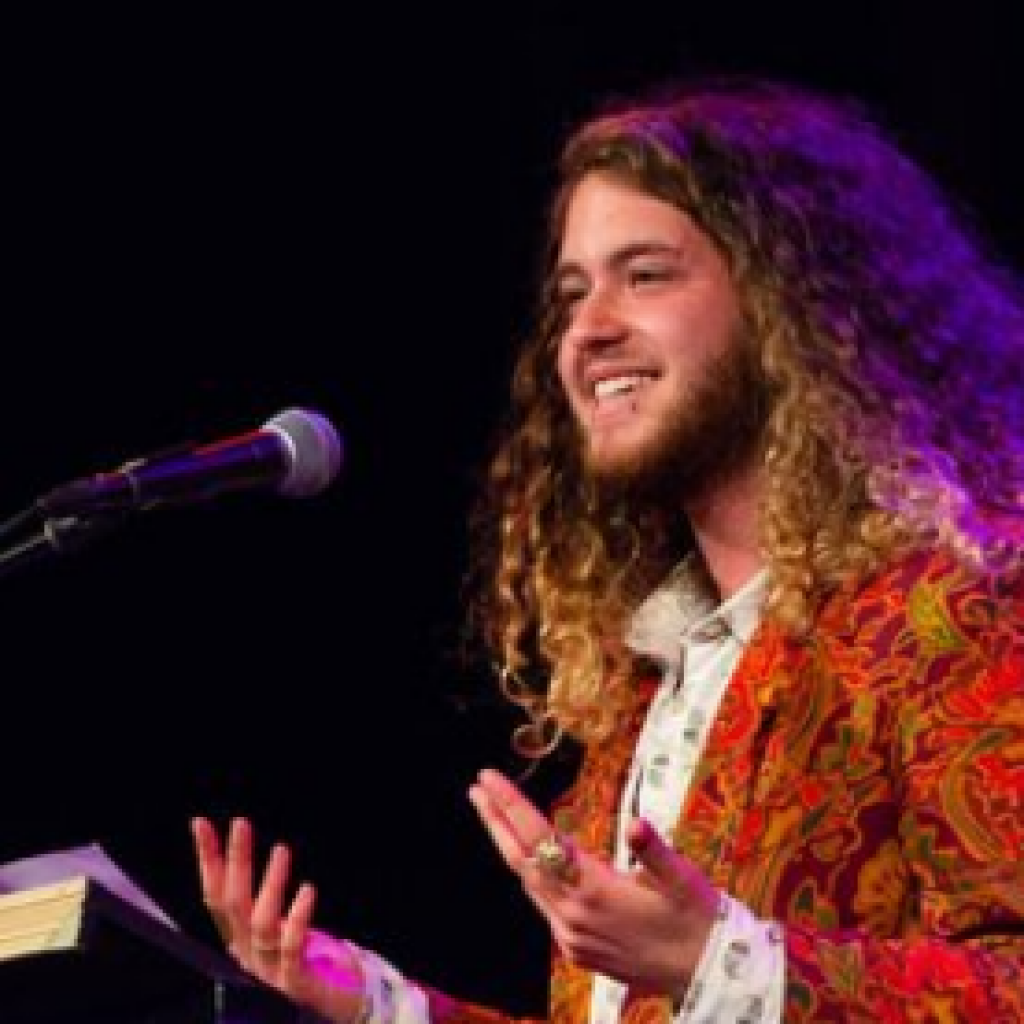 This week –  Nevo Zisin is a Jewish, Queer, non-binary activist, public speaker, and author of Finding Nevo – or as I read it, Finding Nevo, which is a ridiculous pun that delights me –  A Memoir on Gender Transition. They run workshops and professional development in schools and workplaces on gender inclusivity. They’ve appeared on SBS Insight, Hack Live, One Plus One, The Morning Show, and many radio interviews and articles discussing their complex relationship with gender. Nev is a contact point in the Jewish community for other children and families confronting issues of gender and sexuality in their lives.

I really enjoy confusing people. I’ve made a hobby out of coming out. I have identified as a straight woman, bisexual, lesbian, gold-star lesbian, binary transgender man who is straight – LOL.

Queer boy, fierce fag, dainty dyke, pool-playing poof. You name it, I’ve probably identified as it. I like to think of myself as a conservative’s worst nightmare, so I figured I would lean into that and speak on one of the key objectives of the gay agenda: Queering children.

Or, in the case of this speech, queering the idea of children.

It’s become really normal in the queer community that I move in to say, “You hate kids.” There’s a big difference between deciding that you don’t want to have your own children, for whatever reason, and saying that you hate them. So I’m going to tell a bunch of stories, which will prove that kids are, in fact, the greatest, far better than adults, probably better than you, and hopefully that will start to queer people’s perspectives on having kids, or hanging with them, or polyamorously co-parenting them.

I’ve been working with kids since I was one. I was babysitting from about the age of twelve, and if anyone has seen me around a baby they know that it’s a sight to be seen. My voice completely changes in pitch, my words stop making coherent sense, and it’s highly possible that I might start crying.

I warn people if we go to a café about this because while others may have gay-dar, I have baby-dar. I can tell that there is a baby in my vicinity and will likely be unable to focus on anything you are saying because… *Baby talk* I just wanna squish their face so badly!

A while ago, I babysat these two kids and then sort of took a little break to medically and socially transition. Then, I went back and their Mum was like, “So, they’re probably going to have some questions,” which I figured is fair, and she gave them a little briefing. I prepared myself, did some deep breaths in the car; most meditation I’ve ever done, and walked in there, ready.

They gave me a hug, and then as soon as their Mum was gone they were ready to ask the questions. They started with, “So… Do you have boy bits or girl bits?” Now, I had expected this question. I didn’t really anticipate the word “bits” but I was ready for it, so I kind of thought on it for a moment and said, “Hmm, I guess I just have Me bits.” They were satisfied with this, grabbed my hand, took me to the trampoline, and that was the end of the conversation.

I have had this happen over and over again. Once, I was a leader on a summer camp and was sitting with some Year Five kids. One said, “Are you a boy or a girl?” And then, the another responded, “Obviously a boy, he has a beard.” “Yeah, but he also has long hair and nail polish.”

I let them do this for a while. I was just sitting there. Because I was bored and sleep-deprived, eventually the conversation dwindled and I like confusing people, I just went, “Okay. But what would you say if I told you I was born a girl?” “Umm. Well, I’d probably say that you are transgender.”

Yeah. Actually, yeah. That… That would be correct. Sure showed me!

We then proceeded to talk about Steven Universe and how the-

Right? And how the gender neutrality of the characters is on purpose. And she asked me which episode was my favourite, and explained that hers was episode two-point-one-five.

I also worked as a swimming teacher for two and a half years for children, and this exposed me to a lot of really great kids stories. You can talk to me about some other ones afterwards. I couldn’t fit them all in.

My main goal while at work, secondary to teaching kids how to swim, of course, was to not cry in the pool, and I pretty consistently failed at this, particularly when one of my kids looked up at me while floating on his back and said, “I love you, Nep.”

And then she filled up her mouth with water and spat it at my face. I guess that’s what best friendship looks like.

Okay, but also later on in that class, she turned to the student next to her and said, “Oscar, you’re my best friend.”

And I was like, “What the fuck, Emelia? I am  right here. And although I’m polyamorous, it doesn’t mean’t I’ve worked through my jealousy when it comes to kids not loving me exclusively. There is no chapter on that in the Ethical Slut!”

Still working through that, obviously.

I’ve resolved that when I have my own children, I will dress them up in different animal outfits so that when someone asks me if they’re a boy or a girl, I can just reply, “A bunny rabbit, obviously.”

My siblings have taken my love of children very seriously, so seriously in fact that they have been kind enough to have their own children, so that I can hang out with them… and give them back. My niblings are some of my favourite humans. My niece Saphira – Also, I was talking about her earlier – there is no gender-neutral term for uncle or auntie, so we kind of went with Aunticle for a little while, but it felt like it was too close to Popsicle, and it just didn’t really read my gender, so I asked Saphira if she wanted to call me her Auntie or Uncle by day, and it changes. But then my siblings started calling me Spuncle, which I really like, because I am a spunky uncle. I mean, how many uncles wear shoulder pads, right?

Anyway, the other day, Saphira was talking about something, and she was saying how she was a girl. I was like, “Oh, maybe I’m a girl.” She was like, “No.” So I thought, Okay. “Well, what am I then?” I was really nervous. And she said, “You’re Nevo.” It’s like, “Yes. That’s correct.” Then she was wearing this really cute little pink dress. I was like, “Oh, I want to wear that dress.” She’s like, “You can’t.” I got really upset because I was like, “So many people have told me that in my life, and I really didn’t think it would come from you. And I’m really sad that gender binaries have already affected you, and she said, “It’s too little!”

Which is true! It was too little for me.

My friend who is a nanny shared a particularly hilarious instance when they were babysitting, and the three-year-old ran into his parents’ bedroom, scuffling around a little bit. He returned shortly with a purple butt plug. He held it up proudly, “I’ve found a carrot!” My friend asked him where exactly he had found this carrot, so that they could put it back exactly where it had been. They had a good relationship with the mum, so mentioned they told them later and she was like, “Oh, the carrot. Yeah. Thanks for putting it back.”

Another friend recently was in hospo and met a three-year-old who came up and said, “Hi. My name is Matilda, but you can call me Daddy.” Her father looked very shocked, so she clarified, “I just like it better than Matilda.”

I have learnt more from children than I will ever be able to teach them. They have taught me about my gender, my values, and in one case, many extinct dinosaurs I never knew existed. Take a break from TED Talks, university lectures, and textbooks, and go and talk to a kid. You might learn something, and at the very least, you’ll have some good content. Thank you.