Mitch Hibbens speaks frankly and openly about his relationship to alcohol.

Mitch Hibbens is a failed athlete, emerging academic, Aboriginal activist and part-time Drag Queen. He has been a performer all his life but has only recently stepped onto the stage. A Wiradjuri man and country boy to his core, Mitch currently volunteers his time as an Indigenous Rights Campaigner for Democracy in Colour. He is a Board Member at the local Aboriginal Health Service and is employed in the tertiary education sector working in Indigenous student support. As an emerging “Blackademic”, Mitch uses his writing to highlight unequal power differentials & racialized discourses to build collective momentum toward change. 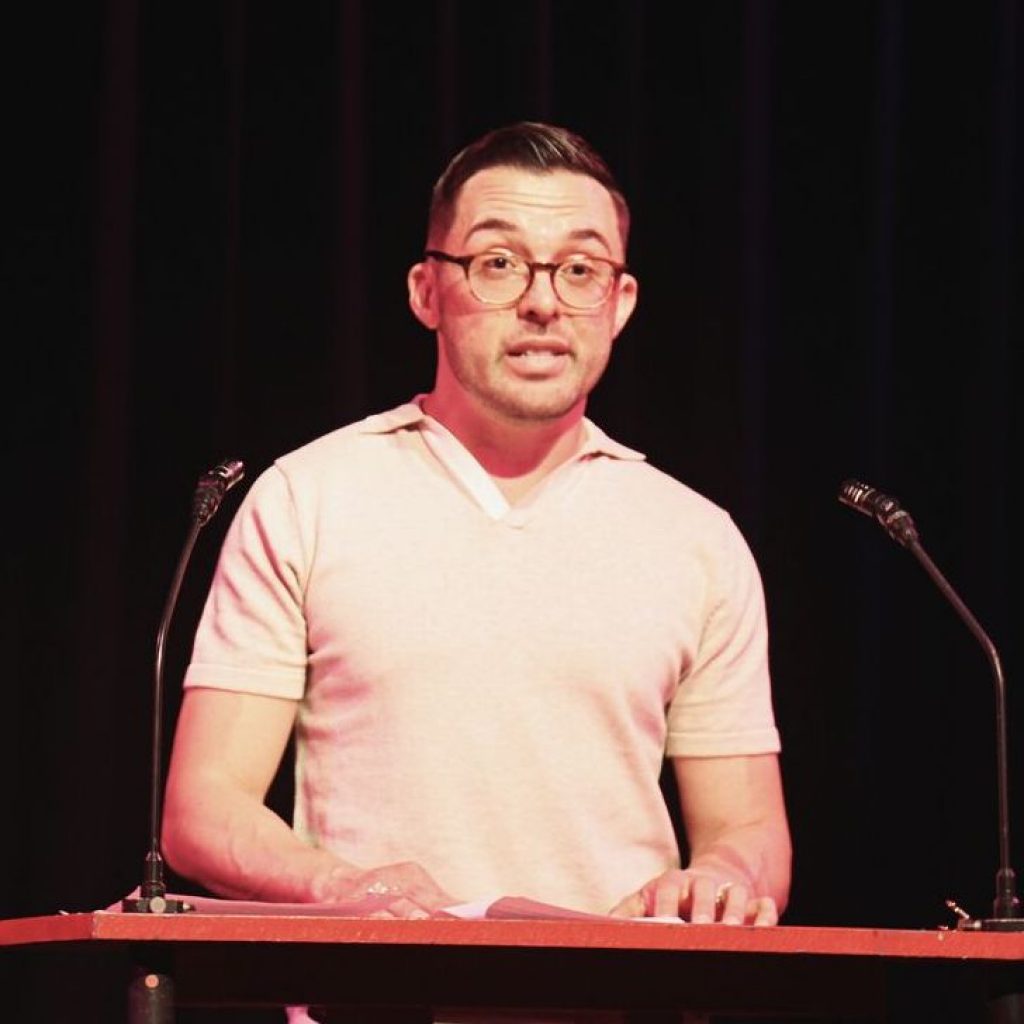 Mitch Hibbens is a failed athlete, emerging academic, Aboriginal activist, and part-time Drag Queen. A Wiradjuri man and country boy to his core, Mitch currently volunteers his time as an Indigenous Rights Campaigner for Democracy in Colour. As an emerging “Blackademic”, Mitch uses his writing to highlight unequal power differentials & racialised discourses to build collective momentum toward change. Mitch performed at the first Albury/Wodonga Queerstories in September 2018.

It was the strangest feeling, you know, the one were you wake up in a hotel room, and for that split second, you’re beset with giddy and confusion. “Where am I?” “Where am I?” I ask myself again. I sat up, and I inhaled the cool morning air deeply into my lungs and took in my surrounds. It was only then that I realised that I wasn’t in some swishy hotel room on a work trip. I was in a gutter. No, culvert, I think it’s called.

My head felt like it weighed a million tonnes. My mouth was parched and dry. The shirt that I had been wearing the night before no longer resembled a shirt, but rather it was shreds of fabric clinging desperately to my body. It was torn and tattered. I started to wonder, “How did I get here?” Not just to this physical place but this very moment in time. “How did my life lead to this point where I was all alone, sitting in a ditch, for fuck’s sake,” without the slightest clue about how I got there.

To understand, I suppose, we’ve got to do a bit of time travel, back to my childhood of the early ’90s. I grew up in Tumut. The word Tumut means resting place by the river in my language, Wiradjuri.

One of the few remotely remarkable things about the place.

I would often think as a teen, sometimes it was hell growing up there, at least until the advent of dial-up internet, if you know what I mean, which, when it worked, gave me a window into the world that I desperately wanted to be a part of; the gay world.

My parents shared poverty as their common experience, although very different. My father, white and poor. My mother growing up black, Aboriginal and poor. Among other things, they also shared a hatred for alcohol, stemming from their own childhood experiences, I suppose.

My paternal grandfather was a hardworking, hard-drinking kind of man. Coupled with a foul temper at the best of times, he was hard on my dad for being too emotional and sensitive. And, like many people, Dad was loathed to be like his father, and so he decided early on that the thing that would make him different was not to drink, and so that’s what he’s done for the last 57 years.

Pop, my maternal grandfather, or JB as he was known to so many, was an alcoholic, not in my time knowing him. In fact, he was the gentlest, kindest soul, and I still miss him dearly, twelve years since he left this place. But he wasn’t always this person. When he was on the bottle, when he was on the drink he was an aggressive, horrible man. I remember Mum telling us the stories about when Pop would drink. Nan would bundle six, seven or eight kids into the car, and they’d spend the night sleeping down by the river. Sometimes, it would be hiding out under the house in the middle of winter, as Pop in his drunken stupor would sit inside in front of the heater while his kids shivered outside.

I admire my mother’s capacity for forgiveness. She never once said this changed the way she loved her father. It did, however, inform Mum’s values about drinking. Mum didn’t drink. She was very strict. Drinking was the ultimate taboo in my family. You can’t blame her though. She’d only seen this really lecherous way that alcohol had impacted on her own family and her father.

Pop was born in 1939, and from the moment he and his siblings were born, they weren’t wanted. As Aboriginal kids in the 1940s, their lives had little to no value. Before he was ten, he was taken to the boys’ homes. We don’t know much about this time, except Pop saying that all he remembers was sleeping on the cold, cold cement floors, and being woken with a bucket of cold water, and told to scrub the very floors that were his bed.

We knew he’d been to jail. He bore the prison tattoos on his arms. We would only see them momentarily when he would mow the lawn, rolling up his long-sleeve shirts that he always wore. He was ashamed when we’d ask about them. He’d unfurl his sleeve and button them back down tightly as if to signify that was the end of the conversation.

I suppose when you take into account this history, it was certainly no surprise that my Pop, JB, turned to drinking. As a black boy, a black man, he didn’t even have the love of his mother. Alcohol was his medication. It was the only way that he could salve the wounds of his traumatic past. But sitting there in the ditch, I wondered, “Fuck, I’ve been so privileged. I didn’t have any of that trauma. What is my excuse? Why am I here? Is it just because I’m some kind of pathetic failure?”

Isn’t it funny? We always seem to self-diagnose and pathologise our weaknesses, not our strengths. So, still seated in that ditch, I began to run through a checklist of all my failings. Like many, coming out wasn’t easy, but that wasn’t why I drank. What was my trigger to drink so dangerously? I began to think of every possible reason, as I sat there in the gutter, I mean culvert or whatever the bloody hell it was. I thought of the first time I tasted alcohol. I was 18 years old. Such a good boy waiting ‘til I was legal and all.

I remember the moment so clearly because it was such taboo in my family. It really was the forbidden fruit. It was a cocktail, of course. None of this drinking Dad’s half-empty VB cans as most kids seem to do. It was a Fruit Tingle. It couldn’t be any gayer, let me tell you.

Jokes aside, it was from this very point in time that my life went into a bit of a spiral. Sure, I had plenty of fun in the years that I drank – fun that I can remember anyways – But they were overwhelmingly weighed down with so much crap. It was shit. I’m not going to bore you with every single fuck up, but know they were numerous and frequent, and destroyed relationships and friendships; a constant toll.

One of the things I used to think was, “Was it because I was Aboriginal I couldn’t hold my grog?” I would buy into this bullshit narrative about blackfellas and grog. It was something that I was reminded of every time I drank by people around me and by myself, and in some ways, I think I was indoctrinated to believe it. But nah, this wasn’t the reason that I drank.

So many thoughts were racing through my mind. But all this soul searching meant nothing, as I sat there in the ditch as the sun rose. I think I knew all along why I drank to distraction: I was just in constant denial. It was too hard. So I had to face my own demons, not in a comfy couch in a therapist’s office, right then and there in that mother fucking ditch, and so I did.

There’s something about the morning light that seems to bring a clarity to my mind. It was then that I thought of all the family I had lost to alcohol. They, too, were alcoholics. Many died alcoholics. Some still alcoholics. Dying in the gutter, dying alone… So many lives and all their worth gone in an instant. I thought I wasn’t worthless. They weren’t worthless. I was loved, valued, and wanted.

Now, it’s pretty cliché to say that we have to reach rock bottom before realising what we have – blah, blah, blah – but it was really true in my case, and I wasn’t going to let this moment or this substance define my existence, although in an ironic way it kind of has – I’m standing here telling a story about it.

But I was going to do shit with my life for all those who didn’t or couldn’t. I owed it to them – my parents, my grandparents, my ancestors – to do better. And so, I got up from that ditch, which was now more than just a ditch. It came to represent the depths of my addiction from which I rose. I gathered my fabulously tattered shirt and I strode off into the new day. Thank you.