Liz Duck-Chong recounts memories of her life and her story is a real story, but it isn’t the whole story. Not yet.

Liz Duck-Chong is a writer, sexual health nerd, photographer and musician who almost exclusively wears odd socks. She has had her work featured in the Sydney Morning Herald, Crikey, Meanjin, Kill Your Darlings, ABC Online, SBS Online, Archer Magazine, Junkee, and Overland. A proud trans and non binary woman, Liz is a true renaissance figure in the sense that most of them were really gay. She can be found on @lizduckchong or co-hosting @letsdoitpodcast, a podcast about queer sexual health.An extended version of this story will be featured in the new Queerstories book which can be pre-ordered on Booktopia. 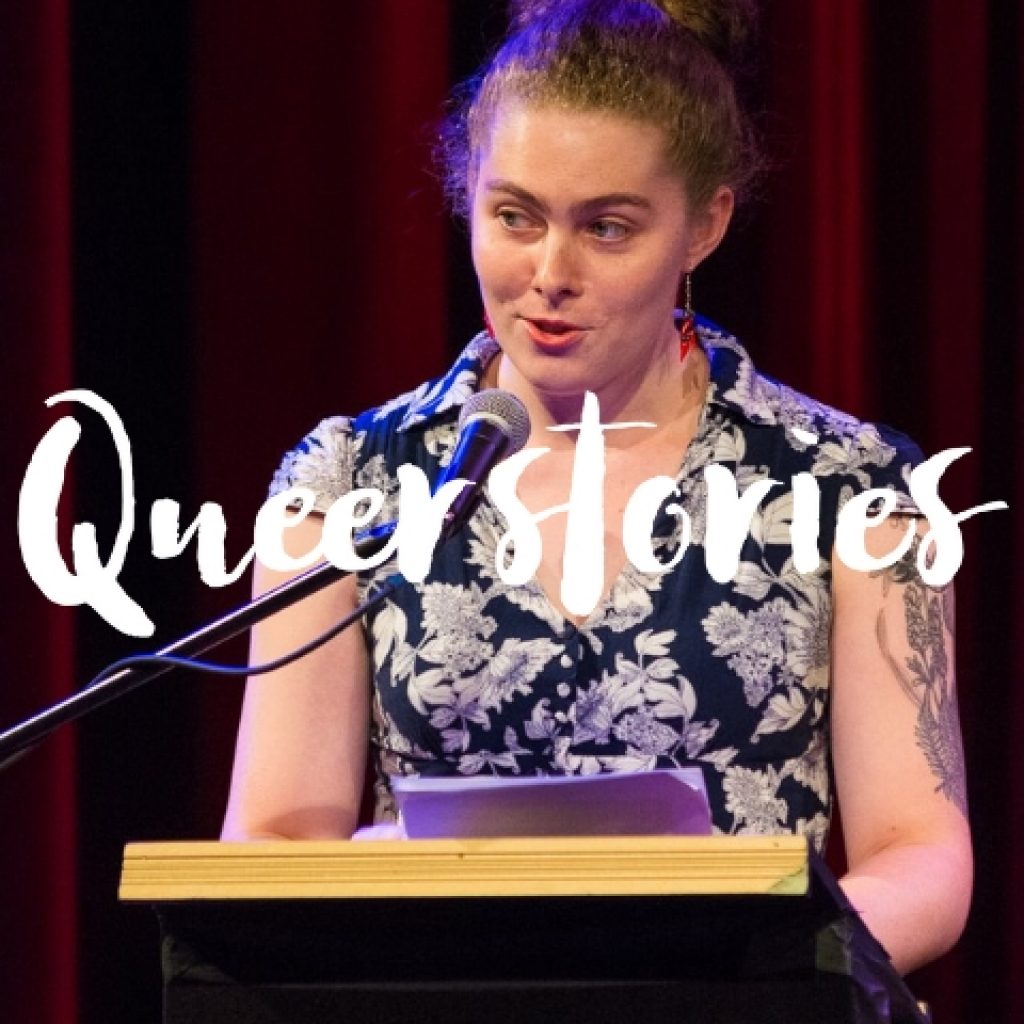 Hi I’m Maeve Marsden and you’re listening to the podcast of Queerstories – an LGBTQI storytelling night hosted at Giant Dwarf in Redfern. This week you are listening to writer, artist and podcaster Liz Duck-Chong.

Hi, I want to tell you a story about gender, and of storytelling itself.

This story takes place when a child is born and given an identity and a set of pronouns. She is brought into a world that won’t understand her for a long time, and that will admonish her.

This story takes place in early primary school, when at the front of a classroom in year two, two children label and name respective caricature genitals on cartoon bodies for the whole class, and there’s no longer any denying that there exists a polarity of being. A young girl sees her body illustrated, beneath the pointed finger of the boy, and knows she isn’t like the others. Many years later, she too points to this as proof.

It takes place at the start of her teens, when her body is first ensnared in the tendrils of testosterone, a landscape beneath her shifting and changing in ways she expected but feared. An undoing of a sense of safety, one that had previously extended up until the point where her body stopped, but now stops far shorter. She starts the descent into uncertainty and vulnerability, her mind as at risk as her body.

It takes place toward the end of high school, talking to doctors about her changing body, her regret, her grief. She mumbles the word transsexual, and seeks a freeing diagnosis; the word torment comes to her mind and her lips. A psychiatrist, at length, grants her a treatment plan. It is black and white. She tells these stories to him just like this, her language is intricate, precise; she describes her body as held back, uncomfortable, traumatic.

Queer is knowing and not knowing. All these stories are real stories, they are my stories, and many others’ without a doubt, but they aren’t the whole story, not yet. As queer people, we’re expected to live certain narratives, fit certain archetypes, and to behave accordingly; when I am the good trans woman, I smile, I show a little cleavage as proof, I struggle to feign excitement on morning tv about Caitlyn Jenner.

But I’m not always the good trans woman – I tell you these stories as part of an unreliable history of me, because queer is as much an identity as it is an unknowableness of self. A constant analysis. My narration is only as good as my intentions in speaking are, so let’s continue.

This part of the story, also takes place when a child is born, although maybe the details surrounding this are less important.

It takes place in early primary school, as a young girl is unsure as to why boys don’t get to wear dresses and skirts, but because they look comfortable, not out of some deep yearning. Outside each classroom were marked a boys line and a girls line. It didn’t really make sense. She feels different, but outside an acceptable range of difference, not an either/or, but an additional and, a distinction the first story has no room for. Sometimes she enjoys wearing shorts too, but it’s potentially not about clothing. She forgets about her discomfort for years at a time, and maybe that’s okay.

This story takes place as an early teenager, entering into what will become a first puberty, hormones rushing through her, not pure fear but still confused, concerned as are many others. She isn’t positive about being ‘born in the wrong body’, but yet this body still doesn’t feel right. She finds a Bailey Jay pornography and realises there may be women like her out there.

It takes place toward the end of high school, talking to friends and trusting in them, then sharing with them. She whispers the word transgender in a lighting booth to two girls, sisters except by blood, and they hold her like they would any other girl. In secret they use her name, gift her clothes, do her face, and take her out. There is an increasing amount of light in her life and it forms shades of grey. She tells these stories to them just like this. Her language is looser, still uncomfortable but it sounds so good in the mouths of others.

Again, these stories are real stories, and they are still incomplete, yet now we’re starting to see into their depth. A story, like a memory, isn’t stationary, for it to sit preserved forever would allow us no impermanence, no growth.  We tell stories in order to be known, to know ourselves, and knowing ones self isn’t a process that ends. They alter as we require them to, shifting between the known and the unknown, as you remember new details, or misremember old ones. Or as we diminish or embellish them for a captive audience as we continue on.

This part of the story too takes place when the same child is born, or slightly beforehand, it’s indistinct and irrelevant. Her parents impart a great many hopes and fears onto a growing cluster of cells. One day this child will reject some of these, potentially ones their parents didn’t ever expect, but honestly when has a person ever grown up to perfectly satisfy the expectations of those around them. They find themselves loved, regardless.

It takes place in early primary school, she’s sitting on a table in the playground with a friend. He’s reading the Guinness world book of records and points agape at the record for ‘most number of sex change’ operations performed by one person. He asks, this is like year three, “who’d ever want that?” and she sits and thinks “hey, maybe I would”, but she also wants a lightsaber and an underground bunker and to be a mermaid, and when people point to these experiences as proof she will look back and laugh.

It takes place at the start of her teens, not the contractual raging inferno of fear and transformation but rather just equal parts uncomfortable and curious about the ways bodies can change. She recounts after the fact that she is scared of her body, and how society says it is supposed to have sex, but her reality has far more to do with inclination, with pacing – one day when she’s ready she’ll share her virginity with a friend who touches her face and calls her beautiful. She is diagnosed with depression; she learns the joy of kissing. She is not one story, will never be just one story.

It takes place toward the end of high school, and the labels that escape her mouth in whispers taste almost right, but by know she knows that it will always be a work in progress, an unfolding plot. Her friends call her a mystery, and she laughs knowing full well that as much is unknown to her as to them, but plays it close to her newly budding chest. It takes place as she comes of age, as she takes hold of her body and is determined to call it her own; it takes place inside and then outside of a closet not of her own design, the one she finds the strength to destroy. It takes place in marches and chatrooms and backyards and bedrooms as she reaches out to individuals, and to a community and they reach back with love, creating so much colour in her life. It takes place, constantly, in the known, and in the unknown;

It takes place in a room full of family, as an audience sits and listens, wondering what’s next and she wonders with them, our paths are the same for just this one moment in time. She tells these stories to them, just like this.