AJ Brown and Lisa Freshwater talk about healing the past through renovating a house and affirming gender.

AJ is a landscape designer as well as an admin for a number of online groups including Trans Sydney Pride and Transgender International. Lisa is a co-founder of The Theatre Division. Currently her production of Miracle City is playing at the Sydney Opera House. Together, Lisa and AJ have a fifteen year old son and a boarder collie called Fergus. 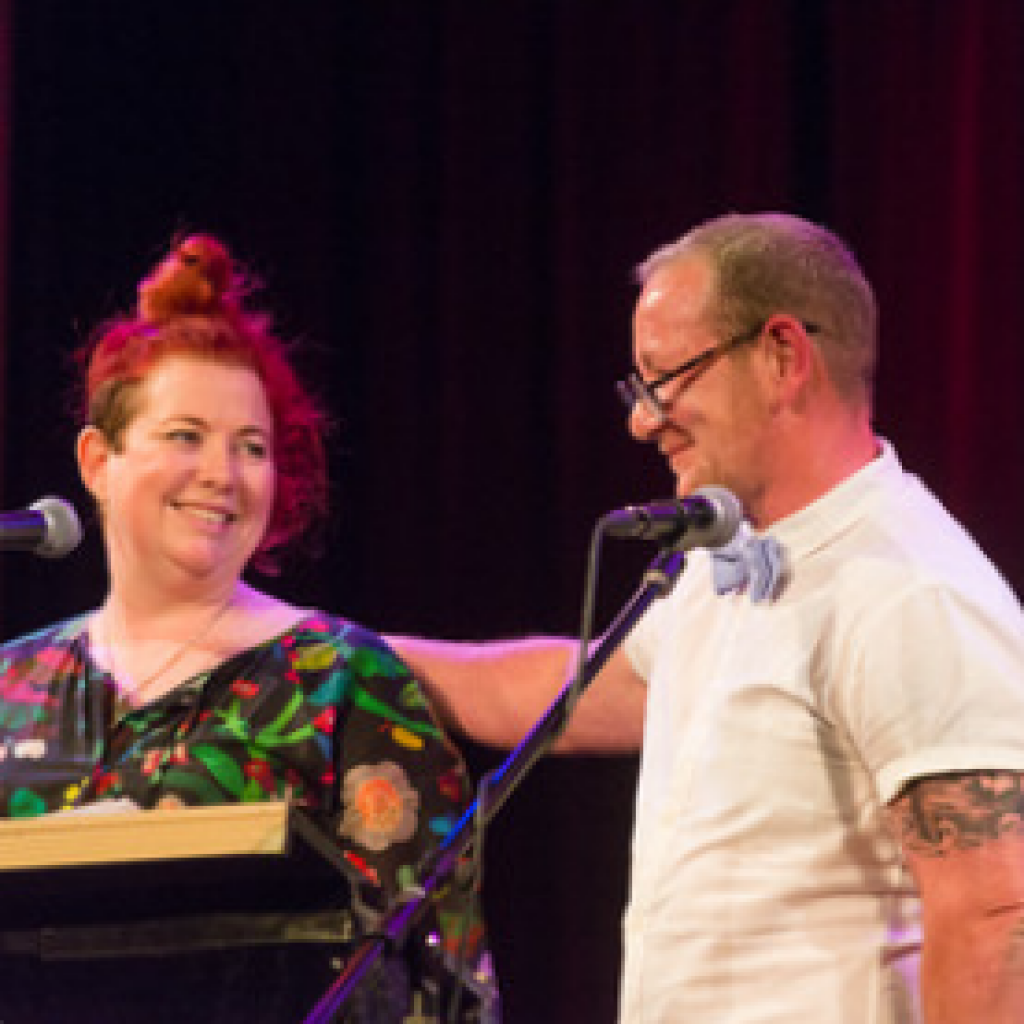 Hi. I’m Maeve Marsden and you’re listening to Queerstories – the podcast for the monthly LGBTQIA storytelling night I host and programme. This week’s story was part of a special event where I invited pairs of queers to share a tale together. Lovers, family, couples, friends. Queerstories Two by Two, celebrating all forms of queer love. Next up – theatre producer Lisa Freshwater and her partner, landscape gardener and trans activist, AJ Brown.

LISA: A few weeks after AJ, which was in 2004 on the only place to meet a lesbian, the Pink Sofa. I was at AJ’s place, a small weatherboard shack that had limited furniture and was fully lit by lava lamps.

The kitchen tap dripped, which I found absolutely unbearable, so he got out some tools and we set about fixing it. I found this capable, hands-on, butch act very, very attractive. As I held the tap and AJ used the wrench to release the valve…

..we lent in and we looked into each other’s eyes, and time stood still and he said…

AJ: “We could build a house together.”

LISA: In true lesbian style, within a few months we were living together in his small weatherboard shack, with a little bit more furniture and not a lava lamp in sight. I sold my semi in Newtown and we started looking for a house to renovate. I’ve always been a sucker for mid-century architecture. Who in their right mind isn’t, right? And so, we found this kind of very rundown late ’60s single-storey house with a skillion roof and large windows that looked out onto the garden from each room. It was set right at the back of the big block in Berowra, across the road from the bush, which is about an hour north of Sydney on the cusp of the Hawkesbury River. It sounds beautifully romantic. The only problem was, the windows were all cracked and boarded up, the garden was out of control, all the timber was rotten, the cork floors were sinking, and everything… I mean everything.. was mission brown. The house was broken, but that doesn’t worry us because so were we.

AJ: Up until the age of four, I regularly sported a cotton wool beard and would go to the toilet trying to stand up. Around this time, I was sexually abused by two different neighbours. I found solace in a fantasy world of Action Man, of heroes like Errol Flynn, and Johnny Weissmuller, and Sean Connery, who kind of, looking back now, were all ladies’ men. Elvis and I had a special bond. I would fantasize that I was Elvis in a hospital bed and that the nurses would give me a sponge bath and kiss me all over.

AJ: As I reached puberty and my body started to change, I became very, very, naughty. And, once, in needlework class, I waited till Mrs Pickanickle was bending over, and I stuck a darning needle in her bottom.

AJ: To punish me, my father, who had recently found God through the Pentecostal church, would use his cut-throat razor and shave my head. I was made to go to my conservative grammar school with a buzz cut. This was absolutely meant to humiliate me but, the irony was, I loved it. My hair was short and I might be mistaken for a boy.

LISA: I was a drama school student in the early ’90s, and I met a cis bi guy, who I fell in love with. About six years into the relationship, we got married, bought a house, and I fell pregnant. We were like the textbook successful couple, but at the time, I could see something was wrong, and he was kind of shutting down. I avoided my instincts and became very, very focused on setting up my perfect life. He had a well-paying job, we’d had a substantial inheritance, and I could focus on creating theatre and nurturing the child that I was carrying.

Life was pretty perfect until one night when I was six months pregnant and he didn’t come home. It’s interesting when a loved one goes missing. People around you are frustrated. They want you to do something. They want you to look, they want to know what happened. But, in my gut, I knew he was gone. This was confirmed when I discovered that he’d cleaned out our bank accounts, taken the car, and $30,000 was missing from the safe at work.

AJ: When I arrived in Australia in 1989, I met my first lesbian partner. I loved her like you love your first, and would do anything she said. She introduced me to the sex industry and I happily followed. I fucked, and she took the money. I started using speed and ecstasy. I became a fantasy mistress who wore leather and latex, and when I dress like this, I always felt like I was in drag. By the time I was in my early 30s, I was hollow and this body had become a carcass that I’d exchanged for money.
When I met Lisa, I’d already decided to change things and had started studying horticulture and landscape construction at TAFE. I was still hooking for money, and I told her about my lifestyle within the first couple of dates.

LISA: My trust in people was completely exhausted, but I thought if he’s going to be so transparent, knowing this could easily be a deal-breaker for me, well, maybe he was the person that I could trust. We settled into Berowra house, my two-and-a-half-year-old son, AJ’s two dogs and four cats…

..and we became a family. And this became our healing project, which we worked on for the next 10 years. We weren’t the only gays in the village but we were pretty close to it.

AJ: I ripped the house apart and I put it back together again.

LISA: Our house and our life had a new foundation.

AJ: Lisa made me paint the house three times in different shades of charcoal-

..until she finally settled on black. She’s very specific about colour; even our sex toys are colour-matching.

LISA: Two years ago, AJ announced that he wasn’t going to die in this old woman’s body, and he was going to medically transition.

AJ: I started hormones, had my breasts removed, and I invested in a vacuum pump for my ever-growing member.

LISA: This was the best decision of his life, but I was no longer part of the LGBTQI community. I kind of was feeling like my identity had been erased. I was becoming a suburban housewife with a teenage son, a four-wheel-drive, living in the suburbs with a husband.

AJ: And she hated it.

LISA: So, we sold our house, we moved back to Newtown, and we now have the most wonderful life and beautiful group of queer friends, and now we finally feel like we’re home.

we want to
hear from you!