Krissy Kneen: Catastrophist with a K

A trip to the ‘homeland’ of Slovenia teaches Krissy Kneen a thing or two about how cultures, individual families and individuals deal with trauma in such very different ways.

Krissy Kneen is an award-winning writer and a beloved member of the Australian literary community. She has written memoir, poetry and fiction, and her latest novel, An Uncertain Grace, was shortlisted for the 2018 Stella Prize. Her other work includes Affection,Steeplechase, Triptych and The Adventures of Holly White and the Incredible Sex Machine. 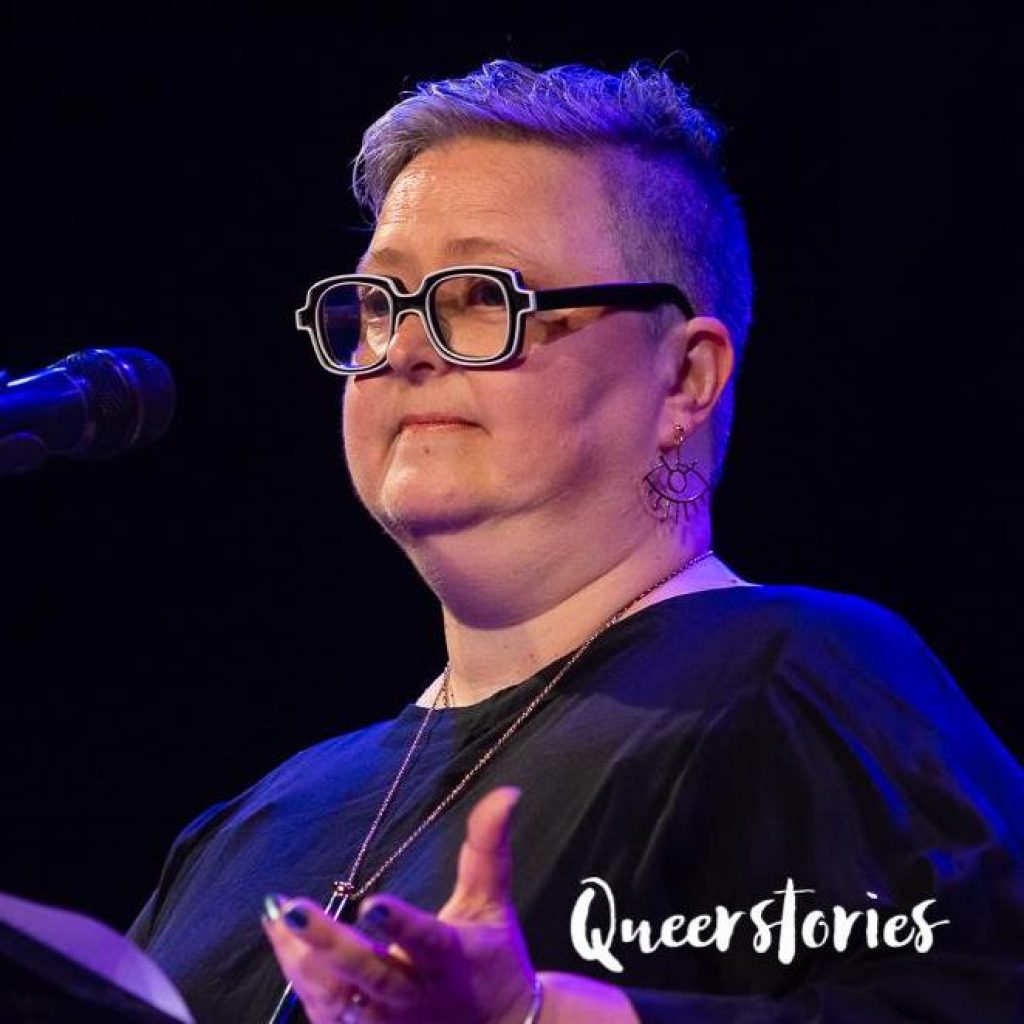 Krissy Kneen is an award-winning writer and a beloved member of the Australian literary community. She has written memoir, poetry, and fiction. An Uncertain Grace, one of her recent novels, was shortlisted for the 2018 Stella Prize. And her latest novel, Wintering, is out now. Check it out.

I’ve had a bit of a year, and I’m really glad that this is our Chosen Family Christmas, because I spent the year trying to track my own family, and it has been a monster of a year. I’m going to read a little bit of some of the stuff that I have done this year, and some of the stuff that I’ve learned about my family because I was never told anything about my background and my family, so I’ve been on a bit of an overseas journey this year.

A few months ago I was in Ljubljana, the capital of Slovenia, the country I have always thought of as my homeland. My grandmother who raised me was Slovene, although she moved to Egypt where she met and married a local man, and there my mother was born.

My grandmother never wanted me to visit her homeland and it took me almost fifty years to get up the guts to disobey her. And then, I only did it when she was good and dead.

I stayed in Ljubljana for three months. It’s a city ripped out of a Disney animation. The buildings stretch up towards the gorgeously blue sky, the castle looms above, squatting on its hill, protective, constant.

I find my place here, my writing place, the best fish restaurant, the queer café with the cute waiter, and she even flirts with me til my boyfriend joins me. Sometimes, I feel like I should get a tee-shirt with “bisexual” written on it, just so women won’t think twice about flirting with me.  Only in Slovene language, it would be “biseksualec.” I looked it up on Google Translate. Biseksualec…. I’ve ordered the shirt for the next time I go.

On this day, when I pass the honey shop and the shop that sells salt from Piran, I pause. There are cars in the pedestrian zone, firetrucks, police. The whole square outside the town hall is taped off. Police tape is the same in any language. It’s clear something is wrong. I stop. I watch.

Tourists don’t seem to notice. They push past the tape, frustrated by this minor inconvenience. They walk, oblivious, into the shops next door. Something’s wrong. There are locals stopping beside me. “Bombe” says one, and I don’t need Google Translate for this one.

I skirt the police tape, warily. I wonder if I should duck down a side street, put more distance between myself and a potential threat. I wonder why I seem more concerned than the Japanese tour group, pushing casually into the gift shop across the square just next door to the City Hall.

I imagine the City Hall exploding. It is solid rock, an old building. The rock might shatter, boulders raining down across the open spaces. Glass, nails, splinters of wood thumping into skin, splitting bone.

A catastrophist. That’s Katastrophist in Slovene. Here that? No difference. Just swap the C out for a K.

When we were kids, my sister and I were under constant surveillance. Our grandmother watched us, taught us to watch out for danger. We learned that the backfire of a car might be a lone gunman. We learned that if you didn’t hook your leg around your handbag when sitting at a café, someone might steal it. Climbing a tree would lead to a fall. Eating at a restaurant? Food poisoning.  It’s learned behaviour: Catastrophism with a K.

One day I let go of my grandmother’s hand in a shopping centre, and she let me think I was lost for twenty minutes. Twenty minutes.

*Imitates grandmother’s Slovene accent* “There. You see? You see what happens when you let go of my hand? Someone could steal you, snatch you. Hold my hand, you must!”

My grandmother had a very particular style of parenting. I remember my mother telling me about her own childhood. My mother had a habit of biting down on her glasses when she drank from them, so my grandmother got the best delicate glasses down from the top of the cupboard. She filled one up with milk. My mother loved those glasses; the prettiest things in the house. My grandmother made her drink. Her teeth came down, the glass shattered in her mouth and the milk was spilled. My grandmother didn’t stop at one glass. She took all of the beautiful glasses and filled each one with milk. My mother bit down, broke another, and another with her mouth. She broke almost every last one of those glasses. But eventually, she learned. I was horrified. How could a mother do that to her own child?

There were subtle lessons too. There was the way my grandmother stood taller, stiffer, more dangerous looking whenever a man passed. Men: They were everywhere.

My sister and I both grew up in the same constrained environment, the same tough love. We were both watched from the moment we woke to the moment we went back to bed. Our correspondence was monitored, letters opened. We were not allowed to spend time alone with our own father. We were kept safe within the limits of our home. Yet, in this same strangely restricted environment, we grew in separate ways.

I visited my sister; both of us adults, both of us grown in such separate directions. “I don’t remember much about our childhood, I said to her.” And she said, “I remember everything.”

I read about the effects of trauma on individuals: PTSD. It is something that my sister is being treated for. In response to a traumatic event, the body clicks into a heightened kind of awareness, a flight or fight response. It is a state necessary for self-preservation but it has some unwanted side effects. The traumatic event becomes heightened in memory. A person is haunted by it. Flashes of the event invade their daily life. Nightmares relive the event even in sleep.  The moment of trauma becomes inescapable, repeated over and over in the victim’s mind.

My sister’s traumas were compounded by events in adulthood, but still, as a teenager, it was clear there was something very wrong.

Because my grandmother was so frightened of men, we were kept at home every evening and every weekend. “In case your friends have fathers, brothers: Men! You can’t be exposed to men!”

We had parallel lives, and yet we dealt with those things in such different ways. I painted scary pictures, I wrote horror stories, I shared them with my best friend at school. My sister became hardened, angry, dangerous, sunk silent and brooding into herself.

On this recent trip to Slovenia, I found that it is possible that my grandmother was the product of a rape. Certainly her aunt was raped by soldiers passing through the village. Her family was poor and had no food to give the soldiers, so they took the women and the girls instead. The two sisters went into labour only a few weeks apart. The babies looked identical, “Like twins,” my Slovene family told me. It was a common story, the rapes. Most of the women in the villages were raped at one time or another.

And how do villages deal with trauma? How do whole cities? Countries? Do some countries bunker down, close their borders, become hard with anger and remembering? Do some countries forget? Do others tell and retell the story? Find peace in sharing it? Become safer, more welcoming places to live?

Here at the City Hall in Ljubljana, the locals and tourists are still huddled around the police tape. People are still discussing whether the disturbance is caused by the bomb.

I hurry on, but the city looks different now. The Disney veneer has been ripped away. I wonder how this city survived the wars intact. No bombing, no damage when so many other cities have been decimated. What was sacrificed for this perfect preservation of architecture? I can’t see the scars of the trauma but surely they are there on the people because they were there on my grandmother. That’s why she refused to hug her children; because we might feel those scars. I feel the scars burning under my own skin as I walk quickly away from the City Hall, expecting to feel the shrapnel hit my back at any moment.

Catastrophist with a C but also with a K.