Kirsty Webeck tells us how a trip to Peru changed the way she sees the world.

Kirsty is a Melbourne-based stand up comedian. She has notably performed in the Melbourne International Comedy Festival, Adelaide Fringe Festival, hosted The GLORIAs at NSW Parliament House and performed at Mardi Gras. Kirsty is currently touring her 2018 festival show, ‘I Get It Now!,’ 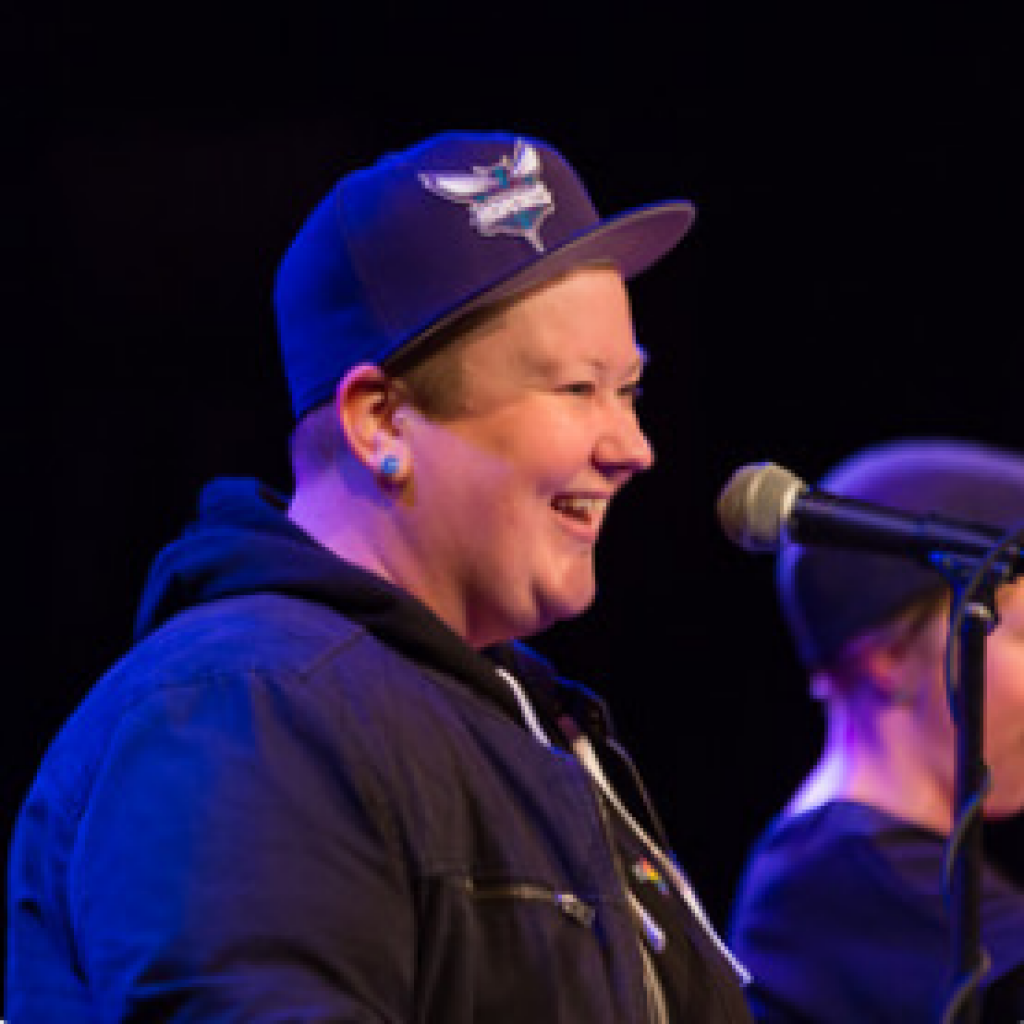 Hi. I’m Maeve Marsden and you’re listening to Queerstories – the podcast for the monthly LGBTQIA storytelling night I run at Giant Dwarf in Redfern, with support from the City of Sydney. This week – comedian Kirsty Webeck.

I’m actually going to tell you a story tonight that changed my whole outlook on life. It’s actually not funny. I think it’s beautiful, but I’ll let you be the judge of that. When I finished uni, I moved to Taiwan to study Mandarin. I’d just finished studying Public Relations and decided to head in a new direction, because I thought it would be funny if I spoke Mandarin. Like, what?

The wonders of youthful arrogance, right? Studying Mandarin for a gag is a really long game. In hindsight, I should have just bought a whoopie cushion.

In my defence though, to this very day, native Mandarin speakers do genuinely laugh in disbelief when I speak Mandarin to them, so I wasn’t actually wrong after all.

My plan was to go for a year, but I extended because I was enjoying my new contradictory island home, the freedoms it offered and my daily motorcycle crashes. It was a running joke that if you couldn’t find me, I’d be lying underneath my scooter in a busy intersection somewhere. It was truth in jest. We’re allowed to laugh now because I’m okay. In my second year in Taiwan, I fell in love. Not relevant, just boasting. Just wanted you to know I’ve got some things going on.

Now, to absolutely blow the U-Haul stereotype out of the water, I settled down with my housemate. What a genius. What a genius. There were no gags about moving in after the second date, because we’d already done it. It’s the best way to do things, I promise.

During my second year in Taiwan, or as my friend from New Zealand called it, “The Land of the Long Brown Cloud,” very accurate, my partner and I decided to go travelling. We went to The UK to see her family and then we went travelling in South America for three months. We flew into Lima, Peru, and booked to fly out of Rio three months later. The only activity we had organised in advance was the Hike from Hell. I mean, “The Inca Trail.”

I enjoyed that one too. It turns out that completing the Inca Trail actually requires more structured training than drinking your body weight in alcohol every night. Nevertheless, I completed it, barely able to walk and dehydrated from releasing all of the water from my body through my tear ducts. That is actually true, on the fourth day, my partner turned around to say to me, “Oh, my God, you haven’t cried today.” And, caught me just as the first tears started to roll down.”

Aside from The Inca Trail, we knew we wanted to do some volunteer work. It was the hip thing to do back then. I have a lot of cognitive dissonance now around the concept of voluntourism, but, yeah, I’ll save that for a TED Talk. We can’t do it all today.

Just before we landed in Peru, a massive earthquake measuring 8.0 on the Richter Scale struck Pisco on the central coast. The earthquake lasted for three minutes. Now, If you’ve ever been in an earthquake, you’ll know that three minutes feels like three hours. According to the government, 519 people died.

An American organisation, All Hands Disaster Relief, put a call out for volunteers to mobilise and help the local community rebuild. We were on it. With enthusiasm, the intensity of a thousand suns, we made our way down the coast from Lima and we spent a night in Paracas, a neighbouring coastal town, while we waited to receive instructions from All Hands.

The hostel we stayed in was partially destroyed by the earthquake. We’d just settled in to go to sleep when the earth started shaking. We jumped up and got into the doorway, while tourists frantically scrambled around in the corridors. We moved everyone to safety and calmed them down, as we were seasoned experts on earthquakes. We actually were because Taiwan is basically one very large fault line. Every day, you feel the earth shake in Taiwan, and if you don’t, you’re worried that you’re not still alive. Now, that aftershock in Paracas, it measured 5.9 on the Richter scale, which, in itself, is a large earthquake.

The following day, we headed into Pisco and were met with about 100 travellers from all over the world, living together, and working in teams to help the local people rebuild. I took a shining to the demolition crews, and quickly found myself spending eight hours a day in the blazing sun, dismantling the remnants of structures and clearing the debris onto the streets, so that temporary housing could be built on people’s land. Hashtag Butch.

The organisation was run like a well-oiled machine and relied solely on the labour of volunteers. There was no financial contribution required, your willingness to work hard was literally the only selection criteria. We were provided three meals a day, a roof over our heads, and all of the necessary tools to fulfil our jobs. Locals were employed and paid to assist in anyway required. Local handymen were hired to help ensure the integrity of the structures that we were accommodated in. Bunk beds were hired from local hostels that were destroyed, local people were hired to cook the meals each day. All Hands is super concerned with the idea of pushing money back into fractured economies in the aftermath of natural disasters.

A few days into our stay in Pisco, I became a rubbling crew team leader. Humble brag. I suspect it had a lot to do with the songs that I had my teams singing each day in broken Spanish to assist us in learning the language and to keep up our morale. “No mas trabajando, por favor. Mas cerveza, por favor,” or “No more work, please. More beer, please…” That was probably my finest work and went on to be a regional hit.

One day, my team and I went out to finish bringing down a house that we’d started working on two days earlier. There were three of us. We took our wheelbarrow full of tools down the road, happily chatting away, and set to work in the blazing sun. The voluntary engineers had come by the afternoon before and worded us up on how to get the remaining walls down safely. We set to work with our sledgehammers and before long we were ready for a break.

We laid down in a bit of shade, drinking water and having a giggle about the events around the campfire the night before. Before long, a local man came up to us. He sat down with us, dishevelled and heartbroken. He carried the world’s sadness in his eyes. He started explaining to us that a few metres from where we sat, his family home had come down in the earthquake. His sister had died in an armchair while watching television. We were all at a point with our Spanish language skills where our comprehension was fairly good, but we had trouble articulating what we wanted to say in return. So, rather than repeatedly saying, “No bueno,” we decided to sit in silence. We sat there and we took turns holding his hand when he offered it to us, and we cried with him.

After a while, he produced a dusty, hot longneck of dark beer that he’d had sitting next to him. He explained that it was one of the only things that he’d managed to salvage from the rubble that his family home had become. He wanted to give it to us as an expression of gratitude because we had come to his city to help them rebuild.

To say it was the most humbling experience of my lifetime is a dramatic understatement. What a complex range of emotions and thoughts were produced by one action. On the one hand, I was so happy to see that we were genuinely making a difference, on the other hand I had never felt such a strong sense of my own privilege before. We were on holidays. We could leave at any time and go back to our regular lives. This was the only reality in that moment for that gentleman and the other citizens of Pisco.

We knew enough about Peruvian hospitality to know we couldn’t refuse the bottle of beer, so we went across the street and bought some plastic cups from a savvy entrepreneur who had turned the remains of their lounge room into a convenience store and we poured his beer into four glasses. We toasted to him, his sister, Pisco rebuilding, and life, and we sat in silence drinking our warm, dark beer at 10 o’clock in the morning, all one million miles away in our thoughts.