From dagger dykes to dapper daddies – butch history from the perspective of a masculine of centre millennial.

Kait Fenwick is a queer poet living in Newcastle. In 2017, they completed their Honours thesis titled ‘Digital Queeries’, a series of poems that explored the relationship between millennial queers and the internet. Their work has been published in the Contemporary Australian Feminist Poetry anthology, Butch Is Not a Dirty Word magazine, Archer and Cordite Poetry Review. 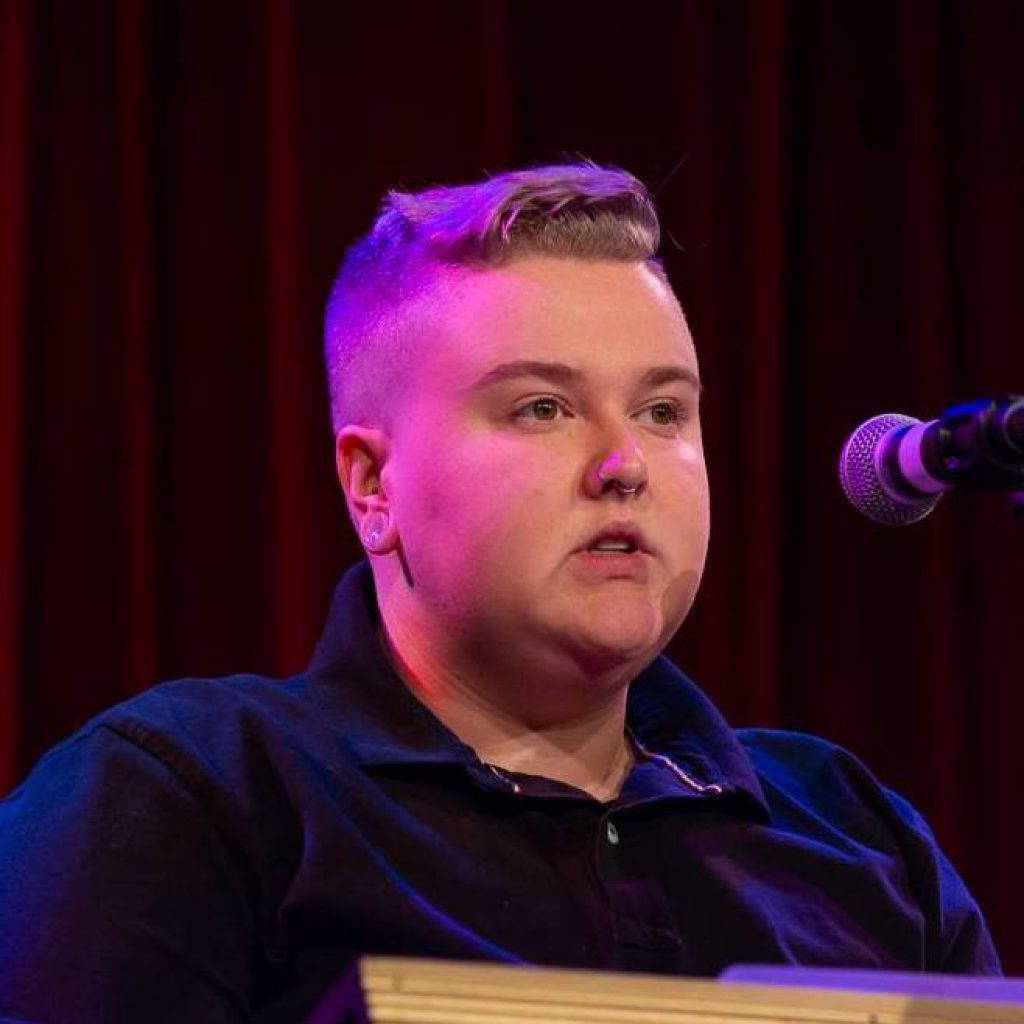 Kait Fenwick is a queer poet living in Newcastle. In 2017, they completed their Honours thesis titled Digital Queeries, a series of poems that explored the relationship between millennial queers and the internet. Their work has been published widely, and a version of this piece appeared in Issue Ten of Archer Magazine, which was launched at Queerstories in Sydney in August.

Before I share my story tonight, I’d like to acknowledge that it was written on country belonging to the Awabakal and Worimi peoples.

Not unlike the sleeves of a t-shirt repurposed into a muscle singlet, butch lineage is often discarded. A cog in a seemly much larger LGBTQIA* wheel, butch history is seldom tracked. It sits calmly in the corner of a quiet pub, a schooner in one hand and a cigarette in the other. It swaps stories with a syntax that is so uniquely butch, in a manner that slides within the folds of forgotten handkerchiefs and crinkled love letters.

My initial encounters with butch weren’t visions of beautiful, polished women in perfectly tailored suits. The building blocks of my narrative are stereotype butch. Butch that isn’t diverse. Butch that is pepped with toxic masculinity. I grew up in Newcastle, a working class heartland with roots in alcoholism and steel. The trajectory that butch women followed in my town was one of poorly fitting stubbies, chain smoking, and bad ‘90s tribal tattooing.

I cringe looking back on my desperation to love my body in floral dresses as a young teenager, and my abject desire to reject the masculine aspects of myself for fear of falling into those tried and true patterns of existence. And, at my core, I’ve always been a butch person attracted to butch people.

That dynamic wasn’t something I had ever encountered, I really believed in the troupe that butch

identifying people sought a femme, and that wasn’t me. I tried over and over again to fit that paradigm, the box that was so distinctively carved sometime, somewhere in our queer history.

And then, I met Jess, an androgynous ball of love who fit against the curve of my back in the foetal position like a missing piece of a jigsaw puzzle. My heart was full. My mind finally understood what it meant to have your identity align with the person you choose to share the twists and turns of life with, and a hand to hold when the same boring questions arise in regards to who wears the pants.

And the thing is, Butch is diverse, transgressive, and sometimes transgender. We can learn this through looking back at trans-cending butch pillars, most notably activist and author Leslie Feinberg. Stone Butch Blues is the equivalent of a holy text to many a butch identifying person because it paints a multifaceted image of butch existence. It delves into the complexities of butch in plain, accessible language. It explores gender ambiguity, presentation and representation in ways that allow for discourse to flow in between and outside the lines. Never had there been a text written outside the binary that was inclusive of anyone who dared to flip its pages.

Like Feinberg, queer poet Eileen Myles who speaks to the intersection of butch and trans existence, articulating to the rest of us the way in which both identities collide and marble, creating a force to be reckoned with. Myles’ work challenges what we know as butches about butchness, and what a butch looks likes when transcribed into trans modes of being. They write, “I’m happy complicating what being a woman, a dyke, is. I’m the gender of Eileen.” And from that work, we know that the complication isn’t a design flaw, nor is it an identity placed upon them, but rather one that’s been created through trial and error, through butch expression that’s moved into uncharted spaces.

in which clothing, like the words we use to describe ourselves, act as identifiers. Myles describes a beat up old t-shirt from Banana Republic as being a signifier of comfort – both physically and metaphorically – stating, “I feel like the world is in place.”

It is not uncommon for butch and masculine-of-centre people to cling to clothing that makes them feel most like themselves. Butch history has a disjointed timeline, generally, and when it comes to fashion. However, there are certain elements of the quintessential butch wardrobe that never go out of style.

But, how does all this relate to our history? It relates because what one elects to put on their body as they move through the world is deliberate, and through this deliberation we weave our own language. This language communicates between us – a black banana in a back pocket, a pair of doc martens, a carabiner fastened to a belt loop, and a deliciously fitting binder – and these signifiers are sign posts which create points of reference in our communal history.

Activist Auntie Kate Bornstein has affectionately referred to these garments as “dyke wear”. That black bandana two decades ago acted as a cue; a suggestion that the wearer was queer and into S&M. However, through our contemporary context that meaning has shifted due to increased visibility.

Bondage paraphernalia has moved into public consciousness, and we no longer rely on these articles of clothing as a form of secret code, rather, a tokenistic expression of our queerness.

It would be naïve of me to suggest that, historically, butch and androgynous fashion hasn’t mimicked one another, or perhaps even that they aren’t one and the same in many instances. Mainstream media leads us to believe that butch looks like Lea DeLaria  – said with love and affection – or Shane McCutcheon -said with love and affection – however, part of reconstructing our visual history must include the diversity of butch. Butch that’s fat, butch that’s brown, butch that’s checkered with stretch marks and varicose veins, butch that’s young, or old, or disabled, butch that’s femme, and femme that’s butch, and butch that is entirely masculine, complete with top surgery, a perfectly proportionate packer tucked into a pair of RodeoHs.

In 1994, photographer Catherine Opie came into cultural consciousness with a series of portraits exploring the Los Angeles leather dyke community, butch identity and the self, and then again ten years later in 2004. The 2004 series saw Opie capture a different facet of butch. These images revealed a softness within butch identities, allowing for the first time glimpses into a butch vulnerability, and reminding the community that softness and butchness are not mutually exclusive.

And then, some years later in 2018, parenthood and butchness that is scarcely seen within the same frame was revealed. Through documenting our people, Opie’s images craft a visual history in a way that isn’t necessarily performative. Masculine maternalism is showcased through a photograph, titled Self Portrait/Nursing, depicting a cropped hair, tattooed Opie chest feeding a hungry child. This image is a potent because it reconfigures what butch looks like.

Tracking Butch is about writing down our nuances; aspects of ourselves and our community that have long been shelved as unimportant or not worthy of documentation. This minimal attention to detail is what has lead to a lack of tangible history. It is history that we can pick up, put down again, shake, rattle, question and challenge. There’s no frame work at present for redefinition and reclamation beyond what we have, because other people have documented it for us. Our patchwork is a poorly tattooed symbol of Venus on a forearm, a home-job buzz cut on a middle aged dyke, and wardrobes full of colour-coordinated plaid. It is also genderless, breastfeeding, transgender and transcending. To be butch is to be all encompassed. I don’t know that one dips their toe into butch, for it is rather a state of becoming.