Joy Ng opened The Bearded Tit 4 years ago with two friends as a place for the Redfern, artistic and queer community to congregate, experiment and dance together. Her investment in diversifying and creating space for Sydney’s alternative nightlife sees her also sit on the City of Sydney’s new Nightlife and Culture Advisory Panel. 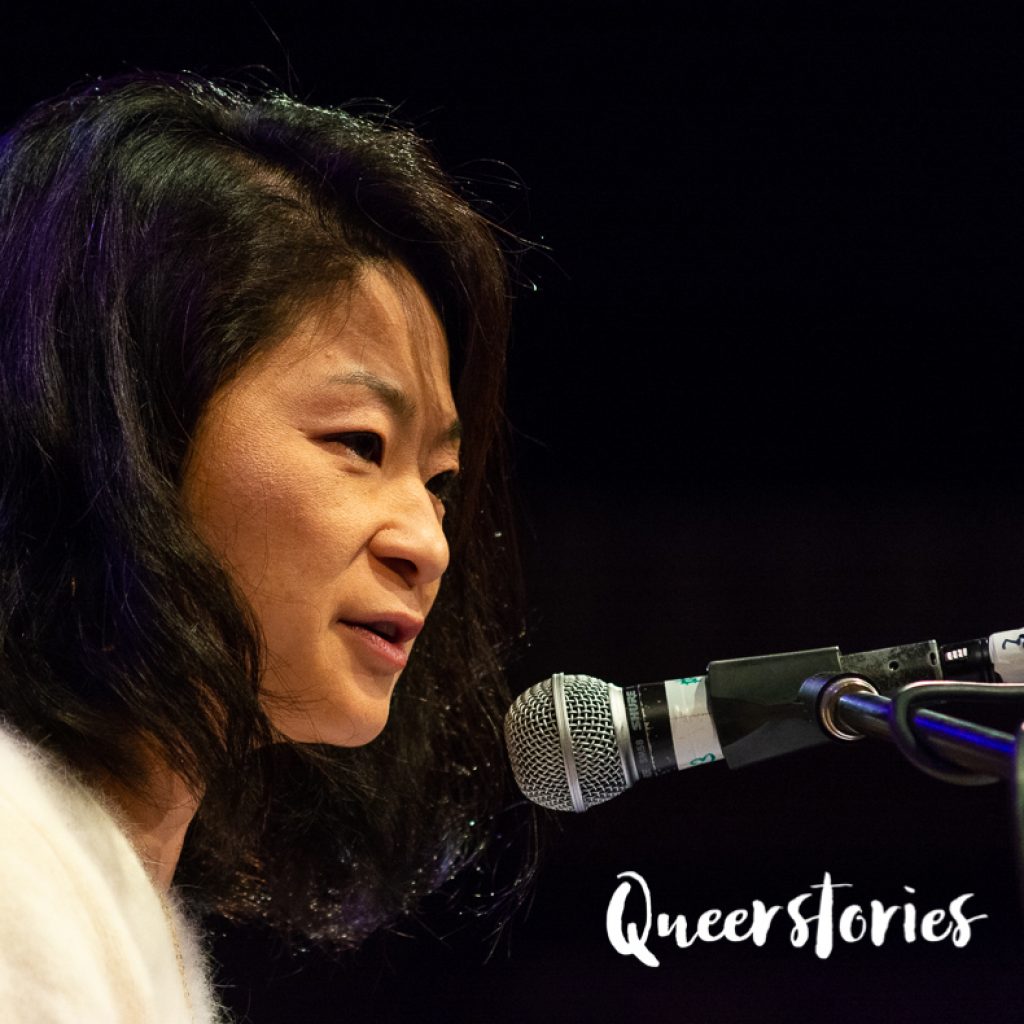 Joy Ng opened The Bearded Tit four years ago with two friends as a place for the Redfern, artistic, and queer community to congregate, experiment, and dance together. Her investment in diversifying and creating space for Sydney’s alternative nightlife sees her sit on the City of Sydney’s new Nightlife and Culture Advisory Panel.

My story tonight is about baby boomers and Facebook. We’ve all heard of adult children laughing as their parents struggle with how social media works. Their clumsiness with the platform is often funny and endearing. For example, a friend told me recently how her mum’s FB page is just her posting photos of the flowers in her garden, and each photo has only one ‘Like’ and it’s her mum liking the photos.

She just didn’t understand why you don’t need to ‘Like’ the photos you post yourself. It’s kind of cute.

Now, the boomers I’m specifically talking about are actually my parents, and more specifically my father and how his decision, at 71 years old, to open a Facebook account changed all of our lives.

Now a bit about my family: Firstly, my parents are in a polyamorous relationship. My dad has had other families overseas my entire life and my mother has had another partner for the last 28 years. When most people hear about my parent’s unconventional relationship, they think, “Wow. That’s so liberal. It’s so amazing!” But let me tell you, it couldn’t be further from the truth.

Growing up, my father would spend the majority of his time in Malaysia with his primary partner – or Wife One as my siblings and I would like to call her. He will divide his time every month between the two families by spending three weeks with them in Malaysia and one week with us. I still remember my parents explaining to me, when I was about four or five years old, that he had another family overseas but that him and my mum loved each other very much. They explained that his first wife knew about us in Taiwan, but she wasn’t interested in meeting us, which I wasn’t bothered by. And this arrangement continued even after we left Taiwan and immigrated to Adelaide in 1987.

Over the years, my siblings and I would get regular updates about his family in Malaysia. And to be honest, I never really paid much attention. It’s like hearing stories of a distant relative you don’t know, so I never asked any questions and feigned interest when he would tell me about new years dinners or his wife’s work dilemmas. This changed, however, when dad came home one day and told me that we had a step-sister. My siblings and I were so excited. Every time he came home now, we would inundate him with questions like, “How was her first day of Kindy? What subjects did she like at school? Does she still have long hair? What sports does she play?” My dad would read us her school report cards. And when she became a teenager, would express his concerns about the kind of crowd she was hanging out with and how late she was coming home at night.

When it was Christmas time or her birthday, he would often ask me to pick out presents, and that was one of my favourite things to do since I would always buy her things that I knew I would’ve liked at her age.  I would also sometimes ask him how she felt about being an only child since even though his first wife knew about us, my step-sister didn’t. They made it really clear from the beginning that they didn’t want her to know about his unconventional relationship arrangement with my mum. And my dad’s story was always that she loved being an only child because she adored being the centre of attention, and she loved being doted on.

I was never shown a photo of her but I was told that she was very beautiful, and even my mum thought so. I think my parents even asked once if I wanted to see a photo and I said no. I had this image of her in my head that was pieced together by my dad’s stories and the presents that I’d bought her. To me, she was this beautiful, young, graceful, princess-like character, and I just didn’t want to break the illusion.

As I got older, finished school and went to university, my dad would often tell me how different my siblings and I were compared to our step-sister. He never said it outright, but he would insinuate that we were somehow tougher and more resilient than she was. He explained that she was raised differently and in a very different environment and that her delicate sensibilities would be shaken if she knew about us in Australia.

She sounded like this delicate flower that needed to be protected and, even though I understood, part of my young adult self wished my dad felt the same protectiveness over my siblings and myself. I also wanted to feel precious and delicate enough to be worthy of protecting. But then, the sensible part of me would remember how wonderful it felt growing up always knowing the truth about my parents. and for my dad to feel that he could confide in us when he had difficult times at home in Malaysia. That had always made me feel like I was part of the inner circle; like I was an adult.

So, when my father, at 71, which was about eight years ago, he decided to join the world of social media and opened a Facebook account. He did this while he was in Malaysia, so I don’t know who helped him or if they actually explained to him how Facebook worked.

At the time, I was in Adelaide. I went back to Adelaide for a short stint for work, and my younger sister was living in Manchester in the UK, and my older brother was living in Brisbane. I vaguely remember my sister being amused by the whole idea of Dad having a Facebook account, and we laughed about how this could really get interesting.  Now, all my family members are friends with each other on Facebook, and that’s normally how family gossip is circulated. I, however, am not. I prefer to get my family gossip the old-fashioned way – through real-life Chinese whispers.

So, late-night multiple unintelligible phone conversations via multiple unreliable sources, which were often my dear, dear aunties in Taiwan. And these were always one-sided exchanges since I never offered any personal information in return. I’ve never wanted my family to know about my personal life, always fearful of being judged, especially by my beloved aunties.  So, my sister calls me from the UK one day and all she said is, “Joy, she knows. She’s found out and shit has hit the fan!” And my heart stops.

Apparently, my step-sister was going through my dad’s facebook page, and with only 60 friends it didn’t take long before she saw my siblings on my Dad’s list. We all share the same surname, so she probably just assumed that we were distant cousins living in Australia. Of course, a friendship request ensued, and because none of us know what my step-sister looks like or what her name is, both my brother and sister accepted the friendship request without a second thought.

Well, obviously, my step-sister goes through siblings’ photos, and what she saw were family photos of my dad with us, from baby photos, school graduations, family Christmases, and holidays. And I can’t imagine what it would be like to see something like that online when you’re completely unprepared. She must have been completely shocked and confused. I mean, she would’ve thought, “Who is this woman with these three children and these two digs living in suburbia in Australia?”

I did always think that she would find out, but somehow I had imagined that it would be in a more controlled situation, and done in a more respectful way. So then, my step-sister confronts my father and asks, “Who are the people in these photos?” And if he, in fact, has another family in Australia.  My dad admits that he does, and so she demands my siblings’ phone numbers. She calls my sister in the UK and begins to explain who she is, and she is floored again when my sister says, “Oh, yeah. I know who you are.” And then my sister proceeds to ask her how her new job is because…

… at this point, we are still getting regular updates about my step-sister’s life. And as my sister is telling me this over the phone, I just keep thinking, “What a mess.” And I remember being really thankful that my step-sister didn’t have my number. I just wouldn’t have known what to say. Anyway, it didn’t take long before my sister and I organise to meet up with her. The weeks and days leading up to our meeting was some of the most nerve-wracking and exciting time of my life. And, in some ways, I’d been waiting for this for decades. Now, how that first meeting went is actually a whole other story. Thank you.