Johnny Valkyrie – The Magic of Misfortune

Johnny weaves a tale of two cities, and of his queer family history.

Johnny Valkyrie is an activist and educator. He was awarded Young Transgender Person of the Year 2019 by the Queensland Council of LGBTI+ Health. Johnny enjoys florals, galleries and retro knickknacks. 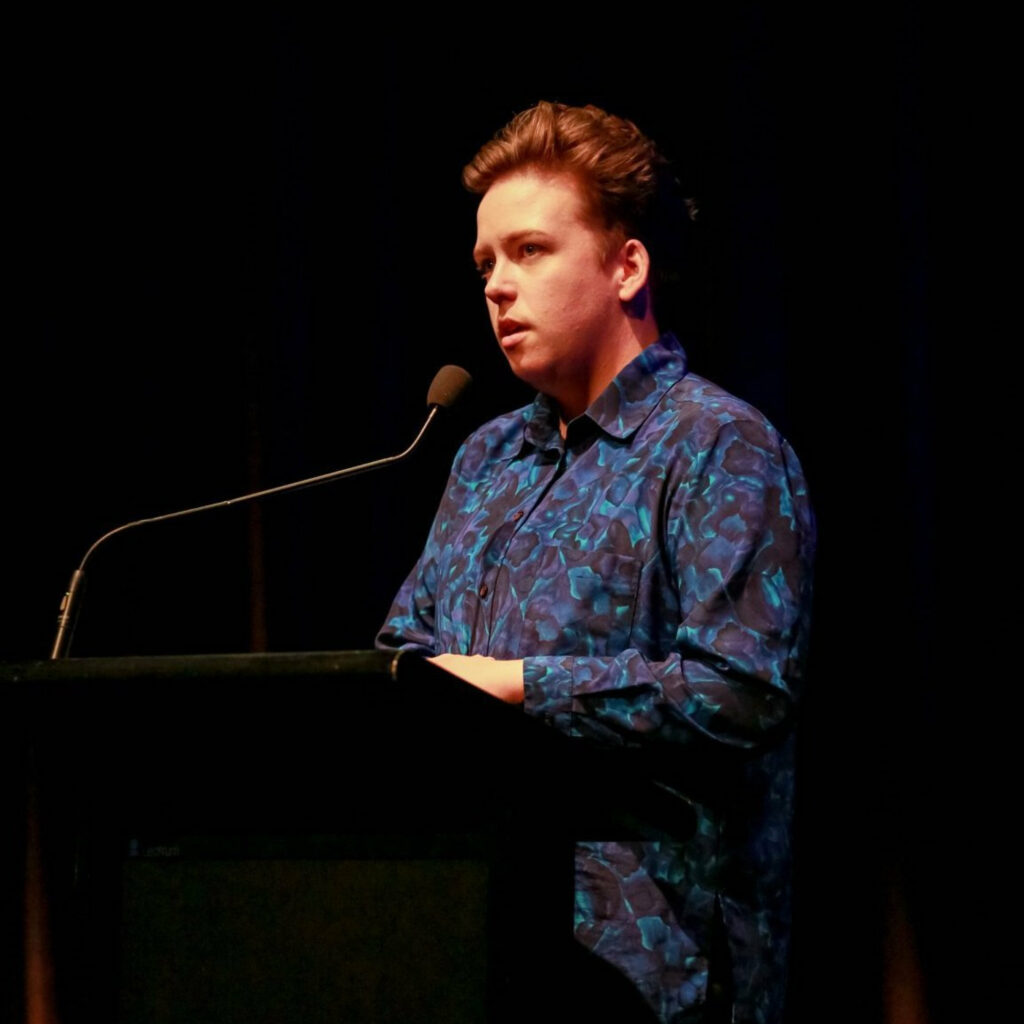 This week, Johnny Valkyrie is an activist and educator. He was awarded Young Transgender Person of the Year 2019 by the Queensland Council of LGBTI+ Health. Johnny enjoys florals, galleries and retro knickknacks and he performed this story at Brisbane Comedy Festival.

I was going to have an absolute Kate Bush, ballroom-dancing breakdown on stage for you tonight but I did that earlier in the comfort of my bedroom.

It has been a week, a year, it’s been a life. So now, if I may, I would like to tell you one of my very queer stories. And my family has its own.

It is March 1996, and my father watches live television from his Newtown apartment in the funky side of Sydney. He tunes in, only to see my mother, marching proudly in the annual Mardi Gras parade.

She is holding high some large, functional cardboard scissors and following her – yes that will make more sense in a minute, my mother is not a lesbian and that’s not what they do either – following her, the banner reads ‘Cut The Red Tape On AIDS Medication’. She was invited to an after party, hosted by the drag queens in the parade that she had glamoured up – straightened their wigs and put glitter on the eyes and so forth. She studied makeup artistry at her technical college after the printing industry replaced both my parents’ professions with Photoshop. That’s right, their careers were sacrificed so we can make photo edits and memes from the comfort of our laptops. Sorry, Mum and Dad.

Mother quickly found demand in the rainbow community for her creativity and found comfort after the loss of her younger brother, Paul, who passed in the same year as Freddie Mercury and by the same means.

Later that night, covered in glitter, a drag queen called Stuart, a friend to this day, offered my Mum a glass of sparkling. She hesitated for a moment. It could have been the heat or the exhaustion, but she declined. Sacrilege, I say, I would’ve had some. The next day she discovered she was pregnant with me.

I was told this story after coming out, and they are here tonight. Hello! [applause]

Yes, many transgender people don’t have that privilege so I just, I’m very lucky in that way.

My family has an interesting queer history. My mother and her brother, some decent – some decent, I’m sure they were decent, distant sorry – you’ll have to excuse me, I do have a visual condition – some distant, secret scholars who never married, and an estranged aunt on my father’s side.

My father was raised in regional Queensland. He admitted to me that he once feared the queers and was sometimes mistaken as one in his youth for his long hair under Joh Bjelke’s tyranny. Oh heaven forbid you’re anything but the Brady Bunch! He lived at odds with this world, an inquisitive, creative person, before settling in Brisbane, selling records when the Dead Kennedys were outlawed, and delving into the underground creative scene of inner Brisbane.

He then moved to Sydney where he met my mother, and this unlikely pair created this equal parts creative, political, queer, quirky, conflicted, identity crisis, argh, you know. We are all beautiful kaleidoscopes of everything that has happened before us, to us, and from us.

My first year in Brisbane has been an interesting one. It’s combined my formative years in Sydney, the now slightly gentrified, toffee-nosed southern capital, and regional Queensland, where teeth are rare and the heat is as oppressive as the politics. Oops, sorry!

The honeymoon phase upon returning to the city lasted until frequently, the buses in my neighbourhood would run late, be cancelled or leave early, all with a 30% rise in ticket price. Here in Queensland, we call this service Translink – more like transphobia.

I was in drag for eighteen years. Unpaid. Can you believe!? I am transgender and homosexual, androgynous, queer. English is difficult, so you can just call me Johnny.

I went to the most prestigious ladies’ college in town, where I could neither relate, nor date. Yikes. The stories I have from that place… When I finally escaped the horror of regional religious gender-segregated private high school – mouthful, wink – that was later in life. Anyway, when I finally escaped, I shaved my head, strapped my Dr. Martens on, and went to the roughest high school in town. Yes, I wanted life and I wanted it badly. And I got it.

The true diversity of the community I lived in was revealed to me. Previously, an artificial purgatory full of trust fund babies and soccer mums, and now, an entire ecosystem. However, there were some predators. I was different so I was an easy target. Dyke, they said. How wrong they were.

Yes, I did reasonably well at passing as female until I was labelled as lesbian by my peers, which was solely based on my appearance. I love women; I want to do their hair, be their friends, not do them, or be them. My father thought it was the KD Lang CD he had passed onto me in my youth. His concern was without judgement too, that is important. He was genuinely interested in the formation of identity, and believed, like most parents, that everything was his fault. The only trouble was, that fault is not something that one should attribute to identity. The only fault is in the way that society treat people of diverse gender and sexuality.

I expect to be fanned and waited on by beautiful gentleman, gentlethems, from the comfort of my chaise longue in an absolutely stunning river-view Teneriffe loft if I may. That’s the dream.

My young life has truly been the tale of two cities – the best of times, the worst of times; I hate myself [laughs] – I lived in queenly Sydney and her outskirts until I was thirteen, and then settled into the north to conservative country Queensland as I said, and I had wonderful and traumatic experiences in both places.

Brisbane is the middle ground I’ve been waiting for. There’s something comfortable I take from living in an emerging world city with plenty of progress required. I have my work in activism cut out for me. With eight planets in Capricorn, it’s hard not to be political, and your queers love astrology, don’t lie to me, we love it.

I felt initially tonight I would have to recount the Drag Storytime saga, the hate crime, the media, but I’m not defined by this event and I want to close that chapter. However, my message is this: that there is joy to be found in the darkest times, in the worst circumstances, in the most inappropriate ways. The Germans call this Schadenfreude, to feel glee at the misfortune of others, without necessarily wishing them harm. There is something cathartic about seeing our own failings, those of the human condition, play out in the lives of others, it means you understand. It means you’re not alone.

Those with dark humour have it because they have seen dark times. When you are in the depths, you feed off joy wherever it can be found and it is the only relief. It is okay to, privately, laugh when diagnosed as terminally ill, to make love after a funeral, to attribute your abusive ex-partner to a historical dictator; to joke about death, loss, tragedy, suffering and grief. We grieve differently, we cope differently, we find humour in strange places. That is the hidden magic of misfortune. If you lace up too tightly, you may just miss it.

We must be sensitive, however. The way I do this is by thinking and saying these things privately, or crying directly into the shower drain, clutching onto an empty bottle of wine while the water drowns out for dramatic effect.

There is more to me than this event and my queerness. I love photography. I love birds and native animals, the landscapes of this beautiful country. I am the family historian, I love documentaries, philosophy, history, world culture, politics, fashion, you name it. I’ve worked in education, creative industries, community service, offices, and more recently, activism. We are whole people but we are inseparable from our queerness. We queer folk have some extraordinarily tragic and beautiful stories and we need to tell more of them. There is so much more than coming out, marriage and civil rights; there is more to the community than cisgender homosexual white men, and there is so much more that they can be because we know the power in those most privileged uplifting those most oppressed, and we need to do this together. The community is changing for the better and unless we unite now, we have no chance.

We need the spaces to talk about ourselves and others. We cannot do this without all of you and I certainly could not have done it without my parents who are here tonight. I am queer, I am alive, and I will survive. Thank you.