Jean comes out – as a fanfic writer. A nostalgic throwback to simpler times, when representation was out of reach and a young writer found fame – and critique – online.

Jean Tong is a Melbourne-based writer. Her previous work includes Hungry Ghosts (Melbourne Theatre Company), Romeo Is Not The Only Fruit (The Coopers Malthouse, MICF), and Anti Hero (Monash Centre for Theatre and Performance). She has also presented at the Emerging Writers’ Festival, and published in Peril Magazine and Meanjin. In 2018, she was selected for Screen Australia’s ‘Developing the Developer’ workshop, and for Film Victoria’s TV and Online Concept lab (Plot Twist). 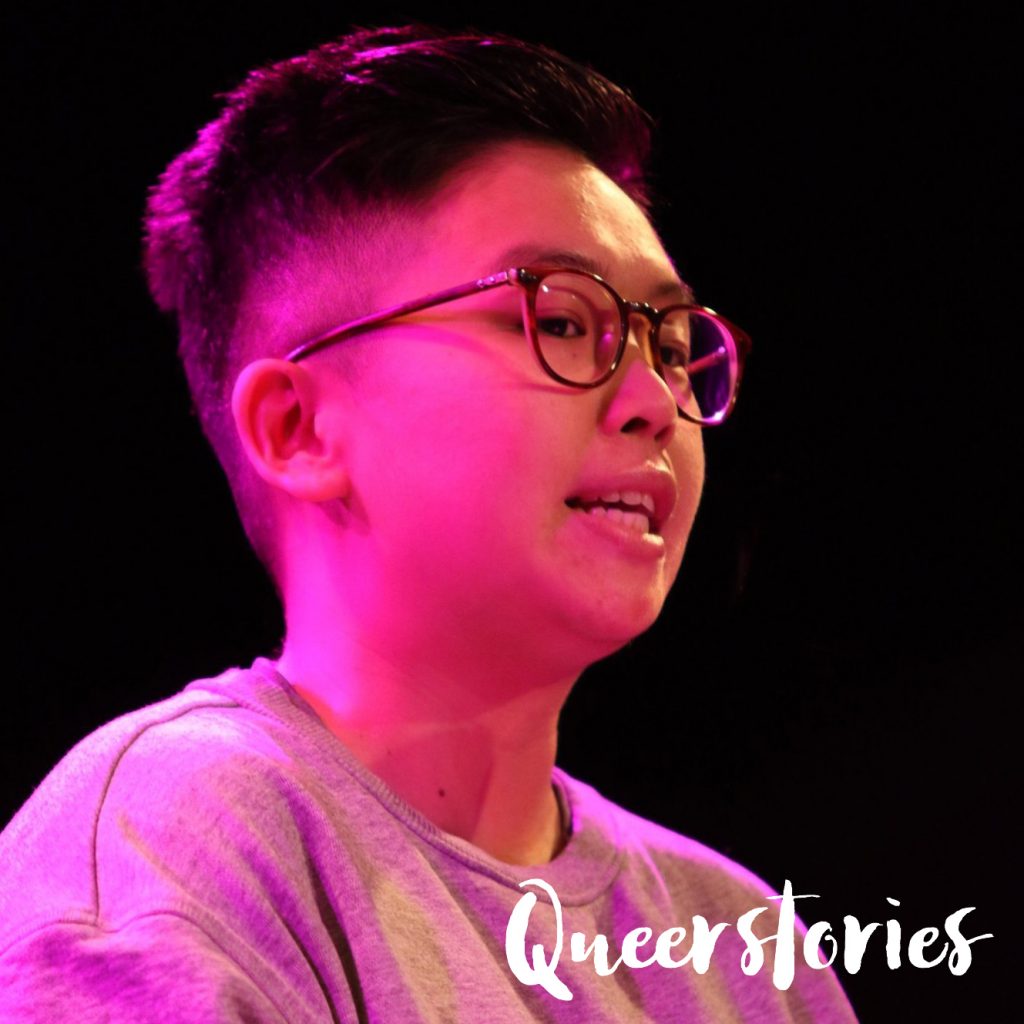 This event is called Queerstories, so I’m making a generalised assumption that many of you at least vaguely understand what all these words mean. I’m referring of course to an essential component of the internet, something integral to my adolescence, something that’s ostracised, mocked by mainstream society, something that confuses even the gayest of the gays.

This is sub-zero sub-Reddit level shit.

I am of course talking about fanfic.

You were either there for it or you weren’t. You were either a subscriber to 80 stories across 3 different fandoms – that’s fan kingdom, for those who did not rush home after school to check your email for updates to those eighty stories.

This is not the coming out story anyone has ever asked for, but I thought I’d use this mic to spread my fangirl cooties around anyway.

I have absolutely no idea how I landed in the internet wormhole of fandom. I mean, yes, I was a small gay in a homophobic country in a homophobic school with homophobic friends, but this was 2009, and that was still totally normal. Kristen Stewart hadn’t come out yet, and the public worship of strangers’ dogs wasn’t normal yet.

For anyone who’s never had the pleasure of being a hardcore fan on Tumblr or been sucked into the purgatory of the Zetaboards L Chat, let me explain.

When Buzzfeed posts on Facebook about the Top 20 micro-breweries in Melbourne, one thousand people will jump into the comments section. The comments range from friendly disagreement to aggressive shaming about which beers are yeastier, caps lock screaming about which brewer is best for the environment, and usually a few personal attacks about not having a brain or a distinctive palate.

That is fandom. You are all deeply passionate about beer, but anyone who likes a different beer from you should stop drinking beer forever because they’re just fucking wrong and that’s the worst relationship ever you’ve got a serious problem if you think those two characters would ever fuck, okay?

Anyway, amidst all this chaos, um, I wrote my first multi-chapter piece of fanfic for Eragon, Christopher Paolini’s fantasy novel series that spawned one of the worst movie adaptations of all time,

*Someone in audience jeers in agreement, twice*

inspired many hot-takes… and rewrites. Including from me.

At 14 years old, I wrote 60,000 words, which is where my career really kicked off. By the time I abandoned the story after 13 chapters, 43 people had subscribed to it.

I had 80 reviews. I have brought some of those reviews along tonight

to demonstrate the high level of editorial feedback I was receiving from anonymous internet commentators at the emotionally resilient age of 14.

“I like the story so far, plz update soon.”

Doctor Dandy 69 said, “I tried to give this a chance, I really did, but the sheer stupidity is infuriating. This is possibly one of the worst pieces of literature I have ever read. You fail my friend, plz try again.”

Unfortunately for this anonymous reviewer, I did try again. Again, this is, um, 2009, so naturally I ended up in the gayest, nerdiest, most aggressive tween fandom to ever exist.

If you have never watched the show, let me firstly congratulate you, secondly were you under a rock? Thirdly, let me reassure you that wanna-be Broadway star Rachel Berry and Quinn Fabray, her cheerleader nemesis and fellow soprano were definitely secretly dating each other the whole 6 seasons instead of fighting over the same boys.

At the mature age of 15 years and 1 month, I started my gayest epic yet, which stretched out to a whole 90,000 words.

*Someone in the audience cheers*

I wrote this over 7 months and it’s not quite a humblebrag, but it’s definitely what I’ll be receiving my Pulitzer for.

Anyway, some reviews from my PhD:

Obliterator1519 said, “I got quite a few things to say about this fic especially this chapter. First, this fic isn’t “HUMOUR” at all. Yes, you had some comedic parts but most chapters have been total angst.” Metal Taco said,

‘So far you’ve been really good at making the stories seem pretty realistic so I was a bit disappointed with the ridiculousness of this chapter.” Aquamarinelightnight said, “it took me awhile to read the whole thing but you capture rachel and quinn so perfectly it makes tears come to my eyes thinking about it, because most people don’t and it gives me a headache.”

This is all real.

Of course, fanfic, as much as it is sometimes silly and fraught, is deeply political. We were all desperately hungry for queer content. But all we were getting were the same old stereotypes, or worse, characters who were gay but only in their author’s mind, (I am looking at you, J. K. Rowling).

We wanted stories where the girl got the girl, or the guy has their lack of desire to have sex accepted without judgment, or the person realises that none of our existing gender categories work for them.  But since we weren’t getting any of those stories, we wrote it ourselves. Fanfic, above all the madness, meanness and horniness, was about community.

That was 10 years ago, and though things are far from perfect, I haven’t felt the need to return to fandom, partly because my friends are IRL instead of exclusively online, and partly because… representation is better. Queer characters are in TV shows, films, theatre, nearly everywhere, because the gay agenda took off.

There’s not enough people of colour, there’s never enough characters with disabilities, so many other people are missing – but it’s better in 2009, than 2009, at least.

2019, I have no complaints. Now, I get to watch heart-breaking lesbian drama The Good Fight week-to-week and stress over whether Maia Rindell, a canonical growly-voiced high femme white girl law associate will appear in any more scenes with Amy Breslin, her older lawyer girlfriend ever again. Spoiler alert, close your ears, no.

Now, I get to watch heart-breaking lesbian drama Jane the Virgin week-to-week and stress over Petra Solano and JR’s will-they-won’t-they – spoiler alert, Jon Snow eats out a dragon for gay rights.

Now, I get to watch heart-breaking lesbian drama Killing Eve week-to-week and stress over whether one of the two characters are going to kill each other or fuck each other or do both at the same time and – fuck.

It really makes me concerned for my friends and family. How do straight people handle this kind of pressure all the time in every single show they watch?

Is anyone reaching out to the heterosexuals?

It’s like the writers selected the angst tag and never cleared the search filter, and now we’re stuck watching high quality contemporary TV with queer characters going through canonical relationship drama, instead of me just writing fake drama and a fake happy ending.

Now, this might be a little too controversial for the hashtag Twitter discourse, but I am not afraid to be commercial clickbait. So, Queerstories, here is my original hot-take.

Take the representation back. I am not ready. I am sick of waiting every week to find out if my fave lesbians are going to make it out alive. I’m sick of struggling through well-structured and suspenseful TV writing that puts bi characters through difficult decisions instead of satisfying angsty and ultimately comforting trash.

I can’t take this heartache. I resign. I asked for this, yes—repeatedly, loudly, demandingly—but I take it all back. I’m going back where you can smush characters’ imaginary faces together and pretend they got a happy ending and where producers’ contracts and wages and scheduling doesn’t get in the way.

I’m going back to where it’s safe for a wee gay – fanfic.