In the beginning and now, a story of body, country and connection.

Isobel Morphy-Walsh, a proud Nirim Baluk Woman from the Taun Wurrung (Taungurung) people. She is a lover of anecdote, an artist, an activist, an educator and weaver. Isobel has spent her life working with her community and culture with a particular emphasis on history and its relevance to today. For the last three years, Isobel has worked inside museums with Victorian First Peoples histories, stories and cultures. 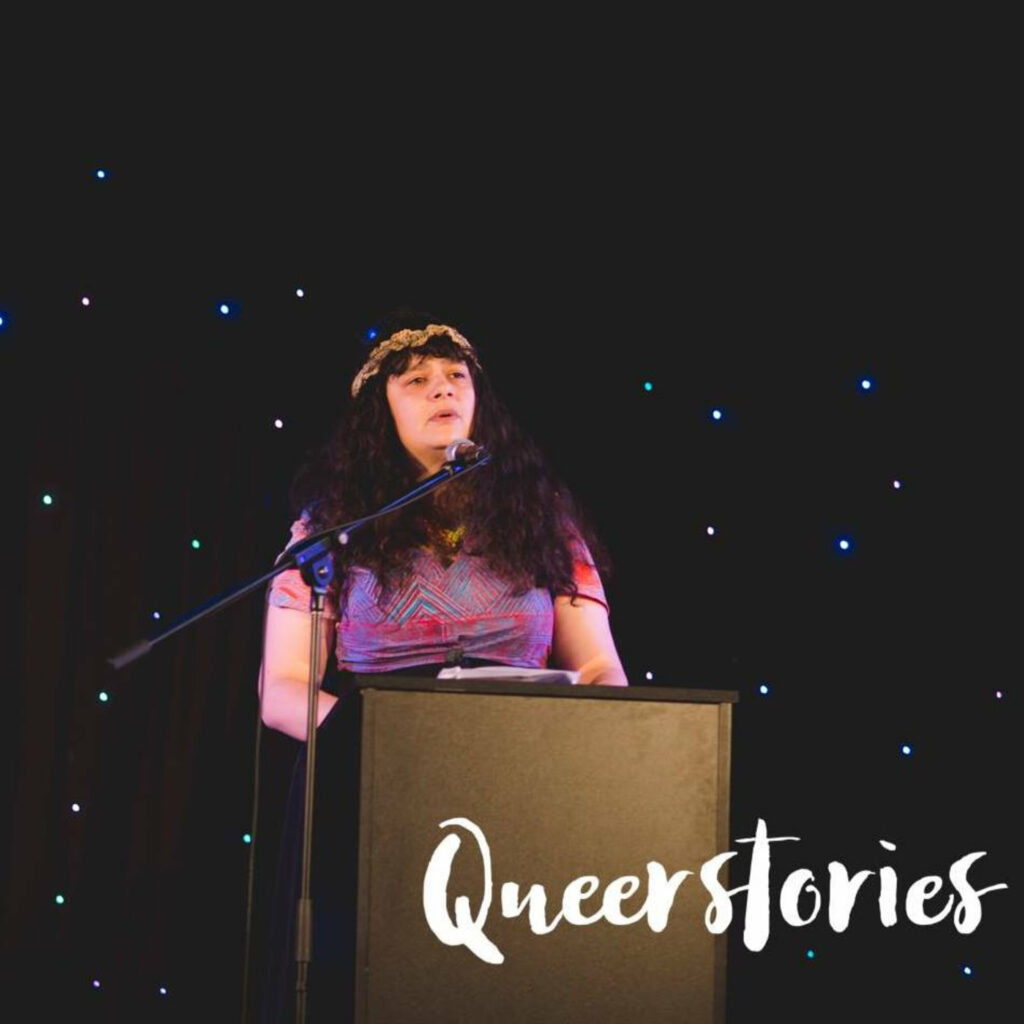 My name’s Nayuka Gorrie, I curated tonight. Tonight’s an all-Black line-up and I’m really excited to be able to do this so thank you all for coming.

So next up, Isobel is a Taun Wurrung (Taungurung) woman. She is a lover of anecdote, an artist, an activist, an educator and weaver. And for the last three years, Isobel has worked inside museums with Victorian First Peoples histories, stories and cultures. And I don’t know if this is too shame job, but Isobel looks fucking sick tonight, and she made her entire outfit, and I think that’s pretty deadly – give it up for Isobel!

Hello, my name is Isobel Morphy-Walsh. My respect, my love I carry to the Wurundjeri people, their old people, ancestors, their wise people and their country. I am grateful and lucky to be here on this country today.

There are a few things going on for me at the moment. It’s been quite a hard year. Big changes have happened to me, to my body, to my family, to the people I love, to my community, to my land. Hard changes, losses, destruction, grief. My country is crying with forests being ripped away daily – in fact just today I was reading about the illegal logging that is going on in Victoria, a lot of which is happening on my country, and how it is now affecting Melbourne’s water supply, so I hope that now people’s water supply is beginning to be affected, now they will listen and care.

I have spent a lot of time weaving. I’m a weaver. It helps me see the world differently, make sense. Weaving grass, bark, knowledge and my life into objects and art, country, body, connection. But weaving is so much more than the act of weaving, it’s knowing the plants, their rhythms, it’s knowing the seasons. It’s yarning. It’s like the women. It’s creation.

So it sort of brings me to tonight and to talking to you. It was really really hard to work out what it is I wanted to say. I wrote a lot more stories, I actually wrote 7,000 words initially, which obviously you’re not going to get the pleasure of all 7,000. Some of them were, you know, a little crap. But that’s what happens.

I wanted to be funny and light, initially, and I tried. I wrote a story about the beautiful lesbian I live with and how she introduced me to my bantam chooks and my broad beans and how I have become – you know crazy cat ladies, I’m not that, I’m a crazy chook lady. But alas, it’s a good story but they gave me 10 minutes and there’s so much going on. My people are dying. So, I didn’t think I could waste the 10 minutes I had on something light and happy today.

So, with that in mind, here we go, three threads of my life woven together.

I should probably say that that is my ancestors’ tongue, my country tongue, that is Taungurung language and I am blessed to be part of the first generation speaking and singing in our language again, and I thank all of those that have gone before me – actually, in my case it was basically all women, Taungurung women, who have allowed me that ability. Anyway, what that meant is this:

In the beginning and in the now, we (humanity, our bodies) are made from the land

In the beginning and now, veins in our body run, same as rivers run over land.

In the beginning and now, when we humanity hurt country, we hurt ourselves.

In the beginning and now, the end (fate) for land and humanity is the same.

In the beginning and right now.

For the last couple of years, over the course of my work I have spent a lot of time, more time than most, looking into yarning about and educating on the Homeland Wars and violence. Looking into the countless stories of massacres, harm, brutality. It’s hard work, but it’s important work. To know what it really means to come from survivors. That’s what learning about massacres is. It made me feel pain. Pain for my people and pain for the acts that had been perpetrated. Pain for what the country had seen. It is a very deep and unsettling feeling, this feeling, and eventually it brings with it something that is more comfortable and more familiar: anger. I can now see a pattern in the way in which my people have been treated since invasion occurred, and I could see it still happening around me through the various systems and intuitions that we have today.

Some elders I love very dearly came in to work and sat down with me to talk about the education programs we were running, and we began to talk massacres. Just your standard sentence. I told them about how the new exhibition installation on the Homeland Wars was being received by the public, its inclusion in our education programs, ones that were coming ahead.  I admitted to these elders that sometimes I felt that I was having to be too restrained. Refraining from telling the public the brutal and horrible truths about the nation’s origins.

I just want you all to take a moment to think about that. There are many massacre stories across this land, some of which you will know, and some of them are so horrid that we in the community don’t talk of them too loudly for the pain it still brings. Like the bubbups and the holes in the ground.

Two uncles spoke next and what they said has changed me forever. They grew me quite a lot in that one moment. Now I’m going to paraphrase these two uncles, Uncle Brenden Kennedy and my father, Uncle Larry Walsh.

We have never fought out of hatred, out of anger, out of fear. Nah, bubby. That’s not us. We fight because we love. We love our land, we love our people and we love our cultures. That is who we are.

This has helped me put down a lot of my anger. Not all of it, I’m sure you can kind of hear it through the dulcet tones of my voice. And I don’t always get it right. But like the uncles and the liwik (the old ones) I’m now trying.

I love that, that’s two words in my language and it means all of those things all at once, and it’s also the word for ‘hug’ – how beautiful is that, right? To protect, to hold.

I’ve told this story before, but in a different way, through weaving. What’s on my head right now is one of the pieces of this story. This is from a part of my country where my family, my clan the Niram Baluk, that land has always, we’ve always belonged to it. We’ve always loved it and lived there since we began. And on my country, many many years ago, a great change occurred. Where my mob came down from the great dividing range to the Warring – the Goulburn, or at least that’s what my mob call the Goulburn – a new people came who did not belong and they built a town. And then for a long time we were no longer welcome or safe. Trees were removed, plants ripped down; habitats, eco-systems, food, homes destroyed, and instead colonial structures and signs of ‘progress’ were built. The country began to get sick.

It became a poor – over time – but regional town, many solider settlements and welfare housing was put up. It developed a strong military presence with a base being located close by. Social, health, education and addiction problems are rife. But it is the closest major shops and public resources in 50 km or so. Like the hospital. I didn’t like the hospital. If you know me, you’ll know, I don’t like hospitals. This hospital in particular I found quite bleak. It’s concrete, and it’s literally surrounded by war memorials. Not war memorials that reference or indicate anything I can relate to, just wars that were fought needlessly overseas. I understand it’s more complicated than that.

A group of women began yarning down at the First Peoples health unit there. People who worked there, people who were there as patients, blakfellas from the community, our families, my mum. They decided to do something really simple. Simple but so, so important. They decided to return something to the landscape. Something that had been missing for far too many years, they decided to plant some lomandra. Deliberately chosen and placed into a landscape it was removed from.

And now, quite a few years later the plants are growing tall and proud and it is one of the only plants that grow round there, on the hospital grounds, on that site of healing. Its return brought with it bugs, beetles and even a colony of ants. Its return brought back bees, or at least the one that bothered me last time I was collecting. It provides some scrub and a place to rest for tired birds. The lomandra’s return has brought back weavers and weaving on a country that has not seen it in some time.

Everything is interconnected; the grass, the bugs, the women, the tradition, the healing, the place. Lomandra acting to do to the people as it does to the land; munda-ngat gumayl (to protect, to hug, to hold all).

I am going to leave you now with a refrain shared above to which I am constantly called to, in both hope and fear. It’s something that’s just constantly ringing through my head at all moments.

The end, the fate for country and people is the same. Both in the beginning and now.