After a year of heartbreaking grief, Hayley reflects on the most precious gifts she has received. 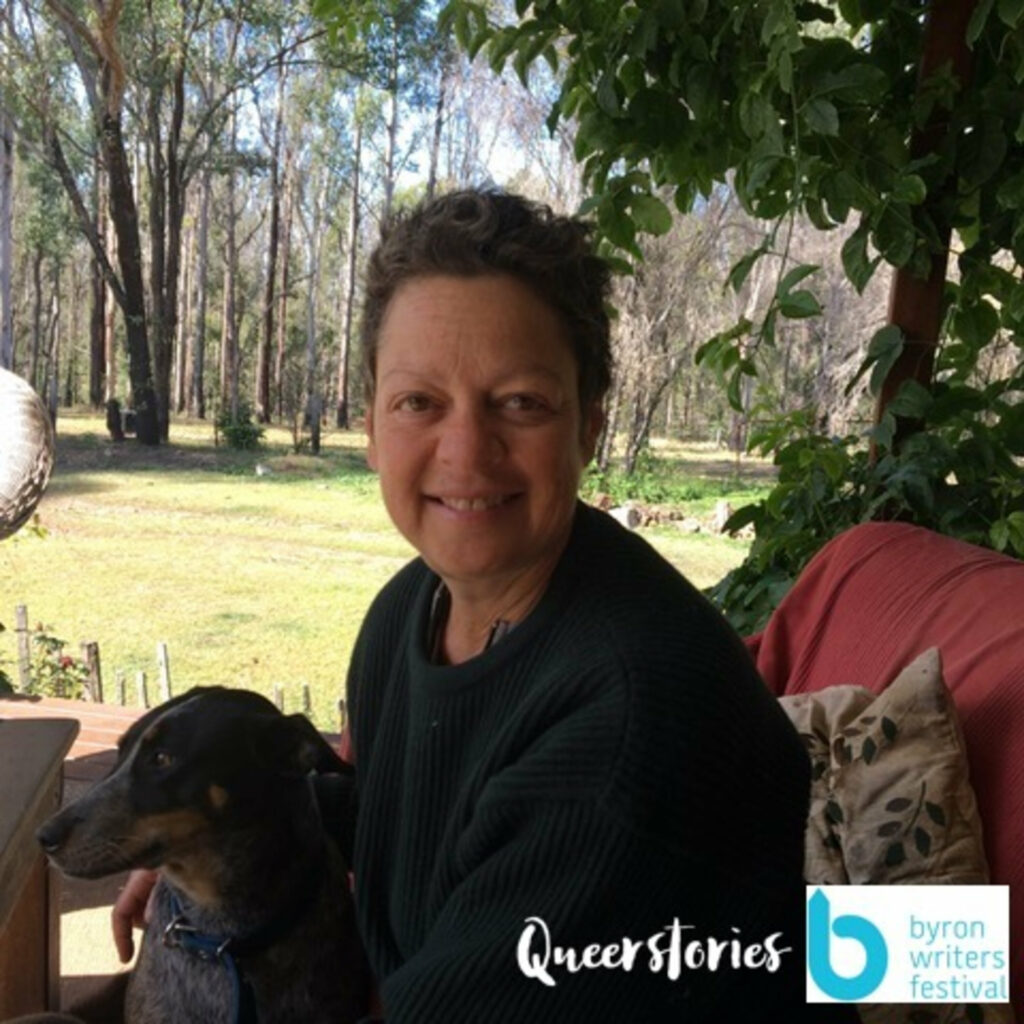 This episode was recorded in partnership with Byron Writers Festival. I was meant to be hosting a live event up north but due to Covid restrictions that obviously couldn’t happen. However, with support from the Copyright Agency’s Cultural Fund, we recorded a very special Byron Writers Festival Queerstories podcast. And you can enjoy the whole thing as part of their Conversations From Byron series at byronwritersfestival.com or you can listen to the stories one at a time here.

Hayley Katzen’s essays have been published in Australian, American and Asian journals and anthologies including Australian Book Review, Griffith Review, Southerly, Fourth Genre and Kenyon Review. Untethered is her debut memoir and you can order it online or from your local independent bookseller.

Hayley
From my hospital bed, I look up at my recently published book – a memoir about belonging. It’s perched on the shelf meant for get-well cards, gifts, and flowers.

My book is the best bunch of flowers; it’s been my joy over this last year when life has seemed so fragile.I sent the book out to publishers exactly one year ago, the day before I came into this same hospital, this same ward with many of the same kind nurses.

Ovarian cancer is sometimes described as a hidden or silent killer because it’s often discovered too late for surgery. But last year, after nine weeks of chemotherapy – ‘the healing elixir’ as I called it – after more scans and another diagnostic surgery, The Brazilian Wizard calculated he could remove all the cancer. I call him The Brazilian Wizard because he’s so remarkably skilled, because his Brazilian-accented turn of phrase delights me, and his bedside manner has instilled hope in my partner Jen and I, even in the most doubting times.Last year I had other wonder-filled bunches of flowers. One lies here now at the bottom of my bed – a cuddly dressing gown with blue polka dots from my closest friend Madeline, in Sydney. I call it my Dalmatian. It arrived with a pink pussy hat after I lost my signature mane of hair, along with a selfie of Madeline wearing her pink pussy hat – one of many funny images she texted to cheer me.

But of all the last year’s flowers, my touchstone friends were my greatest joy.

They flew and drove hours to see us out on the farm. They cooked, they raked leaves and sticks. We talked about the precariousness of health; we laughed about our youthful and ageing exploits. They kept my partner Jen company during the uncertainty of the surgery, during the days I was in ICU and the weeks I was in hospital. One friend came each week to feed the cattle on Chemo Wednesday. We were in drought and even without a sick partner, Jen’s workload had rocketed.

Those friends sent cards and clips from their lives. Before every Chemo Wednesday there were well wishes, even a song to toe-tap along with in the chemo chair.

My friend Jesse sent images of flowers or birds, once of a hot air balloon. ‘Go gently today,’ she said. ‘Like this morning’s balloon.’
After years of feeling lonely and isolated living in the bush, fearing my busy friends had lost interest in me, my messy mind was reset. I was loved. I was cared for, deeply, beautifully.

Lucky too that surgery ‘got it out’ of me – true to my mantra ‘get it out, get it out’.

The Brazilian Wizard cut me from sternum to pubic bone and removed cancer from 17 places. I learned the names of bits of my body after I lost them.
Three weeks after surgery, as I waited to be disconnected from the healing elixir’s purple bag, an email from Ventura Press pinged: they’d love to publish my book.

I squealed. My favourite nurse came over and soon everyone in the chemo lounge was smiling. I rang Madeline and then I rang Jesse – Jesse who’d invited me to join her writing group years before when I’d written nothing but law textbooks and law reports. Jesse cried with joy.

How could this be? I was the one we thought would die first.

The day after the phone call was Chemo Wednesday.

Jesse and her partner met us in town, to talk and cry. The oncologist said I could go to Sydney for Madeline’s funeral as long as I didn’t miss a week of chemo. But he was worried about my immunity – significantly compromised already from the months of treatment and the surgery although this was all before Covid-19. So we drove rather than flew. Madeline’s wife would speak at the funeral; her brother would talk of her childhood, and I would speak of her adult life – just as I’d done at her wedding 20 months earlier.

We’d been close friends for 30 years, since we met at law school soon after I arrived in Australia. I poured my love and respect for my gentle, kind-hearted friend onto the page. At her funeral at the crematorium, wearing that pink pussy hat, I stood tall to honour a woman of true, pure goodness.
I woke at 5 the next morning. In pain, terrible pain. But, but what about my eulogy for Madeline? I was meant to deliver it at a second funeral, a community funeral. Madeline was a woman loved by many.

By mid-morning, Jen and I were in a cab to the nearest emergency department.
Jesse would read the eulogy wearing the pussy hat. Jesse whom I’d walked beside over 20 years as she wrote and published her first and subsequent books, as she developed from a pale nervous speaker into a polished and poised presenter, holding an audience with humour, passion, and exquisite photographs of Antarctica. Jesse who was kind and warm with many but knew the depth, thoughtfulness, and consistency of enduring friendship.
I’m told Jesse did a beautiful job. She texted to say, ‘We missed you, beautiful. Eulogy was delivered in your spirit’.

There’s a recording. I don’t know if I’ll ever be able to watch it. More so now.

Last December, after months of chemotherapy, after months of friends caring and loving, visiting and helping after a bushfire rampaged through our property, my cancer markers suggested I was ‘all clear’. The oncologist added ‘for now’.

A week later, Jesse called from the hospital.

She’d been diagnosed with pancreatic cancer, the very worst of those hidden or silent killers.

‘But it’s you in the bed, not me,’ she said as Jen and I walked into her hospital room, down corridors glittering with Christmas decorations. We sat stunned, the four of us, two girls with cancer and their long-term girlfriends.

Over these last six months of Jesse’s illness, I’ve known what it is to be the friend on the other side, the friend who longs to help, who sends messages and poems and pictures to bring joy. Jesse and I exchanged texts about property – she loved real estate. I sent her my book launch videos from this Covid isolation. I sent her pictures of the mandarin and orange trees’ new growth. Trees she’d pruned of bushfire burn last October, on her last visit to the farm. By April, my cancer markers were up again. Along with the uncertainty. This was outside The Brazilian Wizard’s expertise – too close to the pancreas and portal vein.

Jesse texted, asking about the results.

I ended my reply, ‘I mean really girls – shared experiences!’.

And then I switched to Jesse’s favoured topics: property and publication, my memoir, and thoughts about her beautiful manuscript before she sent it to her agent.

My book was on Jesse’s hospital bedside table after the decision was made to discontinue her treatment.

My book was what she wanted to talk about when she asked that I come and say goodbye. She told me how her psychologist friend, who didn’t usually read memoir or fiction, had loved it. I updated her on the Covid-style promotion and read one chapter to her out loud. I told her all I’d loved about our friendship. Our beautiful, layered friendship. Her last words to me were ‘You are so precious to me, Hayley’.

Jesse died a fortnight later. The same day my triple phase CT scan showed a large cancerous lymph node in my abdominal cavity. A liver surgeon said he could remove it.

Now, 10 days since Jesse’s death, here I am in hospital. Again.

Lucky they were able to flay me open and get it out. Again.

Bewildered by the fragility of life. Again.

I close my eyes and see Jesse as I saw her last, her beautiful blue eyes shining above her blue and white striped pyjamas. And I see my watery friend Madeline in her bright blue rashie at her favourite beach.