Geraldine Hickey terrifies the listener with a slow burning tale about how she managed to manifest her own arachnophobia.

Geraldine Hickey is revered in the industry as a comedian’s comedian and has been shortlisted for the ‘Piece of Wood’ award at the Melbourne International Comedy Festival multiple times. A veteran of many seasons of The Melbourne International Comedy Festival, she is also a regular on the club and pub circuit around the country. Geraldine is a co-host on Breakfasters on Triple R which is where you can now hear her every morning. 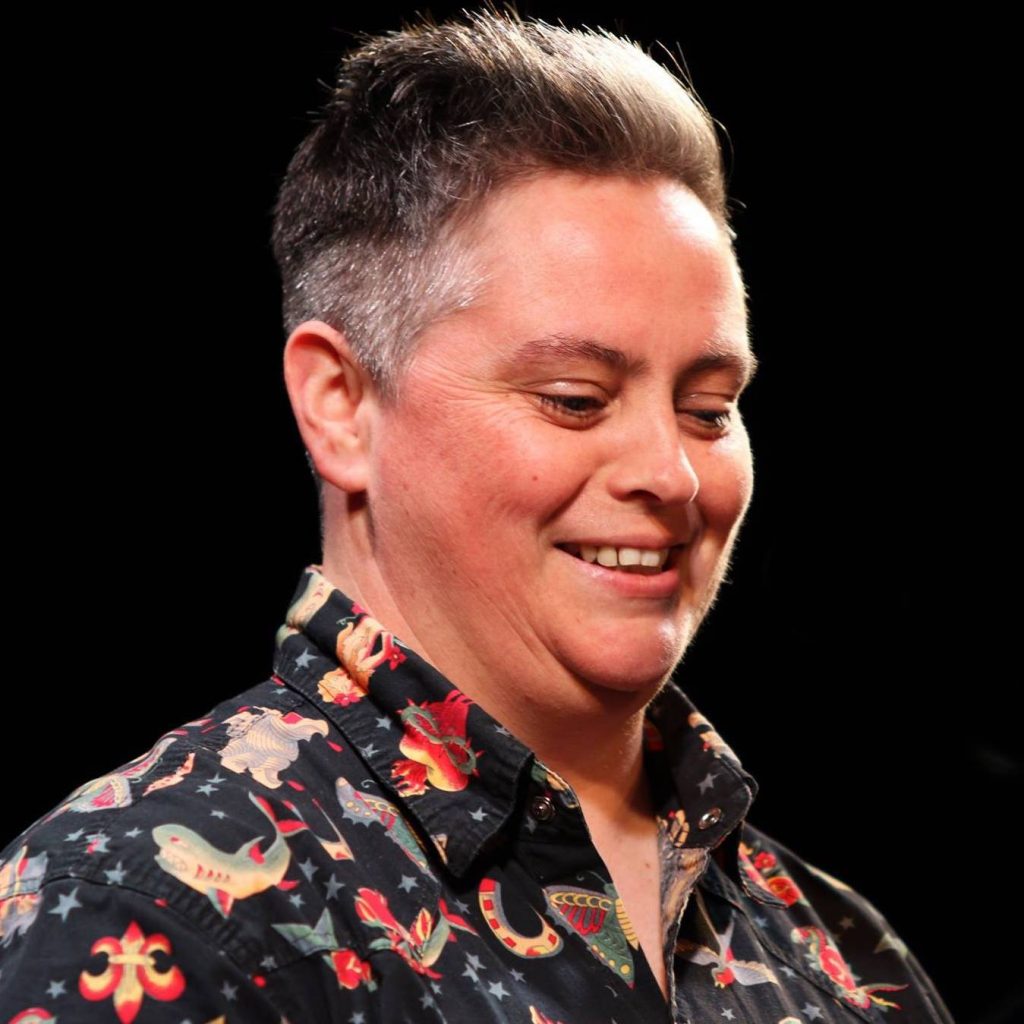 Geraldine Hickey has been described as a deceptively cheery dame who will quietly take out your innards. I don’t know if that’s terrifying or hot. She is revered in the industry as a comedian’s comedian and has been shortlisted for the Piece of Wood Award at the Melbourne International Comedy Festival multiple times. A veteran of many seasons of that festival, she is also a regular on the club and pub circuit around the country.

In 2011, she teamed up with Kate McLennan and Anne Edmonds to host the weekly AFL themed podcast, The Downlow. Melbourne community radio station Triple R loved it so much, they gave the girls their own sports-themed show. It soon became one of the station’s most popular shows and resulted in Geraldine becoming a co-host on Breakfasters, which is where you can now hear her in Melbourne every morning.

It was Christmas three years ago. My mother-in-law – Okay, technically not my mother-in-law but who cares – we’re standing in the kitchen peeling potatoes when a huntsman fell from above and landed on her head with a thud.

Yes, a thud, because that’s how big it was. She brushed it off and my father-in-law… Okay, once again, not technically my father-in-law but we’ll move on. Maybe one day if he plays his cards right. He managed…

He managed to get it into a bowl. Yes, a bowl, because that’s how big it was. A glass wasn’t big enough. We took it outside where we all took some photos before putting it in the garden.

At the time, I only had a mild fear of spiders. Like, if there was someone else around that had a real fear of spiders, I could step up and be the brave one, like, not brave enough to pick it up or anything. You know, there are people that do that? Like, I met a guy once that said if there was a huntsman, and his partner wanted him to take it outside, he would bypass the paper and glass and just grab it with his hands. I mean, he has ended up with multiple bites but still cool, right?

That is amazing. I’m talking the level of brave where I go, “Hey, don’t worry about it. It’s just a spider, it’s harmless.” Then I might take a close look at it – not too close but enough to make it look like I was totally fine with spiders.

When the spider falling in the head on Christmas incident happened I thought, “Oh, I could write a joke about that. I could write a joke about having a fear of spiders.” Like I’m not that scared of them but for the sake of the joke I can make it out that I am absolutely terrified. It started with how huntsmans, whilst relatively harmless, are still big enough to fall onto you when you least expect it, therefore do nothing for your anxiety.

I remembered a friend once told me that a huntsman landed on his penis once.

Yep. And I imagined that would be quite terrifying.

But I don’t have a penis so I thought, “Well, what would that be like if there was a huntsman in my vagina?” But let’s be honest, it’s probably near impossible for a huntsman to fall into my vagina. Nothing has ever just fallen into a vagina.

If I was sitting on a toilet and a huntsman fell, it might be possible that it would fall onto my mons, all right? Or mons pubis. Yes, that mound where your pubic hair grows is called the mons pubis. And, do not feel ashamed for not knowing that because there are a lot of people that don’t know that, because sex education when we were growing up was learning something called the rhythm method.

Which had something to do with tracking your menstrual cycle and there was a particular day you could have sex that gave you a lower chance of getting pregnant, but all this info was only relevant if you were married. Condoms were banned, and they advised against putting a rubber band around your penis. That’s all we learnt.

Oh, and that when you got your period there would only be a total of one tablespoon of blood.  They didn’t say where it came from… So it’s not that weird that at one stage, I thought that we bled out our hands, stigmata style.

It is beautiful, it is natural. I will leave it the way it is. So if a huntsman, which has lots of very small, fine hair, combined with my wiry and curly pubic hair, like, that would have a velcro effect.

After about a year of doing the joke, I developed a serious phobia of spiders. I became the person I was pretending to be in my joke. I used to be fine with spiders. Then one day, in the garden, pruning a tea tree, I was right in there underneath it, and leaves were falling on me, and then I felt some heavier leaves fall on the back of my neck, so I brushed them off – and it was hairy – and the leaves that fell on the ground was a giant huntsman. And I had touched it with my bare hands.

I was very brave though. I very calmly put the saw down and walked around the back to where my partner was and asked her to check if there was anything on the back of my neck. Part of me thought there was now a whole family of huntsmans living there, but also part of me knew that was highly unlikely, but I certainly wasn’t going to be the one to find out.

Before writing that joke, I would have taken a photo of that spider and put it on Instagram with a caption saying, “I touched this with my bare hands. “Hashtag” brave.”

I had proper arachnophobia, however, the worse I got around spiders, the more overly brave my partner became around them. I went low; she went high. She was always cool around them but recently she went next level. We have a wood heater, and if anyone is bringing in the wood from the pile, it’s Cath because that’s where huntsmans like to hang out, and she doesn’t mind nudging them off with her feet if she sees one on a log.

One day, she didn’t see a huntsman that was hanging out on the log until she put it in the fire. She put the log in the fire, and then it was too late to nudge it off with her foot. Do you know what happens to a huntsman in a fire? Me neither.

Because Cath had no intentions of watching a huntsman burn, so she grabbed it with her bare hands. She put her hand into a fire and grabbed a huntsman off a log to save its life.

You know what happened? It struggled. It clung to the log for dear life before she managed to pull it off and drop it on the ground, where it ran off, and I had to have another few nips of whiskey. The whole time it was happening, you know what Cath was thinking? “Ha! A huntsman would be like Velcro on Geraldine’s mons.” Thanks very much. Hope you enjoyed it. Have a good night. Thank you.