Through heartlines and bloodlines, Gabrielle tells a story of belonging, about her history and her family.

This story was performed at the first Wollongong Queerstories, supported by Wollongong City Libraries.

Gabrielle Journey Jones is a poet, percussionist and event producer living on Yuin Country, Far South Coast NSW. Gabe co-founded Creative Womyn Down Under in 2006 as a way to support other lesbian artists and musicians. In 2018, Gabe established Poetic Percussion to expand her work teaching and performing poetry and drumming in schools and with community organisations. She has worked with the Unspoken Words Collective, Word in Hand, Red Room Poetry, Word Travels and the South Coast Writers Centre. 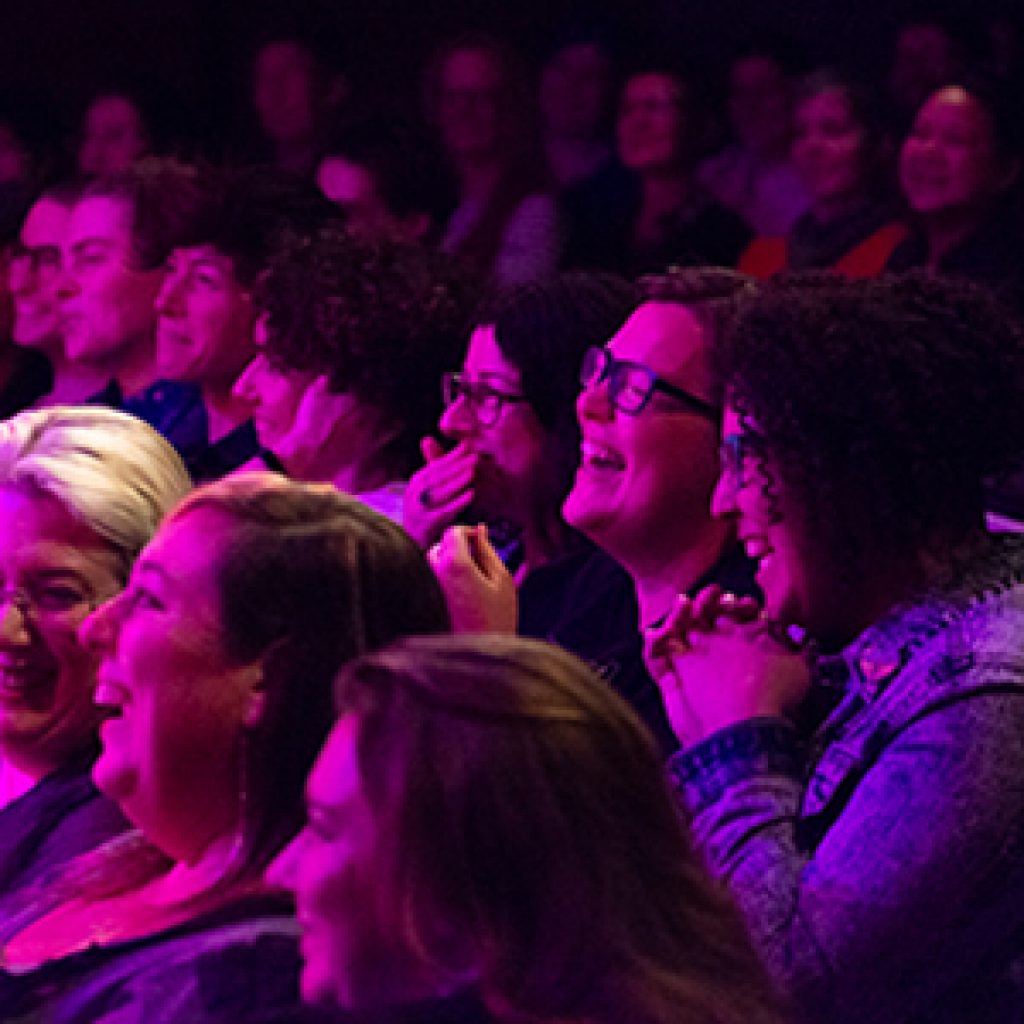 Gabrielle Journey Jones is a poet, percussionist and event producer living on Yuin Country, Far South Coast of NSW. Gabe co-founded Creative Womyn Down Under in 2006 as a way to support other lesbian artists and musicians. In 2018, Gabe established Poetic Percussion to expand her work teaching and performing poetry and drumming in schools and with community organisations. She has worked with Unspoken Words Collective, Word in Hand, Red Room Poetry, Word Travels and the South Coast Writers Centre.

Thank you, thanks Maeve. I gratefully acknowledge that we are sharing stories tonight on stolen Dharawal country.

Belonging has been a curious concept to nurture, especially growing up without ever seeing anyone who looked just like me and learning to accept that I didn’t know a single person I was genetically related to. I was adopted at 5 weeks old, from Crown Street Women’s Hospital Sydney, 1972. Any Crown Street people in here?

So, I had an instant big brother, mother and father. This was a time when unmarried mothers were strongly encouraged to relinquish their babies. Now acknowledged as Forced Adoption practices.

Growing up, I, like many other adoptees had unanswered questions: Who in this world did I look like? Somewhere out there were two people who created me. Did I share personality traits, natural talents or interests with my birth parents? Who did I get my afro from? Where is my tribe and how did they get to Australia? Where am I REALLY from??? So, I had the same questions about myself that complete strangers have been asking me all my life, as if they urgently need to know.

So, my parents, the Joneses from Welsh, English and Irish bloodlines were not able to have biological children. So they adopted 4 kids from 4 diverse cultural backgrounds in the 70s. We were adopted between 2 & 10 weeks old.

My parents met while working with children in the NSW welfare system. My dad was a psychologist and mum was a child welfare worker. Officer. They wanted to provide a home and family for babies who were difficult to impossible to place. People wanted blue-eyed blond-haired girls. My parents had seen so many issues with racism and belonging for children of colour displaced without any family connections in child welfare establishments.

So, everyone thought my siblings and I looked alike with our dark skin and our fuzzy hair, all cut into the same bowl shape by my Mum – with much, much protest. I think I’m returning that way. Um…

Grandma Jones used to call us the United Nations. My older brother is from Polish and African-American birth parents. One of my sisters is from Fijian heritage and the youngest onw is from a Timorese background. I remember one of my friend’s mothers insisting I was my sister and in the end I used to just wave and say “Bula vinaka” a Fijian greeting. What am I gonna do?

So, we had a very adventurous childhood with great friends and extended family. We belonged to an unusual but happy, colourful, and open-minded modern family.

Red Letter Day: When I was 13, my parents and I wrote and requested information on my biological family from government services. They encouraged all of us to find out about our cultural heritage. They knew that my first mother was Maori but didn’t know much else. When we began to ask questions about where we were from, my parents explained to my siblings and I that our birth mothers may not have wanted to adopt us out. There was a social – there was social stigma in those times around single mums and archaic government policies before Prime Minister Whitlam introduced major social reform like the supporting mothers benefit.

So, after months of waiting, I finally received a response on crisp white official paper with bold red letterhead – Department of Family and Community Services. It felt like that good type of embossed paper reserved for wedding invitations. So, as I opened that fancy envelope, I remember in my year 7 mind, imagining how I would carry this letter with me everywhere and read it out to people when they asked, “but where are you REALLY from?”

The letter announced:
“We are pleased to provide information on Gabrielle’s background… Her mother was Maori and her father was Maori”

There had been a small chance I may have been content to live the rest of my life without needing any further information on my cultural background. I wanted to believe the letter was correct. However, looking in the mirror at this dark face and this black afro, that correspondence only served to spark my curiosity around searching for my birth family.

So, where I was REALLY from?

Five years later when adoption laws changed in Australia and I was 18, making it easier for birth families and adoptees to find and contact each other. My parents encouraged my siblings and I to look for our biological families and let our birth mothers know that we were OK. I’m not sure if they were trying to get us out of there, the teenage years, but… They were like, ‘go and find that family!’

Okay. So, they actually, they said to us, quite often that if they had been forced to adopt a child out, they would love to know that that child was actually okay, so I contacted the Post Adoptive Resource Centre in Sydney and they sent information on searching and they had counsellors to support reunion decisions.

When I was 21 I met my first mother, my 3 younger brothers and extended family in Sydney. My letter from 1985 only had half of the information correct. I did belong to Maori – North Island New Zealand’s Ngāpuhi tribe on my mother’s side.
When my first mother told me that my biological father was African-American, that simple missing piece of information was a revelation and such a relief. I finally had the answers for myself (and for random others) about where I was from. And strangely I also remember feeling relief for my unborn children because they would now be able to grow up and know where they were from.

Present Day:  That reunion with my first mother was 25 years ago. I do feel really blessed to have met my Maori family and to have had ongoing contact, to see my younger brothers and cousins grow up and start their own families, and they’re all sort around the Illawarra, Campbelltown way, so pretty local to here.

However, my birth father’s name, his face, his life story has remained a mystery. And I will be 50 in a few years and I may never get to meet him or know what he looks like. However, the mystery of my birth father’s culture from 500+ years ago was hidden in the cells of my own existence until 3 weeks ago when I received my DNA results.

My body which appears so culturally diverse and so frequently elicits the question “Where are you from?” gave up the mystery in a 2-minute saliva test. My DNA gave evidence of bloodline belonging.

So, this body belongs 44% to the Ivory Coast / Ghana, West Africa; and my body belongs 38% to my Polynesian ancestors. And then it gets really cool and tricky as well. My body belongs 18% to a mixture of England, Wales, Northern Europe, Mali, Benin/Togo, Norway, Sweden, that was a surprise, France and Germanic Europe.

So, in closing I just want to say that adoption belonging ripples through generations, across continents and weaves through family trees like the wind, making our branches and family storylines more interesting. I feel very fortunate and deeply grateful for my family connections through biological bloodlines and through adoption heartlines.

Belonging is created in the courage to find answers and speak our truth into the songs we sing to ourselves that celebrate all of the people who journey our stories.

However we find them or they find us.