Francis Voon and James Adcock know the lead up to marriage equality may not be easy, but they are saying YES to love, even if that means wearing matching merchandise. Francis and James have been together for 5 years. James is an architect and Francis works on the marriage equality campaign. Queerstories is an LGBTQIA+ storytelling night programmed by Maeve Marsden, with regular events in Sydney, Melbourne and Brisbane. For Queerstories event dates, visit www.maevemarsden.com, and follow Queerstories on Facebook. 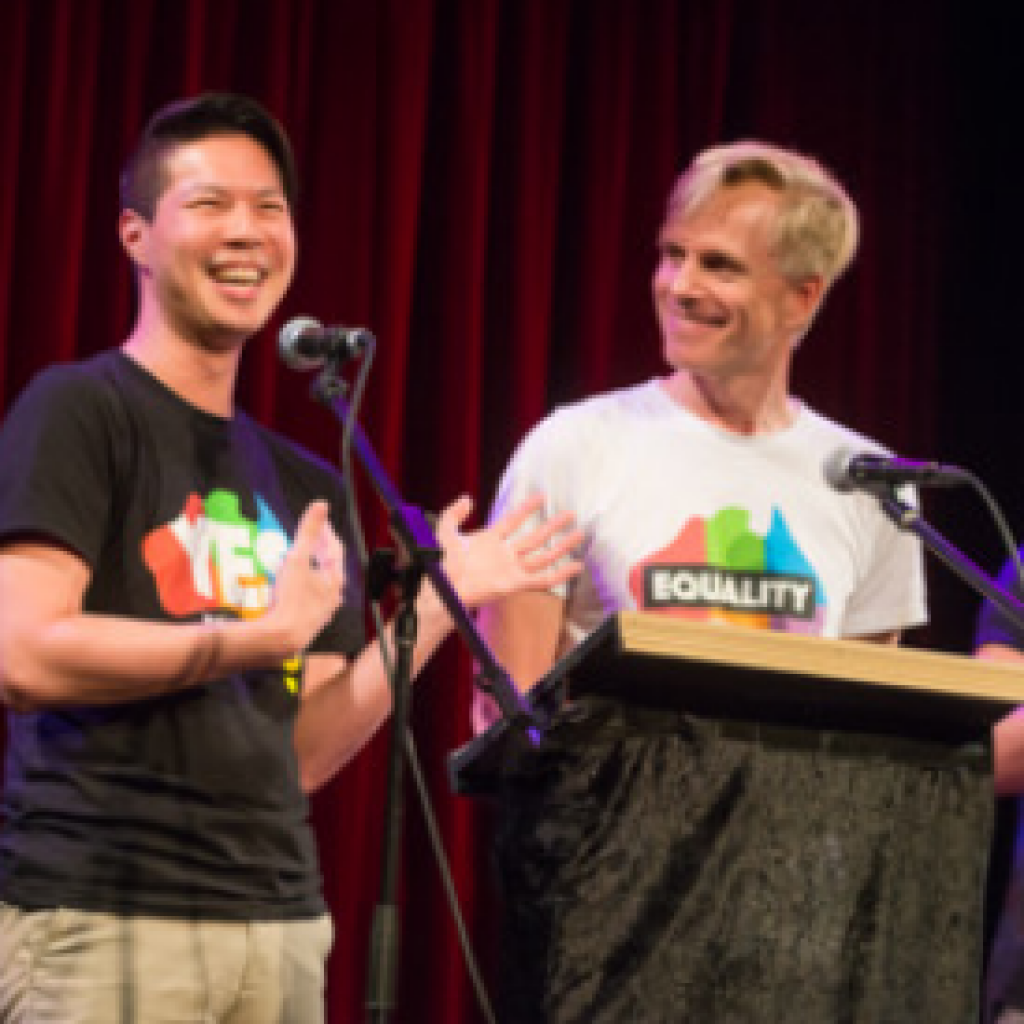 Hi. I’m Maeve Marsden and you’re listening to Queerstories – the podcast for the monthly LGBTQIA storytelling night I host and programme. This week’s story was part of a special event where I invited pairs of queers to share a tale together. Lovers, family, couples, friends. Queerstories Two by Two, celebrating all forms of queer love. Next up, architect James Adcock and his partner, Marriage Equality activist Francis Voon.

JAMES: There was a Facebook meme going around recently, suggesting that couples could name their first-born child after the place where they met. The first-born child of Francis and I would be called Mad Pizza.

JAMES: An unusual name, especially the Rainbow community where other rainbow children would surely be called Grindr, or maybe Tinder or Pink Sofa. But the reason we were at Mad Pizza that night, it was not a random coincidence, and nor was it our shared love of carbohydrates. It was because it was the venue of the Sydney Gay Meditation Group Christmas Party, which is where we met.

FRANCIS: And, since then, James and I have had a lot of really interesting adventures, and we’ve travelled to incredibly exotic overseas destinations like India and Tasmania.

FRANCIS: Overseas, you know. And, we’ve watched Downton Abbey together, and we’ve tried to break free from those escape room puzzle things. And one of the most impactful events though to happen to us as a couple is Marriage Equality, and you can tell because we are wearing the proof. And, to those listening on the podcast, we are of course referring to our equality tee shirts. The tee shirts have actually become very strongly featured in our lives in the past year. I notice that a couple of you were wearing them too, so hands up if you’re wearing a shirt. One.

FRANCIS: So, we both became more actively involved to my work at the campaign, so I’m working with LGBTI supportive faith and multicultural groups, which is so easy to do. And, one of the first things we did as a couple for Marriage Equality was to be involved in that first TV ad. You may remember that ad where a whole group of everyday Aussies are marching together hand-in-hand to the song Lanterns by Birds of Tokyo, and paintbrushes in hand, creating this giant rainbow coloured map of Australia with the word “Equality” emblazoned across it. Then, of course, there was that iconic little street party they called the Mardi Gras Parade, and we also proudly wore our tee shirts, then to go with thousands of others marching for equality.

JAMES: Talking of crowds, I love the City2Surf. I’ve been doing it for years, so I took Francis along. Now, Francis may not be described as the running kind. The highlight of the run for Francis was that we passed at Charcoal Chicken Charlie shop.

JAMES: Francis was the only runner with a chicken burger.

FRANCIS: It was very yummy.

JAMES: While also carrying in his other hand a take-home carry pack, full of chips and nuggets. This year, for some reason, he wouldn’t do it with me. However, he did help out at the start of the race. There he was at the Marriage Equality Campaign stall with Alex Greenwich and Ian Thorpe, handing out badges, stickers, other Marriage Equality stuff, and helping the runners and athletes ensure that their voting details were up to date online, while I ran in the race. I was made to wear this tee shirt in the race. And, running along, I was impressed by all the comments I got from people. “Well done! Doing well! You’re great!” I thought this was because of my stellar running performance. Then, I realized I was walking. And, the reason I was getting these accolades was because of the support for Marriage Equality. People were congratulating me on wearing this tee shirt and supporting Marriage Equality.

FRANCIS: As you’ve just heard, I don’t really enjoy doing much cardio, but thanks to all these Equality rallies this year, my steps are definitely up. James and I, and together with 29,998 others in Sydney, probably many of whom are in the audience tonight, marched from Town Hall to Circular Quay. Yeah, well done, everyone.

FRANCIS: Due to the crowds, it was difficult to do anything that day. Sure, we couldn’t hear much of what anyone was saying from the speakers, and sure it was even more crowded than the mad rush to a bar when last drinks are called but, look, I must say, it felt so good to be surrounded by all these happy people, joining together in solidarity. Do you remember what that vibe of celebration that we had in Sydney when we hosted the Olympics? Remember that? It felt a bit like that, just only much more gay. So, on a touching note for me, it was also really nice because some of my relatives came marching with me. That was important to me because earlier this year, one of my sisters got married. I love my sister. My family is of Malaysian Chinese heritage, and one of the cultural traditions that we have is a tea ceremony where married relatives are called forward to present cups of tea to the newlyweds in exchange for those red packets full with money.

FRANCIS: Now, my extended family… Well, you know, it’s tradition. My extended family love and accept James and I, as a couple. We were invited to everything together; Christmases, birthdays, that sort of thing. At this particular occasion of the tea ceremony, my aunties and their husbands’ names were called and they stepped forward to participate in the ritual. Then, my uncles and their wives were called forward and they participated. Then, my cousins and their spouses’ names were called, and then as I was called forward, I realized that it was just my name that was being called and that James was standing there at the sidelines. Then, it suddenly struck me just how sad it was that our unmarried status had meant that we were inadvertently excluded from this family tradition, not because of any malice but just because it hadn’t crossed anyone’s’ minds to include us until it was too late.

JAMES: I like to think that within my family, Francis and I are acknowledged and recognized as a couple. My mother died a year ago, and like many Anglo Saxons, I dealt with this with a stoic British stiff upper lip, until I was giving the eulogy at the funeral. As I was standing at a lectern, not dissimilar to this, I felt an uncustomary surge of emotion. Now, I am an ugly crier.

JAMES: I get red-faced, snotty and snivelly. I hope you don’t get to see that tonight. I thought, “I’m not going to get through this eulogy.” I was gripping at the podium and Francis joined me from the audience. He lent me his strength and support, and I got through the eulogy. There we were, together, standing as a couple in front of my extended family, acknowledged, recognized, and accepted as a couple, as any couple should be. It’s funny how you can sometimes find acceptance in the most unlikely of places. Have you heard of Comic-Con?

JAMES: We’ve got just as many Comic-Con supporters as Marriage Equality supporters.

JAMES: Well done. Well, I’d seen Comic-Con on Big Bang. We have one. Hundreds of people get dressed up as superheroes and anime characters. Francis and I got free tickets. Of course, we went along and, of course, we wore our Marriage Equality tee shirts. Curiously, we were really well accepted there, really well accepted. Even the official show bag had a Marriage Equality flyer in it. It was great. And, who do you think we ran into at Comic-Con?

JAMES: But, [crosstalk] we also ran in… We ran into a lesbian Star Wars Startrooper.

JAMES: You can tell who’s the Comic-Con fan in this relationship. I had to ask Francis who she was. Okay, let’s try that again. Star Wars Startrooper.

FRANCIS: Now, speaking of costumes, it’s that awkward time of year again where the shops have that weird mix, have you noticed, of Halloween costumes and Christmas chocolates. It means that another year has passed, and it is once again time for us to organise parties for the festive season.

JAMES: It’s also the time of year that our Sydney Gay Meditation Group organises its Christmas party, and that’s our anniversary; six years since we first met.

FRANCIS: As with most community events, I will be of course wearing my Equality tee shirt.

JAMES: Much as we both enjoy wearing these beautiful tee shirts, we hope that will be the last time we have to wear them.