Emma Valente is the Co-Artistic director and Co-CEO of feminist theatre company THE RABBLE. She is also a director, lighting designer, dramaturg, video designer and occasional trouble maker. Emma has directed works for mainstage festivals and venues around the country, and overseas, she teaches Dramaturgy and Performance Making at Monash University, and she mentors for VCA, Melbourne University, the Pinnacle Foundation and Midsumma Futures. 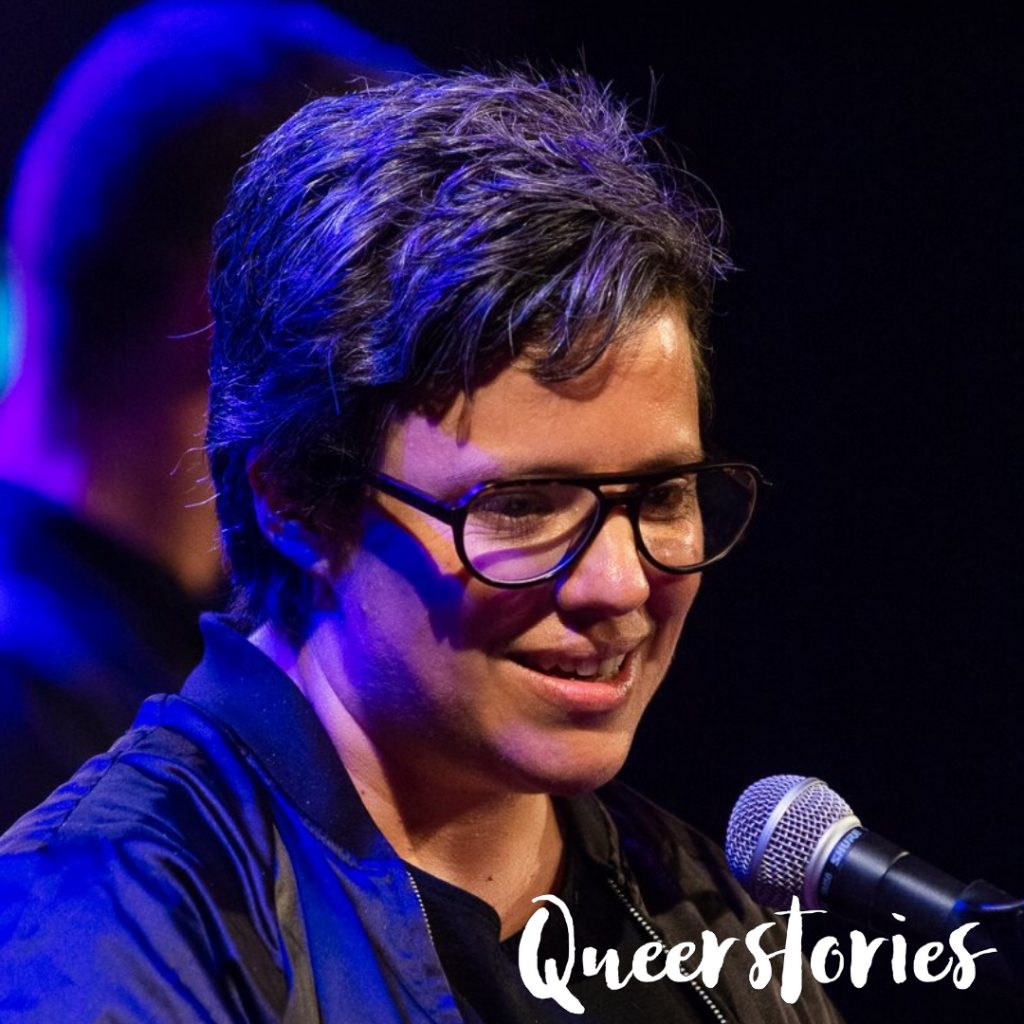 Emma Valente is the Co-Artistic Director and Co-CEO of feminist theatre company THE RABBLE. She is also a director, lighting designer, dramaturg, video designer and occasional trouble-maker. Emma has directed works for mainstage festivals and venues around the country, and overseas. She teaches Dramaturgy and Performance Making at Monash University, and she mentors for VCA, Melbourne University, the Pinnacle Foundation. and Midsumma Futures. I loved Emma’s story so much when she performed it in Melbourne that I booked her to do it again in Sydney in January 2019.

There’s this five-year-old kid who lives in my block of flats and he’s befriended all the neighbours. He just waits for people to come out of their homes so he can say hi. “Hi… Hi… Hi… ”

I am not like this. I don’t like meeting new adults. I change my coffee shop if they learn my order.

I order the same soy latte every time, but I feel like if the coffee shop knows my order then I will be forced to order the same drink for the rest of my life, so as not to embarrass the barista.  Contrarily, I’m prone to bursts of love towards my family, or friends, or cats, or myself, or poems.

Adrienne Rich’s poetry has narrated many of the difficult moments in my life.

it must be the loneliness

of waking first, of breathing

of being the one awake

in a house wrapped in sleep

Most days, if I’m awake, there isn’t anyone in my house wrapped in sleep. Someone knocked on my door the other day and it was weird.

No one ever knocks on my door. So, I opened it and there was no one there. So I closed it again… and then two minutes later there was another knock… No one… Et cetera. So I stood hovering at my door, peering through the peephole, and then I saw Michael – who is the kid who hangs out the front of my flats – knocking and then running away again. So, eventually I catch him in the act, about to knock on my door, and I swing the door open. I say, “You wanna play?”

Michael is five. He has one earring, tracksuit pants, and he smells like cigarettes. We play a very complicated game; a game where you have to take your imaginary car to the mechanic, but the mechanic, who is invisible, instead of fixing your car, just swaps it out for another one, and you get a better imaginary car, so the cars just keep getting faster and better, until you’re just running around the driveway making the sounds of screeching tyres.

I have several dating apps on my phone.

Anyone who has Snapchat filters as their profile pic. Anyone who seems too earnest, or not serious enough, or doesn’t read, or doesn’t like the arts, or doesn’t have a job, or has a picture of themselves sailing. And it’s easy to forget that I like, very much, people who are not like me.

Michael starts knocking on my door most mornings. He’s not allowed inside of anyone’s flat in the block – his dad has forbid it – so we start playing cards over the threshold of my front door. I have a pack of transformer cards, and he always wants to be Bumblebee, even though it’s a crap card and Bumblebee doesn’t have any powers.

I go on a date with a woman to a Japanese restaurant and she won’t pick any food from the tapas menu. She says whatever I pick will be great, so that’s how I know there’s no future for us…

… because she’s being so amenable.

Sometimes, Michael runs across the threshold of my front door and marvels at how much stuff I have. “Is everything yours?” Michael has two prized possessions: His Ninja Turtle Bike and one of those helicopters that, when you pull the strings, it whizzes into the air. I let him fly it into my house from the front door and we both watch to see if it hits anything: That vase, that lamp, that mug! It’s hilarious, and I whoop and we scream, and the helicopter smashes into one of my vases.

“Michael!” His Dad would yell out the window of their flat, and then Michael would piss bolt home, leaving whatever he was doing. “Michael! Psst!” A helicopter still catapulting around the lounge room.

Another day, Michael and I play cards across the threshold.

“I love you is for family,” I say. “I like you is for friends,” even though I don’t even believe this. I just don’t want him to be confused.

I go on a date with a girl who really wants me to kiss her, so I do, even though I don’t feel like it. I do it because I know it will make her happy and I feel wretched about this afterwards, and I never call her again.

“We’ve talked about this, and you just wait ‘til I’m off the phone.”

He frowns. He leaves. I stay in the car and I’m trying to sort out some finances for my theatre company. Then, suddenly, a mouth appears on the window of my car. Dead-pan, Michael starts licking the car window and then puffing his mouth on it.

“I’ll have to call you back. Michael, you can’t do that while I’m on the phone.”

And then he rages away.

I go on a date with a woman and we have a great time. She orders wine like a pro, and she knows about cheese, which I find very attractive. And we go on a second date, and we talk about our favourite artworks. She agrees that trampolining would be an excellent third date. Then, I start thinking it will never work because we look too similar and we have the same glasses, and that won’t work, so I cancel our trampolining date and I ghost her out, and I’m an idiot.

Yeah, such an idiot.

Another day, there’s a knock on my door. “Do you have a boyfriend?” Michael asks. “No.” Then he runs off. Two minutes later, there’s another knock on my door. “Hello.” This time Michael is there with Vish, another neighbour. “Hi.” Vish smiles. Michael starts performing a dance. He’s wiggling his hips like… *musical tone* “Do-do-do-do-do-doooo.” Vish doesn’t say anything.  He just runs his fingers through his hair and then edges out of my doorway. “See ya,” yells Michael. I close my door. That was strange.

Then, there’s another knock and it’s just Michael this time. He says, “Will you go on a date with Vish?”

And he says, “What does that mean?”

I say, “Mainly it means I go on dates with women.”

It takes all my strength to say, “No, not Vish! Who turned up at my door just to look at me and then asks me out via a five-year-old. No!”

And then Michael says, “Not me?”

Two days later, he knocks on my door and we sort out the transformer cards, and he sneaks BumbleBee into his pack.

“Who told you that?”

“Do you think I’m disgusting?”

“No. You remind me of my baby sister.”

“Yeah. She’s in Queensland with my Mum, and I miss her.”

I get really expert at the end of dates. I get brilliant at the required ambiguity because the rhythm of goodbye between two people is, inevitably, an expression of when we hope to see each other again.

And it’s hard to escape these patterns.

Over Christmas, I don’t see him and I go and visit my family. And I roast two chickens, and we pull crackers, and we wear silly hats. And then I get home on Boxing Day, and Michael’s Ninja turtle bike isn’t out the front, and he doesn’t knock on my door… the next day or the day after, or the day after. I put the Transformer cards away and I spin the top of his helicopter on my finger while I’m on the phone.

It’s with the rowboat ice-fast on the shore

In the last red light of the year

Ice nor mud nor winter light

But wood, with a gift for burning

“I took him back to Queensland. It happened kind of suddenly”