Emily Wilkinson contemplates the consequences of getting what you wished for.

Emily is someone you typically find behind the scenes. An IT sysadmin by day and a theatrical audio tech by night, both careers in which success is defined as no one noticing when she screws up. She writes short stories that she shows to no one, and has a blog with all its posts set to private. She has a fondness for non-gestational-lesbian-Mum jokes, despite not yet being a non-gestational-lesbian-Mum. 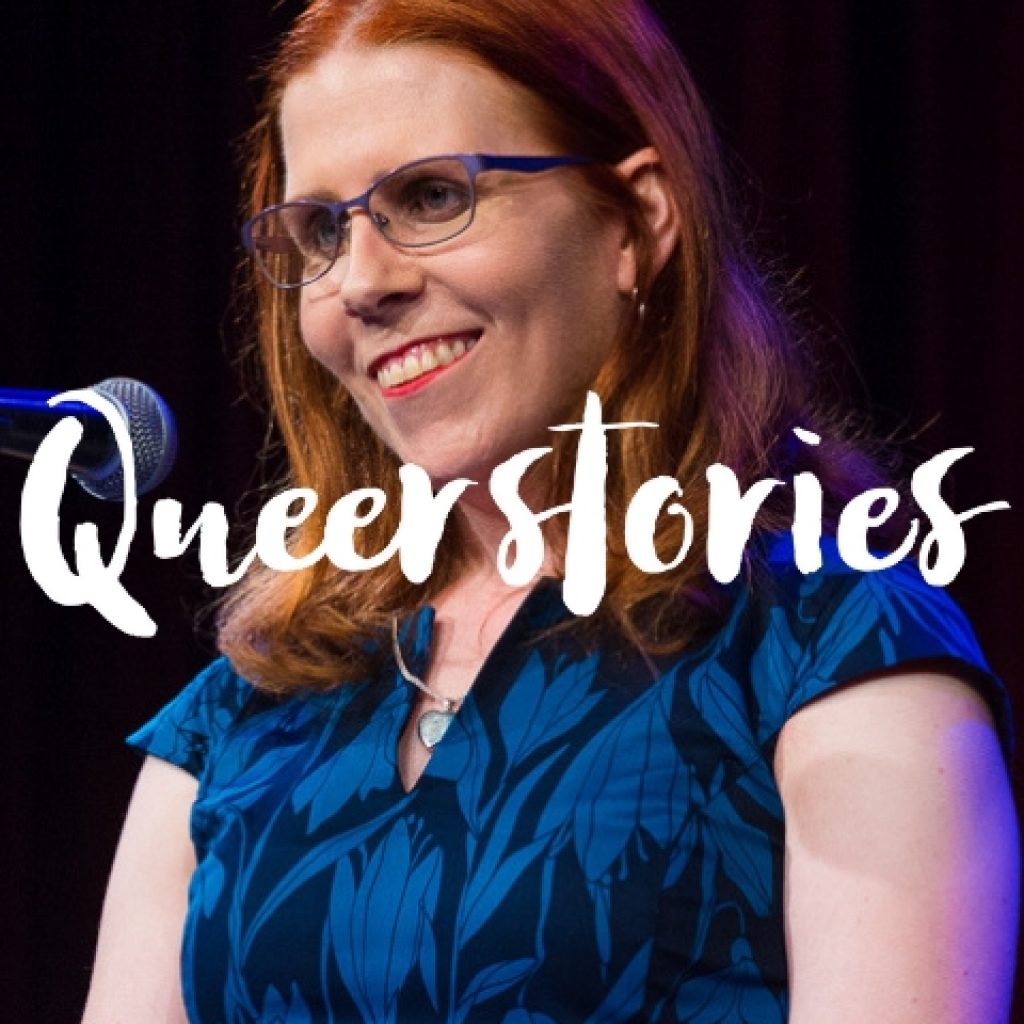 Hi, I’m Maeve Marsden and you’re listening to Queerstories – the podcast for the LGBTQIA story telling night I host and program in Sydney and Melbourne. This week – Emily Wilkinson is someone you’d typically find behind the scenes, an IT sys admin by day and a theatrical audio tech by night. She’s chosen careers in which success is defined as no one noticing when she screws up. She writes short stories that she shows to no one, and has a blog with all its posts set to private. She has a fondness for non gestational lesbian mum jokes, despite not yet being a non gestational lesbian mum. I love these bios. Emily emailed this piece to me and I just knew she had to perform it. I was away when she performed at Queerstories in April 2018 but I hear she received quite the standing ovation.

It’s a question we’ve all been confronted with at some point – for many of us it came early, for others, more recently. Our lives from that point on are shaped not just by the answer itself but by what answering the question reveals to us about ourselves. ‘Would you rather be able to fly, or be invisible?’ I don’t know about you but I was always firmly in the latter category. Since childhood I wanted to hide, to vanish, to disappear because somehow I considered a super power to be a more realistic wish than just growing up to be like my Mum instead of like my Dad.

I grew up on the Central Coast, about 90 minutes drive from here. A lovely place to visit, but I kind of wish I hadn’t lived there. I do concede that it was probably the ‘then’ that was just as much the problem. I was always a different kid, a very precocious reader, the time I started kindergarten expressing great frustration that my four year old fine motor skills were not up to the task of writing things as neatly as I could type them. I thought about a lot of things that weren’t typical for a ten year old. Things like public key cryptography, crop rotation, why it is that time moves in one direction and not the other. And gender. Where most of these could merely have me labeled a geek (let’s face it, they did), I knew that the last was absolutely taboo. The world was very clear on that. Deviation from gender norms was drag queens, Jerry Springer guests, Tim fucking Curry in fucking fishnet stockings. Trans-whatever was perverts and punchlines, and it absolutely wasn’t a kid who got born with the wrong plumbing who just wanted to grow up to be an ordinary woman.

I was like a pacifist who dreams of being a pilot but the only types of planes she knows about are fighter jets. So, I hid. I hid from my family. Apparently so well that two decades later my mother would insist that there were never any signs. I hid from society, falling back on my geekiness as an acceptable way to eschew traditional masculinity. I hid from myself, dissociating from my body and repressing the deep wrongness that was my constant companion.

It was only a few years ago that I stood in a dressing room, trying on a suit for a very straight wedding to a very straight woman, and finally admitted to myself that on some level I’d always expected to spend my wedding day wearing a white dress. That I found a blog post about gender dysphoria, Zinnia Jones if anyone is interested, then spent three hours falling down the rabbit hole, following links from one article to the next. The information was not new to me, but it was the first time that I didn’t try to convince myself “I’m totally only reading about Hormone Replacement Therapy because the endocrine system is fascinating”. Moreover, I finally started to recognise that the authors of these blogs and articles were people like me. A pilot can fly passenger jets, or helicopters, or ultralights if that’s whats right for her. These were ordinary people who had once been children who felt wrong. If they could do something about it, and so could I.

Three years on from that day, I had a new job. I was a year recovered from genital origami. My circles of friends had changed significantly. I was learning to dance in heels and finally part of a community I had been afraid of for so long. One Saturday afternoon I was helping prepare a Mardi Gras float and during a conversation about our families I mentioned how anxious I’d been the day I came out to my grandparents. “You came out? I thought you were an ally.” I’d known this guy since the last Mardi Gras, we’re here covering a giant set of rainbow wings with glitter and he thinks I’m an ally? I’d have written it off, but then it happened again a few weeks later. A good friend this time, someone I thought I’d been completely open with, telling me she had no idea I was trans. That’s when I realised that, without quite meaning for it to happen, I’d started to go stealth. It wasn’t the deep stealth of the bad old days of Harry Benjamin, when you were expected to cut all ties to everyone who’d ever known you, move across the country, and never speak of it again. This was more of a casual stealth, born out of the polite fictions like: “I was kind of a tomboy when I was younger.” “I can’t get pregnant, my puberty was all screwed up and they had to take a bunch of stuff out.” Just not outright saying I’m trans.

I’d got my superpower. I was invisible.

What do I do now?

I’m many types of geek, but comic-book geek isn’t one of them, so I think “With great power comes great responsibility” comes from Spiderman, but you’ll have to correct me later. The world has improved somewhat since I was a pre-teen who was convinced she was a monster. Society is getting more used to the idea that we are actually people. Even so, we’re still compelled to sanitise our stories, or conceal them altogether. We simplify things for the gender and sexuality muggles. We tell our doctors what they want to hear for fear of gate keeping. When getting my psychiatric approvals for surgery, I asked them not to mention that I’m a lesbian in the letter, in case my surgeon might use that as grounds to decide that I wasn’t trans enough to receive treatment. We tell our families and friends that ‘yes we are absolutely sure that there was never any doubt in our minds’, less we fuel the doubt in theirs.

I sometimes I wish I could go back in time twenty five years or so, sit down with that terrified ten year old, and reassure her that there’s nothing wrong with the way she feels. And then give her some awesome stock tips. I don’t think its going to happen. Thirty five year old me is even less optimistic about her chances of building a time machine than ten year old me was. But there could be another ten year old out there right now, convinced that the future she wants isn’t an option. I can try to be the role model for someone else that I struggled to find for myself. I can use the privilege I have to advocate for and amplify the voices of more marginalised trans people. But I can’t do those things if I stay invisible.

I’m a regular in this audience. Every month eager to listen to the diverse story tellers that Maeve has curated. And from every one I have found something worth holding onto, some facet of the story that resonated. Being here has highlighted the importance

I’ve sat in this audience, at least a dozen times now, listening to the many and varied speakers. Delighting in the diversity, revelling in the range. And in every tale, finding something . Being here, among these wonderful people, has made me recognise the importance of the raw truths of our stories. Not just the ones told from this microphone. It’s the stories that will be shared in the aisles during intermission, in the courtyard after the show, tying our heterogeneous, not-so-heteronormative community together. It’s a cloud of Tumblr posts and tweets. And it’s the new stories that might come to pass, when some scared person stumbles across the right stories and recognises that they are not alone. That they are not a monster. That they don’t have to hide who they are from the world. That -maybe- they don’t have to be invisible.