Ellen shares poems from their most recent collection Throat, along with insights as to their creative process and inspiration for the work.

Ellen van Neerven is an award-winning writer, editor and educator of Mununjali Yugambeh and Dutch heritage with strong ancestral ties to South East queensland. They write fiction, poetry and non-fiction, and play football on unceded Turrbal and Yuggera land. van Neerven’s book, Heat and Light, Comfort Food and most recently Throat have won countless awards. They are the editor of three collections, including the recent Homeland Calling and are co-editing an upcoming collection of speculative fiction Unlimited Futures with Sudanese multilingual writer Rafeif Ismail. 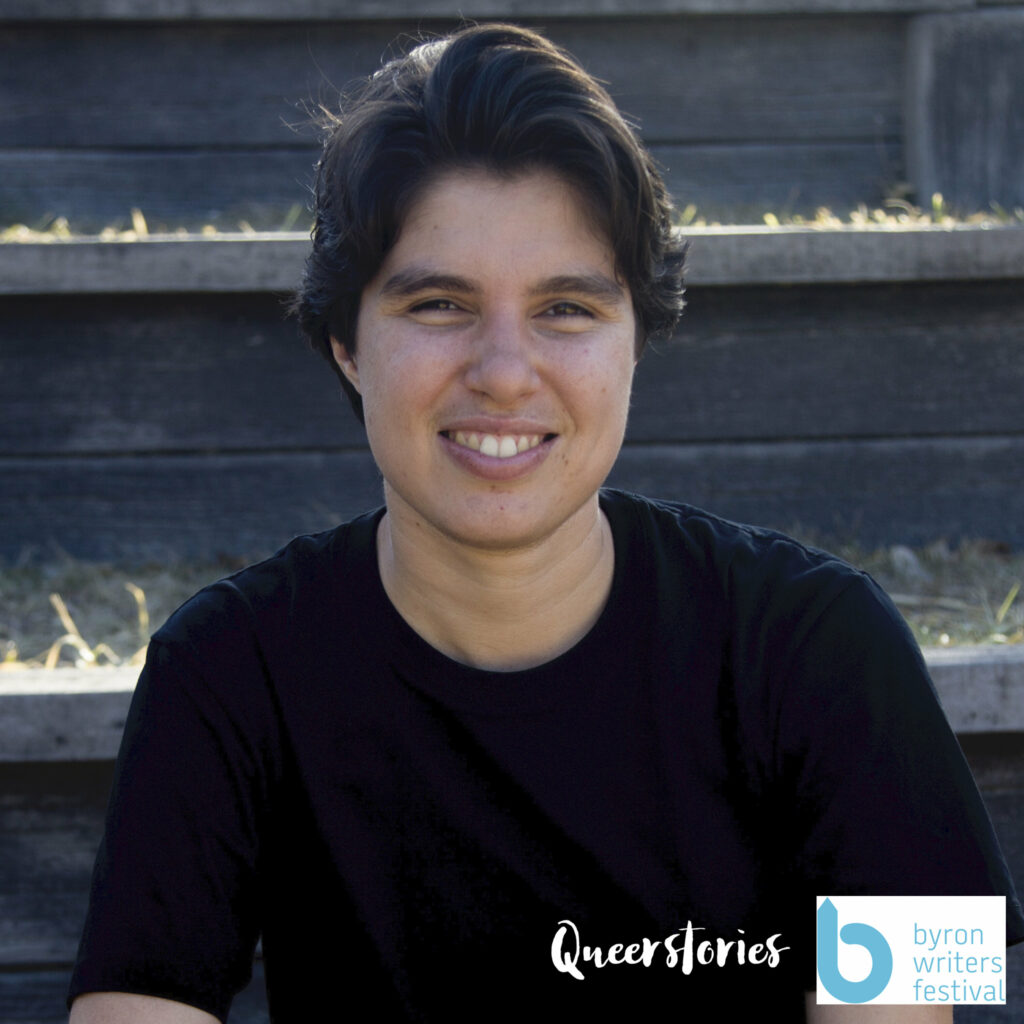 This episode was recorded in partnership with Byron Writers Festival. I was meant to be hosting a live event up north but due to Covid restrictions that obviously couldn’t happen. However, with support from the Copyright Agency’s Cultural Fund, we recorded a very special Byron Writers Festival Queerstories podcast. And you can enjoy the whole thing as part of their Conversations From Byron series at byronwritersfestival.com or you can listen to the stories one at a time here.

I’m on Yuggera and Turrbal jagun and I’m Mununjali from the Yugambeh language group, which for those of you who don’t know, is the Logan, Gold Coast and Scenic Rim region of Southeast Queensland.

I’m going to read to you five poems from my new book called Throat, and I’m just going to give you a little bit of context to the book which was written over a four-year period. Two of those years I spent in Naarm on Kulin country and the other two were back home on Yuggera and Turrbal country in Brisbane.

I had some amazing experiences in Naarm but I felt quite homesick and I had a tendency to be hard on myself. Whenever I felt depressed or homesick, I thought about my spiritual connection to Country and how nothing can ever take that away, because it’s inside of me. I thought about the rivers, particularly Maiwar, Brisbane River, and I thought about the mountain ridge out Beaudesert way, I thought about the storms and winds and rains and the earth and the trees and the birds, and I found my way back.

The title of Throat comes from a quote from the Black British poet Patience Agbabi. I love Throat as a title because it can symbolise more than just one thing. Throat can be like your power to speak, throat can be about pleasure, throat can be about pain, and I was also thinking about the black-throated finch which has been a symbol for the fight against the Adani Carmichael coal mine. It’s a beautiful bird which is already endangered and has already lost 88% of its historical range. It’s that threat that’s constantly there. Environmental themes, I write about these strongly because if Country is not healthy, we are not healthy.

This book has five sections which is really important to sort of note. The first section is called ‘they haunt-walk in’. Now I’m sort of taking cues from two writers, Qwo-Li Driskill, who’s a Cherokee Two-Spirit writer that talks a lot about haunting, and Blood Memory which is inspired by Natalie Harkin which those of you will know is a queer Narungga writer from South Australia. Ancestral memory is what I really draw in in this particular section and just how present it is in our bodies, and how memory can be both comforting and painful.

I’m going to read you a poem called ‘Vinegar’. This poem refers to cleaning as a sort of site of violence for racialised people.

So often us as First Nations peoples and I think Claudia’s talking about Black people in American and other racialised groups like First Nations Americans, we are studied and we are pulled apart but what critical race studies is doing is sort of turning it upside-down and looking at whiteness, looking at white supremacy, white privilege, white guilt, and I wrote some of this section when I was in Europe and saw how extractive colonialism made Europe what it is today. And I wrote this poem while I was in this really extravagant pool in Munich, in Germany. And just thinking about the kind of wealth that had been stolen to build a building like this.

The body labours under memory

All the spit in the world
in this pool
especially mine

The third section, ‘I can’t wait to meet my future genders’, talks about gender as a colonial construct. I really see my gender as fluid and I embrace that, I celebrate that, but there have definitely been periods of confusion and I wrote this poem, ‘Dysphoria’, when I was feeling kind of like an alien in my own body, feeling like I wasn’t good enough, I wasn’t one or the other and that made me feel kinda weird. And of course being in relationships, you have to negotiate your body with another person and that can be quite triggering.

liberate love
into dust
shifting, self-gearing
love them all
credit me
do what makes you happy, she says
but doesn’t mean it in the way my mum says
the desire to take clothes off
to take them off but also take
off another level underneath
peel away those expectations
get closer to my truth
I love my mind but I haven’t come to terms with this
I catch you in an embrace with another part of me
looking backwards
into dust

I want so much more

Tell me what happened at the opening

What does it mean to be held
in another
tongue

The tongue leads us to the last section of my book, which is called ‘take me to the back of my throat’. Saying take me to that dark, vulnerable place, I’m ready for it, I’m ready to tell you all my secrets. Honouring and truth telling. And saying that if you want to come on this journey with me and be vulnerable with me as a reader, I have to be vulnerable as a writer too. So this is a very small poem. It simply goes: