This week – Elizabeth Humphrys is an academic at the University of Technology in Sydney. Academics are good at Queerstories because they’re used to addressing a rowdy crowd. She researches work, trade unions, and social movements. Elizabeth grew up in a working class family in Werribee, Melbourne, and has been temporarily living in Sydney for the past twenty years. She is an AFL obsessive and Stupendous Bisexual. Elizabeth Humphreys.

Okay. I have spent the last twenty years in Sydney, temporarily. In a moment of divine return though, in 2001, I moved back to my home of Melbourne for ten months. As a way of greeting me for deserting the city for four years, I was outed by Andrew Bolt in the pages of the Herald Sun.  This story starts the year before my return, though.

As the last century closed, radical protests broke out internationally. The Global Justice Movement railed against the impunity of governments and the wealthy, seeking to shut down organisations like the World Bank. In Melbourne, September, 2000, I joined twenty thousand other people and blockaded the Crown Casino, where the World Economic Forum was meeting.

A wave of social movement activity followed the protests, and this included the formation of a number of radical queer groups. By the end of the year, I had moved back to Melbourne from Sydney and I was an activist in a small organisation called QUEER — that is QUEER in capital letters, and it was an acronym, and the name will just roll off the tongue: Queers United to Eradicate Economic Rationalism.

QUEER emerged out of the recognition that sexual identity was inseparable from the broader structures of capitalist exploitation, and we organised various actions and demonstrations.

On the 6th of June, 2001, members of the group dug up the flowers from the Melbourne Floral Clock opposite the Arts Centre, and replaced them with white crosses as part of a series of mobilisations called D-Day. We were calling for low-cost generic drugs to treat HIV in the developing world, as well as for the provision of services locally. We were also reenacting a protest that had taken place on the same day ten years earlier at the height of the AIDS crisis, when members of ACT UP Melbourne campaigned over delays in medication approvals.

Our action, in the early hours of the morning was filmed, duplicated on video and sent to every major news outlet. Key fountains around Melbourne were dyed blood red. I didn’t participate in the digging up part of the action, but the D-Day press release was put out with my name on it.

At about 5 A.M. that morning, the phone calls from journalists started, and it soon became clear that something  had gone wrong. While rushing around in the dark, one of the activists had accidentally dropped a spade on the antique arm of the floral clock, and in the process done thousands of dollars of damage.

As you can imagine, the media narrative was something balanced.

And, along the lines of “Out of Control Queer Anti-capitalists Want to Steal your Children and Burn Down Your House.” Now, of course there is no way I would voluntarily speak to Andrew Bolt, and he probably knew that, so he sent two slippery reporters to do his dirty work.

The next day, an article in the Herald Sun stating, “QUEER spokesperson Elizabeth Humphrys has refused to condemn the property damage to an historic landmark.” Now, I know the phrase, “In Andrew Bolt’s defence… ” was not one you thought you would hear tonight, but in Andrew Bolt’s defence… he probably didn’t know he was outing me.

The previous year, I had told my mother I had a girlfriend and so I was basically out to her and to all of my friends and colleagues, but given I was single at the time of the floral clock protest, it hadn’t quite occurred to me that being a spokesperson for a radical queer group might result me being outed to the rest of my family and everybody they knew in major newspapers.

I wasn’t really in the closet, and my family are not homophobes, I just hadn’t quite got around to certain things in my twenties, perhaps because of the whole activist trouble making process I’d got caught up in general. But I was also undoubtedly just not quite sure how to articulate myself as a bisexual to others at that point.

The next month, I took part in a debate on Bent TV with younger and older activists about whether queer activism needed to be anti-capitalist or not. This also resulted in several friends of the family calling my mother, not in a particularly hostile way, to ask if she had seen me on Channel 31 talking about overthrowing the system, “with the other gays.” To be honest, I remember being most shocked that people were actually watching community television.

I haven’t been involved in much of this kind of activism in recent years, in part because the world around us has changed. The terror attacks on September 11 the following year, and many years of war and refugee persecution have trampled into the dust the idea that another better world is possible in places like Australia and the US. And in terms of our own community, radical agendas were slowly replaced by more conventional goals like marriage equality. My preference is for a radical agenda, though. That didn’t stop me from being as elated as anyone else when the Yes vote was announced. In fact, I think in the biopic of my life, where I’m sure I’ll be played by bisexual Queen Drew Barrymore, this period will be known as my Crying Bisexual Tears on Public Transport chapter.

Now, this chapter encompasses essentially the last two years from the start of the AFLW Women’s competition in early 2017, which really kicked off my public emoting, through the marriage equality vote – more tears – up to the successful Irish Abortion Law Reform Referendum last month.

Now, some of my other close friends were also caught up in this Public Bisexual Tears phenomenon. I don’t talk about being bisexual and its complexities and exclusions really much at all outside of a Facebook group chat I have with four other women. I met this group through Twitter – that is Twitter back when it was good – largely because we were all into radical left politics and amateur-hour powerlifting.

We call our daily chat Thirst Club. It’s been going for about three years. I was unsure how to describe the group for tonight, but we workshopped it and this is what I have come up with:

“Thirst Club is a collection of the five best bisexuals you’ll ever meet, a pillar of support, a repository of thirst traps, and an up-to-the-minute record of all the best thirst content on the whole of Instagram. It features a regular segment of My Future Wife, which is, about half the time, us posting the latest pictures of the Williams sisters, Janelle Monae, or Lucy Lui wearing a suit. Thirst Club involves positive vibes, union news updates, and vicarious drama. Conveniently, it also includes proofreading and job application reviews.”

We also sometimes talk about the tensions and curiosities of bisexuality, and how that space is navigated.

I don’t want you to think that Thirst Club is some kind of bisexual separatist space, though. That part of the recipe was actually by chance. In other ways, we are diverse. We live in three difference capital cities, the oldest and youngest are fifteen years apart, and we come from different class backgrounds, different racial backgrounds, and in terms of the most important of identity difference amongst queer women, two of us love cats, two of us love dogs, and Evie loves the weirdness that is corgis. Zoe is more liberated from binaries than the rest of us: She has both a cat and a dog.

The fourth member, Frances, sent us her first ever nude last year. It was so good, we didn’t mind that she had accidentally she’d left a vacuum cleaner propped up enticingly behind her.

Our most recent addition to the club was asked to join after she posted a series of intoxicating thirst-traps and political posts on social media. This resulted in us temporarily changing the name of the group to from Thirst Club to Steph is Ace and I want to Kiss Her Club. We then invited her in.

Thirst Club sounds frivolous, but it’s been a really sustaining thing at a time of enormous personal challenges and change for each of the five of us. In my case, in the last year, I’ve ended a sixteen-year relationship, moved house twice, and was misdiagnosed when I had many pulmonary embolisms and could’ve easily not been here with you tonight.

It’s no exaggeration to say that, honestly, most days I’m just relieved to be alive. And through all that, there was the love, and the support, that is Thirst Club. I want to point out that in addition to the ability to marry being won recently that we also won that other inalienable human right – the right of us all to divorce. And after waiting the legally compulsory year, and paying a good whack of money to this state, this month I will also get to do that as well.

My girls in Thirst Club are organising a divorce party and you’re all invited. And, I was thinking about how I would end tonight. Unscripted. I thought, academics should end with intellectual content and quotes, and so I saw something that I thought you would enjoy. Captain Holt from Brooklyn Nine Nine.

“I think we can all agree, being gay is not a choice. It’s a game and we’re winning.” 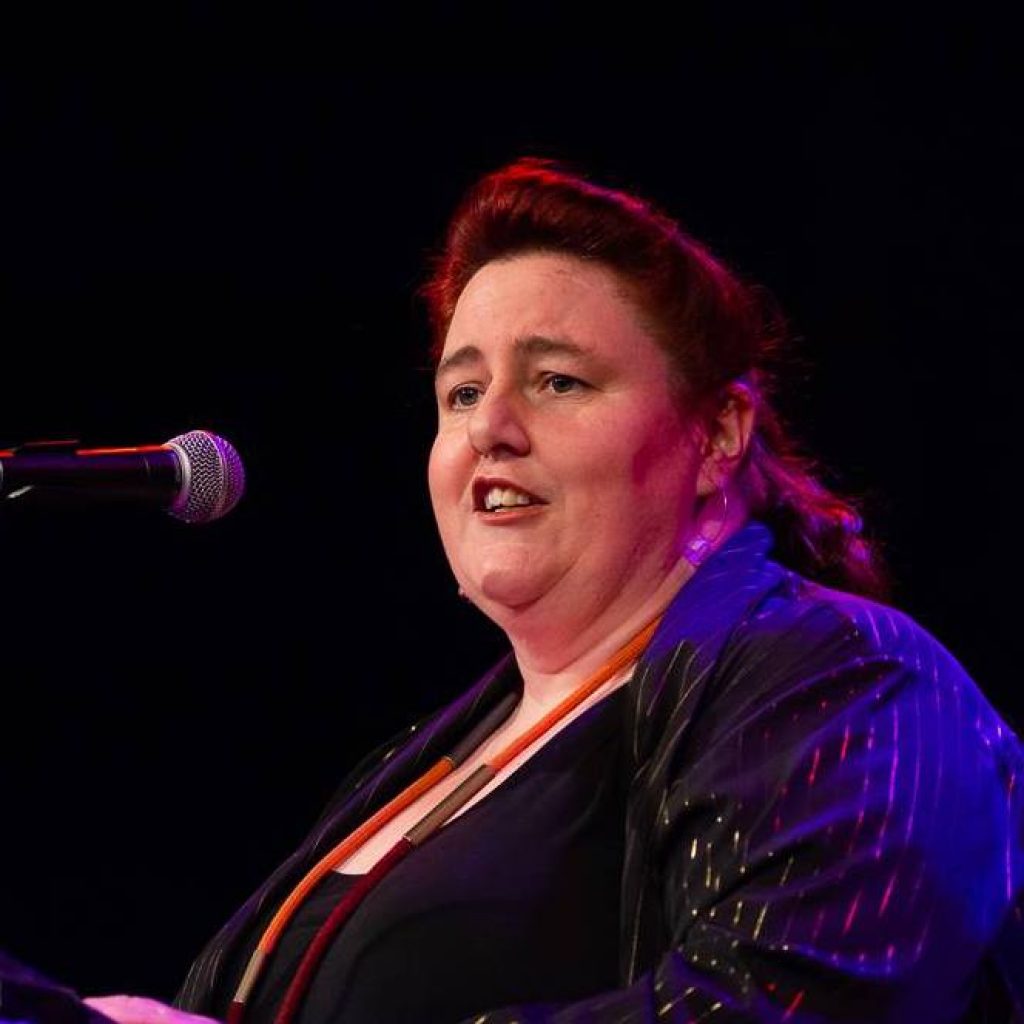