Elaine Castillo: Bi People Are From Earth, or Steven Yeun is Hot

Everyone knows bisexual people aren’t real and don’t exist, so for someone who isn’t real and whose existence is a myth, Elaine has nevertheless seen some bullshit.

Elaine Castillo was born and raised in the San Francisco Bay Area. She graduated from the University of California, Berkeley with a degree in Comparative Literature. She is a Voices of Our Nation Arts Foundation Fellow, and her writing can be found in Freeman’s, Lit Hub, The Rumpus, Taste Magazine, Bon Appetit, Electric Literature and elsewhere. Her short film, A Mukbang, was commissioned by the San Francisco Museum of Modern Art’s Open Space. America Is Not the Heart is her first novel. 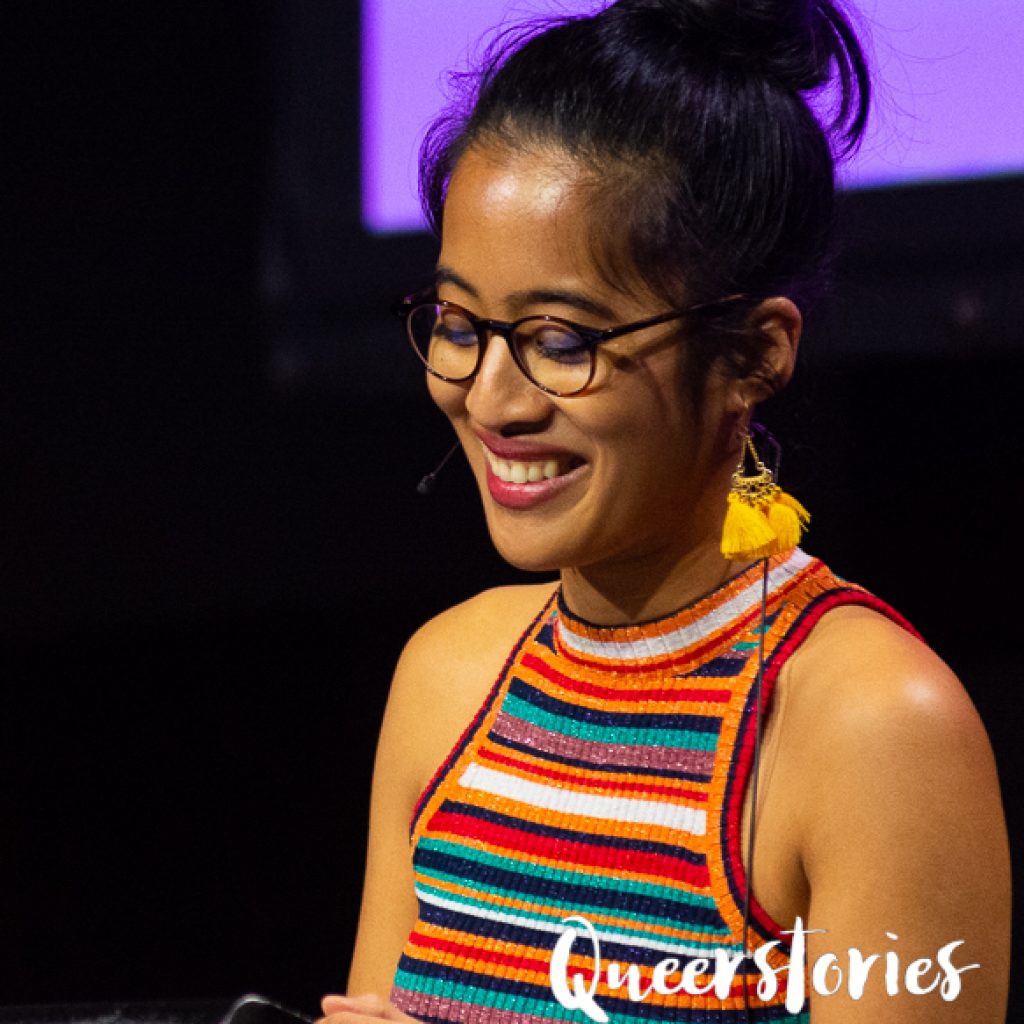 Elaine Castillo was born and raised in the San Francisco Bay Area where she graduated from the University of California, Berkeley, with a degree in Comparative Literature. America Is Not the Heart is her debut novel, and was named one of the best books of 2018 by NPR, Lit Hub, The Boston Globe, San Francisco Chronicle, The New York Post, Kirkus Reviews, The New York Public Library and many more. It has been nominated for The ELLE Award, The Center for Fiction Prize, The Aspen Words Prize, The Northern California Independent Booksellers Book Award, and the California Book Award. This story was performed at Queerstories for Sydney Writers Festival.

All right. So, I’m going to read something called Bi People Are From Earth, or Steven Yeun is Really Hot. But, boy, do I need to … Do people know who Steven Yeun is?

Oh, guys. Well, basically, he’s a Korean-American actor. He’s in this TV show that I actually have never seen, I think a zombie TV show, The Walking Dead. Have people seen this?

Okay, have that discussion amongst yourselves. He’s also in this anti-capitalist movie that’s based in the Bay Area by Boots Riley called Sorry to Bother You. Basically, he’s a Korean-American actor. That’s probably all you need to know.

So, everyone knows bi people aren’t real and don’t exist, so for someone who isn’t real and whose existence is a myth, I have nevertheless seen some bullshit.

We were all at a pub in New Cross, South London, a place that shits out hipsters faster than you can say Slavoj Zizek is a Wild Racist, which is actually a real-life story for another time.  It was one of these sloppy, grad student type of nights, and everything was very friendly until the white girls started touching my hair. Because up until that point we’d all been kind of floating this kind of benevolent drunken miasma of progressive radical anti-racist queerdom. And we were talking about, I don’t know, diversity in media or something. And then this one girl went full Nicholas Cage about how much she loved Asian hair; like that’s a thing that exists. I mean, it exists insofar as Asian food exists, which is to say generally it only exists for people who aren’t Asian.

When I’m drunk I can be somewhat confrontational, so I started out just by returning the favour. I thought I was going to very enthusiastically starting touching her hair, like the texture of this, the blonde colour of it. I really fascinated me. It didn’t. It did not.

Just to see what she thought of being on the other side of that attention. Obviously, that didn’t work. I think she thought I was flirting with her. I mean, I can admit I have made some bad choices about cis white girls to flirt with before, but this was not one of them.

The girl whose hair I eventually very suddenly stopped touching, she, at some point, said that her mother was born in Zimbabwe. And with very big, earnest eyes, she said that her mother thought white babies were ugly, that her mother taught her to adore, and respect, and learn – she said the word so fervently, it sounded italicised even in speech – learn from people of colour. Then, she said, “I’m mostly a dyke, but sometimes I like men, so maybe I’m more bi? But the only men I’m attracted to are men of colour, like Black men, Latin men, like, Asian men.”

“Is that problematic?” She asked.  She seemed to genuinely be interested in the answer, so I said…

Sidebar: Also when I’m drunk, I get very, uh, loudly infused with the spirit of Anti-White Supremacist Post-Colonial Rhetoric 101…

… which is one of the reasons I’m currently trying to be sober. Actually, no, not sober, trying to quit drinking. Sober, I mean, weed is legal in California where I live, so not sober, but I’m trying to quit drinking. There’s heaps of studies. There’s a University of Michigan study that says bisexual women are more prone to alcoholism than hetero and lesbian women. So, basically, I’m trying to try out a thing where I don’t regularly drink ten double Maker’s Marks on a night out, and end up a statistical cliché.

So, I said/slurred to the girl, “Look, liking who you like is whatever, but people of colour are often read as queer within white supremacist heteropatriarchy, because our bodies and sexualities – the very atomic fact of us – reads to, for example, a colonial mindset, as perverse deviations from normative bodies and normative sexualities, which is to say, white bodies, and white sexualities… “ I was very drunk.

She asked this like I was supposed to give her a ruling from the committee.

I mean, God, I’m fucking tired of the teachable moment, especially because if you happen to be a queer artist of colour, so much of your life and work is reduced to teachable moments, which is to say, “Teach me what it is to be Filipina.” I don’t know. Teach me what it is to be a bi woman of colour, teach me about the US colonisation of the Philippines, teach me about Duterte, and nurses, and immigration, and identity, and generally do all of that at the expense of being a person in your fullness, someone who doesn’t exist to educate, or prove, and would rather really just talk about Star Trek and doughnuts.

I mean, ultimately, I used to fall for it, too, because I used to bring out my little Rolodex of experiences, and break out the pictures of my dandy-butch days, and quote Sara Ahmed at the right people, and make sure not to talk about which dudes I found hot in front of certain audiences, and vice versa, but I just can’t find it in me to care anymore, I think especially if all that effort earns me is credibility in the face of some very extremely peak white cis queer women in a bad South London pub, who obviously had zero similar compunction about chatting up their Tinder filters.

I mean, ultimately, it’s rare and wild enough to love and be loved, and, yes, there are mysteries of desire, of encounter, of being a person taken wholly by a feeling. And those mysteries, yes, are woven into the very practical and material realities of living and loving in a white supremacist hetero-patriarchal society, which is to say it’s a reality where certain of my relationships are protected and enabled in ways that others simply are not. And, it’s one where I guess certain queer people live at intersections that other queer people, I guess, take Zimbabwean safaris through.

All of which is to say, the fucking teachable moment found me again, but now I think its message is this:

The actor Steven Yeun from the TV show I haven’t seen, The Walking Dead, and the pretty good movie, Sorry To Bother You, is really Hot. Thank you.