Dr Senthorun Raj discusses how his queer career as a glitter radiating academic lawyer began with childhood fantasies of being Xena and Sailor Moon.

Dr Senthorun Raj is a Lecturer in Law at Keele University and is passionate about glitter, pop culture, politics, and social justice. Sen’s academic and activist work takes an intersectional approach to addressing the ways law deals with the lives of queer minorities. He is the chair of Black Gold Arts and serves on the board of Amnesty International UK. Prior to taking up a lectureship in the UK, Sen was a Scholar in Residence at NYU School of Law’s Center for Human Rights and Global Justice and a Churchill Fellow. He has also worked as the Senior Policy Advisor for the NSW Gay and Lesbian Rights Lobby and served on the boards of Amnesty International Australia and ACON Health. 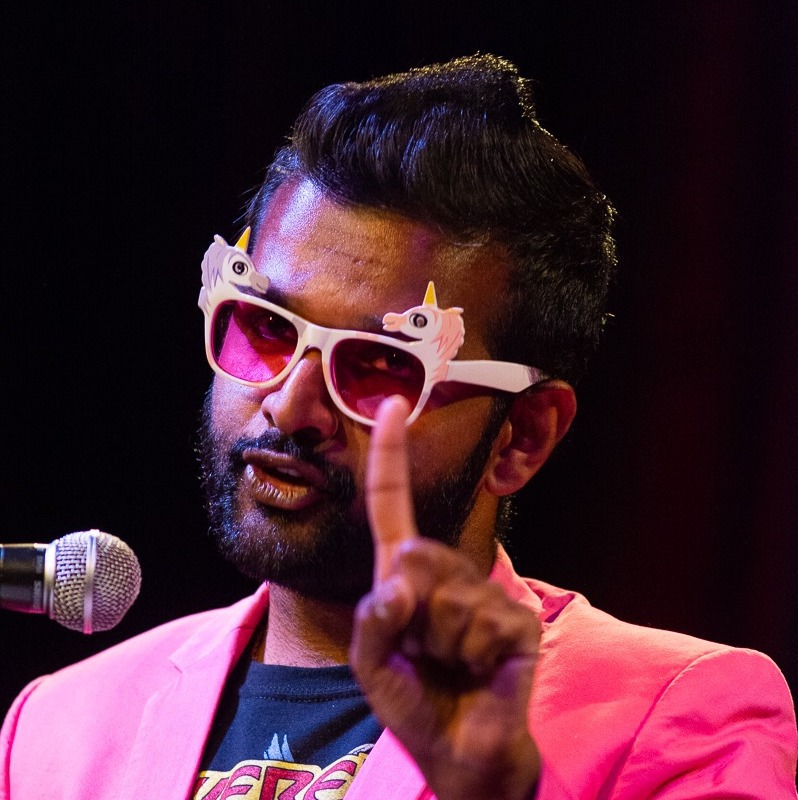 Dr Senthorun Raj is a Lecturer in Law at Keele University in the UK and is passionate about glitter, pop culture, politics, and social justice. He is the chair of Black Gold Arts and serves on the board of Amnesty International UK. Prior to this, Sen was a Scholar in Residence at NYU School of Law’s Center for Human Rights and Global Justice and a Churchill Fellow. He’s also worked as the Senior Policy Advisor for the NSW Gay and Lesbian Rights Lobby and served on the boards of Amnesty International Australia and ACON Health. Sen was visiting Sydney in August 2019 and so I snapped him up to perform at a Queerstories event. Enjoy.

Xena came into my life in 1996. I was 7. It was a Saturday night and I had turned on Channel 10 for the one hour of TV that my parents allowed me to watch on the weekend, they were really generous.

I was ill prepared for what would greet me that night. Leather boots. A metallic bodice. Long flowing black hair. It was as if the universe had captured all my prepubescent fetishes in a single character, one that I was blessed enough to stumble upon while carefully analysing the various synopses offered in the TV guide that night. Then she spoke. Xena’s voice was both serenading when Gabrielle laid her head on Xena’s shoulder and commanding as she mapped out the plan ahead to defeat the latest warlord who usually happened to have a sexy Kiwi accent. Hands up if you know what I’m talking about or happen to have a sexy Kiwi accent?

Okay, okay, I see a few hands. Okay. So Xena was filmed in New Zealand, so that’s why it’s relevant, I’m not just giving you some random information about my sexual proclivities. So, just putting that out there.

Well, for those of you who have never had the pleasure of watching Xena, most battle sequences would begin with Xena’s trademark war cry. I’m not going to do it for you.

I will fail miserably.

She’d do a few summersaults, several flying kicks, and offer a couple of sarcastic quips between punches. Fights often culminated with Xena throwing a stunning metal object called a chakram – like a deadly frisbee – ah, to, to knock out a bunch of boorish straight men. As you do. Um, and Xena would gracefully catch the chakram each time. There was never any collateral damage. And each episode would usually end with Xena and Gabrielle looking lovingly at each other before the closing credits.

Imagine having that life.

I did. Ah, and I knew what I wanted to be when I grew up: a Warrior Princess.

Right? I would frolic around the house in a white vest and underwear (which was my afterschool uniform at the time) ah, throwing CDs at the wall-

-hoping they would ricochet like a chakram and return gracefully to me. They never did. They just chipped the wall, fell to the floor, or snapped. Often all three. Ah, and my parents were usually not very pleased. Breaking all the software.

Um, but, Xena wasn’t the only show I watched back then. So, remember my super strict parents who thought TV would corrupt my soul, otherwise known as “academic potential”. I mean, Maeve did talk about ebing an overachiever and that comes from that. Well, on the weekdays, I was granted the privilege of watching half an hour of TV before school. This is how I discovered Sailor Moon.

So, I remember the first time I watched the show. It was 1997. I had just started Year 3. I was eating toast and watching TV, my usual routine before picking up my bag and walking down the road to school. As I flicked over to Agro’s Cartoon Connection –

Yeah, remember that? I was greeted by a wondrously colourful transformation sequence. Sailor Moon chanted “Moon Prism Power” and the screen zoomed in on her nails as they were magically painted pink and sparkling red lace swirled around her body to transform her from a dorky teenager into a powerful champion of love and justice who fights evil by moonlight.

Then Tuxedo Mask came into the picture. He was Sailor Moon’s romantic interest who had an uncanny ability to interrupt a battle sequence with a perfectly shaped single red rose. Oh, and you could always count on him to have an apt morally righteous monologue for the monster of the week. Check out YouTube for more details.

So, most days at school, I would imagine myself in those pink nails, tiara, and thigh-high red boots, which I may own now, waiting for Tuxedo Mask to come along. I would strut around the playground proudly. I was a Tamil boy with a Sailor Moon disposition.

My friend, Jon, would be Tuxedo mask. We would stake out a corner of the playground and re-enact the fight sequences from the episodes we had just watched earlier that morning. I was teased. But, I only gave about, you know, like half a fuck back then.

So, what do Xena and Sailor Moon have to do with my life now as a gay academic lawyer? When I think about where I am now professionally, my mind always wanders back to that couch, to those CDs, to the playground, to the TV I cherished in the mid 90s. In that time, I formed my sense of self by living through queer feminist pop culture and camp fantasies about being a leather-clad warrior glamazon like Xena and a crystal-carrying princess of the Moon?!

The legal profession, though, isn’t the most welcoming place for such fabulous fantasies. Holding onto magical career ambitions in a world that demands “seriousness” and “sensibility” once you enter the “real world” is quite difficult. This is particularly true if your parents have only given you two career options: doctor or lawyer. I picked the latter option. I couldn’t fight nor did I have any magic but I figured my ability to perform theatrically and aptitude for throwing shade would be best realised through advocacy.

So, you know, I was exhibiting such flair through advocacy just last month. I was strutting down Regent Street in London as Wonder Woman – I have mentioned already that I like female superheroes, right? Yeah. And I’m wearing She-ra right now –

And, when a journalist stopped me to do an interview. My body was washed in, of course, biodegradable glitter, and I had my rose-tinted unicorn glasses on and I was ready to rant as my lace corset tightened around my chest. I took that microphone and did what I do best: preach about why society should let LGBTIQ people thrive by ending laws that treat us like shit. You know, pretty basic. And I did my rant while sweating glitter.

You know, it’s one of my favourite activities. And that sweaty sparkle didn’t go unnoticed: the interviewer asked me to discuss my glitter routine, too. You know, my expertise in fabulousness was appropriately recognised. You can hear me talk more about glitter on that ITV’s Pride in London 2019 highlights. And that career achievement is now going on my CV under what we like to call “academic impact.”

So, I came here tonight to tell a story of how my career was shaped by queer fantasies made possible by two of my childhood camp superheroes. Then came Princess Tenko, Pokémon, Spellbinder, Buffy, Charmed, just to name a few of my 90s TV loves. I have separate, hilariously banal fantasies for each of those shows but that’s for another talk.

My parents also mellowed out pretty quickly. When I was in high school, I managed to convince them that I needed a TV to study. And it wasn’t actually a lie, cause I have a habit now where I keep the TV on in the background when I work, and luckily I have my own office, so it doesn’t bother other people.

But, you know, it was a new millennium. There were more camp shows. I could say I’d get better grades. And you know, ‘here to a nerdy future,’ I would say to them. And I was lucky, I got that TV. And I even wrote this speech while watching TV (well, it’s really Netflix now but you know, you get the idea.)

And, you know, I’m a morally righteous twat at the best of times. And any of you who have the displeasure of following me on social media, probably twitter, probably already know that. And I – Oh, oh, I should also point out that I say “twat” now instead of, like, “douchecanoe” because I do live in Manchester and I’m trying my best to become a Mancunian. You know, fit into that English life.

So, you know, true to form, let me finish with a prescription for pop culture: go watch some Xena and Sailor Moon. Your life will be better for it. And I wouldn’t be the gay male ethnic version of Elle Woods (see yes, I know that’s a film reference from 2001 but also notice the pink jacket) sashaying away from you right now if it weren’t for those fantasy-inducing 90s tv shows.

So, thank you for listening and feel free to send me feedback using only memes.