David Marr tells us how the inescapable truth finally dawned on him one day late in 1975.

David has won four Walkley awards for journalism in his 45 year career. He’s now at Guardian Australia and is widely regarded as one of Australia’s most influential commentators. 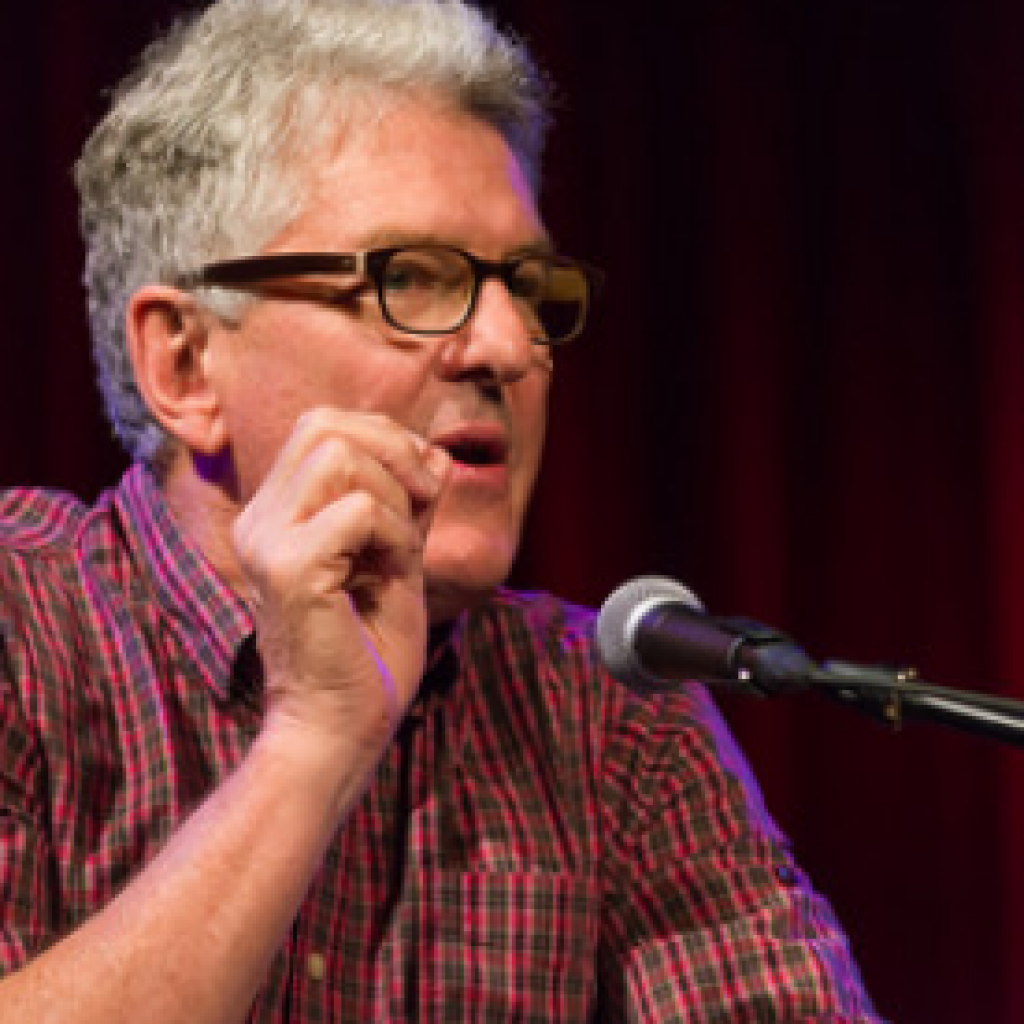 Hi. I’m Maeve Mardsen and you’re listening to Queerstories- the podcast for the LGBTQIA storytelling night I host and programme in Sydney and Melbourne. This story was recorded at Giant Dwarf, as part of my monthly Sydney event. Next up – David Marr. David has won four Walkley Awards for journalism in his 45-year career. He’s now at Guardian Australia and is widely regarded as one of Australia’s most influential commentators. I try to discourage Queerstories performers from writing about coming out and equal marriage because these topics are covered so widely in the media. That said, I think David’s take on marriage in this story is just perfect.

I am, of course, cock-a-hoop about the Marriage Amendment Act. Couldn’t be happier. I wept on television. How good it was to see the last division in Parliament that afternoon – the Yes side of the House as crowded as the Royal Easter Show of my childhood, and on the other side, the No voters; four lonely figures. In all the months of blather that we had been through, and in all the months of blather that lie ahead, let us never forget the sight. The forces we are up against can be counted on one hand with a thumb to spare.

By late that night, my man and I had been offered a cake, a venue, and a DJ, but we’re holding back. We have no immediate marriage plans. I’m not proud of the reason for this. It’s not just the embarrassing prospect of Sebastian and me kitted out in matching tuxedos: The buttonholes matching, and the smiles matching. Why do same-sex couples feel they have to match? Sorry. It’s a fashion point, I suppose. It’s just that I am terrified of the ceremony itself.

You see, I’ve been married, and that midwinter day in Queensland in 1975 remains the most bizarre day of my life by a long, long way. The day I came face to face, not before time, indeed a bit late, and not without chemical assistance, with the Inescapable Truth. And, I should tell you that they’re capped are I: Inescapable. T; capped T: Truth.

The wedding was, at my insistence – because I was a bit embarrassed about the whole thing – a small affair. Just a few family and a few friends at a weatherboard church in Montville, which, in those days, was a pretty village on a high ridge – a detail that matters – a high ridge behind the Sunshine Coast. It was not in the usual way a traditional Australian wedding; a traditional in the sense that the Best Man is deeply in love with the groom. Who in this room has not heard stories of the last nights of grooms and best men together in motel rooms before the ceremony? Who has not noticed the sidelong glances from best man to groom, glances aching with regret, as they wait together for the last time at the alter for the arrival of the rather intrusive bride?

In my case, that probably was more on the groom’s side; it was me.

While it went well, the day went perfectly. The ceremony, the photographs, lunch – absolutely delicious – and then about three o’clock, the family disappeared leaving Jenny and me with half a dozen friends on the veranda, of what real estate agents these days call “a Queenslander” – to enjoy the view, the afternoon sun, and the wedding presents.

The music, the tee shirts. Indeed, in so many ways, it was starting to seem old fashioned. What we didn’t know then was that at the height of the Cold War, the CIA had conducted two secret investigations – Project MKUltra and Project MKDelta – to investigate rigorously the possible use of LSD as a weapon of torture, and as a truth drug. The aim was to break prisoners, Commie prisoners, as a Red Tide threatened to sweep across Asia, but the result after years of scientific research was to abandon the pursuit. The CIA concluded, LSD, by disrupting defensive patterns may sometimes be helpful in the interrogation, but even under the best conditions, it will elicit an output contaminated by deception, fantasy, garbled speech, et cetera. No such magic brew as the popular notion of truth serum exists. All I can say to the CIA at this distance is, “You didn’t ask me.”

Jenny, my wife of a few hours, had an old friend who had turned hippie and was living in the Dandenongs. She came to the wedding, not with tea towels Georg Jensen spoons as gifts, but a little LSD for the bride and groom, and indeed for the bridal party to while away the afternoon.

Like marriage itself, LSD was a first time for me. My wife’s old school chum called the little shards of gelatine that she handed us, ClearLight. It was, “Just a taste,” she said. “Just a taste.” And how perfect that name seemed when, after a little, the sun paused in its path to illuminate the landscape spread below us, to stroke the little towns and cane farms, the remnant patches of forest and the distant sea with a soft yet intense light…

..a quality of light I’d never noticed in my life, certainly never looking down on the Sunshine Coast from the heights of Montville.

I have an unfortunate habit of pointing out beautiful things to anyone in my near vicinity in case they miss them – beautiful landscapes, beautiful paintings, beautiful everything. It’s a compulsion, perhaps a little vain, that I can’t fight. It’s an irresistible need within me to lend my eye for beauty to everyone around me… Uninvited.

“Look at Nambour,” I said, “It’s so beautiful.” And there was gentle, knowing, experienced laughter along the veranda. Not yet celebrated as the birthplace of Kevin Rudd, but with the-

.. the sugar refineries still belching smoke into the late afternoon air, Nambour seemed, at that moment, ravishingly beautiful in the distance. And then came the moment of truth. I had been married not five hours, and with perfect clarity – yes, chemically assisted clarity – I knew that what I had done was wrong. Marrying was a mistake, and despite this devastating insight, I felt absolute calm, almost relief as the certainty of my blunder settled on me.

Researching this speech, I was determined not to be merely confessional tonight but to be scientific. I came across the words of the American psychoanalyst Sidney Cohen. You’re probably familiar with his work. He was an early LSD researcher and mate of Aldous Huxley, who captured exactly my mood late on my wedding day. And, I quite, “The problems and strivings, the worries and frustrations of everyday life vanished,” he wrote. “In their place was a majestic, sunlit, heavenly inner quietude.” Exactly! And, a heap of trouble.
The only drug I recommend to anyone is Panadol.

I could never endorse LSD, not after all I’ve read and after my go in Montville forty years ago. I didn’t have terrifying hallucinations. I didn’t see the world ending in a rain of toads. I didn’t jump out a window. I faced the truth that I was queer. It would have come, of course, but did it have to come on my wedding day?

Jenny and I split up. It was awful. Twenty years later, almost to the day, I met my man – not the first man in that time, of course, but the perfect man has been my partner ever since. We backed equal marriage, of course, and when the bill went through, everyone assumed we would be we’d. Friends want a party. Be very suspicious of friends who urge a wedding.

They want the chance to give speeches, to rake over old catastrophes in, of course, the most loving way. I would ask my old Best Man to be Best Man again. We’re still great friends. I would insist on gifts.

But then I think of the last time and I hesitate. That old Queenslander has long gone, demolished to make way for an unbelievably ugly shopping centre. Jenny has died. Nambour remains, of course, as ugly as ever, and oddly that evening when the vote came through, images of Nambour came into my mind.

And they pop up too often when I think, “Should I be getting married again?” Sebastian isn’t keen. “We’ve had our ceremony,” he said. And that’s true. A couple of years after we met – this is nearly twenty years ago – we were on the dance floor at Mardi Gras, and who spoke first, we can’t now remember. But with the perfect sobriety that comes at about 3 A.M. at Mardi Gras…

..one checked with the other. “We’re married, aren’t we?”

In front of a few thousand friendly witnesses, we agreed we were, and we’re still married. I proposed, of course, in all the euphoria once the law was passed, but Sebastian countered with the suggestion we renew our vows, and how wonderful that would be. It’s 2018, and I’m a bit old these days but I can still go dancing.