David Cunningham: The Mayor of Biggercity or R U Chub?

Too fat for Grindr, David Cunningham shares his odyssey for online acceptance.

David is a writer/researcher on ABC TV’s The Checkout, who occasionally plays large men in top hats, togas and so on when no one else is available. He was the runner up in the Raw National Stand-up Comedy Competition in 2008, and occasionally can be found doing stand-up around Sydney until it gets too much for his knees.

For leisure, he is in his ninth year of not-quite-failing a history PhD about tensions in cultural representation of naval officers who were also members of parliament between the Glorious Revolution and the fall of the Walpole Ministry. He also lovingly tends royaldayout.tumblr.com, where members of the royal family are fondly miscaptioned.

David Cunningham will be featured in the new Queerstories book which can be pre-ordered on Booktopia. 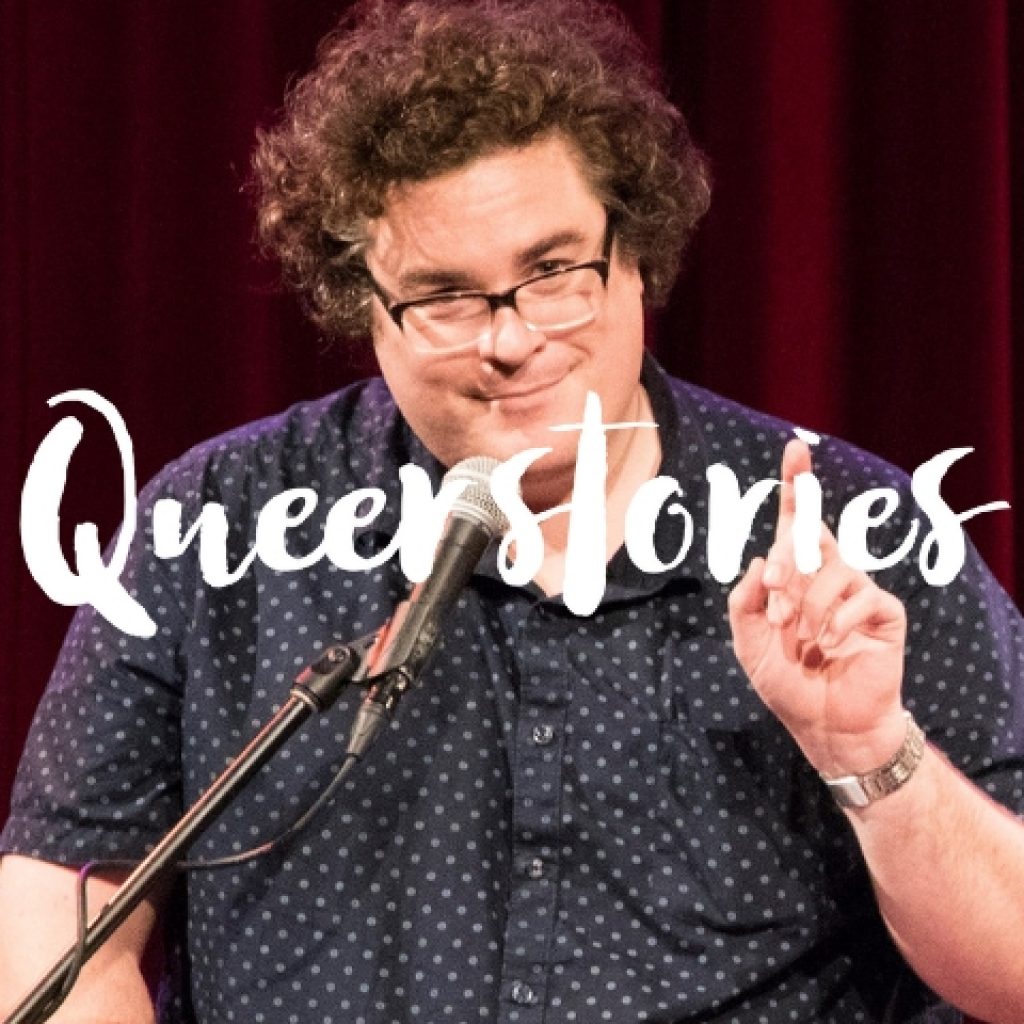 Hi I’m Maeve Marsden and you’re listening to Queerstories. The podcast for the monthly LGBTQIA storytelling night I run at Giant Dwarf in Redfern with support of the City of Sydney.

Friends, I will confide a secret to you- I am that fat man. Oh my god what a twist!

I swing up and down through a range of about 50 kilos, and currently tip the scale at 134.6. If you have an historical frame of mind as I do, ignoring the decimal point turns that figure into a year, so at the moment I weigh 1346 or the Battle of Crecy- where’s my Black Prince? History joke. Hopefully I don’t fall too much further into the Hundred Years’ War- it’s a lot of pizzas to Agincourt. When I lose weight, it becomes a journey back through time. Not to the fall of Rome, that’d be too far, but I’ve been down into the golden age of Byzantium and the Abbasid Caliphate a few times before. About the death of Charlemagne in 814 would be the sweet spot.

Many of us queer people struggle with the baggage as well as the celebration of our difference: witness our depressions and our addictions.  I happen to eat my feelings, and as you can see, I am a man of sentiment. Apparently it all began in 1987 when at the age of two I asked santa for a packet of salt and vinegar chips for Christmas. Santa delivered. It only became clear with puberty and then cranking the diallup modem to create my first dating profile on the the now defunct website www.gay.com (they were simpler times), that I realised the romantic costs that leaning on that squishy emotional crutch would incur. There was an excellent recent article on the epidemic of gay loneliness by Michael Hobbes which posits that anyone who deviates from the white gym-toned mainstream image of the perfect gay will face either rejection- everyone with grindr has seen the profiles that say no asian, no indian, no femme, no chub- or being fetishized. The most common opening gambit I meet with on grindr is “R u chub?” “Well, I’m David-” “R U Chub?” “Well look I’m really more than my-” “R U CHUB or R U NOT CHUB?” It’s good to sort these things out early. If we merely fuck bodies rather than  have sex with people, we reduce each other to human fleshlights.

There’s always Growlr, which feels less mercenary than grindr, but the bear’s cave is not without oddities. Rather than winks or likes or growls as you might expect, people send each other woofs?  It’s a zoological mess! Now I’m not really hairy enough to pass as a bear, and alas my scheme of breaking into a hairdressers’ after hours in my undies, slathering my tummy in glue and rolling around on the floor proved impracticable.  My particular subspecies of ‘the Babar’ is yet to find its true place in the sexual men-agerie. While the pups, cubs, wolves, bears and otters frolic in the growlr zoo, I fear that in their company this babar would have aged into a dignified but solitary Cornelius. It was a very good show. I could of course imitate the gayest of all the animals, originally hailing from south america, the hard-shelled and snuffling amyldildo, but it leads a lonely existence.

And so I tried Biggercity.com. Unlike other sites where you join as a member, on Bigger City you are a citizen. I considered running for mayor. The 7XL Sash is really a privilege. Its scene in Sydney is really too small to be viable, but I actually had a few reasonable dates off it in London. The compliments were curious though. Not that I had a nice smile or a cute laugh or warmth or kindness but that I was blessed a great pair of moobs that men would want to knead like a baker cupping sourdough, or that I had a passable starter belly, which with enough hard work and application could be trained up into something a chaser could really appreciate. Too stout for grindr, it turned out I was too slender for biggercity, and was really going to have to take obesity more seriously to reach the coveted status of the superchub, the only hero with diabetes and ruined knees. Strolling the very wide boulevardes of Biggercity, I was only likely to meet someone who would feed me to death, for which I require no assistance.

I don’t know how much of an issue this is in the rest of our great acronym, but the expectations gays so often put on each other to fit prescribed categories can make our online dating an unwelcoming place. There’s definitely something to be said for the frisson of meeting someone organically in person, but even then the insistent intrusion of technology into queer courtship and its rigid categories helps form the subconscious expectation that there must be a downpayment of abs as a deposit on being noticed. I’m guilty of it as much as anyone, and have unfairly judged people for their appearance, feeling in my younger years that intelligence or humour should earn me someone fitter or more attractive than myself. But it turns out there’s no universal human right to a hottie, at least not while my draft convention keeps being blocked by the Insecurity Council in my head. If we’re driven to approach sex as something to be done with a body, however fine, without regard to the mind and soul that dwells within it, at the end of the day it’s just wanking into a person. It need not be this way. I have a dream, that we will one day live in a community where a man will not be judged by the colour of his stretchmarks or the heft of his belly, but by the content of his character, and maybe the control of his gag reflex.