Hi. I’m Maeve Marsden and you’re listening to Queerstories – the podcast for the LGBTQIA storytelling night I host and program in Sydney and Melbourne. Next up – Davey Thompson is an   Inningai, Bidjara, Wakka Wakka, and Gubbi Gubbi man from a small town named Barcaldine in Queensland. As a child, he wished to grow up and become Princess Leia, who taught him to strangle his oppressors with the very chains they put you in. He moved to Brisbane via Bundaberg to study at the Aboriginal Centre for the Performing Arts, and has since worked behind the scenes for the Queensland Performing Arts Centre, Circus Oz, and Guesswork Television.  Davey is also a writer, activist, host of  Urban Dreaming on JOY 94.9, and MC of the Australian chapter of the Cocoa Butter Club. Davey performed at Melbourne Queerstories at Howler.

I would like to share with you the story of how I met my best friend, the craziest but most amazing person in my life. My name is Davey Thompson. Through my grandfather on my father’s side, I’m Bidjara and Inningai. Through my grandmother, I’m Wakka Wakka and Gubbi Gubbi. My mother is White Australian, and that’s cool. She can’t change that.

That makes me White, too. I grew up in-between cultures. For me, the talks of reconciliation and treaty didn’t quite make sense, because I am literally living proof that Black and White people actually can get along. When introducing myself, I always lead with my cultural obligation of announcing my Aboriginal connection to this land. Before colonisation, when mob would move through these lands, they would announce where they came from, and their intentions while visiting or passing through. It’s sort of like stamping your passport. In saying this, please don’t think that I ignore my White heritage in any way. I acknowledge it in the same way all White Australians heritage the same way all White Australians do. Silently.

Siliently until we’re in the middle of a racial debate. But, you know, in those situations I’m not the person to point out my Whiteness. It’s always the White people that I’m arguing with who love to point out that I’m White, too. Sadly my Whiteness is only ever acknowledged to diminish me and my Black rage. Real comfortable in your skin, aye? My Black rage is fulled by White guilt. Don’t try me.

My family and I moved around a fair bit as I grew up. The awkward, flamboyant half-caste new kid was actually a label that I grew familiar with, and now I wear with pride. And, for the record, yeah, I grew up in the noughties, and everyone was calling me half-caste in primary school. I think it’s a combination of having Rabbit-Proof Fence being released and having a Prime Minister who got off on delaying the progress of reconciliation. I would thank him but then, you know, I’d have to say his name and he doesn’t deserve that, the bushy-eyebrowed fuck.

We were living in Barcaldine, which is traditional country for me through my grandfather’s side when my parents divorced. Oh, and while I’m on the topic of divorce, yay, we can do that now.

But, Central West Queensland wasn’t the healthiest environment for someone like me to grow up in, so I decided to move to Bundaberg with my mum.

The awkward, flamboyant half-caste new kid arrived at school for his first day. Let me tell you, I very quickly noticed that the number of students in my grade, alone, outnumbered my entire primary and high school cohort combined at my previous school. It was really overwhelming. It was halfway through grade 10, and I remember my entire year was gathered for assembly. I arrived late, no thanks to Barbara from the front office,

And because of Barbara in the front office, I had to do the longest, most awkward walk of shame in front of everybody there, and I found a little spot on the end of a row, and I just sat down, but everyone sort of shuffled out this No Go zone, you know, within five minutes, and that really showed me how popular I was already. After a few classes and then a lunch eaten alone, like Cady Harron in Mean Girls, that’s when I realised that Bundaberg was just as accommodating to queer people as Barcaldine was. Fast forward to grade 10 history. I can still see all of the tables and chairs sort of set up in this awkward square horseshoe shape. Everyone is sitting down and copying their notes about the Stolen Generation from the overhead projector. It was really sweet.

I was sitting near the door, head down, bum up. I wanted to make a really good impression. New school, new life. you know. It was really quiet, and then I just hear…

“Ring-ring. Ring-riiiing.” But it wasn’t someone’s phone. It was somebody half whispering it, half yelling it in a silent classroom. I looked up and there was this gorgeous, gorgeous, gorgeous wide-eyed Aboriginal Queen staring at me excitedly, holding her hand to her ear in the shape of a phone.

Honestly, I wasn’t exactly in a position to turn down a friend at this point. You know, what have I got to lose? I reached for my imaginary phone and I maintain eye contact with her, because she needed to know who she was about to fuck with.

*Imitates twangy, femme voice* “Hiii. Are you new here? Where are you froooom?”

“Yeah, I just moved here from a small country town, you probably wouldn’t know it.”

“I’ve actually been on a road trip all over Australia and I bet ya I could tell you where it is.”

Then, silence. She just stares at me. You can sort of see her eyes darting from left to right like she’s searching her brain for at least one of the six pubs that we’ve got, or maybe even the Tree of Knowledge. But nothing. I laughed at her and I said, “Maybe not all over Australia then.” She just brushes it off, and she’s like…

*Giggles* “Want to sit together at lunch?”

Lunch came about, and she grabbed my hand and dragged me to the hangout under D Block where all the Blackfellas were. You know that one spot in school where all the Aboriginal kids hung out? Okay, the room’s really quiet. If your school did not have one of these spots, do not engage with me about Aboriginal politics, all right? I’m making it known.

“Hey, everyone. This is my new friend.”

And from that moment on, we were inseparable. She would come over to my place at random times, and climb through the window, and help herself to the fridge, and then come and say hello. This one time when we were both working at KFC, she had a shift and she bought me a Works Burger. You can’t get them here in Victoria. A Works Burger with double bacon and double pineapple, and she dropped it off at my house. It was so great because I lived around the corner from the KFC in Bundaberg too. Yeah, it’s just as good as what it sounds too.

We both had identical grades for Year 12 Maths. It was a B – behaviour, and D for effort. That was probably because we spent most of our time with our heads on the desk listening to T-Pain, and the other half of the time was spent sitting just outside the classroom eating the Hungry Jacks that we’d wag school to go and buy. She was also the only person to come to my 16th birthday party. Okay, that’s a lie, there was one other person there, but we’re not friends anymore because she believed her boyfriend when he told her that I’m only acting gay so I could have sex with them.

I really, really wish that was a joke but that’s Bundy for you.

Through thick and thin, she’s always been there, even after the embarrassing public pranks we play on each other. We’ve not always been on the best terms and there have been a few public brawls between us, much to the delight of onlookers, of course. I’ve been told that we look like a UFC match between Beyonce and Halle Berry. I’ll let you think about that for a second. I’m obviously Halle.

It was yellow. It took me a really long time, but she taught me how to love myself; flaws and all. We actually have matching tattoos that say “Flaws and all.” I was really nervous, it was my first tattoo, and she talked me into it whilst we were still really, really, really hungover from seeing Salt n Pepa the previous night. I don’t regret the decision, even though I picked the first font that she showed me, and I just said yes as soon as the artist put it on my body. I didn’t realise it was on a skewwhiff angle. And the font that I approved, I have to say that I approved the font; she told me that. But, the font that I approved makes it look like it says, “Flayva and all” – F-L-A-Y-V-A. It’s so ’90s. I love it.

I probably could have been a lot more patient and thought through it at the time, but I really do like that skewwhiff angle, and that it’s flawed within itself. It makes the meaning so much more literal to me. I told her I just wanted the name of Beyonce’s song on me, but really it’s the life lesson that she taught me. I’m just keeping the notes in case I need revision.

We don’t really get to see much of each other these days, with my living here in Naarm – which is the traditional name for Melbourne – and her perpetual backpacker lifestyle across the most glorious parts of this continent, but we still talk every day. Every single day, she makes me laugh while keeping me on track to world domination. And she celebrates me in ways that no sane person would. One time, she actually got one of my bum pictures printed onto a t-shirt. It was a juicy pic’ too.

But every since then, she’s walked around nearly every town she’s visited with that shirt on, going, “Do you like what you see?” And if they said yes, she’d give out my Instagram handle, which is actually… Thanks! It does belong to me. She’s flat in the back, so don’t try and claim. She’s the Illana to my Abby, the Donkey to my Shrek, she’s the Luke to my Leia, and she’s the Queen to my Latifah. And I honestly couldn’t ask for a better friend, flaws and all. Thank you. 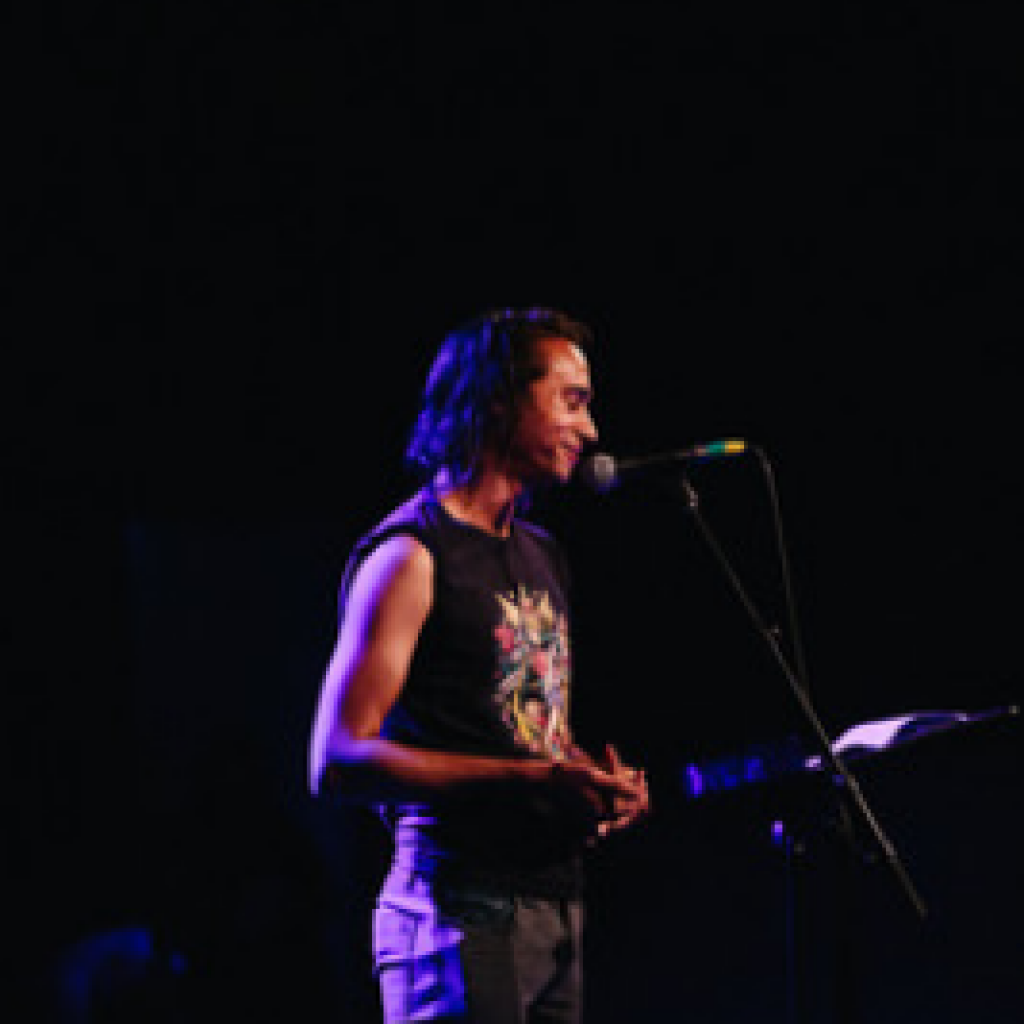