Clementine Ford: The Great Crash of 2012

Clementine Ford is a freelance writer, broadcaster and public speaker based in Melbourne. She is the bestselling author of the feminist manifesto Fight Like A Girl. Her most recent book is Boys Will Be Boys. 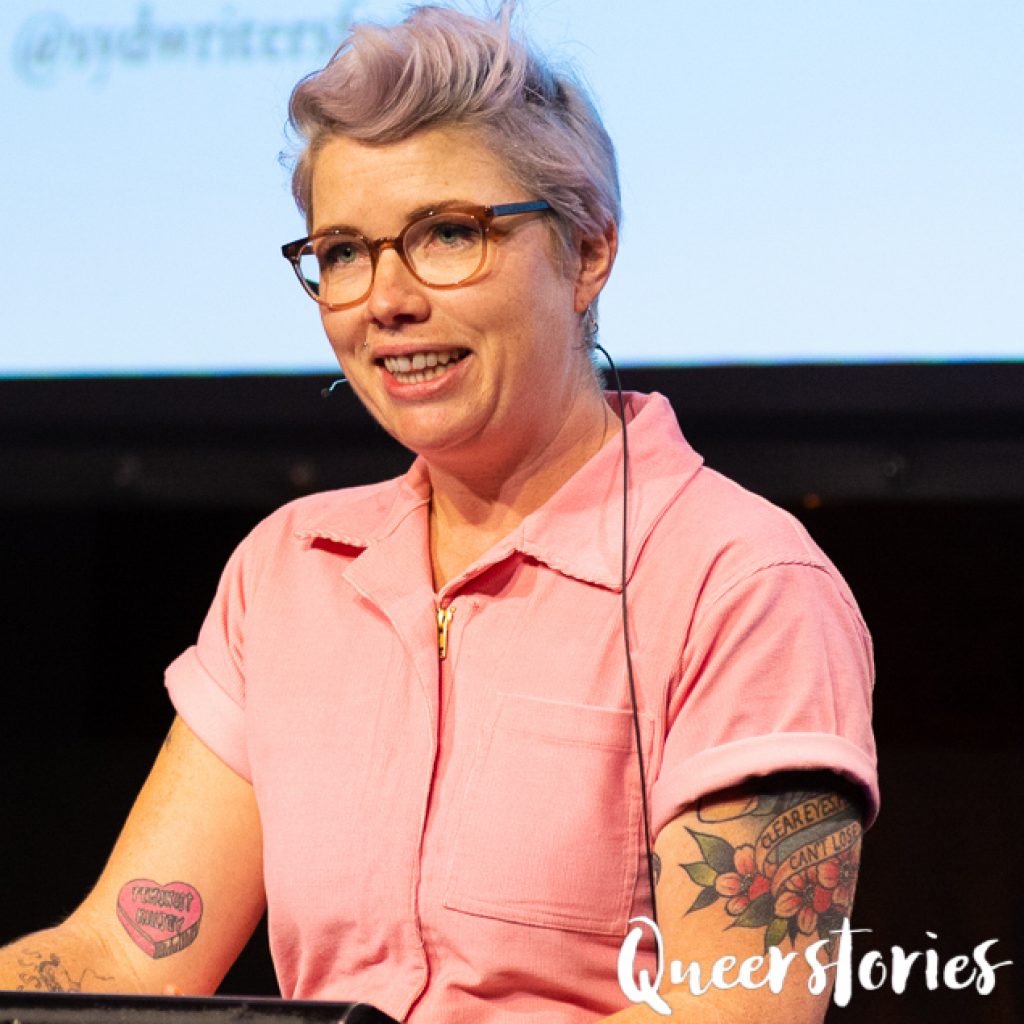 Clementine Ford is a freelance writer, broadcaster, and public speaker based in Melbourne. She is the bestselling author of the feminist manifesto Fight Like A Girl. Her most recent book is Boys Will Be Boys. This story was first performed in Melbourne, then at Queerstories for Sydney Writers Festival.

I haven’t always been an anxious flyer. As a child, I spent a lot of time in the air flying back and forth from boarding school. Spending 14 hours in the air didn’t bother me back then, and this was back when you only got one or two movies played on a tiny screen about three rows in front of you. To make it easy for everyone, that movie was always Turner & Hooch.

We did have Gameboys though, and they made it easy to burn through the hours spent between asking flight attendants for more food and marching importantly up to the cockpit to have a chat with the pilots. Flying was something exciting you did in between leaving the safety of home for the horror of institutionalised dorm rooms and bullying that happens after dark.

Once I reached the legal drinking age, flying became even more exciting for me, as I am sure you will not be surprised by. Pressing a buzzer and having a drink delivered while watching a movie – this time on the back of the seat in front of you – has always seemed like the height of luxury to me. My needs and wants are small and gentle.

For years, I flew with no problems. I sat happily in window seats, looking out at the clouds outside and whatever view of the land we might have. While others gripped their seat dividers with white knuckles, I found take-off exciting. Woohoo! Off into the air! Airports thrilled me, duty-free dazzled me, even the smell of the aeroplane made me happy. And then, the Great Crash of 2012. Not a plane crash. The anxiety crash. The mental health whoopsie. The descent into crushing fear and terror whenever I so much as even thought about a plane.

The first time I felt it, I was sitting on a ten-seater between Port Augusta and Adelaide. I had just spent five days walking around a national park, with nothing but wide open space to bask in and kangaroos hopping across the yonder distance. It probably stands to reason that being cooped up in a tiny sputtering can up in the sky would feel a little claustrophobic after that, but the sudden realisation that I was not only cooped up in that can but I was also stuck in it hit me real hard. I groped about in my wallet for the spare tab of Valium that I kept for emergencies and sat there resisting the urge to scream. It kicked in as soon as we landed, the Valium that is, which was good because I had to catch a bigger domestic flight back to Melbourne, and it turned out I was now terrified of that too.

Most people would be able to rationalise a little anxiety attack like that and get over it straight away. Not me. I love to commit myself. Luckily for me, the moment I get a little anxiety flip about anything, I clutch onto it with all my might and obsess about it forever. In the year since, I have sat white-knuckled on countless flights – because, luckily, my fear of flying coincided with the point that my work started calling me on frequent interstate visits – counting windows and heads to try to distract myself. I’ve ripped pages from inflight magazines to fold origami, drank more than I should to dull the fear and, when it felt really terrifying, rationed out my various anxiety medications. On the plus side, that’s always a good time.

Some flights go without a hitch. I’m up in the air and down before I know it, never a worry in sight. The next day, I march confidently back onto the plane, only to hyperventilate before we’ve even started taxiing down the runway. And, no, before anyone offers you helpful advice, I know that flying is safer than driving. The problem is, I’m not afraid of crashing or of technical failure. If both engines on an aeroplane go out, the plane will still be able to glide for at least 20-30 minutes before needing to land. That’s at least one episode of Schitt’s Creek.

If the cabin rapidly loses pressure, we’d probably all pass out from lack of oxygen before we knew anything had happened. You’re more likely to be killed by your partner than you are a terrorist attack #realtalk.

What I’m afraid of is being stuck on the plane. Once that aircraft takes flight, you’re in it for the duration. There’s nothing but metal between you and a very long drop, and there’s nothing you can do to get on the ground quicker. Sometimes, I worry I might rush to the front of the plane and try to throw open a door to jump out. Like pashing on with Isaac Dixon in Year 12, that’d definitely be something you’d immediately regret doing.

Don’t worry, by the way. You can’t actually open a door mid-flight. That’s why they arm them at the start, and I have looked into it.

When I was 23 weeks pregnant and drifting off to sleep one night, the thought popped into my head that there was actually an actual living, breathing, real-life baby inside me, a living creature flopping about. That was the start of ten weeks of crushing panic and anxiety, my old friend, as I willed myself closer and closer to the moment where I could get the damned thing out of me.

Actually diagnosed, not just that, “Oh, I really like things to be clean.”

I saw a therapist about it, explaining how scared I was at the lack of control, and how I talked myself off various mental ledges by telling myself that if it got really bad, if I really couldn’t handle it anymore, I could just go to the hospital and demand they take it out of me. “Well,” she said. “Why can’t you?”

I looked at her like she was the one who was mad, not me. “You can’t just tell them to take the baby out, not when it’s that big,” I said.

Sure you can,” she replied. “You might not end up doing that, but you can if you want to. You can at least reassure yourself that if you need to, that’s what you can do.”

“Gosh,” I thought. “I can do that? That changes everything!”

That therapist was a clever lady. Of course, she knew I wasn’t going to turn up to the hospital and demand they give me and my 28-week old foetus an emergency caesarean. But, she astutely figured out that my issue was with the lack of control I had over my environment and options.

Pregnancy was like being on a really, really, really… really fucking long flight. So, now I apply some of the same principles to managing my anxiety on planes. When I’m feeling anxious, I just tell myself, “Hey, if it gets really bad, you can just ask the pilots to land the plane.”

“Just ask them nicely.” And if nice doesn’t work, impress upon them just how essential it is that they find somewhere to land and get you down, just so you can just get a bit of fresh air before trying again. Essentially, this is my flight anxiety management plan now. Endless mental scenarios in which I’m plotting how to hijack a plane.

Daily Mail headline: Hardline Feminist Clementine Ford Shockingly Admits, “I am plotting to bring down an aircraft.” It gives me some small comfort, and that’s what you need in the space between take-off and when the drinks cart comes out.