The epic tale of Gertrude and Mildred.

This story was performed at Queerstories in Sydney and Melbourne, as well as at Newcastle Writer’s Festival and Ubud Readers and Writers Festival in Bali.

Claire G. Coleman is a Noongar woman whose family have belonged to the south coast of Western Australia since long before history started being recorded. She writes fiction, essays and poetry. During an extended circuit of the continent she wrote a novel, influenced by certain experiences gained on the road. She has since won a Black&Write! Indigenous Writing Fellowship for that novel ,”Terra Nullius”. Terra Nullius was published in Australia by Hachette Australia and in North America by Small Beer Press. Her second novel The Old Lie was published this year. 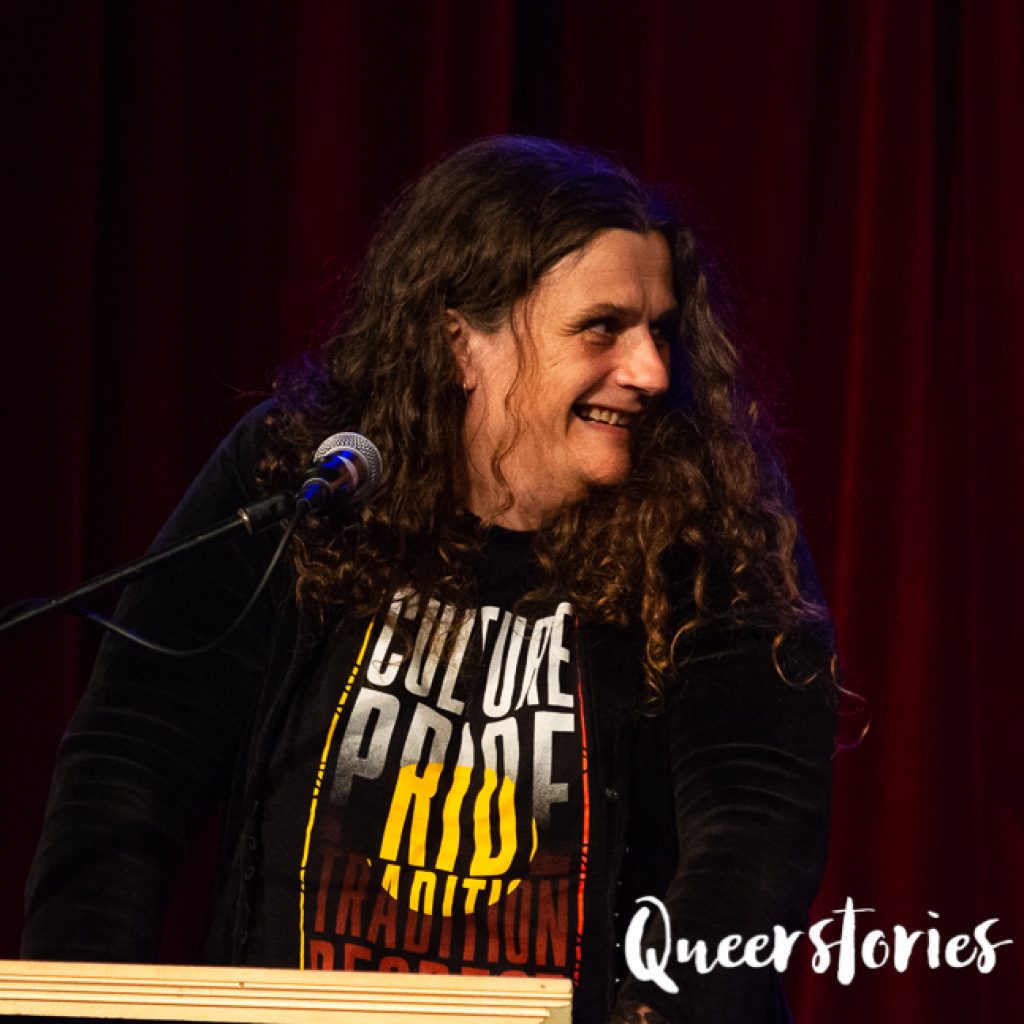 Claire G. Coleman is a Wirlomin Noongar woman whose family have belonged to the south coast of Western Australia since long before history started being recorded. She writes fiction, essays and poetry while mostly travelling around the continent now called Australia in a ragged caravan towed by an ancient troopy. During an extended circuit of the continent, she wrote a novel ‘Terra Nullius. She has since won a Black&Write! Indigenous Writing Fellowship for that novel and has been short and long-listed for a number of awards, including the 2018 Stella Prize and 2017 Aurealis prize.

Claire performed this story in Melbourne and Sydney, as well as at Newcastle Writers Festival, and I think it might be one of my favourites. Enjoy.

I want to tell the story of a pair of old ducks I used to know, Gertrude and Mildred were their names; or as I called them Gerty and Millie.  During my darkest times, when all hope seemed lost, when I could not see a way out of the quagmire I was living in, they were my best friends.  Their company kept me on the straight and narrow, as sane as was possible at the time. Almost certainly they saved my life.

I have to say though, I’ll be honest with you, they’re not particularly old, but they were literally a pair of ducks.

My parents visited Melbourne and my dad and I spent a whole weekend building a duck-pen, fenced-in chicken wire, we made a shed made of stolen pallets and old roofing tin, and we half-buried a baby bath with a brick in it at one end for them to stand on.

We went to Queen Victoria Market, Melbourne, when there were still live poultry sellers there, and chose them, Khaki Campbells, good layers, mission brown, mottled with green iridescence and copper. They were so very pretty. We brought them home in a cardboard box lined with a towel. We put them in their pen to get settled and gave them a good feed.

Don’t fucking judge me for having ducks in my back yard in Melbourne, for “enslaving” animals. If I had not bought them, adopted them, they would have gone the way of the other ducks in that duck pen, wrung necks and an oven or soup pot.

Now, Gerty was braver, she would bound out of their shed, where they were safe from the weather and from the foxes that always appear when ducks are around, looking for food and quacking her brainless little head off.  She would walk tall, quacking across the backyard, I think she must have been part runner duck, she had the right stance but she was way too chubby.  She would sit on my feet and demand to be cuddled, while Mildred went down the back yard and stared at me balefully

Gerty was the first to try all the new food, like the garden snails we collected from the veggie patch and threw in their pen.  Well, after a while she tried them, after a long while as both girls stared at the slow-moving things with shock.  When Gerty got brave and tasted a snail she made the most joyous sound I have ever heard from an animal, and soon there were no more snails in the yard. It was also Gerty who ate the frog, I saw the legs of the poor frog as they slipped down, still kicking down her throat. Ducks will be ducks and Gertrude was one hell of a duck.

Milly was more classically duck-shaped, if a little chubby. While Gerty was two legs of a Khaki Campbell, Milly was too round. Maybe she was partly some boxy meat-breed. She would stay in bed late, sitting on both their eggs, as late as she could.  Every day we got an egg from each, the clever girls.  Milly would never let me get near the eggs, if she could see sometimes I would have to leave and come back later as both girls were patrolling the yard looking for anything they could imagine was edible or a place to hide their eggs I couldn’t find.

I loved both my girls, though Gertrude was far easier to love.

There was a wetland nearby, populated with black-ducks and wood-ducks, crested teals and moorfowl.  Whenever another duck flew over it would be Gertrude who outstretched her wings and quacked like her life depended on it.  She didn’t try to fly, she did not escape to the wetland just over the wood-paling fence.

It was Millie who dug a tunnel into the long grass in the back yard, who lined a nest down that tunnel with feathers and straw, who held onto her eggs until I let her out so I thought one of my girls was off the lay.  It was Millie I found by the faint quacking, deep down a tunnel of grass, sitting on about forty rotten eggs.

She must have thought them fertile.

So, I shouldn’t have been surprised when I heard a strange noise one morning, went outside and saw Gertrude and Milly attempting to make little ducks. Yes, it’s a gay duck story.

Millie was on the bottom, splashing like mad in the half-buried baby bath, Gertrude was squatted on top, holding Millie by the neck feathers making that special noise ducks only make trying to make little ducks.

I won’t try, I won’t try and describe the sound, or I’m not going to imitate it. But once you hear it you will never forget it.

Gertrude was tough, protective, swaggeringly brave. She came out the door first, made sure Millie was ok, that it was safe to go outside. She loved me as long as I didn’t upset Millie, she would always take her lover’s side.  I could tell, as much as ducks could love they did. As much as Millie hated me, and I know she did, was as much as she and Gerty loved each other.  My friends would come to visit, not believing in the lesbian ducks until they saw them.

Now one night I could not find Millie when it was time to put them in the shed. I thought she must be in hiding in a hole somewhere. I thought she could like try look after herself but I left the gate, the shed door open so that Gertrude would lead her home.  The next morning I found her in a makeshift nest, dead.

Probably a fox had done it, or a cat,  I was devastated but not as much as Gertie who was hiding safe in their shed.

I did not know ducks could miss each other but Gertrude definitely missed Millie.  She became even more affectionate to me, she would not let me walk through the yard without giving her a pat and a cuddle.  She quacked.  A lot.

She passed away one night while I was away. My partner of the time was duck-sitting and not put her in her shed before nightfall.  It might have been a neighbours cat, you never can trust them.  I was distraught, but I gained some consolation.

Maybe somewhere, where I cannot go, there’s a deep, mucky pond, with all the frogs and snails a duck can eat (it’s obviously not frog or snail heaven.)

There, the lovers, Mildred and Gertrude, met again. There, Millie will sit every day on both their eggs, which will never hatch because I don’t think she really wants babies.

Hissing at anyone who comes too close, while Gertrude would strut like only Gertrude could, quacking at the top of her voice and eating everything that moves.  Because she is, eternally, Gertrude and she will forever love Mildred.