Poet Candy Royalle on the road to belonging.

Candy was an award winning writer, performance artist, poet, storyteller, activist, educator and vulnerability advocate. Candy’s album “Birthing the Sky Birthing the Sea,” a collaboration with the band The Freed Radicals, explored a fusion of rock and roll, funk, experimental soundscapes, hip hop, poetry with song. She published two solo collections, “Love Spectacular” and “Heartbeats,” and toured extensively in Australia, the UK, Canada and the USA, with performances at The Sydney Writers Festival, The Stella Awards, The Austin International Poetry Festival, The Latitudes Festival in Toronto and Woodford Folk Festival, to name a few. Her poetry and opinion pieces were published by Fairfax, SBS, Overland Literary Magazine, Mascara Literary Review, Peril Magazine, Australian Love Poems, RN’s Poetica, AIPF’s Diversity anthology, “Butch is Not a Dirty Word” magazine and many more. A new collection of Candy’s poems, ‘A Tiny Trillion Awakenings’ will be published by UWAP in November 2018.

Sadly, Candy passed away in June 2018 from ovarian cancer. She was remembered by her family and the LGBTQIA+ community for her strength, conviction and passion, and she will be deeply missed.

An extended version of this story is featured in the Queerstories book which can be ordered on Booktopia. 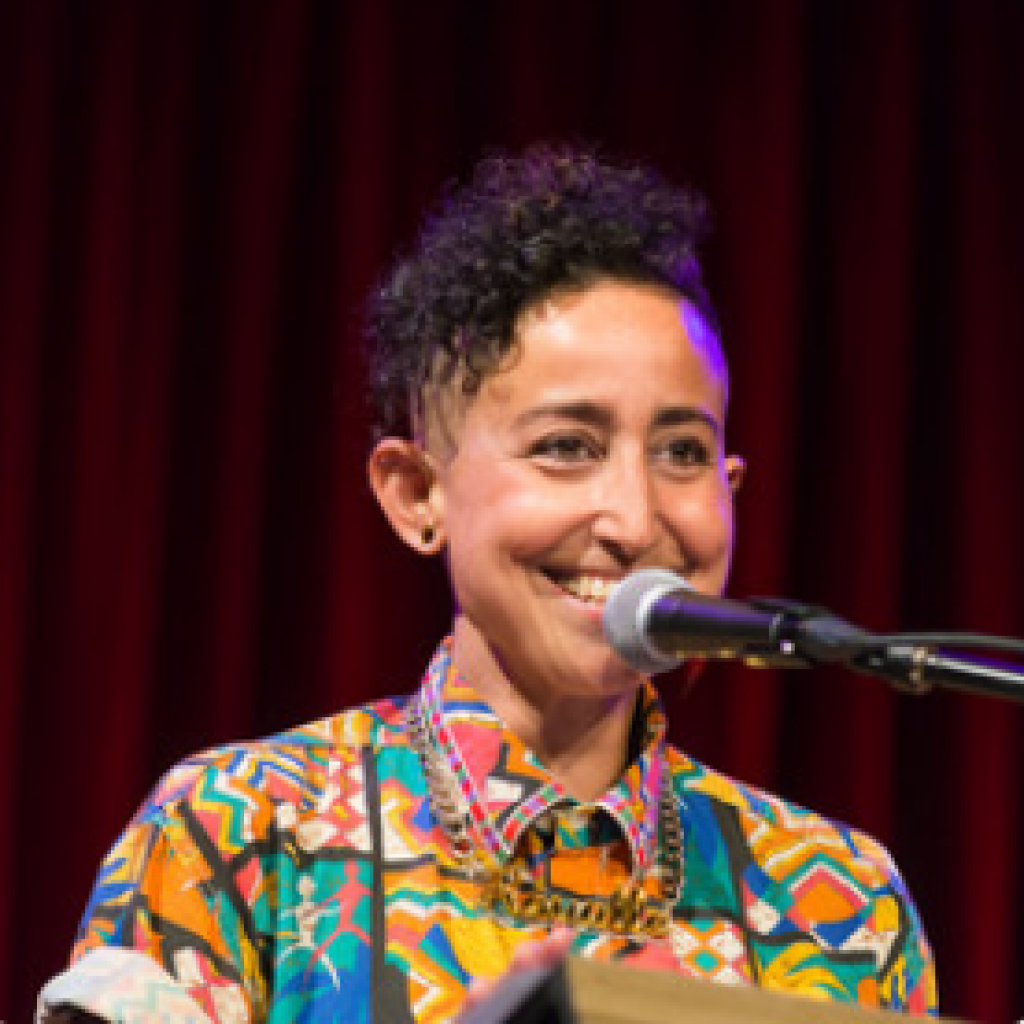 Hi. I’m Maeve Marsden and you’re listening to Queerstories – the podcast for the LGBTQIA storytelling night I host and programme in Sydney and Melbourne. This story was recorded at Giant Dwarf as part of my monthly Sydney event. This week – Candy Royalle an award-winning writer, performance artist, poet, storyteller, activist and educator. Candy’s performance at Queerstories was her first time on stage in six months, and she was welcomed with rapturous applause. Lovers of storytelling should check out Word In Hand, the spoken word night Candy programs in Sydney.

Stepping off the plane, walking through the airport, the smell that hits is like many developing countries I’ve visited. It’s dense, rich, unsterilised, and it summons thoughts of exotic holidays. This time, I’m surrounded by people talking in a tongue I am very familiar with. I can understand it, feel it. However, it is a constant struggle requiring summoning memories from childhood, walking through Customs and being spoken to in Lebanese, trying to gather the language required to answer his questions before in unfaltering English, he asks me the reason for my visit.

I’ve always existed somewhere in between, between cultures and colours, genders and sexualities, between spiritual and atheist, creator and imitator. Belonging has always been a theoretical idea for me, not a sensation rooted firmly in any place or person, any community or group. For as long as I can remember, since the smell of my dad’s lentil dish, mujadara, wafted through the house, ever since the painful, haunting and powerful voice of Fairuz played on the stereo, since my mother beckoned me into the kitchen and asked me to pour more olive oil over the tabbouleh while she mixed it with her hands, to taste it, tell her whether it needed more salt. I have felt the call of Lebanon in my gut.

Growing up in the bush, being surrounded by gum trees, red-bellied black snakes and huge hairy huntsmen felt as natural to me as picking parsley, or trying to decipher Arabic when my parents were talking in secret, or watching my aunties laugh as they belly-danced to terrible ’90s pop music. Those many worlds always felt like they fit together, the right sort of synergy. Still, I didn’t feel like I fully belonged. My family would talk of traditional things that seemed archaic, the path a life should take, the sacrifices one had to make in order to adhere to the codes of a culture that was a big part of me, just not all of me.

I was exposed to words outside the traditional, which created conflicting ideas of existence. At school, nothing felt right. There were boys whose affections extended to sleazy come-ons and reasons why we should get busy in the out of bounds area, while I was more interested in my latest girl crush. Most of the teachers didn’t understand that I wasn’t stupid, I just wasn’t engaged, but they’d made their minds up about me and many of my Lebanese, Greek, Maltese, and Italian friends early on.

I almost flunked my HSC completely, but Dad, who was determined I was going to be a lawyer, made sure I was straight onto a night-bridging course at Sydney Uni. Sydney Uni next to what used to be lesbian strip King Street, now gentrification central, which contained one of the most popular dyke bars in Sydney, arguably Australia. Back then, the Bank Hotel…

..was dark and grimy, and butch dykes would bring their own pool cues.

I always aspire to that but haven’t gotten my own. I was introduced to a whole other world I’d spent my teens fantasising about. Out went night classes and law altogether. In came rendezvous with lesbians who taught me the ropes and showed me what homo Sydney looked like. It felt good like they’d almost made it home, almost. But there weren’t that many like me, and I didn’t know how to find them. At that point, I started to believe I was always going to exist in some sort of periphery.

Time past, I moved through so many different types of me: The corporate me before my full-blown social awakening, the artist me, the traveller me, the activist me. Every time I found new brimming communities but I still felt like an outsider. Finally, in November 2015, I couldn’t ignore my gut’s pull to Lebanon anymore. My then-partner Maria and I spent three weeks travelling around a country small than Sydney. We spent days and nights in Beirut, where brand new four-wheel drive Porches battle it out in tiny alleyways with 30-year-old Mercedes. Horns rang out incessantly like the whole city drove with one palm on the horn, the other out the window with a cigarette.

As pedestrians, we had to be careful not to catch our foot on protruding cement or steel from buildings that were being demolished, their scarred bullet holes and mortar shell histories crumbling to the ground to make way for extravagant residences that only oil-rich Saudis could afford. We heard the call to prayer multiple times a day wherever we were, and it was a way for us to assess the time.

We gave as much money as we could to thin, crying Syrian and Palestinian children to assuage our guilt. We visited the Hezbollah Museum, which is something like a war monument and theme park all at once… it really is the most bizarre place… where we walked through tunnels of the Resistance and saw Israeli tanks with knots in their gun barrels. We stood on ruins that were 9,000 years old, ate food made from recipes as old as that too. We talked to people about politics and religion, civil war, survival, refugees and perceptions of the West.

We had just driven out of Beirut towards the south when the bomb blast hit and killed 43 people, people who laugh, and fuck, and dance, and work, and play, and live just like us. But, there was no button on Facebook to click to say we were safe, or that our new friends were safe because somehow those lives matter less, that country matters less.

Maria and I decided against the advice of many to do an 80-kilometre trek across the north of Lebanon. It was incredible. Over five days, we climbed challenging mountains from the peaks, of which you could glimpse the sea, down into tiny villages where acorn trees, large and leafy, shaded ancient churches only big enough to fit a handful of people, still tended lovingly by local believers. We entered cedar forests that have been standing for thousands of years, and I sat on the branch of a cedar that was estimated to be 2,000 years old. I asked it to hold me for a moment. Then, I held it, wrapped my arms around it, exchanged light with it, felt it hum.

We walked into the holy Qadisha Valley where hermits reside in 12th Century monasteries built into the mountainside. In fact, we met one hermit who took a liking to Maria and said to her, “This might be paradise, but with you, it would be heaven.”

I think he’d been alone a bit too long. We ate apples from abandoned orchards, figs by Roman roadsides. We met iPhone-holding shepherds, shotgun-toting hunters who were fierce at first glance with their camouflage gear and big beards, but who would break into shy smiles and say in thick accents, “Welcome to Lebanon.” We stayed with local villagers who fed us until we were sure we might actually explode. All of this: The generosity, the openness, the connection to the land, sky, sea, city, and still I was an outsider. To them, I didn’t belong.

We met an amazing couple in Beirut, two women raising an adopted child in a country where it is illegal to be gay. They are trailblazers, women who are just living as they feel they should be, carving a path for those in the future. They are brave, courageous. They do it out of their love for each other, the love for their child, and their love of Lebanon.

On our last day, the invited us to their sunny Hammara apartment for breakfast. We were joined by two of their queer female friends: Carole, a Palestinian filmmaker, and Aaliyah, a psychotherapist. We ate man’oushe with za’atar, halloumi and olives. We drank cup after cup of coffee, and we talked about what it is to be queer and Lebanese. We discussed how simply living our lives in this way, whether out or not, was a form of resistance against perceived ideas of who we are and who we should be, within our cultures, yes, but mostly against the continued colonisation and stereotypes perpetuated by the West.

It hit me then though, it hit me so hard I experienced a really beautiful tearing in my chest, and opening I didn’t even know existed. I listened to these fierce, intelligent, intellectual women, each doing their fit of existing, fighting, resisting from the edges, and I felt it. I felt like I belonged, finally, like this was my tribe. I thought about how I am surrounded by bold, queer, Arabic women in Sydney, online, around Australia and the world, who’ve also expressed their feelings of not belonging. I thought about how lucky I was to have those connections, to be sisters with a global group who make the borderlands a place of belonging.

It dawned on me that we occupy these fringes together, that we utilise things like art and activism to create a place of belonging within the margins, and can revel in what it means to be an outsider who belongs.